Shami Chakrabarti: Theresa May should prove she is feminist and liberalise Northern Ireland abortion

Theresa May should prove she is a feminist who can do more than just unveil statues and liberalise abortion law in Northern Ireland, a Labour frontbencher today said.

Shadow Attorney General Shami Chakrabarti said the UK Government should intervene to change the law immediately rather than holding a referendum.

And the unelected peer said the human rights of women living in the region should trump democracy.

But Mrs May was warned by her DUP backers it would be ‘hypocritical’ for Westminster to step in to make abortion easier as it is a devolved matter.

Speaking to the BBC Radio 4 Today Programme, Baroness Chakrabarti was asked directly if she wants referendum or a legislative change.

She said: ‘A legislative change – this is an issue of fundamental human rights and in fact the situation in Northern Ireland is currently putting the United Kingdom government in breach of its international human rights obligations, according to the UN.

‘So, we are calling on Theresa May – a self-identifying feminist – to negotiate with the parties in Northern Ireland and then to legislate without further delay.’

She added: ‘Theresa May, as a self identifying feminist, needs to say, yes I unveil statues of suffragists in Parliament Square, but the test of my feminism will be whether I guarantee fundamental human rights for women.’ 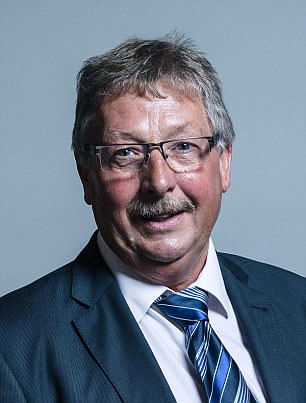 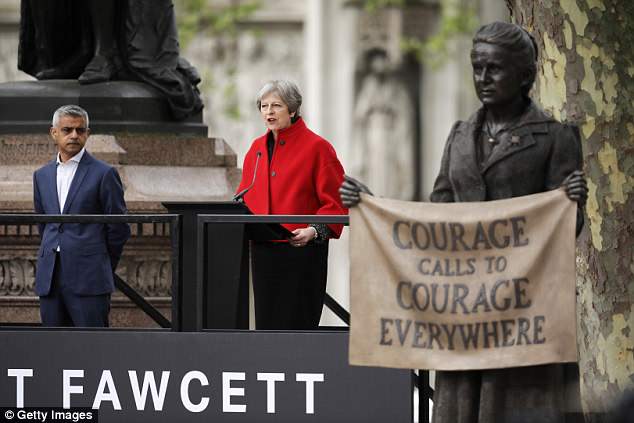 The row erupted after the Republic of Ireland voted at the weekend to liberalise abortion laws in a landmark referendum – leaving Northern Ireland with the most restrictive legislation in the UK.

MPs across the political divide have urged Westminster to back legislative change in the region as the devolved Assembly has been suspended for over a year amid a political row.

But the PM is dependent on the DUP’s 10 MPs to prop her up in power and the small Northern Irish party is strictly against any change in the law.

If she defies her backers they could pull the plug on their support and collapse her Government.

Law could be named after ‘martyr’ Savita

The new Irish abortion law may be named ‘Savita’s law’ after the woman who became a martyr for the cause of legalising abortion.

Savita Halappanavar, pictured, was a 31-year-old dentist who was denied an abortion in 2012 after her first pregnancy ran into difficulties at 17 weeks.

Medics at University Hospital Galway decided that a miscarriage was certain – but refused to terminate the pregnancy because the heart of the foetus was still beating. 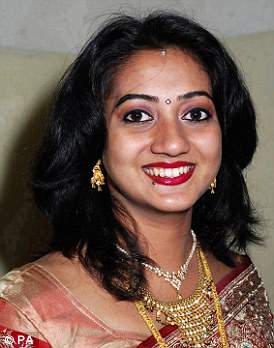 Savita Halappanavar, who died in 2012

Her husband Praveen said his wife had said she was in pain and had asked for a termination. He said she was told that ‘unfortunately it’s a Catholic country’.

Mrs Halappanavar, a Hindu, developed an infection and then septic shock, and died seven days after being admitted to hospital.

Her husband said there was no doubt that she would have lived if a termination had been allowed. An inquiry found that there had been ‘an over-emphasis on the need not to intervene until the foetal heart had stopped’.

The death provoked protests and also led to the Protection of Life During Pregnancy Act 2013, which allows a termination if there is a ‘substantial risk to life, including risk of suicide’.

Mrs Halappanavar’s father Andanappa Yalagi told the Irish Times yesterday that the new law ‘should be named for her’.

But Baroness Chakrabarti dismissed concerns that intervention directly by the UK government would flout devolved democracy.

She said: ‘This is an issue of fundamental human rights.’

When asked what about democracy? ‘This is one of these great big existential debates – democracy o the rule law.

‘But you can’t have democracy without fundamental human rights and the women of Northern Ireland have suffered for long enough.

There are clear signs that times are changing that the attitudes of people on both sides of that border on the island of Ireland are changing. The women must get the rights they deserve.’

She denied that Labour is trying to take advantage of the issue to force a rift between Mrs May and her DUP allies which could force the collapse of the Government.

Challenged directly about if this is their aim, she said: ‘No, not at all. If you look at our manifesto we have a clear commitment to work with the assembly in northern Ireland to extend abortion rights.’

Dawn Butler, Labour’s shadow Minister for Women and Equalities, said: ”This is an injustice. No woman in the UK should be denied access to a safe, legal abortion.

‘Labour’s manifesto commits to working with the Northern Ireland Assembly to bring about these changes and we want to see the Assembly reconvened to make such important decisions, but nearly eighteen months on, women in Northern Ireland should not have to suffer in its absence.

‘We call on the Government to support legislation to extend abortion rights to Northern Ireland. Labour is looking at legislative options for achieving this and urge the Conservatives to work with us to make it law.’

But the DUP have warned the PM they will not be bullied into the change.

Mr Wilson, the DUP’s Brexit spokesman, told BBC Radio 4’s Westminster Hour: ‘I find it rather hypocritical. If there is going to be interference in the affairs of northern Ireland then it needs to be done in the context of direct rule.

‘But you can’t pick and choose what parts of direct rule you want, and if the Government wants to go down that line then the Govenmrent will have yto make a decision that the Northern ireland aAssembly is not functioning and all the powers should be brought back to Westminster….

‘But you can’t pick and choose  when you decide which parts of the devolution settlements you want to lave with the administration and which parts you want to take back just because you don’t like the outcome.’

Mrs May is facing a tricky balancing act between those in her Cabinet who back a change in the law and the DUP who oppose it. 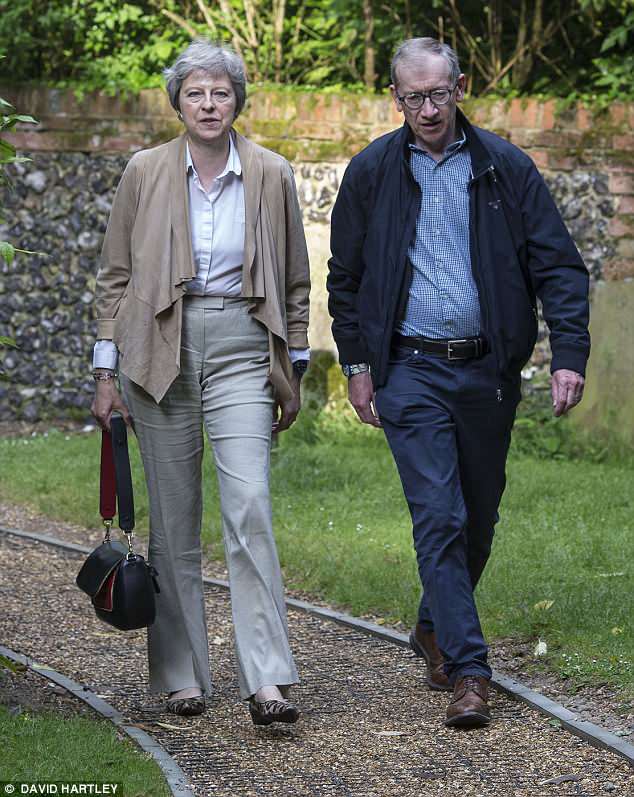 A group of cross party MPs acre hoping to table an amendment to the upcoming domestic violence bill to force through the change.

They say that as Stormont has been suspended for nearly 18 months the UK govenrment can step in to intervene.

But there are doubts over whether the MPs will be allowed to table an amendment on a devolved issue.

She told MailOnline: ‘ On this issue, Northern Ireland is a devolved administration. This means that on economic and social issues, the elected representatives make their own decisions.

‘If the British Government step in on this issue, where does it stop?

‘Those who are calling for the government to ‘push forward’ are in fact seizing upon an opportunity to create mischief, knowing full well that should the Government do so, our formal relationship with the DUP would be under threat and the government, and the Brexit process, destabilised as a result.’

What is the Irish law now?

The referendum concerned the eighth amendment to the Irish constitution, which was introduced in 1983 and gives equal rights under the law to mothers and unborn children.

The constitution allows abortion when a woman’s life is at risk, but not in cases of rape, incest or fatal foetal abnormality. It has led large numbers of Irish women to travel to Britain to have abortions – an estimated 170,000 since 1983.

What will happen after the referendum result?

After voters backed liberalisation by almost two to one, Taoiseach Leo Varadkar promised rapid legislation to bring Irish abortion law in line with other Western nations. A new law should be in place by the end of the year, allowing abortion in the first 12 weeks of pregnancy and, under exceptional circumstances, up to the 24th week.

How will Northern Ireland be affected?

A pro-choice law in Ireland will leave Northern Ireland isolated in its resistance to abortion. The 1967 Abortion Act which legalised abortion in the rest of the UK does not apply in Northern Ireland, where powerful religious lobbies hold influence. In Northern Ireland, the law dates from 1945 and permits terminations only to save the life of the mother.

While women from Northern Ireland can travel to England for abortions – and will be able to have one in the Republic – they are not entitled to free abortions on the NHS in England.

Can the PM pass a law to make abortion legal in N Ireland?

It would be extremely difficult to do so. Firstly, abortion is considered a devolved matter to be settled by politicians at Stormont. Secondly, her Government is dependent for its majority on the votes of the ten DUP MPs at Westminster. The DUP is against legalising abortion.

Why is this a problem for Mrs May?

She is under pressure to allow a free vote at Westminster on Northern Ireland abortion reform. Those backing change include ex-ministers Amber Rudd, Justine Greening, Nicky Morgan and Maria Miller, and current minister Penny Mordaunt. Northern Ireland Secretary Karen Bradley is said to be privately in favour of a new law.

Labour MP Stella Creasy is thought to have the backing of 130 MPs for an amendment to a new domestic violence Bill which would allow abortion in Northern Ireland.

Those who want Mrs May to change Northern Ireland’s law must face the risk of the DUP bringing down the Government and opening the door for a general election – which could let Jeremy Corbyn into No 10.

Why can’t Stormont handle the abortion argument itself?

Since the collapse of the power-sharing agreement between the DUP and Sinn Fein in January 2017 there has been no local executive and power has been exercised from Westminster. On Saturday Sinn Fein leaders proclaimed that ‘the North is next’. They believe that a new law should be decided in Northern Ireland.

DUP MP Ian Paisley said yesterday that ‘NI should not be bullied into accepting abortion on demand’.