Shane Richie ‘WILL return to EastEnders after two year hiatus’

After speculation over whether he will or won’t return to BBC soap EastEnders, Shane Richie will indeed grace the streets of Walford again as Alfie Moon.

The actor, 54, is set to reprise his role on set within a matter of weeks, to shoot new scenes, according to The Sun.

This will be the first time the former Queen Vic landlord will be back on the stalwart soap in over two years.

Back for more? After speculation over whether he will or won’t return to BBC soap EastEnders, Shane Richie will indeed grace the streets of Walford again as Alfie Moon

It’s perhaps not shocking news to some fans of the show, who have been hoping for a return for Alfie after his on-screen wife Kat, played by Jessie Wallace, made her comeback on Wednesday night’s edition.

A source told the publication: ‘The writers knew viewers would ask when Alfie would be back too, so they’ve managed to convince Shane to return.

‘It won’t be long-term but he’ll play a role in a number of storylines in the coming months.’

Despite not being on EastEnders for quite some time, Shane and Jessie, 46, respired their roles for a Kat and Alfie spin-off called Redwater. 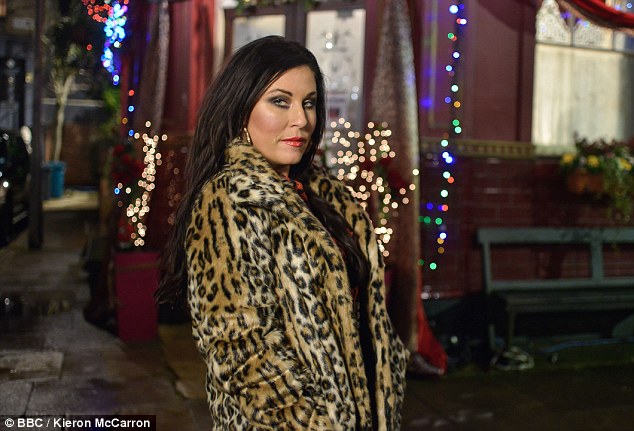 She’s back again: It’s perhaps not shocking news to some fans of the show, who have been hoping for a return for Alfie after his on-screen wife Kat, played by Jessie Wallace, made her comeback on Wednesday

Set in Ireland, the show aired last year on the BBC.

The show will remain as canon in the EastEnders universe, with Kat’s apparent death at the end of it being addressed when Kat turns up at her own funeral.

Confusingly, Shane appeared on ITV’s Lorraine this week and declared that he wasn’t planning on returning to EastEnders any time soon.

This week, fans will see Kat furious to discover Mo Harris (Laila Morse) has lied about her death, with residents also furious their fundraising efforts were all for nothing. 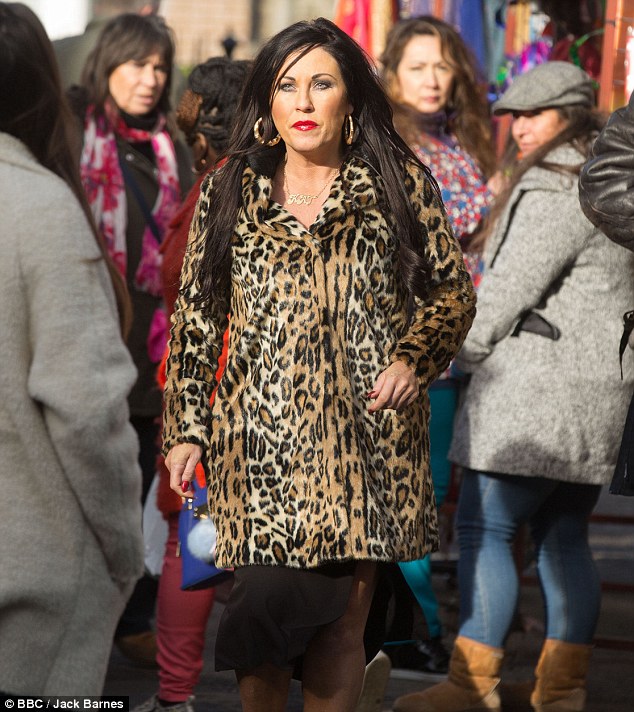 Look who’s back in town! Shortly before her outing, new images appeared to show her character Kat Slater making an extremely loud return to EastEnders , as she left residents shell-shocked by turning up to her own wake 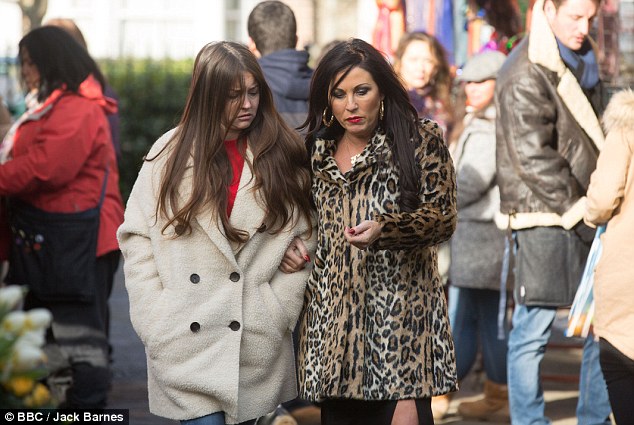 Burying the hatchet! Wearing her signature leopard print and red lipstick, Kat will make an entrance into the Queen Vic pub, though her reason for returning remains shrouded in secrecy

The reason for returning remains shrouded in secrecy.

Mo told Kat’s cousin Stacey (Lacey Turner) and the rest of her family that she had died in Ireland, leading the entire Square to come together to raise money for her funeral.

In Friday’s show Mo told Stacey: ‘She was on a boat… and then she fell off. It was at night weren’t it. They could hear her, but they couldn’t find her. 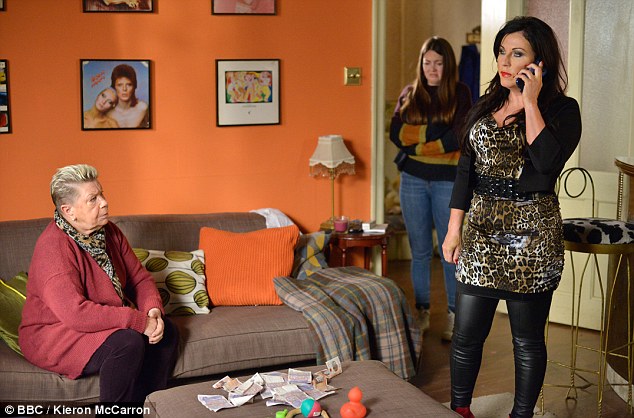 What’s she doing here? Kat’s return to Albert Square will be shrouded in secrecy, as she arrives back from Ireland furious to find out Big Mo has lied about her death 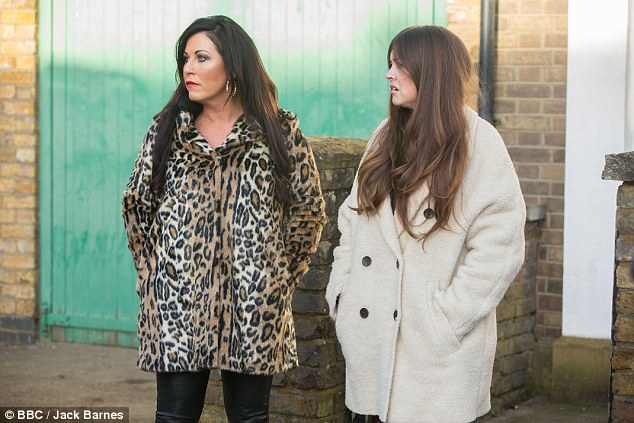 Reunited: Following Stacey’s devastation at Kat’s ‘death’ she will be left reeling to see her cousin is very much alive

‘They was looking for her then all of a sudden they spotted her. It was too late.

‘Alfie wasn’t there, him and Kat had a bust up, he went off with the kids and no one’s seen them since.’

Following Kat’s return, the entire Slater family will face a backlash from the Square as they drummed up the cash to pay for her funeral, leaving the feisty beauty to try and smooth things over. 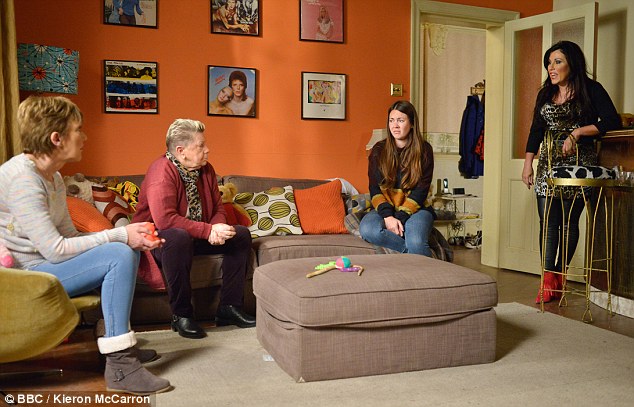 Tension: Kat will be furious to discover that Mo has lied about her death, along with Stacey’s mum Jean (far left played by Gillian Wright) who will also return to the Square 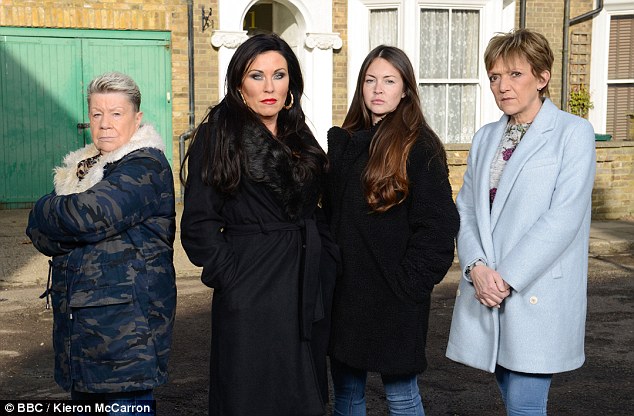 Family reunion: EastEnders bosses are tight-lipped about the Slater family’s dramatic new story line, so fans will have to wait and see

Actress Jessie Wallace told The Daily Mirror: ‘She turns up in a cab and sees a leaflet on the floor saying ‘Kat Slater’ about her own wake.

‘So she’s got to clear up all the damage a certain person has caused by saying Kat’s dead.’

Fans will have to wait and see why Kat has decided to return to Walford, why Mo lied about her death, and most importantly, why she is without her children or husband Alfie.