Shane Richie’s son has hit out at AJ Pritchard fans for attacking him on social media, less than an hour after his father became the latest star to exit I’m A Celebrity… Get Me Out Of Here!

Shane Richie, Jr has been an outspoken critic of the former Strictly Come Dancing professional following his spat with ex-EastEnders star Shane over his poor attempt at washing up in the show’s north Wales camp.

And taking to Twitter on Thursday evening, the 28-year old admitted AJ’s followers had immediately targeted him following his dad’s semi-final departure.

Feud: Shane Richie’s son has hit out at AJ Pritchard fans for attacking him on social media, less than an hour after his father became the latest star to exit I’m A Celebrity… Get Me Out Of Here!

Responding to the post, one follower appeared to forget that AJ lost his place on the show 24 hours before ex-EastEnders star Shane, writing: Bruh its not even about being ‘Ajs fan’ it’s about you being horrible and jealous.

‘More people backed aj over your dad and you can’t handle that. Honestly just grow up mate your dad didn’t even win lol.’

Pointing out the obvious gaffe, Shane, Jnr replied: ‘I mean they clearly didn’t.’

Awkward: Responding to Shane, Jnr’s post, one follower appeared to forget that AJ lost his place on the show 24 hours before his ex-EastEnders star father

He’s off: Shane exited the north Wales camp at the semi-final stage on Thursday evening

Shortly before AJ’s elimination on Wednesday evening Shane, Jnr voiced his dislike for the dancer while dismissing claims made by AJ’s brother Curtis that his father is ‘lazy.’

He tweeted: ‘I can’t help it, AJ winds me up. He does. I don’t really know why either #ImACeleb.’

He later wrote: ‘Can I just say I don’t agree with some of the comments said about AJ tonight, I’m not actually that bothered. 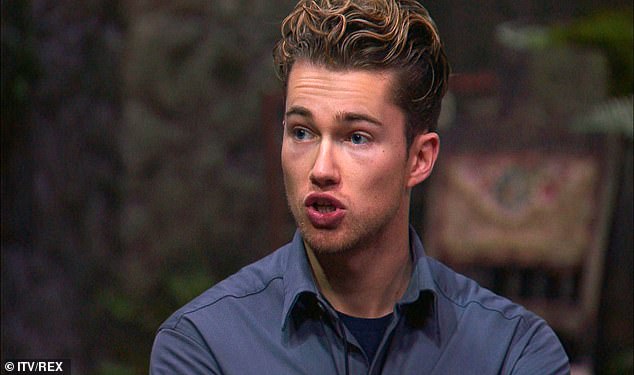 Loggerheads: AJ and Shane locked horns during their time together on the latest series of I’m A Celebrity… Get Me Out Of Here! 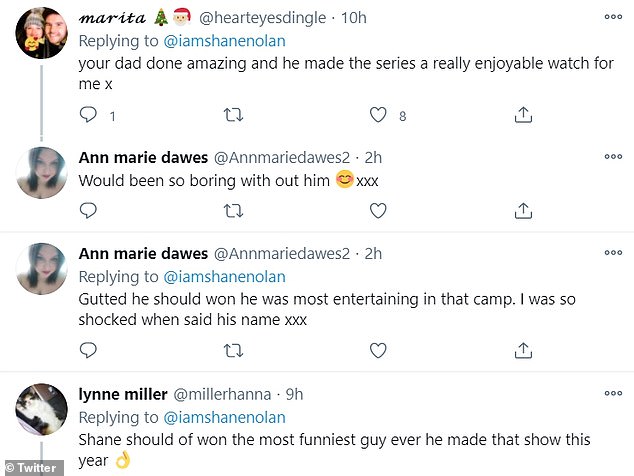 Popular: Many fans admitted they were ‘gutted’ to see Shane leave due to his lighthearted antics in camp 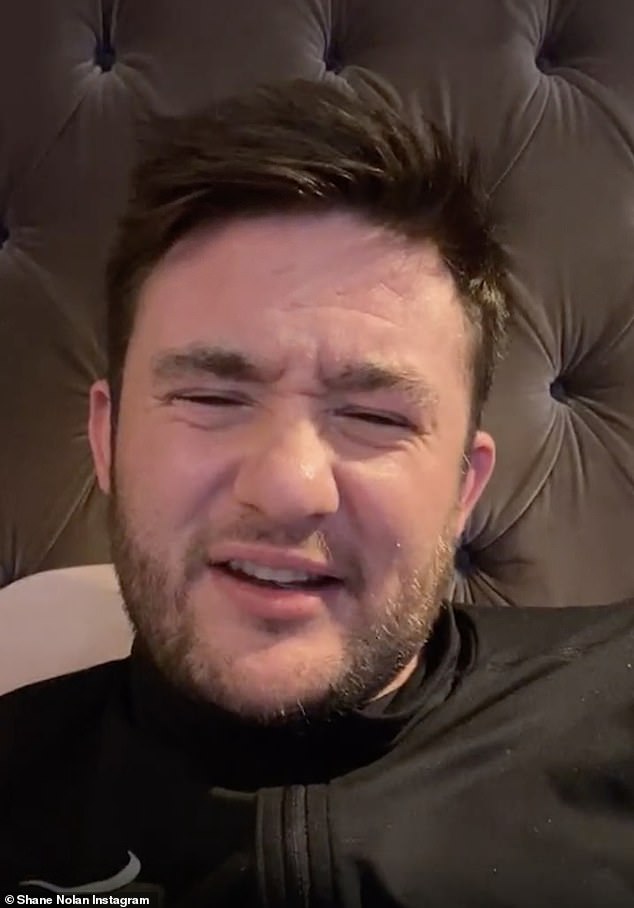 Winds me up! Shane Jnr previously took to Twitter on Wednesday evening, where he continued to voice his dislike of AJ just minutes ahead of his elimination from I’m A Celebrity

‘He seems sound but just not my cup of tea and I’m sure he wud feel the same. Now move on folks.’

The article in question referred to a podcast chat, during which, Curtis said: ‘I’ve noticed with Shane and AJ, is there something going on there?’

His mum Debi replied: ‘You will understand this. Shane is a real character and I would say Shane maybe hasn’t had to be in a position where he’s had to clean up after himself or wash his dishes.’

‘So has Shane been lazy then?’ Curtis questioned, later adding: ‘If you’re going to do a job do it properly. So I’m just going to say it then, Shane has been lazy basically. He ain’t pulling his weight around and ain’t doing his chores.’ 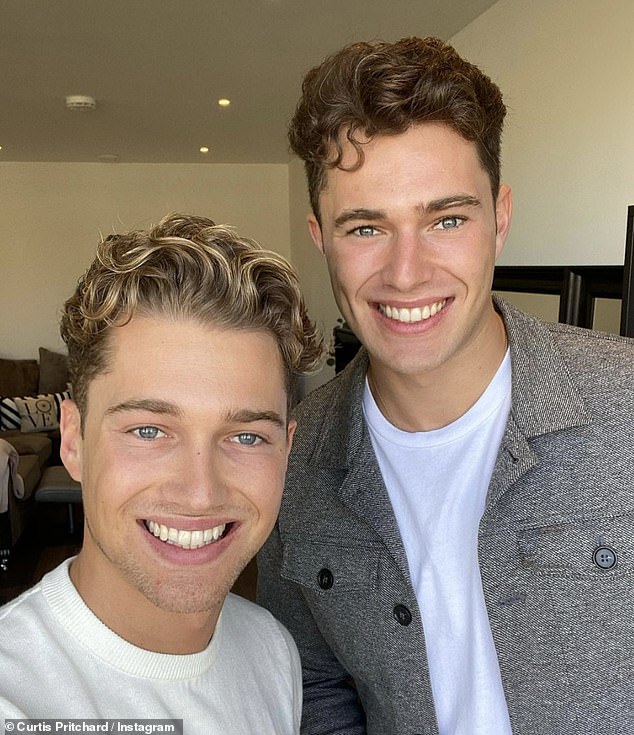 Calling it out: Shane Nolan also hit back at AJ’s brother Curtis after the dancer labelled his father – who is still in the welsh castle – ‘lazy’

Shane Jnr previously branded AJ a ‘little b***h’ in a furious Instagram video following his father’s row with the dancer.

He also said the Strictly dancer should ‘shut up’ after he argued with his father in the camp over dirty pans.

‘AJ was a little b***h when he was talking about him. Look how clean I’ve got them. F*** off mate, got a dishwasher mate, back off. 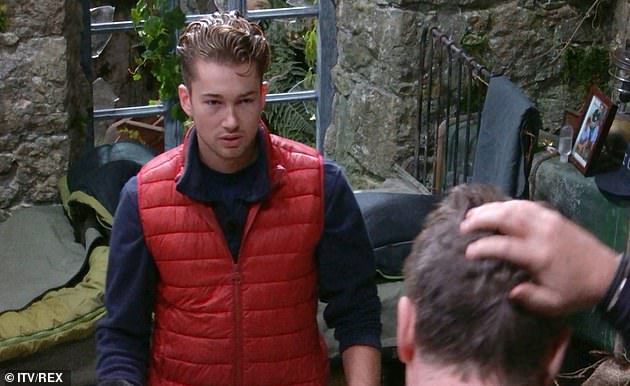 ‘This is where people get p**** with each other!’: AJ and Shane had a tiff over dirty pans 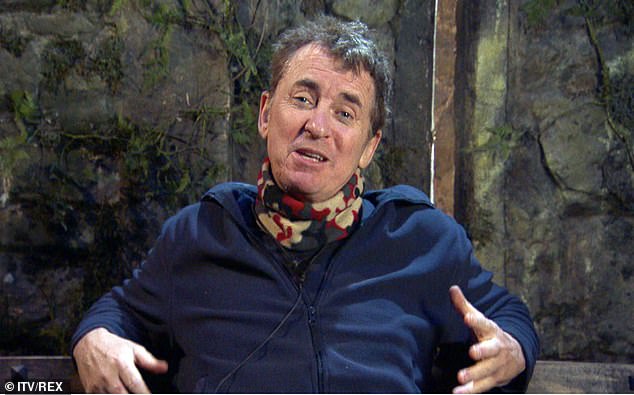 He later told AJ to ‘shut up you little girl’ before saying: ‘Oh he didn’t do the washing up properly, so f*****g what? Jesus get a life.

During his I’m A Celebrity eviction interview on Wednesday night, AJ admitted he found it frustrating when the EastEnders’ star didn’t clean the campmates’ tins properly, meaning they were covered in grease and grime when it came to meal times.

AJ explained: ‘If you’re going to do a job do it properly, and hygiene, yeah you know, come on.’ 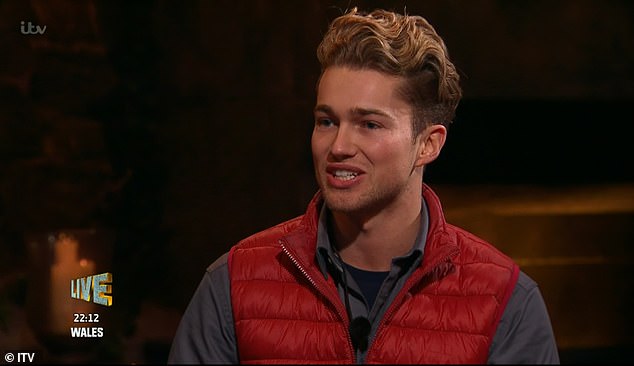 Hygiene: AJ spoke about his cleaning tiff with Shane Richie during his eviction interview on I’m A Celebrity on Wednesday night 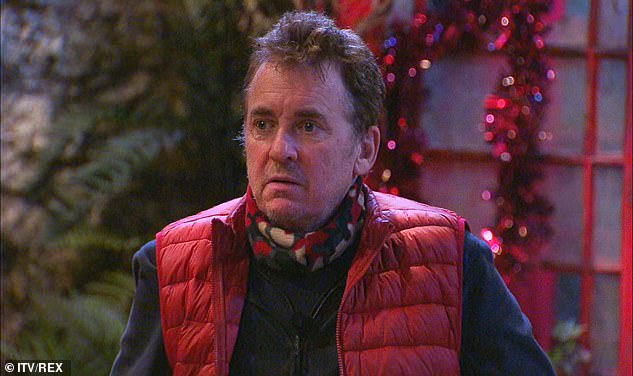 Unimpressed: The dancer admitted he found it frustrating when the ex EastEnders’ star didn’t clean the campmates’ tins properly

When asked by host Dec if it was frustrating when people didn’t pull their weight, AJ replied: ‘Maybe… I’m not going to lie. I think if you’re going to do your job do it properly, it’s much better between everyone else.

‘The thing is to resolve problems and not let them fester. Shane was really ill at times, you have highs and lows. Everybody was positive. It was rewarding.’

I’m A Celebrity… Get Me Out Of Here! continues on ITV1 at 9pm.