Australian cricket legend Shane Warne has sparked debate by asking if he’s allowed to home quarantine upon his return to Australia for the Ashes.

Warne, who has been in England for several months as a coach to the men’s London Spirit team, pitched the idea on Twitter on Friday.

He called hotel quaratine ‘inhumane’ and suggested he should be able to isolate at home as he is double vaccinated.

Many slammed the sports star for his comments, telling him he needed to ‘get a grip’ and realise how lucky he was to even be able to travel during the pandemic.

He sent his first Tweet on Friday evening (pictured), asking whether he was able to home quarantine on his return to Australia from London as he is double vaccinated

‘Thanks for having me London! Time to head home for the Ashes now. Question. Can I do home quarantine in Victoria now as I’m double vaccinated or is it still the inhumane 14 day hotel quarantine in a tiny little room as all residents returning home have had to do,’ the tweet read.

The former cricket captain doubled down on his argument after some backlash, replying to a commenter who said the hotel rooms provided are hardly miniscule.

‘Just stating a fact. And asking the question. I had a 4x3m room with a window that didn’t open and not allowed outside my door for 15 days, 14 nights. So no fresh air at all or exercise – that is inhumane.’

Warne’s comments sparked a heated debate on social media with many Twitter users saying he should be grateful he is allowed to return back home to Australia at all. 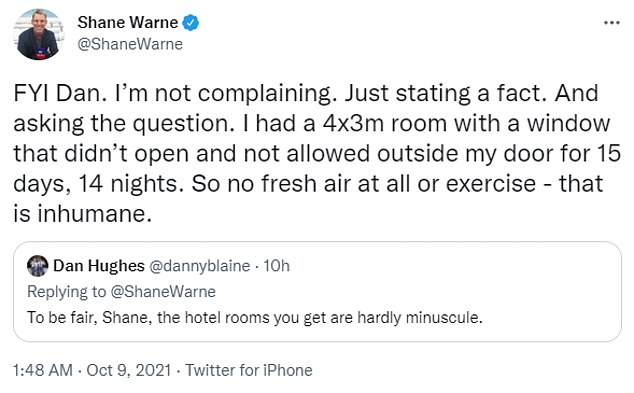 He followed his first Tweet up replying to one commenter, saying he wasn’t complaining about the situation but ‘stating a fact’ that the hotel quarantine conditions are ‘inhumane’

‘Mate, count yourself lucky you can get home. There are many Australians who aren’t in such a privileged position,’ wrote one Twitter user.

‘You really need to get a grip mate. If you think having food and shelter is inhumane then you need to get out of your self imposed bubble and look around the world at what other people experience to get a true appreciation of what inhumane is,’ said another.

‘Really Shane, you get to travel the world while others just wanna get home. Read the room,’ commented one.

‘Oh to be able to travel the world and get paid doing something you love and complain about spending time in a hotel where you can watch endless sport, netflix and play online poker,’ said one jesting comment.

However, there were some users who agreed with Warne, saying they have struggled in lockdown and quarantine and agreeing hotel quarantine needs to end. 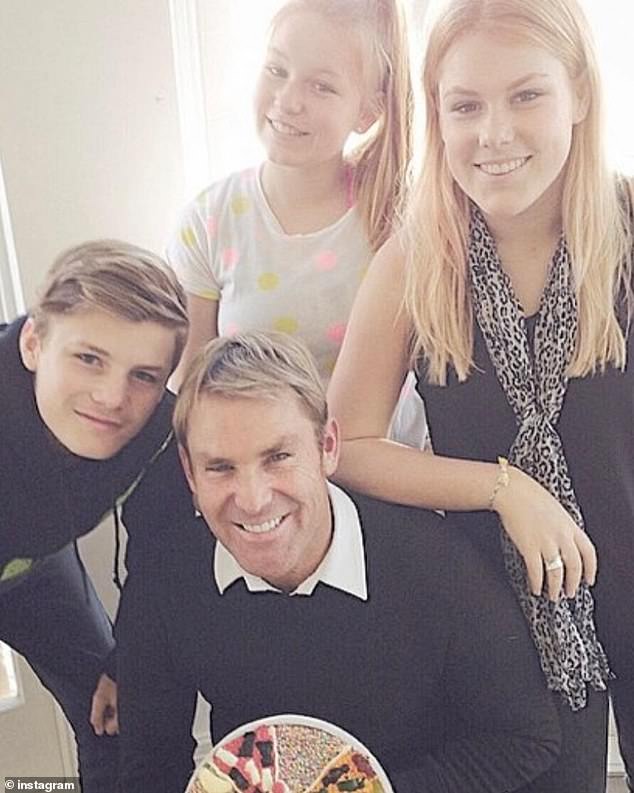 While some commenters sympathised with the former cricket captain (pictured with his family), many said he should be grateful he is able to return to Australia at all when so many Aussies are trapped overseas apart from their families

‘It’s really difficult to be in isolation in the comfort of your own home. Just imagine how it will be for a person at a hotel room irrespective of the size,’ said one in support of Warne.

Warne has been in England for several months as a coach to the men’s London Spirit team and contracted Covid-19 in August, only experiencing mild symptoms.

He has also previously urged England players to not miss the upcoming Ashes test series in Australia due to the strict quarantine regulations, with arrangements for families being one of the main areas of concern for players. 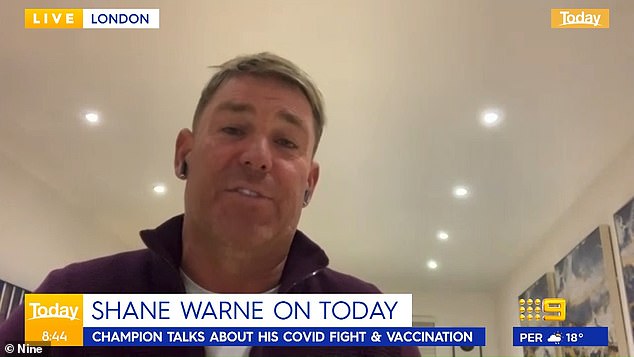 Warne (pictured) has been in London coaching for the past few months and contracted Covid in August, only experiencing mild symptoms

Speaking to UK radio show talkSPORT this week, Warne said there should be no excuse for players not to travel.

‘What I’ve heard is England are being given a resort for their 14 day quarantine – swimming pool, golf course and everything for their families,’ he said.

‘I’d be disappointed if any of the players pulled out because they can have their families there, have a resort and be there for a holiday.’