Shang-Chi And The Legend Of The Ten Rings made a splash at the box office following its Friday debut, as it is projected to rake in over $60 million over Labor Day weekend.

The Simu Liu-led Marvel Cinematic Universe entry is expected to make $25 million on its first day of release after having earned $8.8 million during Thursday previews.

The superhero film is currently expected to draw in many more viewers before Monday and to also set a record for the highest Labor Day weekend opening to date, according to Deadline.

Making a splash: Shang-Chi And The Legend Of The Ten Rings is currently projected to take in over $60 million during its Labor Day weekend debut

The most profitable release during the weekend was the 2007 remake of the classic slasher flick Halloween, which pulled in $30.6 million.

Shang-Chi And The Legend Of The Ten Rings previously had its debut in Los Angeles last month, and it later screened at CinemaCon.

It went on to be released in various international markets over the past week, where it was made available for screening in locations such as Australia and Russia.

Unlike several other Marvel Cinematic Universe entries, Shang-Chi is currently theater-exclusive, where it will remain for 45 days after its release.

New strategy: The Marvel Cinematic Universe entry will remain theater-exclusive for 45 days before it is made available on the Disney+ streaming service

After the period of time is up, the film will be made available for viewing on the Disney+ streaming service, where many other titles from the franchise are hosted.

Disney CEO Bob Chapek made a statement about the choice to keep the film off of the service during an earnings call on Friday and noted via Collider that the media giant was measuring the response to the strategy.

‘We think it’s actually going to be an interesting experiment…because it only has a 45-day window for us,’ he said.

Shang-Chi and the Legend of the Ten Rings was originally set to be released on February 12th, which would have coincided with the first day of the Chinese New Year.

Trying something new: Disney’s CEO, Bob Chapek, referred to the decision not to dual-release the film in theaters and on Disney+ as  ‘an interesting experiment’

However, its debut was delayed as a result of the ongoing COVID-19 pandemic, and it was then given a release date of May 7th, which was pushed further to July 9th.

After Black Widow was rescheduled to be made available to the public on that date, the superhero feature was moved a third time to its current place.

The film was met with generally positive responses from both critics and general audiences, with Rotten Tomatoes reporting that 93 and 98 percent of both groups enjoyed the feature.

Many reviewers pointed out that the film showcased a solid balance between dramatic depth and eye-catching spectacles for which Marvel films have become well known.

Doing well: According to Rotten Tomatoes, over 90 percent of both critics and audiences enjoyed the Marvel Cinematic Universe entry

Marvel Studios president Kevin Feige recently spoke to Comic Book and told the media outlet that there were future plans for Shang-Chi and the Legend of the Ten Rings’ titular character in place.

‘The early reactions to the characters and to [Shang-Chi And The Legend Of The Ten Rings] itself gives me great hope that that people will want to see more of these characters,’ he said.

He added, ‘We certainly have many ideas of where to take them and where to put them…we think they’re spectacular, and we think they have great potential in the future.’

The feature’s director, Daniel Deston Cretton, also spoke to the media outlet and noted that he was interested in producing another flick centered around the superhero.

Not the end: Marvel Studios president Kevin Feige previously expressed that the film’s characters ‘have great potential in the future’

‘There was one setting that we were not able to do in this movie, but I won’t say what it is because I really hope that we get to do it again in another film,’ he remarked.

Also in the box office running for Labor Day weekend are films such as Candyman, which has raked in nearly $34 million, according to Box Office Mojo.

Following the horror feature are Free Guy and PAW Patrol: The Movie, which have grossed over $182 million and $65 million, respectively. 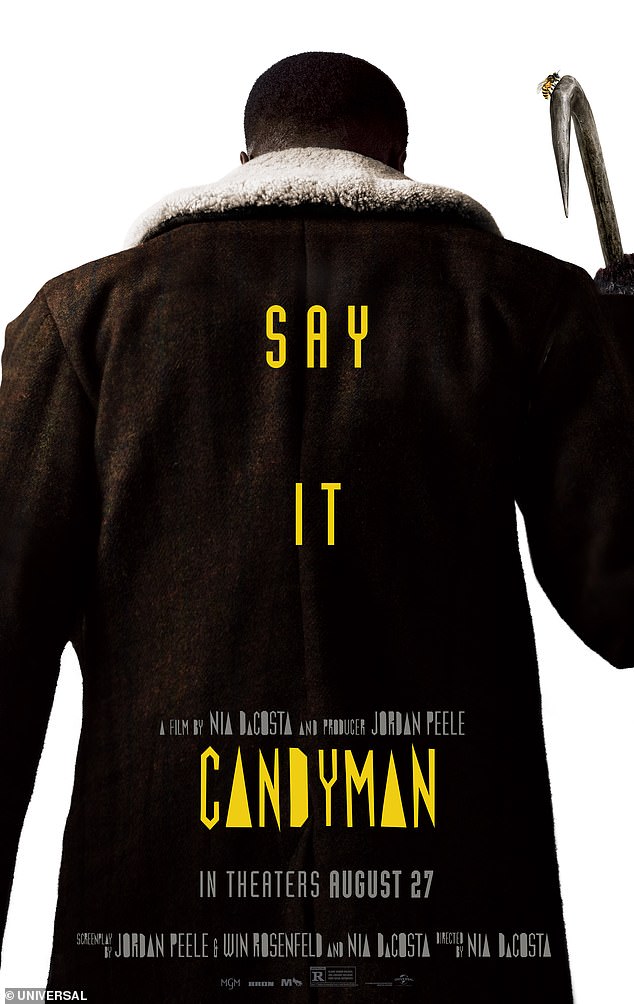 In the running: Other box-office giants at the moment include features such as Candyman, Free Guy and PAW Patrol: The Movie