Shaquille O’Neal rushed to help a family-of-five Thursday after they were involved in a head-on collision while he carried out deputy duty in Florida.

The retired basketball player joined the Broward County Sheriff’s Office on Thanksgiving Day on a mission to hand out turkeys to the needy.

But he but didn’t expect to witness a car crash involving a woman and four young children during the holiday. 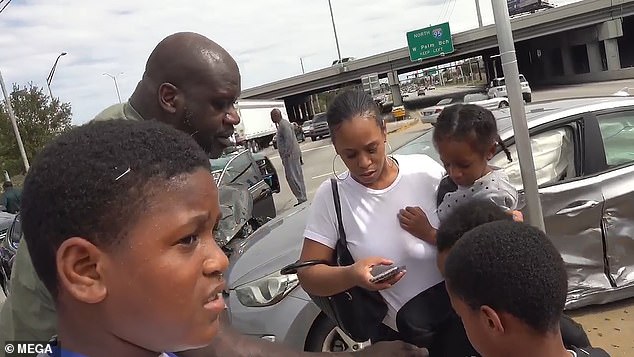 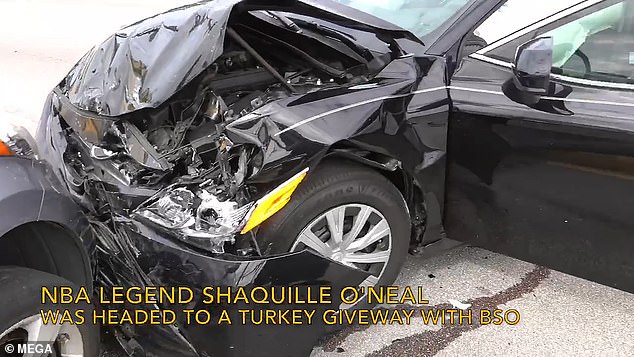 Shaq, who was riding in a squad car at the time, was just about to reach the turkey handout when he witnessed the crash in Broward County, Florida

O’Neal, 46, was seen comforting the shaken-up group as a team filmed his day with law enforcement as an auxiliary deputy with Sheriff Israel.

A Facebook page for the team that shared the clip explained how the former sports star, now known for his on-screen appearances among the very young, immediately tried his best to distract them from the scary incident.

‘They came upon a car accident in their travels around the county and Deputy Shaq sprang into action to cheer up the kids,’ BCO wrote on the social media website.

A one point the 7ft 1in star, aged 46, was recorded holding the hand of one of the boys and asking if he was alright while the parent made calls to pertaining to the two-car collision. 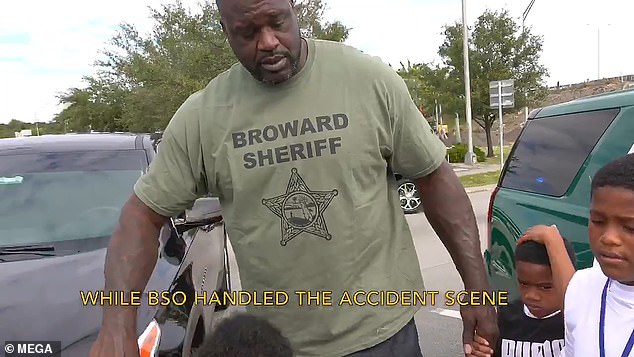 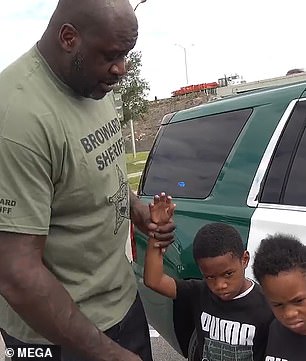 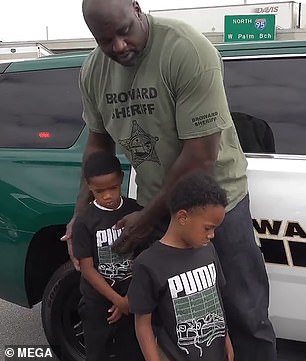 The youngsters looked shocked after the dangerous incident then had the added surprise of the famous face attending the scene during his high-profile appearance.

One of the children being held by a member of O’Neal’s entourage was then passed over to the parent and was videoed crying as mayhem surrounded them.

The black vehicle was severely crushed at the and the gray motor had a huge dent in the side suggesting it had been T-boned. 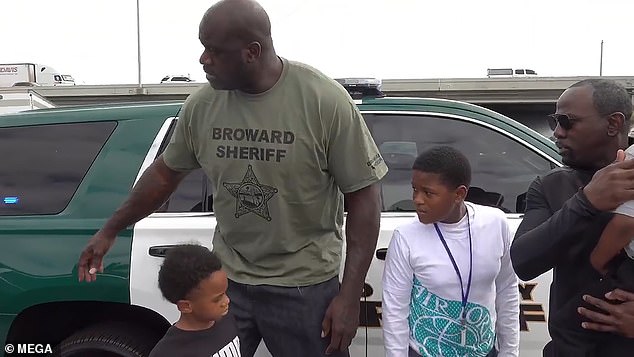 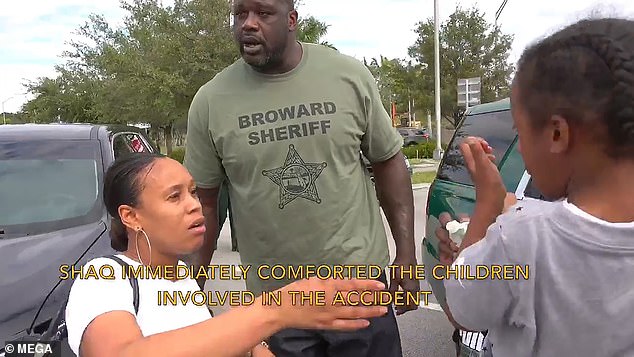 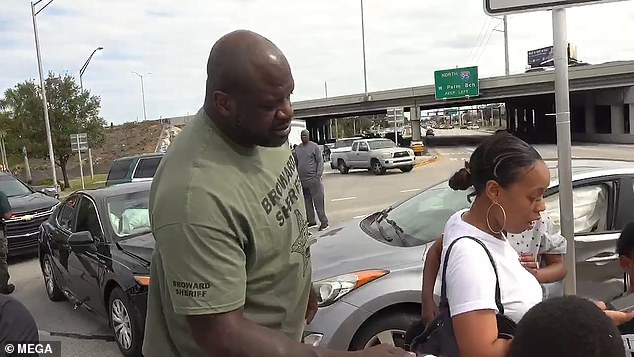 The woman was visibly emotional following the collision 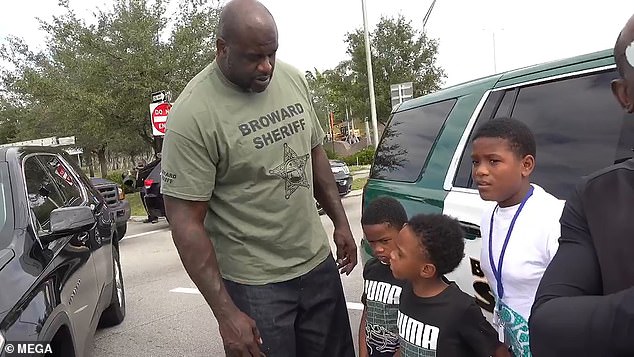 It’s not clear who was in each vehicle involved but footage shows the airbag was inflated on the driver’s side of the gray car.

While he’s an NBA Hall of Fame figure, he was on his way to the American Police Hall of Fame & Museum in Titusville to give out free birds one Turkey Day.

Many of the grateful receivers couldn’t believe their good fortune as they were handed food by O’Neal who they thanked and affectionately referred to as ‘Shaq’. 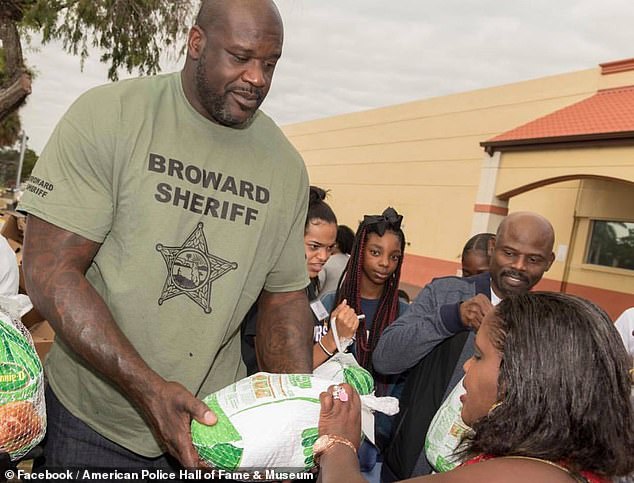 Following the crash, Shaq then continued with his original objective – handing out turkeys to people in need 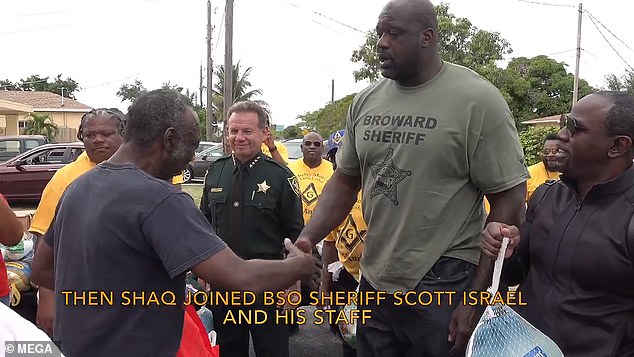 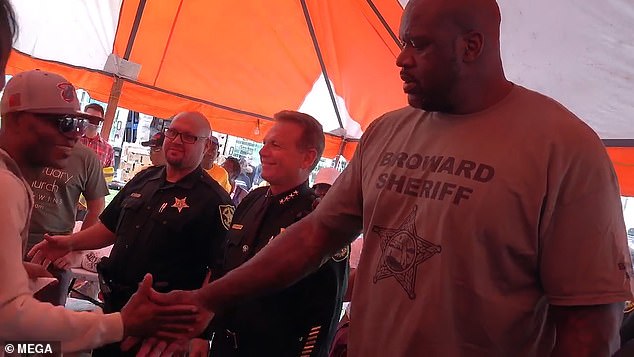