Shard of glass tears into woman’s FACE after a thug, 27, glassed another female reveller in a pub

Horrifying moment a huge shard of glass tears into woman’s FACE after a thug, 27, glassed another female reveller in a pub as he is jailed for seven years

A thug who glassed a woman in the head and sent glass flying into an innocent bystander’s face has been jailed for seven-and-a-half years.

Horrifying CCTV footage shows Stuart Cunliffe, 27, speaking with another reveller at the Rose and Crown in Chorley, Lancashire, before he erupts with rage.

Their conversation appears to turn sour and the woman pushes Cunliffe before he raises his glass into the air and his drink flies over her and towards the bar. 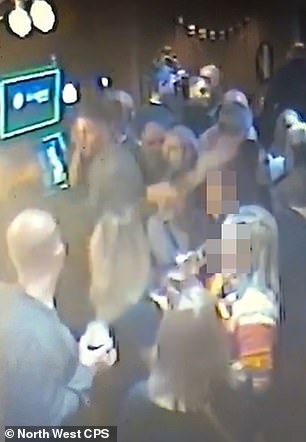 The woman in red minds her own business in the pub, left, while a man and woman stand behind her appearing to argue before the woman, right, walks away and the glass is thrown

She is then seen turning around towards where the innocent woman, wearing a red Christmas jumper, is standing before Cunliffe lifts up his pint glass again.

He throws the glass onto the brown-haired woman’s head and is smashes sending shards flying towards the blonde woman in the red jumper.

The blonde woman immediately drops her own drink and clutches at her face, as other revellers turn around and comfort the first woman.

It is not until a couple of seconds later that the others in the pub realise two women have been harmed in the incident.

CCTV footage from December 21 last year shows a piece of glass protruding from her face before she is ushered away by other pub-goers.

The victim can be seen cradling her face in her hands before other people realise the extent of her injuries. 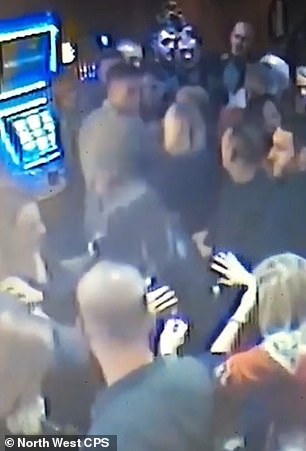 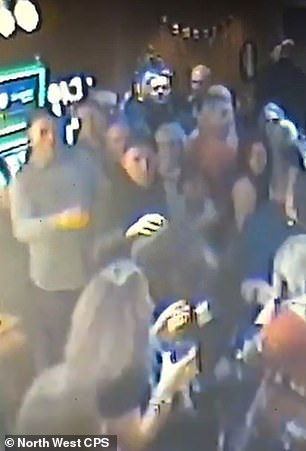 The woman in the red jumper puts her hand to her face, left, before others realise a few seconds later that she is injured, right, and rush towards her

Appearing at court on Tuesday February 19, Cunliffe was jailed for seven years and six months for two counts of wounding with intent.

Following sentencing, a witness said: ‘It was a really busy night in the pub and everyone was having a really good time.

‘Then, all of a sudden, I heard an almighty crash and turned around to see some bloke in a hat being hauled away by a group of men.

‘People were focusing on the girl who had been glassed and didn’t immediately realise the poor girl with blonde hair had glass in her face.’