In an extraordinary lawsuit filed Tuesday in Delaware’s Court of Chancery by CBS’s parent company, National Amusements, Redstone alleges that CBS board director, Charles Gifford, ‘acted in an intimidating and bullying manner’ toward her during the board meeting, ‘including on one occasion by grabbing her face and directing her to listen to him.’

The accusation follows one meeting in which Redstone suggested Gifford not be renamed as a board member, according to NBC News.

Redstone claims Gifford apologized to her by explaining ‘that was how he treats his daughters when he wants their attention.’

Redstone says she fired back at Gifford telling him ‘She was not Mr. Gifford’s daughter but instead the vice chair of CBS,’ according to the suit.

CBS released a statement denying Gifford became physical with Redstone, and said her allegation was a ‘baseless personal attack’ on the director as she tries to execute his duties.

‘Ms. Redstone’s issue with Mr. Gifford is that he has always operated by an entirely different definition of what it means to be an independent director – namely to act in the best interest of all CBS shareholders, a CBS spokesperson said in a statement, according to the New York Post.

‘As a result of Mr. Gifford’s steadfast belief in good corporate governance, it is unfortunate and revealing that National Amusements Inc. has resorted to baseless personal attacks that are clearly tied to the execution of Mr. Gifford’s duties in this matter.’

Redstone’s filing also lays attack on CBS’s CEO Les Moonves, who she accuses of using hardball tactics to strip her of her voting control over the company, through her holding company, National Amusements.

Redstone, the daughter of ailing media mogul Sumner Redstone, has an 80 per cent voting control, which CBS’s board tried to dilute last week by issuing a dividend.

Sumner Redstone, 95, remains chief executive of NAI, which he founded, but has stepped back from day-to-day duties at CBS and Viacom.

Shari Redstone asked the Delaware court to rule on the 11-3 vote to dilute the Redstone family’s voting share.

NAI argues that CBS’s big to shrink Redstone’s influence over the company is ‘invalid’ and in violation of its bylaws.,

Redstone amended the rules the day before the vote to require a ‘supermajority’ of at least 90 per cent. 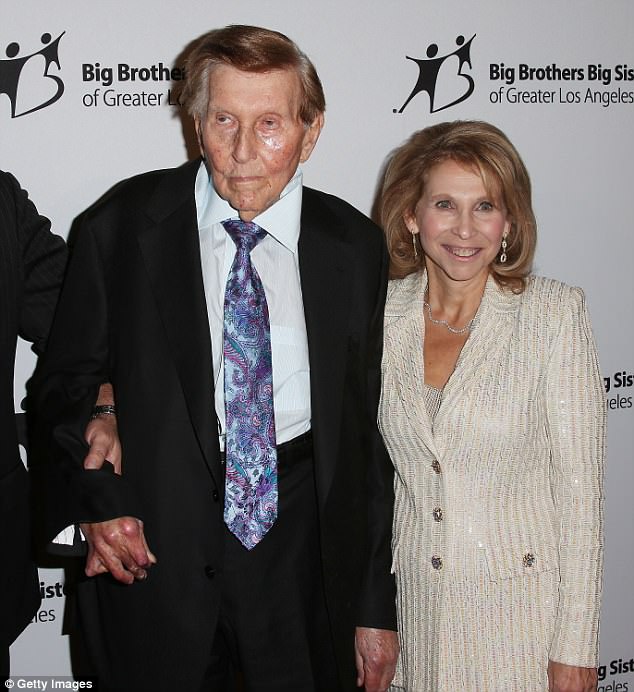 Sumner Redstone, 95, has remained chief executive of NAI, which he founded, but has stepped back from day-to-day duties at CBS and Viacom

It is not up to the Delware court to decide on the meaning of the board’s vote.

The suit also alleges that Moonves ‘has tired of having to deal with a stockholder with voting control and has taken particular umbrage that the exercise of such stockholder’s control has migrated from Sumner Redstone to his daughter, Ms. Redstone.’

Redstone says she and Moonves discussed and agreed that combining CBS and Viacom would ‘benefit’ both companies’ shareholders, ‘providing greater scale as needed for success in today’s media and entertainment landscape, and better positioning the companies for a larger transaction in which the combined entity could fetch an attractive premium that neither CBS nor Viacom alone could command.’

That’s in contrast to claims by CBS, which alleged in a suit last week that Redstone had tried to force CBS into a Viacom merger, threatening to replace CBS board members if they didn’t vote for it.