A hidden detail in the background of a ordinary family photo at the beach has divided a Melbourne community.

The photo appears to show a shark fin spotted metres from swimmers in shallow waters at Carrum Beach in Melbourne’s southeast this week.

The image (pictured) was posted to the SES Chelsea Beach unit in the area and showed a man pointing at the camera with the child, with the small fin-like image sticking out from the water behind them

On Sunday, the Chelsea SES said in a Facebook post that there had been an unconfirmed shark sighting at Chelsea Beach, fuelling speculation a local shark known as ‘Bruce’ had returned.

Then on Monday, following the sighting, SES Chelsea Unit received a message from a family who had been at Carrum Beach on Sunday who, after browsing through photos they had taken that day, noticed the shark fin shape in the background.

‘Now I have to admit, when I saw the pictures, I wasn’t sure what they were, so I have contacted a number of places to ask their opinions, and they all agree that although they can’t confirm it’s a shark, they can’t say that it’s not,’ the Chelsea SES wrote on its Facebook page on Monday.

‘The family are very genuine and, in fairness, they’re the first to admit that they’re not sure what they’ve snapped, but they certainly would like to know.’

Nearly 100 locals commented on the photograph. 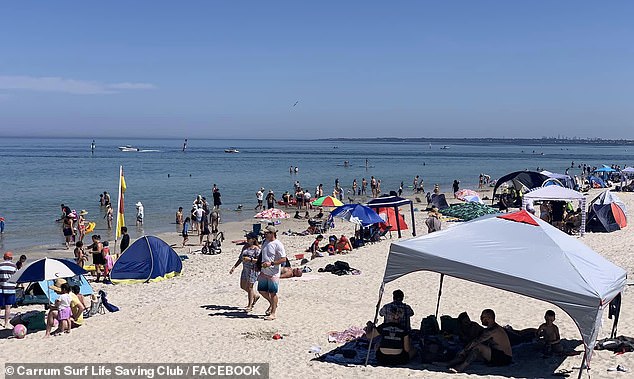 The fin was seen in a holiday snap taken at Carrum Beach in Melbourne’s south east as the family took their toddler to the beach for the first time this week (pictured, beachgoers at Carrum Beach)

‘Looks like a small shark so maybe that’s why no one was attacked,’ said another.

‘I agree that it can’t be discounted – but it’s highly unlikely that a shark cruising in the shallows would not be seen and those in the photo not aware,’ an expert fisherman said.

‘I’ve seen a lot of sharks (saw a few yesterday fishing – but gummy sharks) as well as dolphins, whales, seals and stingrays, as an avid diver and fisho that is at the beach near on every day.

‘If that was a shark, everyone in that photo would be looking at it.’

‘You’d think someone would see that,’ one commenter agreed, while one more said the canine was acting too calm for a shark to be so near.

‘Surely the doggo in the water would have been on to it?’ 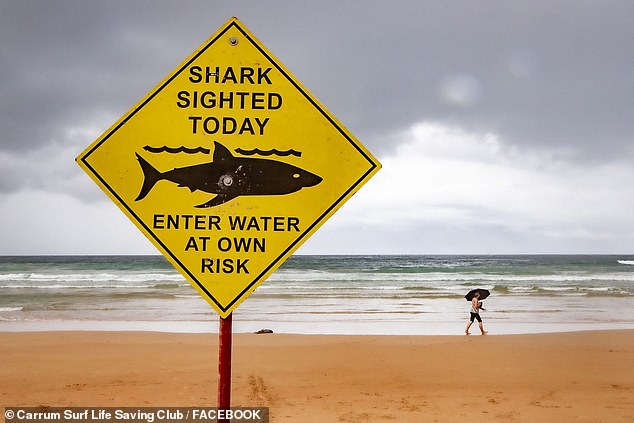 It comes after an unconfirmed sighting of a well-known shark called Bruce was made just off the beach on the same day at Chelsea and Bonbeach, three kilometres away

‘I’m tipping that’s the back of a dog’s head,’ one more wrote about the shark fin image, while another claimed it was a stingray.

‘There is a dog in the water near, whatever it is, so IF the dog didn’t get taken then that is not a shark . Dogs are the first thing to get taken . I’m thinking maybe [it’s] more likely a [sting]rays flap,’ he said.