‘I politely told him he wasn’t allowed between the flags’: Shark swimming in the shallows at a popular beach on Boxing Day terrifies swimmers

A shark has been spotted swimming extremely close to the shore at a popular beach packed with holidaymakers.

The shovelnose shark was captured on camera by Troy Eady at Main Beach, Byron Bay, on the New South Wales north coast.

The large marine predator was swimming in the shallows surrounded by terrified onlookers.

‘He came up the inshore gutter into the flagged area so as he had a fin on,’ Mr Eady said.

WHAT IS A SHOVELNOSE SHARK?

‘I politely told him he wasn’t allowed between the flags and walked with him across the bank between the backpackers and out of the flags.’

‘He was a reasonable size shovel nose not that scary. In fact I suspect it got more of a fright to look around and see a thousand red raw sunburnt pommy backpackers,’ he said.

The video was uploaded to social media garnered over 23,000 views overnight.

‘I don’t think I’ll ever get over the trauma of that day,’ one user wrote.

‘Get out the spear gun,’ said another user. 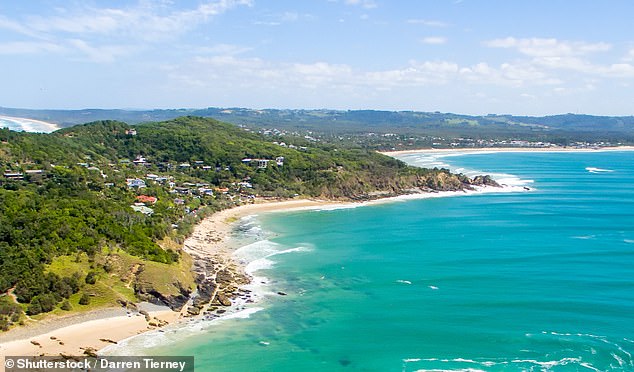 The shark was swimming in popular Main Beach in Byron Bay, on the New South Wales north coast (pictured)