Sharon Osbourne claimed women ‘are not happy’ when they are overweight, as she commented on Adele’s recent weight loss.

The TV personality, 67, reflected on her own weight loss journey which saw her lose seven stone as she gave her thoughts on the singer, 32, slimming down on Tuesday.

Sharon said on The Talk: ‘When these women say that they are really happy in their body I don’t believe them.

Opinion: Sharon Osbourne claimed women ‘are not happy’ when they’re overweight on Tuesday’s The Talk and praised Adele for her seven stone weight loss as it was ‘her journey’

‘My body was really, really big. But I wasn’t happy. Sure on the surface, but at night in bed alone I was very unhappy.’

Talking about the Chasing Pavements hitmaker she said: ‘I totally understand with Adele. It was her time to lose weight that’s all in her journey and her life.

‘She must have felt you know what I am going to try and lose weight for wherever reason – health I am sure.

‘You know what she looks absolutely fantastic. I am happy for her and everybody should be happy for her, because it was her choice. 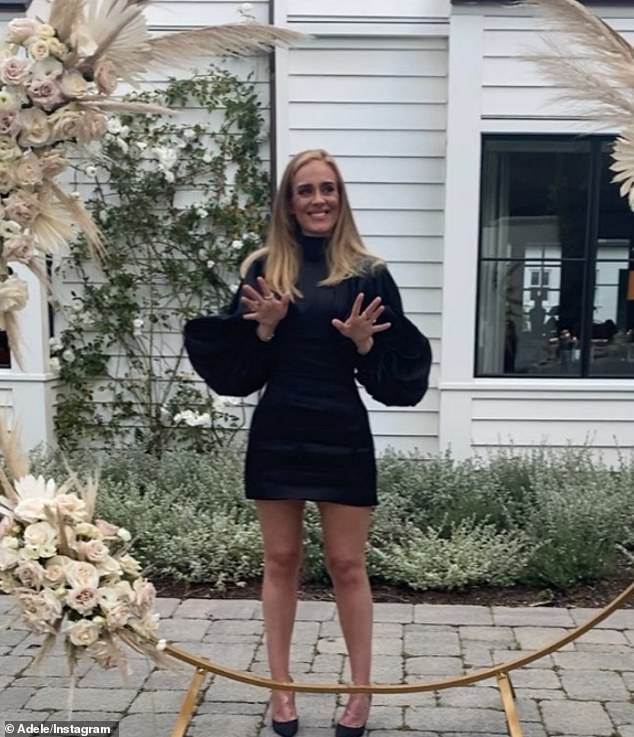 Thoughts: Talking about Adele she said ‘It was her time to lose weight that’s all in her journey and her life’, as she said she ‘doesn’t believe’ overweight women when they say they’re happy 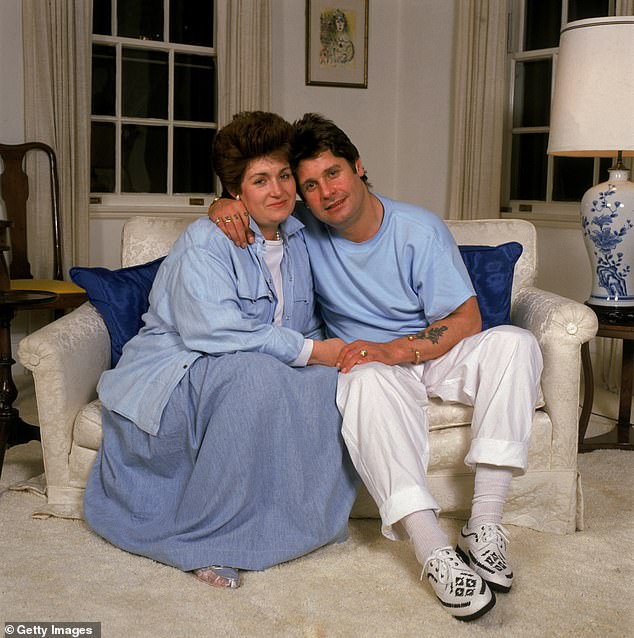 Struggle: Going on to discuss her own thoughts when she was overweight, Sharon added: ‘My body was really, really big. But I wasn’t happy’ (pictured with husband Ozzy in 1987)

‘She didn’t do it for anybody else but herself. And so everybody should be happy for her,’ Sharon added.

Going on to discuss her own struggle when she was overweight, Sharon went on: ‘When I was 100 pounds overweight I used to feel comfortable when I was with bigger women.

‘I felt like we had something in common. We never spoke about it , but there was this underlying connection we had and I always felt like that. 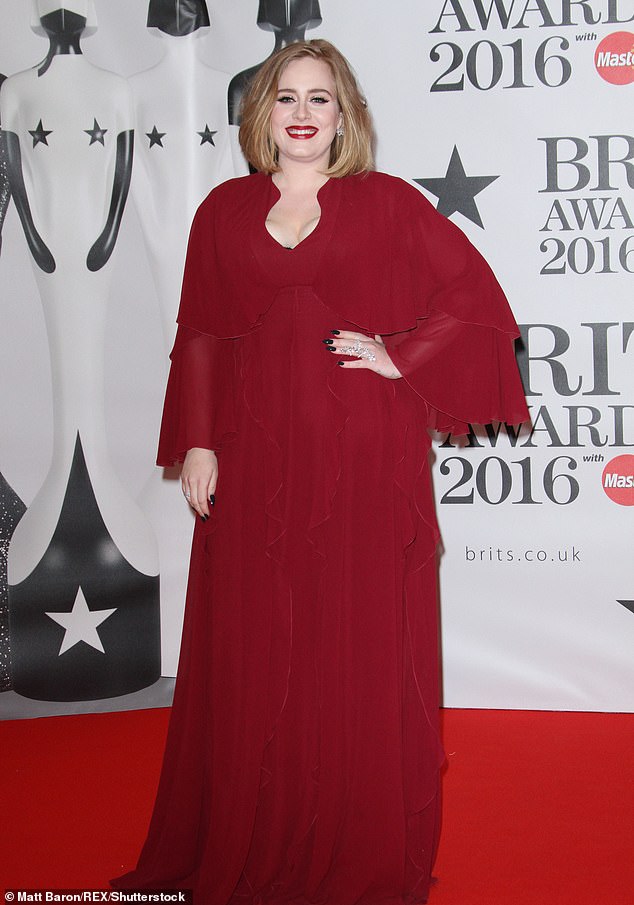 Different: Adele has always looked beautiful but her recent weight loss means she looks drastically different to when she appeared at London’s Brit Awards in February 2016

‘Mine was kind of shield and I loved it because every guy was my friend and I was never a threat to any woman.

‘And I used to have the best time with guys as it was “bring Sharon Aling she is good for a laugh”. I kept it as a shield.’

Since unveiling her new look on her 32nd birthday, displaying her incredible lithe frame, Adele has been showered with attention by fans and fellow celebs.

Adele rarely posts candid snaps to social media, and shocked fans when she uploaded the most recent image – which saw her wearing a tight black mini-dress. 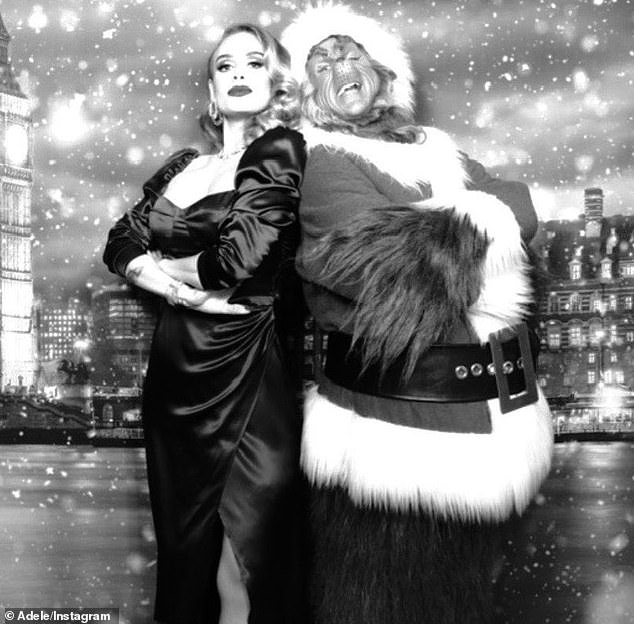 Sensation: Her birthday picture marked Adele’s first Instagram upload since she stunned the world with her svelte frame in photos from her Christmas party last year

‘Thank you for the birthday love. I hope you’re all staying safe and sane during this crazy time,’ captioned the superstar.

‘I’d like to thank all of our first responders and essential workers who are keeping us safe while risking their lives! You are truly our angels ♥️ 2020 okay bye thanks x’.

Her birthday picture marked Adele’s first Instagram upload since she stunned the world with her new svelte frame in photos from her Christmas party last year.

Adele, who has been sticking to a 1000-a-day calorie diet and also doing Pilates, had slipped into a shimmering gown and posed up a storm beside men dressed as the Grinch and Santa Claus.

Remember when: Adele became a body positivity icon for her larger figure when she first rose to global stardom; she is pictured in 2013

The pop superstar’s big reveal came after she split from her husband Simon Konecki last April and filed for divorce in September.

Adele and Simon share a seven-year-old son called Angelo and a People insider revealed her weight loss came partly from a desire to be healthier for her child.

‘She got to the point where she didn’t feel great. She knew she had to change something, because she wants to be the healthiest mom possible,’ said the source.

The insider added: ‘Her whole focus during the weight loss journey has really been all about how she can be healthier and how can she treat her body better. It was never about losing weight.’ 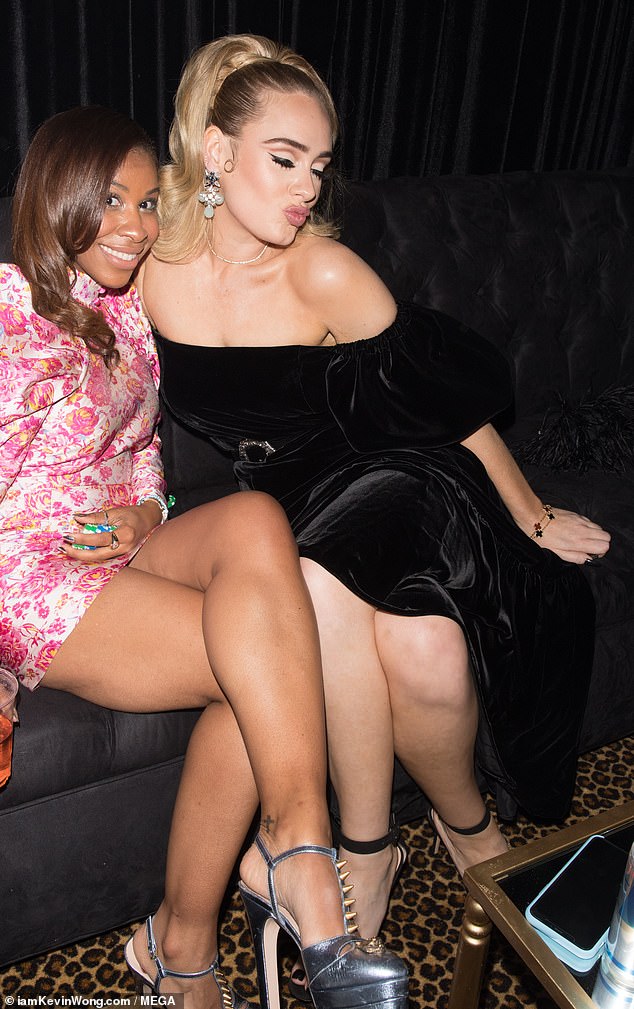 ‘I used to cry but now I sweat’: In October she had already visibly lost a great deal of weight as seen in pictures of her attending her friend Drake’s birthday party