It was once the preserve of someone who perhaps wanted some peace and quiet away from their house.

But many sheds are now turning into big businesses, with people across Britain becoming budding entrepreneurs who are making £5,000 a year from the hideaways at the bottom of their gardens.

Entries to this year’s Cuprinol Shed of the Year competition have revealed that ‘sheddies’ are growing plants, vegetables, keeping bees and even rearing animals – contributing nearly £30billion to the ‘shed-economy’.

One of the most colourful entries this year is Rachael Taylor’s shed housing her flourishing pattern and design business at the bottom of her garden in Merseyside, which was a ‘jungle’ when she bought the house in 2015.

Acclaimed musician Sam Fender has turned his shed in Tyneside into a music studio, while other entries include a shed providing an eco-system for local wildlife by George Smallwood in South Yorkshire.

Michael Jelley has created a shed filled with motorcycle memorabilia,Teresa Verney-Brookes has one featuring a Punch and Judy show, and Stephen Davies uses his to create 3D printed hands and arms for children.

Research by Cuprinol has found 55 per cent of Britons now use their shed for hobbies such as beekeeping, growing vegetables and even bottling wine as small-scale producers cash in on their backyard businesses.

The competition’s founder Andrew Wilcox said: ‘Since the Cuprinol Shed of the Year competition started twelve years ago we’ve seen some amazing and inventive uses of sheds from all over the UK.

‘We’ve always had a lot of hobbyists and workshops shed entries, but in the last few years there has been so many more start-ups and small businesses using their sheds to make a little extra money or start a new career.’

To enter the Cuprinol Shed of the Year competition for 2018, and to see more interesting entries, click here.

RAINBOW DAYDREAM by Rachel Taylor in Merseyside: This shed was created following an ambitious garden redesign after Ms Taylor bought the house in 2015 with what she described as a ‘huge, untamed and overgrown jungle’. After months of clearing, planning, and landscaping, she created the shed from which she now runs an independent creative business 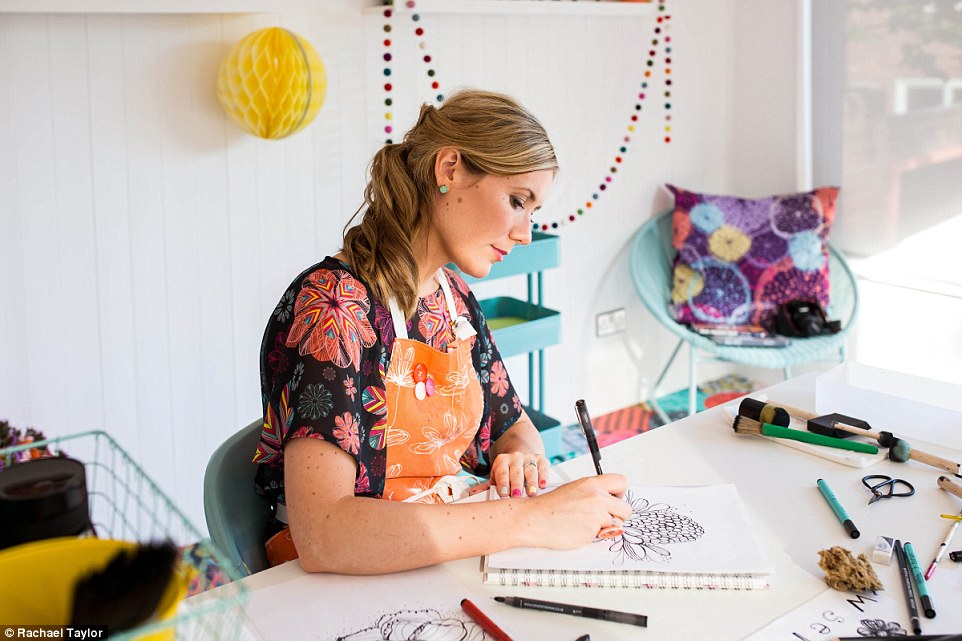 Ms Taylor says the shed ‘makes me feel like I’ve been transported on a sunny holiday whenever I am in there so work never feels like work’, adding that she has ‘injected my own personality and design style into the scheme of both the shed interior and exterior’. The cupboard handles, fabrics, cushions, lampshade and even the floor design are all ‘completely bespoke’ 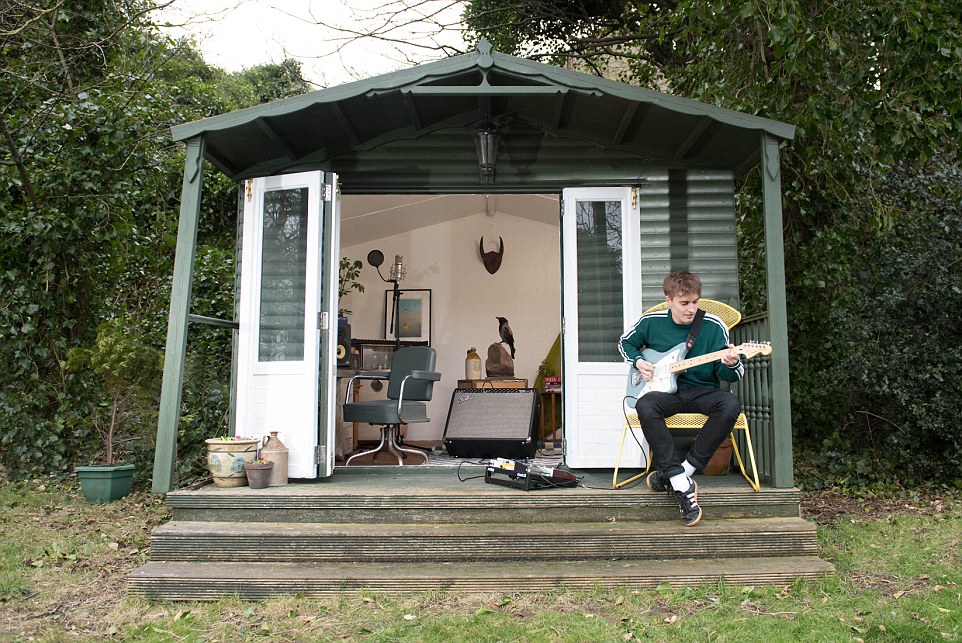 Sam Fender in Tyneside: The guitarist from North Shields records music in the unusual location of his garden shed and is known for his lyrics on government surveillance, fake news and sexual harassment. The 21-year-old has supported the likes of Ben Howard and Willy Mason on the road, and his music is mixed by Barny Barnicott who has worked with the Arctic Monkeys 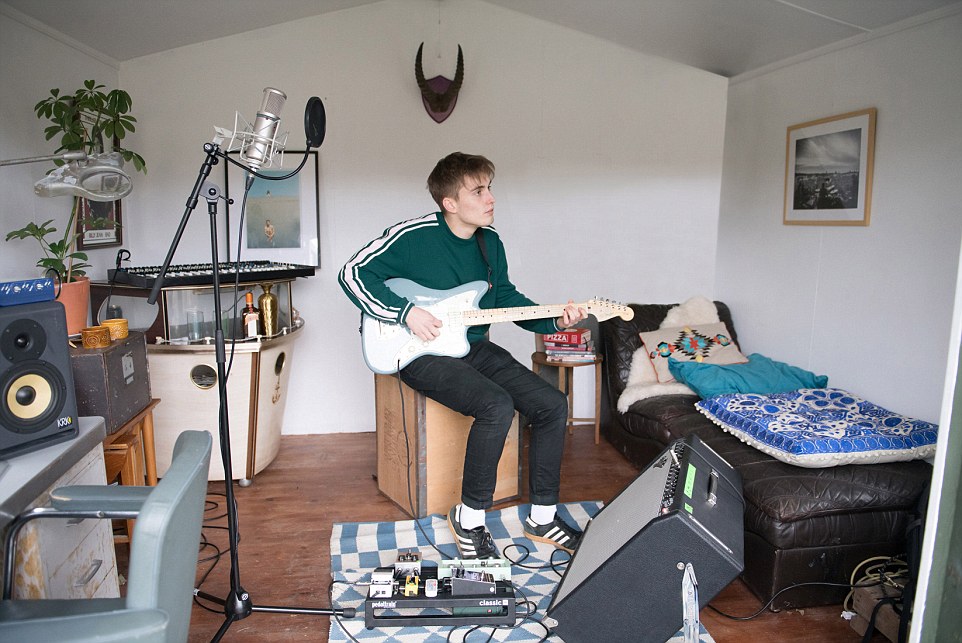 Mr Fender released his debut single Play God in March after recording it in his shed, before gigs at a local pub brought him to the attention of Ben Howard’s manager. Support slots followed with the likes of Catfish And The Bottlemen, Hozier and George Ezra – and he was listed by Radio X as one of the best ten new artists of 2018 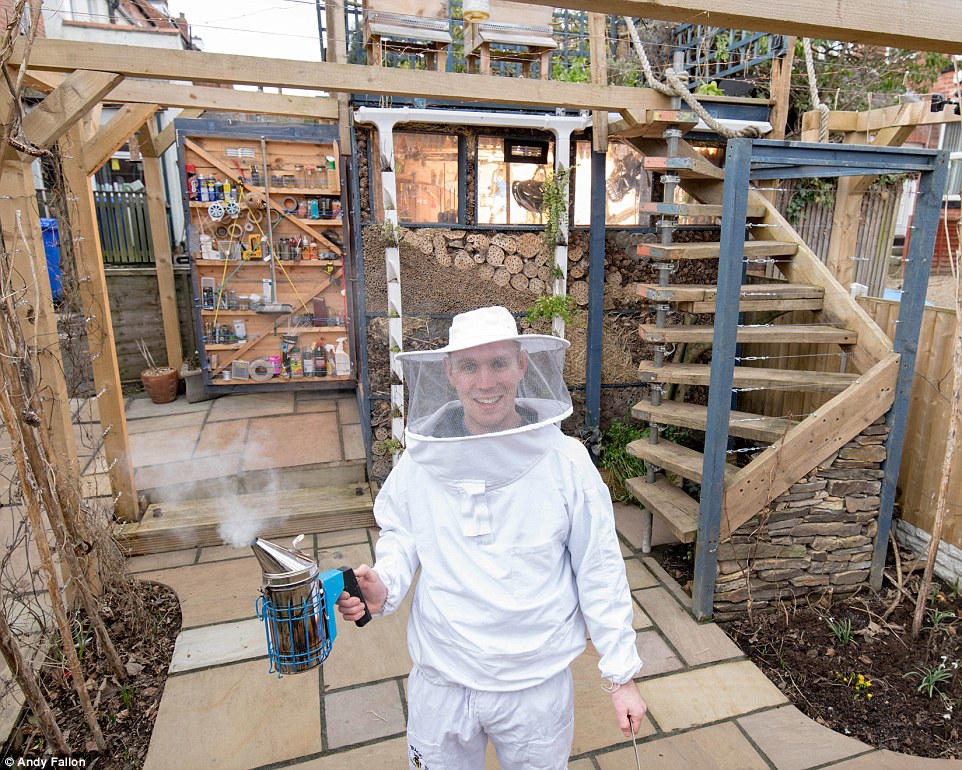 THE ECO SHED OF EFFICIENCY by George Smallwood in South Yorkshire: This impressive eco-friendly shed has a spiral staircase to the roof where there are beehives, along with a giant bug house on one wall. The roof has flowers and vegetable on it and when the water reaches the gutters it waters a down pipe herb garden, with any left finally watering the garden 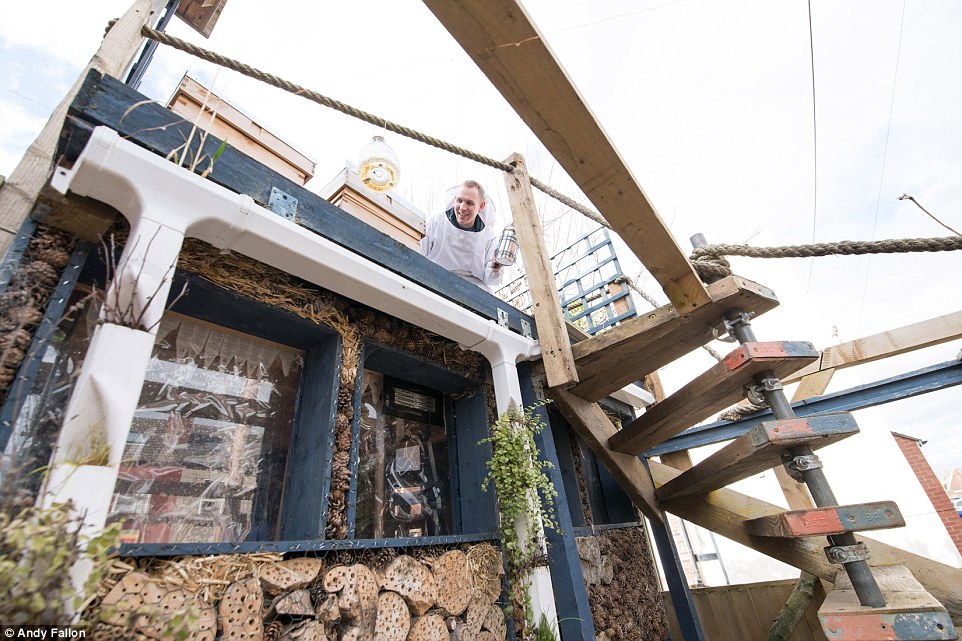 Mr Smallwood started off by building the base, and intended to buy a shed – but then decided to build the whole structure himself with a friend. He said: ‘Space is a premium so it is something I am constantly trying to make the most of. Ever open to new ideas on how this can be done.’ The spiral staircase to the roof is made from scaffold tube and wooden boards 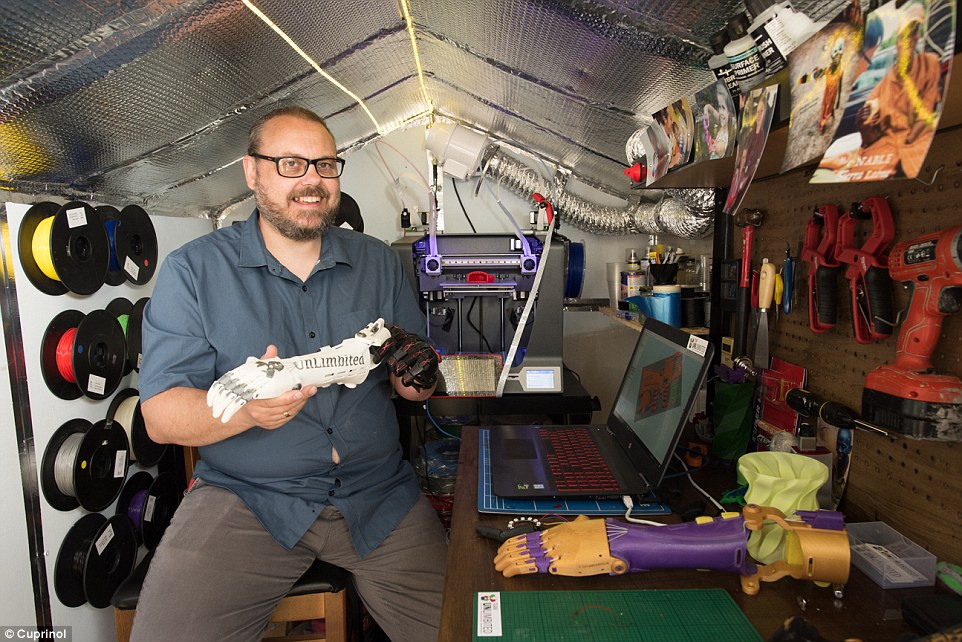 TEAM UNLIMBITED by Stephen Davies in Swansea: After being born with one hand himself, Mr Davies noticed the huge number of children that had no access, poor choice, or that were unable to afford an artificial arm – so created Team Unlimbited, which designs, print, build and deliver 3D printed hands and arms to children completely free around the world 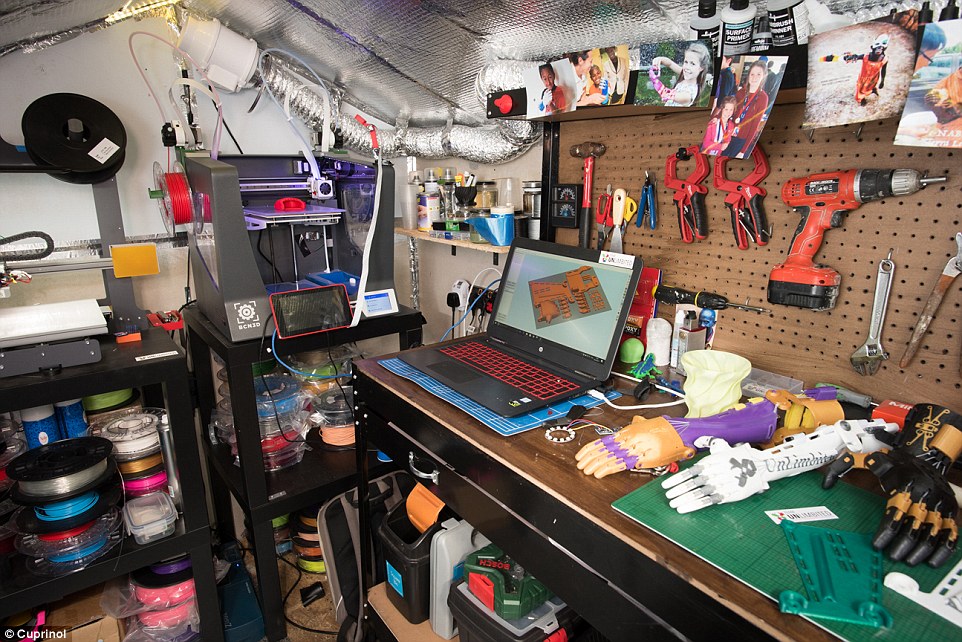 The mission HQ of Team Unlimbited is run from this shed in Swansea by Mr Davies in his spare time. From outside the shed in a back garden in Swansea looks unremarkable – but the whirring of hard-working machines can be heard. The small space is lined with photos of children the design has helped from around the world – from Peru to Pakistan, and Turkey to Brazil 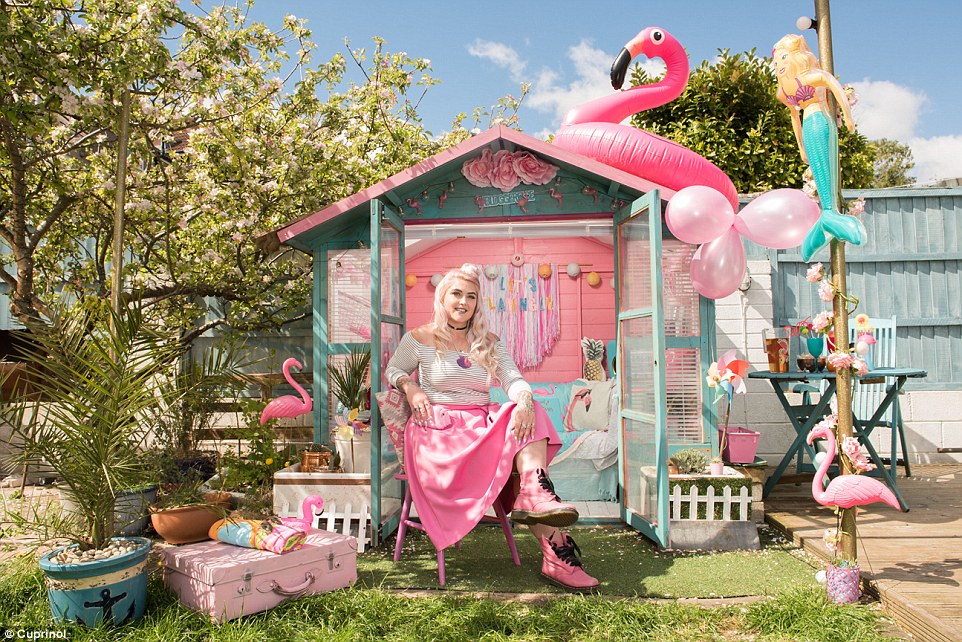 #GIRLSHED by Emily Fisher in Bristol: This pink, white and blue-themed shed is full of pretend flamingo  and belongs to  a YouTuber known as Mermaid Gossip, who has created the colourful multi-purpose summer workspace in her back garden 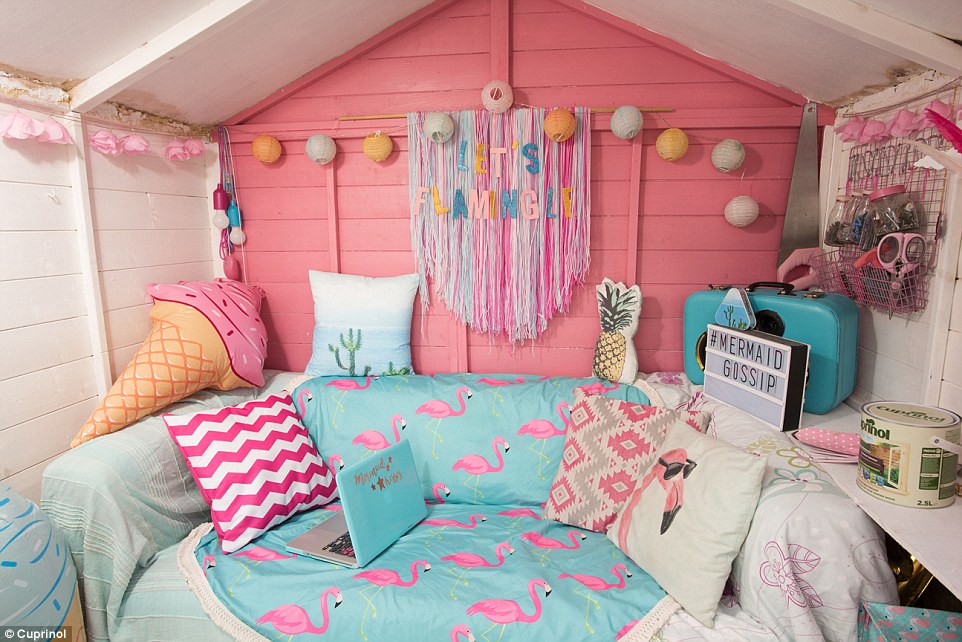 The YouTuber, whose real name is Emily Fisher, has an internet connection and a sofa in the shed. Ms Fisher can sit and work on her laptop while looking out across Bristol – and the shed also doubles as a place to store her DIY essentials 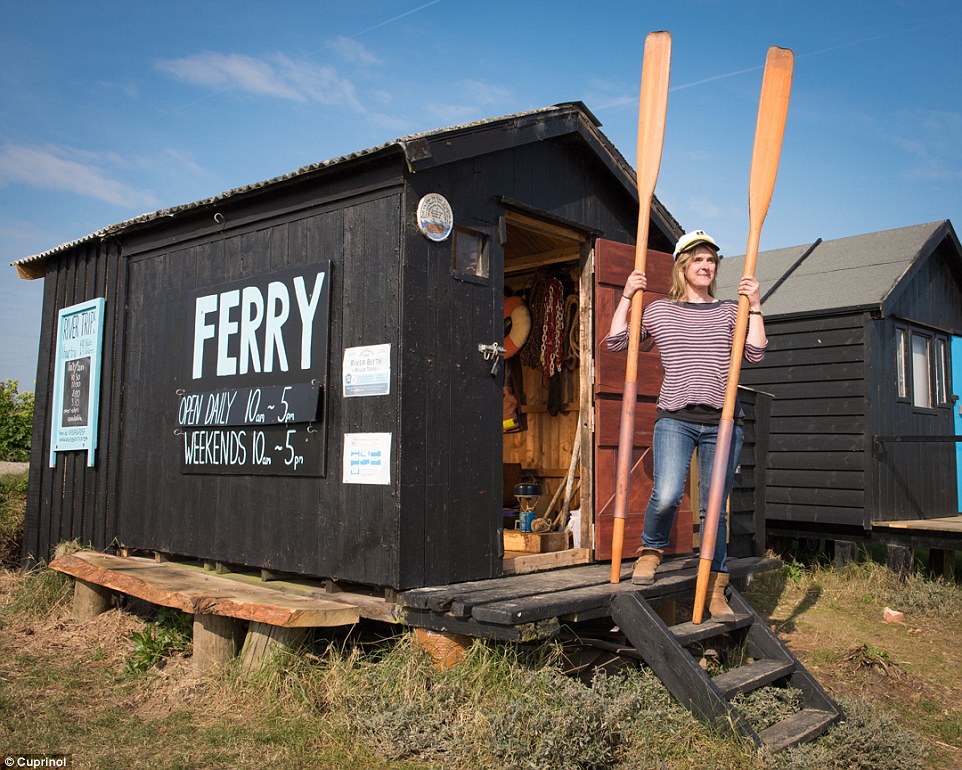 WALBERSWICK FERRY HUT by Dani Church in Suffolk: Established in 1236 as a rowing boat service across the River Blyth from Southwold to Walberswick in Suffolk, Ms Church is the fifth generation of her family to run and maintain the service 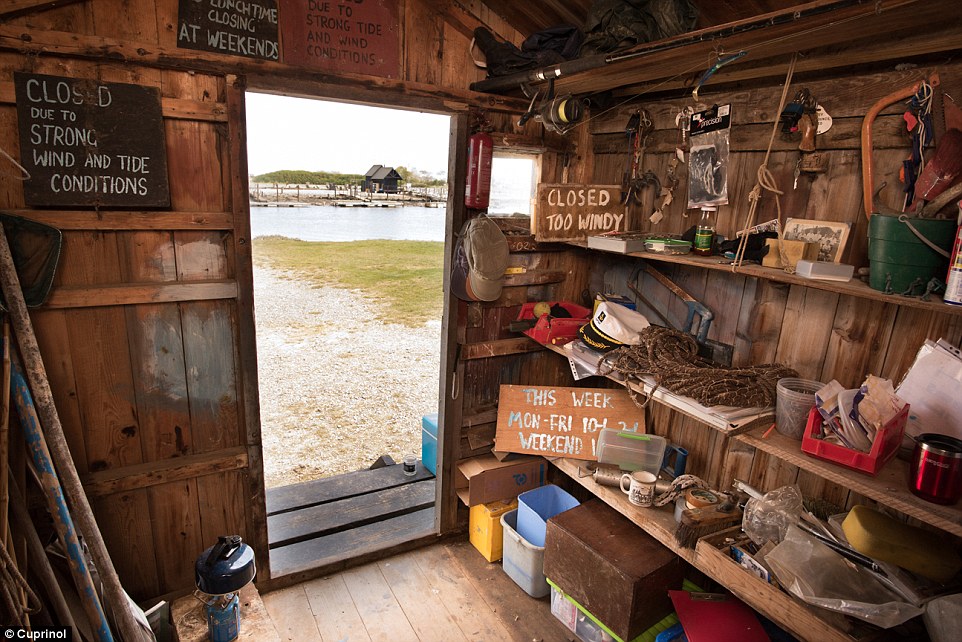 The shed is filled with all the essentials for the boat service, and also serves as a rest spot for her. It is set on stilts to reduce the flooding risk, and the wooden rowing boats are based on the Suffolk punt design – carrying up to 12 passengers at a time 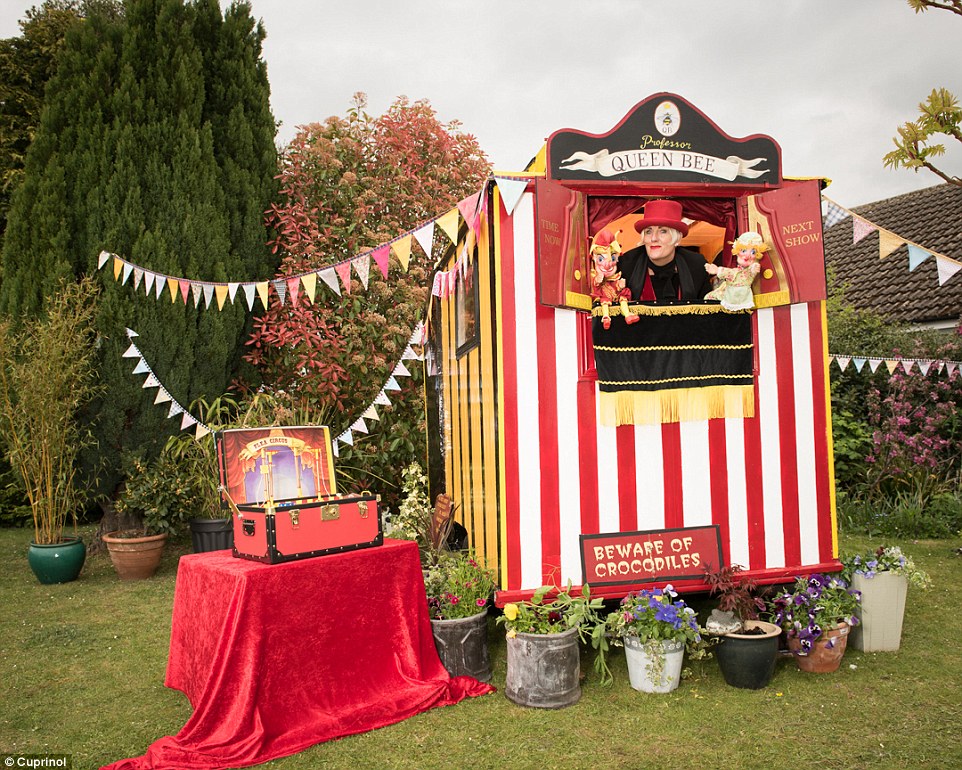 PUNCH AND JUDY SHED – Professor Queen Bee, aka Teresa Verney-Brookes in Reading: As the name suggests, this shed is dedicated to a version of the popular Punch and Judy show, but is said to be the only one of its kind in Britain 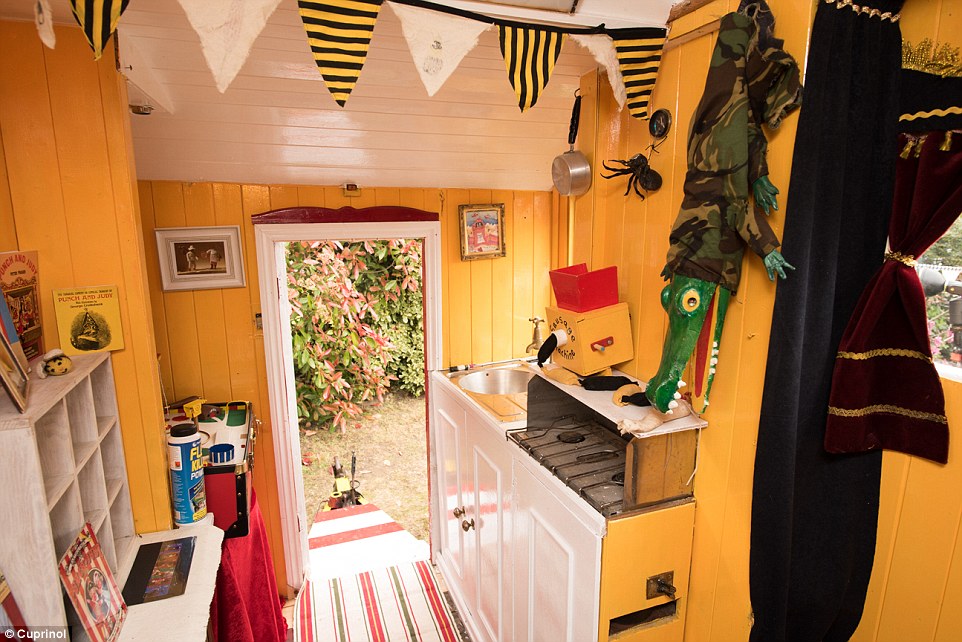 The shed is used in summer to tour and perform the show – as well as a flea circus act – while in winter it is used as storage for the characters. The shed is painted in bee colours on the sides, but keeps the traditional red and white stripes at either end 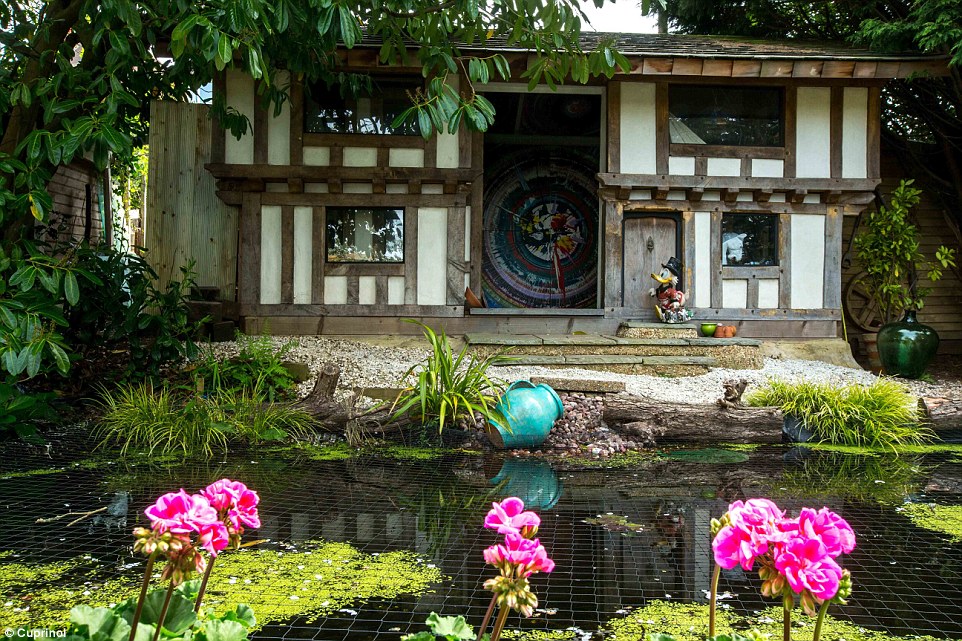 GARDEN COTTAGE by Tim Clark from Hastings: This cottage was built three years ago in East Sussex, and is based on the traditional medieval hall houses which were famous throughout the area and in Kent 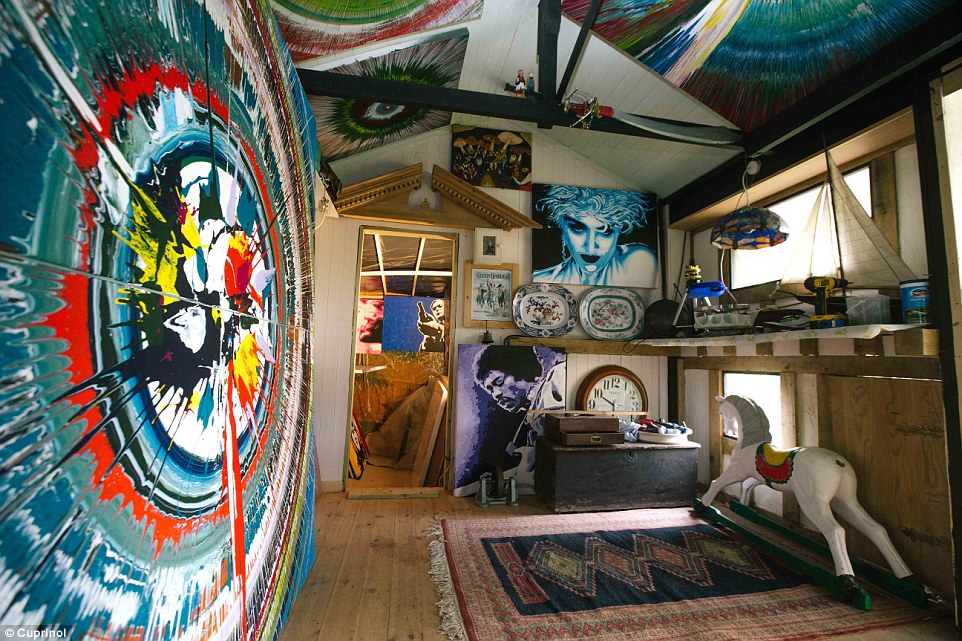 The oak frame of the cottage is carved out of solid oak beams and the front is made to look like a cottage with the inside as a normal functional shed. The shed is insulated and is used as a studio for painting and storing pottery 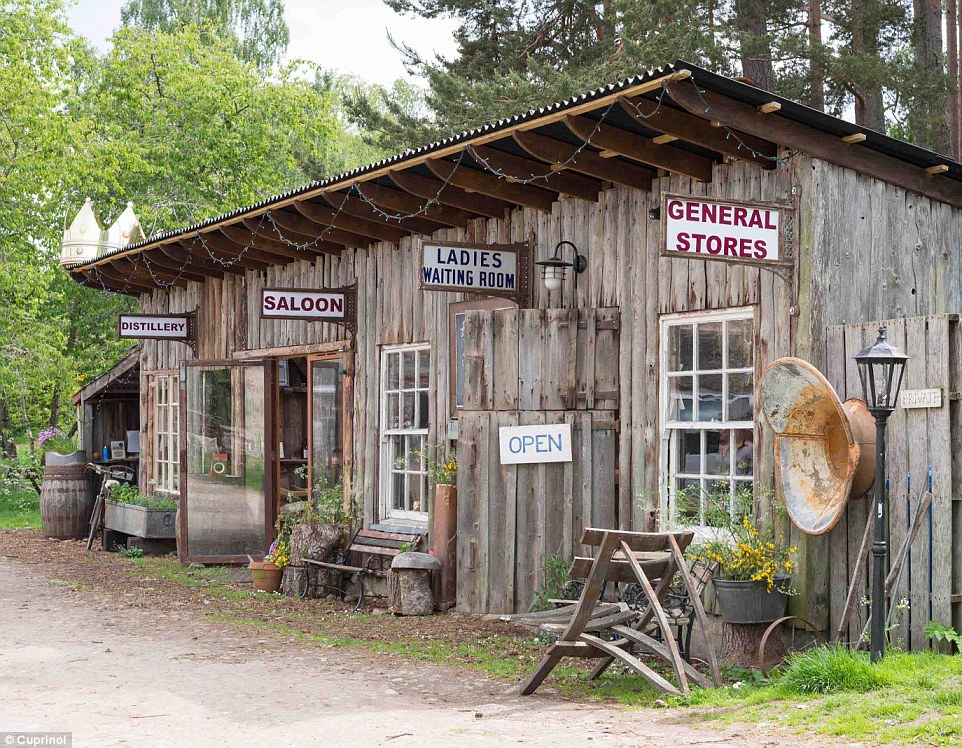 INSHRIACH DISTILLERY: Walter Micklethwait from Aviemore: Once a dilapidated hen house, the Inshriach Distillery has now become a farm shop which sells carved items, eggs and produce and has a Wild West-themed saloon bar 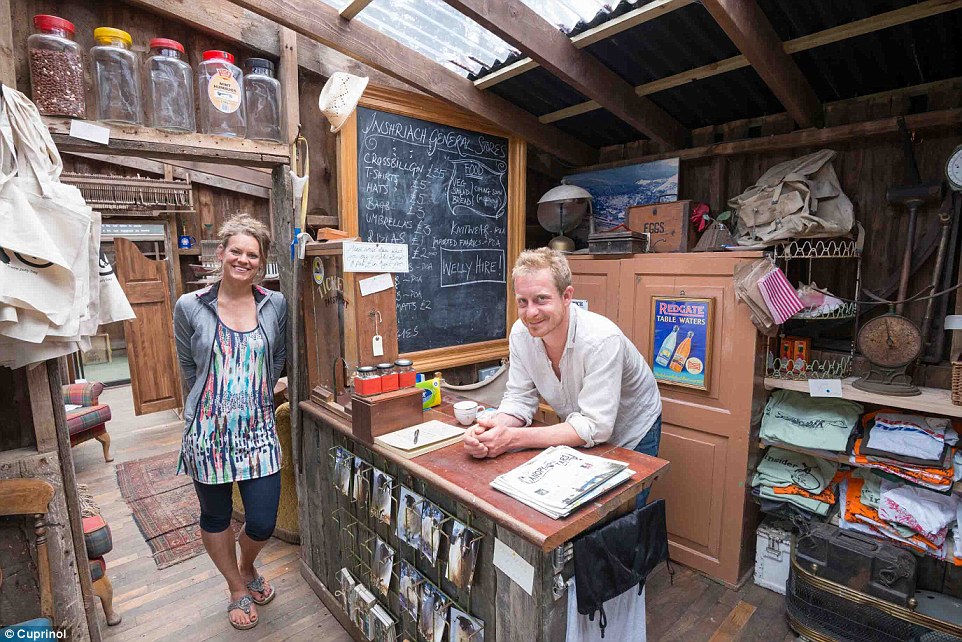 The shed features a gin joint and a velour upholstered piano bar. Made out of mostly recycled items including parts of an old dismantled railway station, the Inshriach Distillery in the Highlands has a unique charm and is home to regular parties 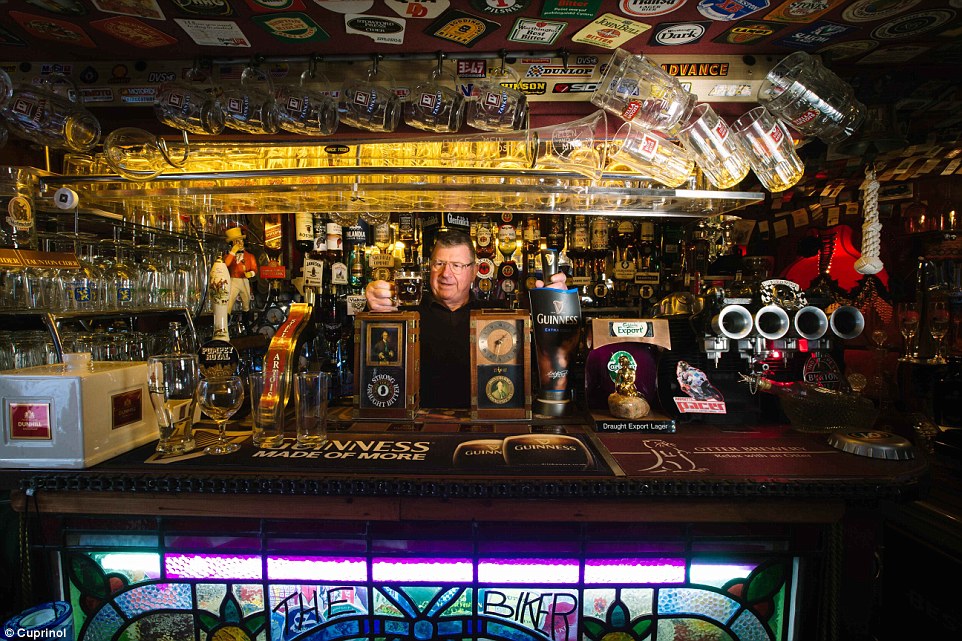 THE BIKERS by Michael Jelley from Chichester: This shed hand built over several years in West Sussex was completed in 2015 and consists of six rooms filled with pub and motorcycle memorabilia 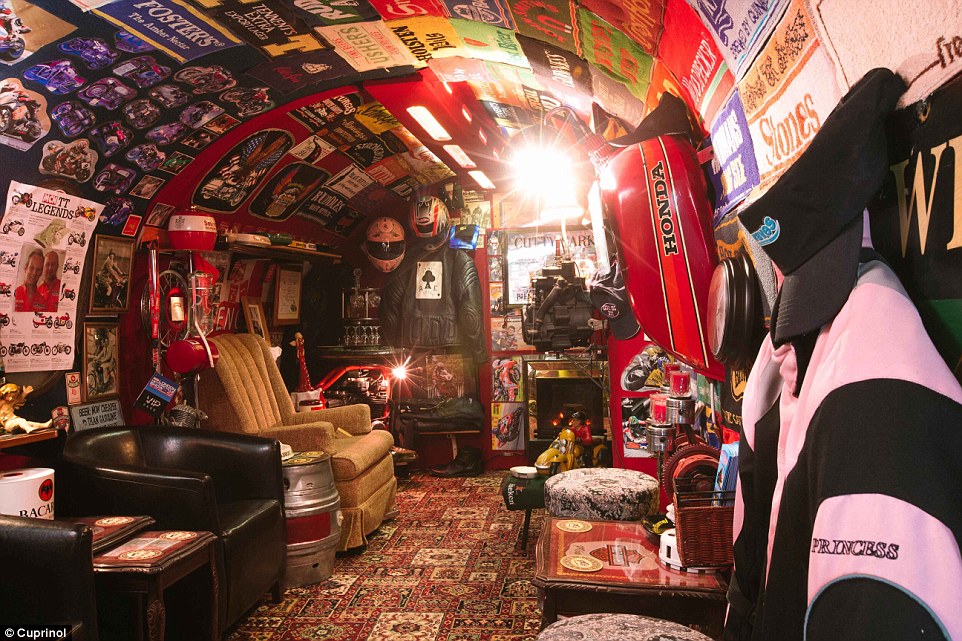 The Bikers shed has a large workshop for building and repairing bikes, a room for home brewery, a bar and a smoking room