Tap ‘Cameron Dawson’ and ‘penalty save’ into the search engine of choice and it is clear the Sheffield Wednesday goalkeeper has form.

Four years ago playing on loan for Alfreton in a 1-0 win at Altrincham, for instance. Then there was one in last week’s 4-0 thrashing by Norwich.

Doing it in a derby, though, that deserves a special pat in the back, whatever the final outcome. In this case a point at the expense of the neighbours and in their backyard too. 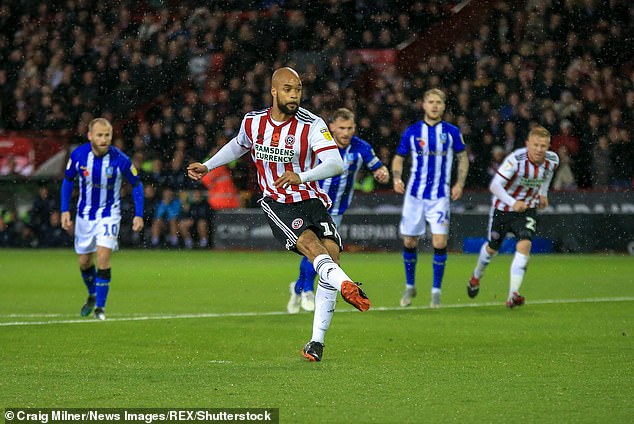 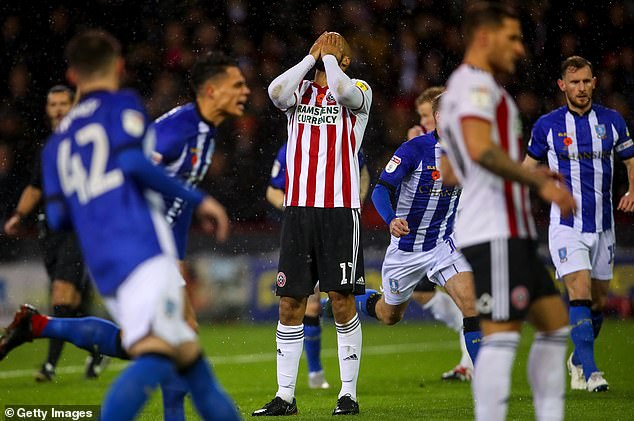 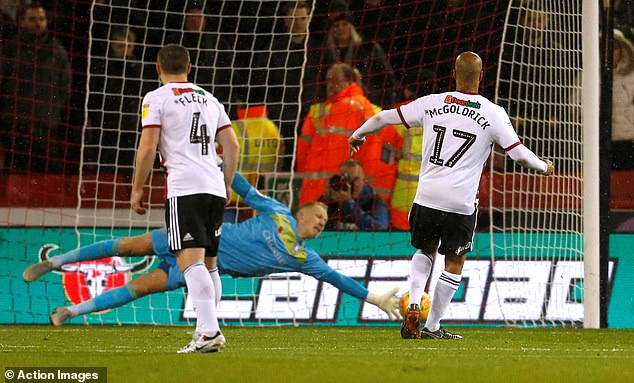 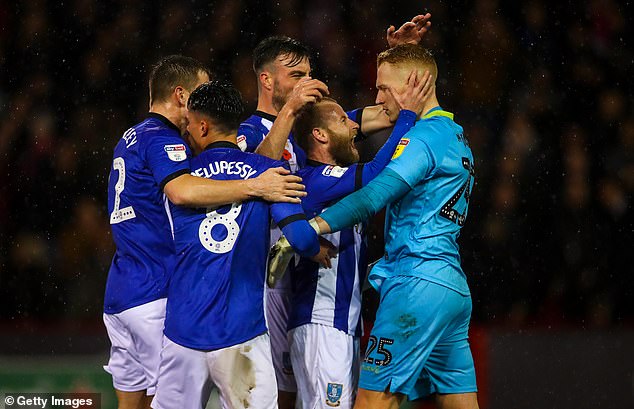 Dawson earned himself instant elevation to cult status in the blue half of the city with a brilliant penalty save to deny David McGoldrick then backed it up with a strong display to halt a four-match losing streak.

Andrew Madley did not hesitate to point to the spot as Mark Duffy crumpled under a challenge from Morgan Fox but the golden opportunity was wasted.

Dawson, a target for a section of Wednesday fans in recent weeks, is apparently a distant relative of Chris Wilder although the United manager was vague about the detail. 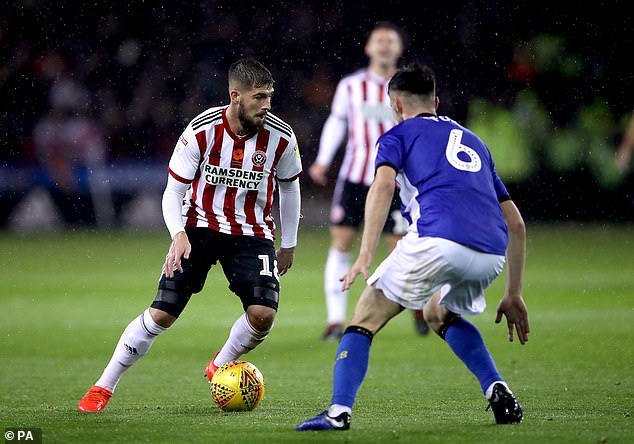 ‘I’m not down. I asked for a performance. If we had scored early they might have shown ambition and came out to play.

‘We had a purpose, a style, a way of playing. Their goalkeeper made two or three saves and was their man of the match by a country mile.’ Wilder was equally gung-ho before the match, glove firmly slapped across the face in a pre-match invitation to a Sheffield duel.

Sharpen those Blades. Except that the other half of the 130th Steel City derby had something to say about that.

Yes, United are joint top of the Championship overnight but they could have been two points clear of Leeds and Norwich had they converted just one of their chances. 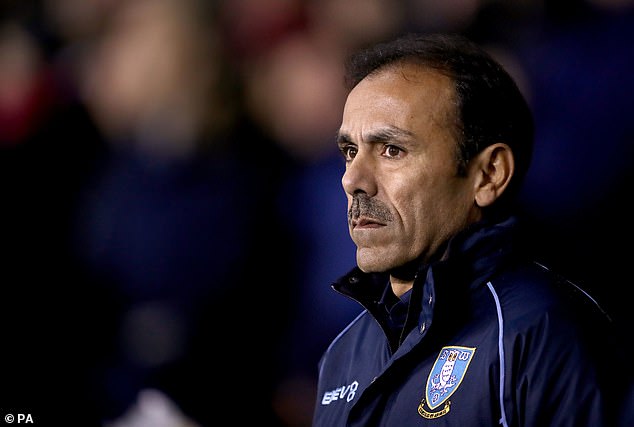 With the match in its dying minutes, Billy Sharp steered a header wide from an Ollie Norwood corner and then it was Norwood’s turn to force a save out of Dawson.

The Wednesday goalkeeper stood up to all that was thrown at him, pretty much from the minute John Fleck had the first meaningful shot with a long-range effort.

Questions have been asked of coach Jos Luhukay in recent weeks but this will have eased the pressure. It was his team’s first clean sheet of the season for a start. 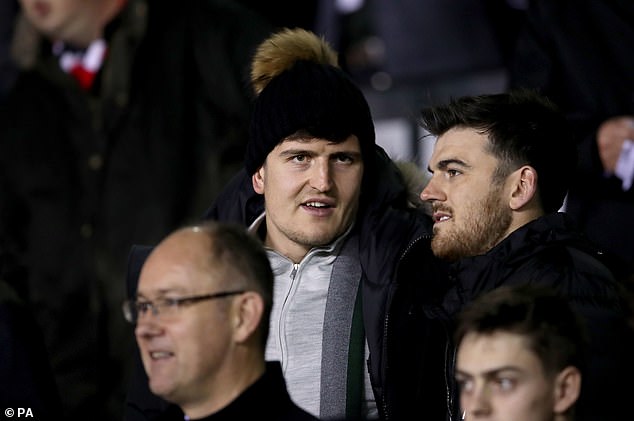 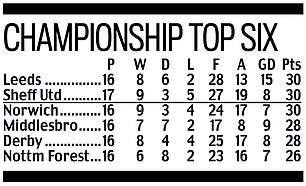 ‘You have to be happy when you are not losing games. Today the draw was very important,’ Luhukay said.

‘We were lucky that Cammie stopped the penalty at a very important moment. This was his biggest game up to now and he made a really good job.’

Wednesday were not an attacking force. United were up on the stats charts for chances, shots, corners and so on but the scoreline remained stubbornly stuck at zero. For that Wednesday deserve credit for some strong defending, sometimes six, seven, even eight men at the back.

The Bramall Lane crowd were getting slightly edgy, urging the players to find a way through the blue cul-de-sac but it was easier said than done. 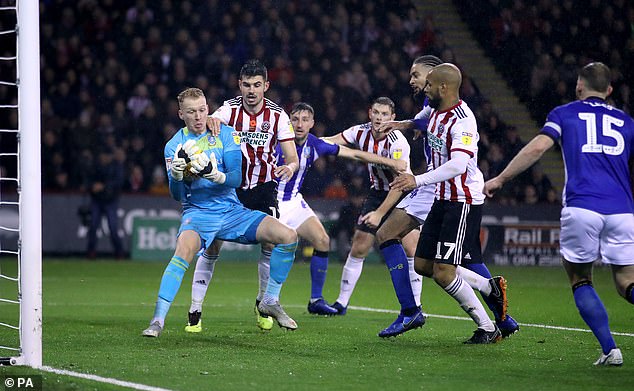 When the ever-willing McGoldrick fashioned an opening for himself, he was again foiled by Dawson.

Luhukay’s first game in charge of Wednesday was this fixture in January, again a goalless stalemate. He was under pressure after the four straight defeats but dismissed talk of his position.

‘I’m very relaxed. I do my best what I can give. In a season you have to have good periods and not so good periods. The last few weeks didn’t make me a bad manager,’ Luhukay said.

Certainly this has given him breathing space, thanks to Dawson. 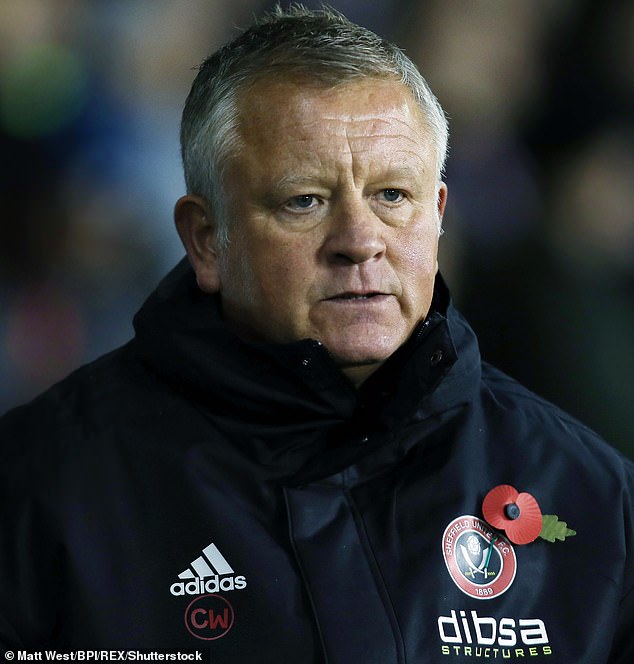