For a man who has Evian water sluicing through the pipes of his Ascot mansion, it seemed a perfectly normal request. He owned a property in Spain, but not only had he never visited it, he didn’t know exactly where it was. Possibly near Madrid?

Agent Andrew Lax claims that when he finally located the hilltop villa 40 miles north of the Spanish capital on behalf of its owner, the fabulously rich Emir of Abu Dhabi, Sheikh Khalifa bin Zayed al-Nahyan, there was a shock in store.

The permanent staff of 15 lined up to greet him like royalty and revealed he was the first visitor in 17 years.

Inside there were more surprises. In the kitchen — where no meal had ever been cooked — there were said to be unused appliances still wrapped in the manufacturers’ Cellophane.

While, it is said, once a week the sheets that had never been slept in were stripped from beds in the 11 bedrooms and, along with towels — monogrammed with the United Arab Emirates ruler’s personal motif — that had never dried a pair of hands, laundered by the devoted retainers.

The single visitor those 17 years ago was, apparently, the Sheikh’s son who pronounced it ‘too quiet’ and left without even staying a night.

The property was named Al Dhafra after an oasis town on the Persian Gulf. Just maintaining it with its open-air summer house lined with bullet-proof glass, patrolling guards and those staff keeping it pristine, was allegedly costing the Sheikh in the region of £450,000 a year.

Not that a man with a fortune of £18 billion — the world’s fourth richest royal after the King of Thailand, the Sultan of Brunei and the King of Saudi Arabia — would even notice!

But this would be by no means the only monument to mind-boggling wealth and profligacy of the rarely-seen president of the oil-rich UAE.

This week the High Court heard how Sheikh Khalifa was accused of reckless extravagance in a complex legal battle between him and the former managers of his £5.5 billion London property empire which includes the Berkeley Square estate in Mayfair, where tenants number Hermes, designer Alice Temperley and Annabel’s, the exclusive nightclub.

The case has revealed extraordinary claims about the eye-watering indulgence of the Sheikh, whose half-brother Sheikh Mansour owns Manchester City football club, and in particular his portfolio of luxury homes. The existence of a number of the properties were revealed in court papers.

Principal among them is Ascot Place, a Grade II-listed 18th century pile at Winkfield, Berks, on the edge of Windsor Great Park.

And nothing illustrates the money-no-object lavishness than the allegations of his wasteful ownership of this stunning property. He bought it in 1989 for a then record £18 million from Mick Flick, the Mercedes Benz heir.

Flick himself had only taken ownership the previous year but made a £3 million profit on the sale having bought it from Jack Heinz II, grandson of the baked beans tycoon HJ Heinz, who had quietly lived there for the previous 28 years.

Set in 400 acres of parkland with a lake, grotto and estate cottages, its tranquil beauty seemed to offer the perfect address for someone who prizes his privacy — with the Queen at Windsor Castle among its closest neighbours.

Nonetheless, Sheikh Khalifa decided it needed considerable upgrading to meet his exacting standards. His priority was to build a 6ft 6ins high wall around the four-mile perimeter. The ambitious project, estimated to cost £2 million, required enough bricks to build 150 five-bedroom houses. But it failed to meet the approval of local planners, who refused him permission.

So he turned his attention to the house itself and where, according to documents, he installed vast underground tanks which were filled with mineral water shipped from the spa town of Evian-les-Bains in the French Alps, where the Abu Dhabi royals own other homes. 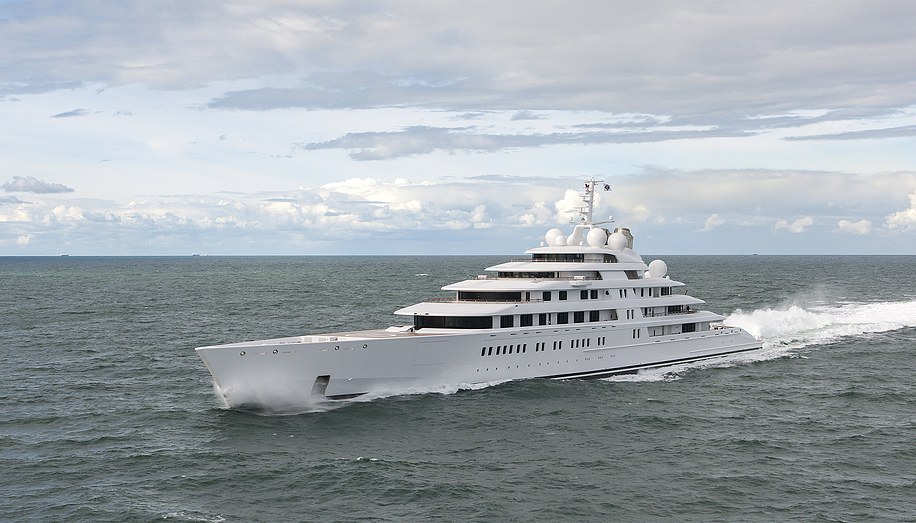 There is a royal yacht, though such is the scale of the Azzam that calling it a yacht barely does it justice. At 590ft it is the largest private ocean-going yacht in the world

‘The tanks were as big as a multi-storey car park,’ claims someone who has visited. ‘Apparently he didn’t like the local water so he had his own shipped in by tanker and pumped through the pipes.’

The directors of Lancer Property Asset Management, who are being sued for ‘tens of millions of pounds’ in damages by the Sheikh’s companies, claim however that, ‘apart from the occasional daytime visit,’ 71-year-old Sheikh Khalifa has never occupied the property.

Behind its handsome facade, Ascot Place was, according to a source, never ‘big enough to become a royal palace’.

Possibly because when he travels on his own private 747 jumbo jet it has been claimed that he brings an entourage —who fly separately on a 737 — of 100 staff including his personal beard trimmer.

Another ‘very grand’ home had been purchased for £5 million in 1980: Ham Gate, a Regency property adjacent to Richmond Park in south west London. But this, too, was said to be too small to house all his staff and security personnel.

In that instance, court papers say, he instructed his agents to buy a neighbouring property, only for the owner — a music impresario who was offered ‘significantly above the market value’ — to refuse to sell.

In 2013, when a lavish party to mark an official visit to the UK was planned at the Ham address, staff were allegedly given four months to landscape the grounds, cutting down mature trees and replacing them with new pre-grown ones. They were also required to buy several nearby homes to accommodate guests for the night of the party and the subsequent night. 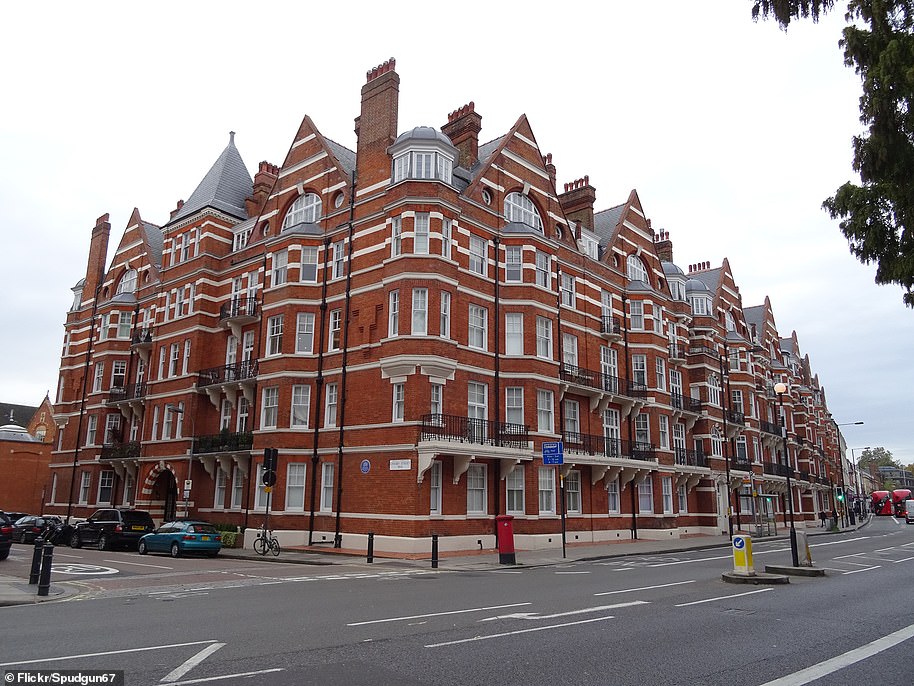 The High Court heard that the Sheikh’s assets have included about 140 properties in the most affluent areas of London, including Mayfair, Marylebone, Knightsbridge and Kensington (pictured is one of the properties he owns in Kensington)

Documents filed in the High Court claim that Sheikh Khalifa also owned several properties worth an estimated £30 million in a fashionable enclave overlooking Cannes in the south of France, one of which had its own private funicular connecting the house to the beachside resort.

These, though, were said to have been abandoned in disrepair when the Sheikh failed to obtain permission to construct a new palace. Not far along the Riviera, there is understood to be another home at Antibes, while on the shores of Lake Geneva is the Sheikh’s main French residence at Maxilly-sur-Leman near Evian.

Which throws up another of his eccentricities. Because when he is in residence, it is claimed, the house is restocked with supplies flown in from his Gulf state every other day. And, yes, bottled water is said to be included.

Sheikh Khalifa’s property empire extends way beyond Europe. In the Seychelles he has built a vast seven-storey mountain-top palace having appeased local opposition by pledging £100 million in aid to the island after its builders were accused of causing massive pollution to rivers and water systems. 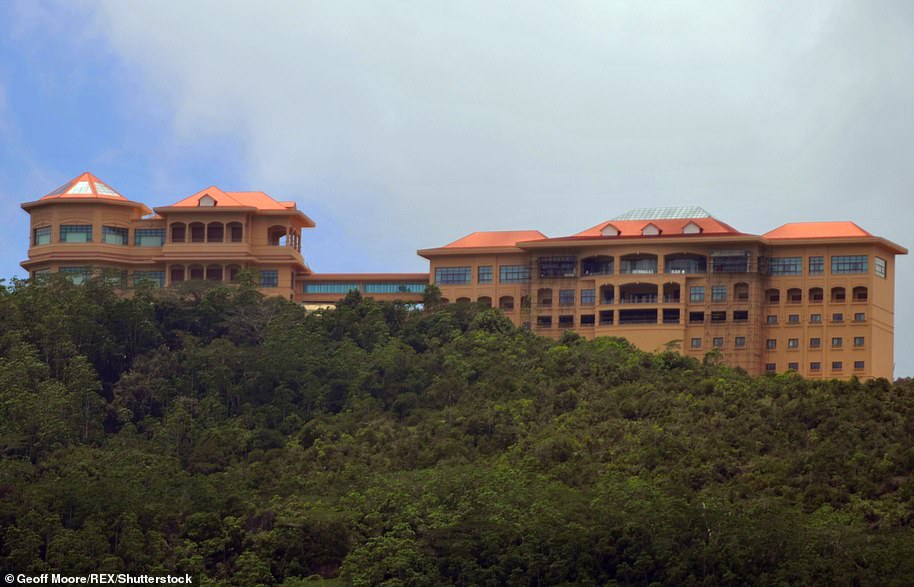 The royal built a lavish palace and compound on the highest spot of the Seychelles, La Misere, main island, on the site of a former US tracking station

And, of course, there is a royal yacht, though such is the scale of the Azzam that calling it a yacht barely does it justice. At 590ft it is the largest private ocean-going yacht in the world.

It has pools, indoor and outdoor, a helipad, naturally, and state rooms for 36 guests. It is said to have cost £490 million and taken four years to build while its annual running expenditure is reported to be £48 million. Even maintaining such a beast of the seas did not apparently curb the Sheikh’s spending.

For the court papers also disclose how Andrew Lax was instructed to locate and buy a house close to Washington for the use of Sheikh Khalifa, who was scheduled to make an official visit to the U.S. but did not like staying in hotels.

For this one transaction Lax was given a budget of £20 million. According to a source close to the case, the Sheikh’s only requirement was that the property should possess underground parking so that he could move from his bullet-proof car into the house unobserved.

Several would-be homes were identified including one owned by a founder of the online service provider AOL and another called Hickory Hill, which was the Kennedy family mansion.

But after trouble erupted in the Middle East, the visit was scrapped and the planned purchase cancelled.

These revelations are among the latest disclosures from the court battle between the directors of Lancer Property and Berkeley Square Holdings, a set of companies registered in the British Virgin Islands, whose ultimate owner is Sheikh Khalifa and his family.

For 16 years, Lancer Property was employed as real estate manager and adviser to the Abu Dhabi royal family, who were revealed in leaked documents known as the Panama Papers to have amassed one of the largest offshore property empires in Britain.

The High Court heard that the Sheikh’s assets have included about 140 properties in the most affluent areas of London, including Mayfair, Marylebone, Knightsbridge and Kensington.

Among the famous buildings he owns are the Jack Barclay car showroom on Berkeley Square, The Footman pub in Charles Street and the historic Guinea Grill in Bruton Place, as well as the former BHS building on Oxford Street.

In 2017 Lancer were sacked and have been accused of ‘siphoning off’ around £32 million while managing the Sheikh’s London estate.

Lawyers for the Sheikh’s companies claim the firm’s fees were excessive and that there was a ‘dishonest arrangement’ with the former chairman of the Sheikh’s private office.

Lancer’s directors, including founder Andrew Lax, deny the allegations and say the payments were approved by the Sheikh. They are counter-suing for £11 million in unpaid fees.

In their amended defence to the court, the firm say they ‘witnessed profligacy’ that dwarfed the sums it charged.

They also plan to use as evidence a document with the ‘purported signature’ of Sheikh Khalifa which they claim ‘did not match known examples but rather appeared to match that of his brother Sheikh Mohammed’.

Since suffering a stroke in 2014, Sheikh Khalifa has largely withdrawn from public life. Day-to-day control of the UAE’s affairs are handled by Sheikh Mohammed, known by his initials MBZ, who is the Crown Prince of Abu Dhabi.

Lawyers acting for Berkeley Square Holdings have denied the Lancer claims that Sheikh Khalifa has suffered ‘mental incapacity’ and have branded the allegation of profligacy as ‘irrelevant and embarrassing’.

All the same, amid such claims of excess and swirling rumours, the case is poised to become increasingly murky.

Meanwhile, it is tempting to wonder where the Sheikh’s acquisitiveness for property may come from.

Step forward Khalifa’s father and former UAE ruler Sheikh Zayed, who died in 2004. He too had a string of homes. In 1988 he bought Tittinghurst Park, once owned by John Lennon before he sold it to fellow Beatle Ringo Starr.

By the time Zayed had finished with it, the pretty house that inspired Lennon to write Imagine had undergone a gaudy transformation into a gold and marble palace straight from the pages of Arabian Nights.

Ironically, his son has always wanted to be taken seriously rather than be regarded as just the latest oil rich Sheikh with more money than sense. It is why he spent £20 billion hiring the world’s best architects and licensing some of the most famous museum brands — the Guggenheim and the Louvre — to transform his sun-dried state into a cultural oasis.

For now though, he is more famous for installing drinking fountains that dispense Evian water in his Ascot mansion — even though the house has never been occupied.