Shell is ditching the Netherlands and moving its headquarters to London in a move ministers lauded as a victory for post-Brexit Britain.

The FTSE 100 oil giant said it wants to abandon its dual structure and simplify into one company, based in the UK.

And the company will drop the ‘Royal Dutch’ part of its name, which it has held since 1907.

Capital idea: FTSE 100 oil giant Shell said it wants to abandon its current dual structure and simplify into one company headquartered in the UK on London’s South Bank (pictured)

Business Secretary Kwasi Kwarteng hailed the move, saying it was a ‘clear vote of confidence in the British economy as we work to strengthen competitiveness, attract investment and create jobs’.

Shell, which produced around 2m barrels of oil a day before the pandemic struck, said the shift to London would help it speed up efforts to turn the company into a renewables powerhouse.

Analysts said it could also take the pressure off a legal case brought against Shell in the Netherlands that has forced the company to speed up its carbon targets.

A court ruling in May said that by 2030 the group must reduce its net carbon emissions by 45 per cent compared with current levels.

Shell had vowed to reach net zero – meaning it will balance out any emissions it produces – by 2050. But it had not said where it aimed to be by 2030, stoking anger among campaigners.

It is appealing the ruling, and chief executive Ben van Beurden has repeatedly said that the only way the company will be able to afford to invest billions in green technologies will be to use the vast sums of money generated from its traditional oil and gas business. 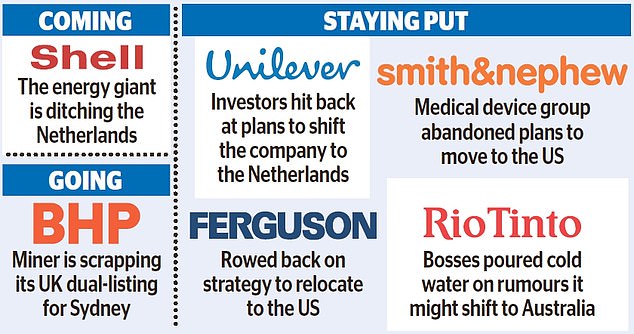 According to industry sources, van Beurden – who is Dutch – has been pondering a move to London since he took over as chief executive in 2014.

Since 2005, Shell has been registered in the Netherlands for tax purposes and had its worldwide headquarters in The Hague.

But under new plans, all meetings of executives and board members will happen in the UK, while van Beurden and finance boss Jessica Uhl will move permanently to Shell’s UK headquarters on London’s South Bank.

Shareholders will still need to sign off on the plans at a vote held on December 10.

The news comes shortly after Third Point, an aggressive hedge fund led by investor Daniel Loeb, built up a substantial stake in the company and is urging it to split into multiple entities, which Shell has refused to do. 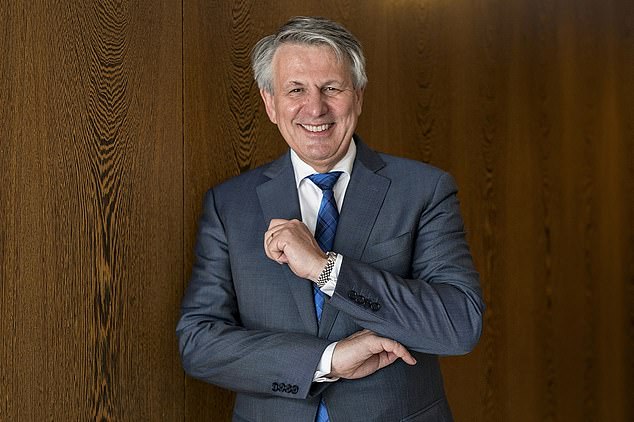 Long-term plan: According to industry sources, Shell boss Ben van Beurden – who is Dutch – has been mulling a move to London since he took over as chief executive in 2014

But Dutch politicians said the move was an ‘unwelcome surprise’ and are now making 11th hour attempts to keep Shell in the country.

Officials from the Dutch government said they were seeking to find a last-minute parliamentary majority to scrap a controversial 15 per cent dividend tax that Shell has previously complained about.

Shell, which will keep listings in Amsterdam and New York, claims that being a London-based company will make it easier for shareholders to understand and will simplify how it buys back shares from investors.

This has become important after the group slashed its dividend by two-thirds during the pandemic last year and is relying more on buybacks as a way to hand cash back to investors.

Adam Matthews, chief responsible investment officer at Shell investor, the Church of England Pensions Board, said: ‘If this decision will enable the company to be more agile in executing its transition to net zero and strengthening shareholder rights, then it should be viewed positively.’

But he added that the deal should not be used by Shell to get out of the May court ruling.

Shell said its move to the UK will have ‘no impact’ on these legal proceedings or any others in progress. Two weeks ago, when it reported third-quarter profits of £3billion, Shell said it would slash emissions by 50 per cent by 2030 – though it could only do so using oil and gas money.