Shinzo Abe closes in on victory in Japanese elections

The Japanese Prime Minister’s ruling coalition has fallen short of the ‘super majority’ needed to reform the country’s pacifist military, according to reports.

Shinzo Abe, 64, who has already served a six and a half year term and is on course to become Japan’s longest-serving Prime Minister in November secured 68 seats in the upper house as of midnight.

Abe’s Liberal Democratic Party (LDP) and its junior partner, the Komeito party, were assured 71 of the 124 seats being contested in parliament’s 245-seat upper house, NHK showed.

But the ruling bloc and its allies fell short of the 85 seats needed to retain the two-thirds ‘super majority’ required to begin revising the constitution’s pacifist Article 9 to further legitimise the military, a controversial step.

In order to reach the two-thirds majority needed to propose constitutional reform, Mr Abe needed support from members of another conservative party and independents.

Media surveys had suggested Mr Abe’s ruling bloc was to keep its majority in today’s election, with most voters claiming it was a safe vote over a newly-formed opposition with no proven track record.

‘I believe the people chose political stability, urging us to pursue our policies and carry out diplomacy to protect Japan’s national interests,’ Mr Abe said in an interview with NHK.

To reach this two-thirds majority, or 164 seats, Mr Abe needs 85 more seats for his ruling bloc and supporters of change.

He hopes to revise Japan’s pacifist constitution, which does not allow the country to grow its military or wage war, by the end of his term in 2021.

Following the vote, Mr Abe said he would continue trying to expand support for the revision even if the pro-revision group misses a super majority in the election.

Abe said the size of the victory showed voters wanted to debate changing the charter for what would be the first time since its enactment after Japan’s defeat in World War Two.

‘Of course, we cannot take the timing as a given, but I would like to achieve it (constitutional reform) somehow during my term,’ Abe said on television on Sunday evening. His term as LDP president runs until September 2021.

Changing the charter would be hugely symbolic, underscoring a shift away from post-war pacifism already underway.

Article 9, if taken literally, bans maintenance of a military but has been stretched to allow armed forces for self-defence.

Without the two-thirds majority, Abe is likely to try to lure other opposition lawmakers to back his proposal to enshrine the military in the constitution, but that could be tough with a lower house election certain between now and 2021. 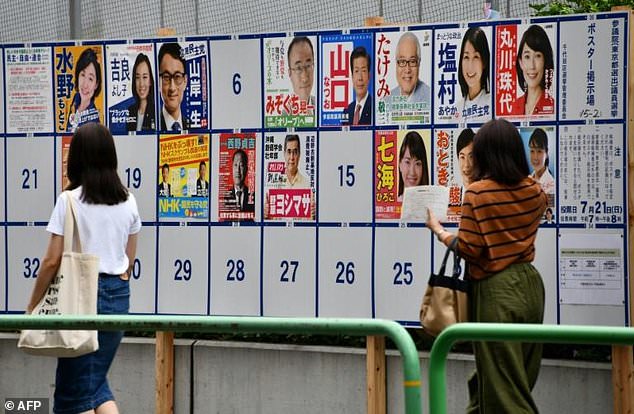 Mr Abe has pledged to ‘clearly stipulate the role of the Self-Defence Forces in the constitution’.

The provisions, imposed by the United States after World War II, are popular with the public at large, but reviled by nationalists like Mr Abe, who see them as outdated and punitive.

However, any constitutional revision also requires approval in a national referendum.

While the ruling coalition appeared to win voters’ confidence, ‘tough situations are still ahead,’ said Koji Nakakita, professor of politics at Hitotsubashi University in Tokyo.

Among his imminent tasks is to ‘smoothly’ raise the consumption tax to ten percent in October as part of efforts to ease swelling social security costs in the ‘ultra-aged’ country, Nakakita said.

‘Also, the trade dispute with the US is a headache while it’s hard for Japan to make a decision on Hormuz,’ he said, referring to US calls for an international flotilla to escort oil tankers through the Hormuz Strait.

Mr Abe, who wants to bolster Japan’s defence capability, is now proposing adding the Self-Defence Force, or Japan’s military, to the war-renouncing Article 9 of the constitution. He said he is not considering running for another term.

Mr Abe said resolving the decades-old issue of Japanese citizens abducted by North Korea and signing a peace treaty with Russia would be his diplomatic priorities during the rest of his term. 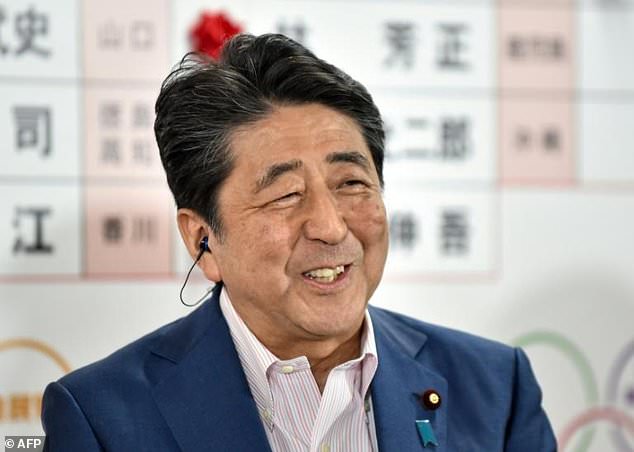 Opposition parties have focused on concerns over household finances, such as the impact from the upcoming ten per cent sales tax increase and strains on the public pension system amid Japan’s ageing population.

He has prioritised revitalising Japan’s economy and has steadily bolstered the country’s defences in the backdrop of North Korea’s missile and nuclear threats and China’s growing military presence.

He also has showcased his diplomatic skills by cultivating warm ties with President Donald Trump.

The main opposition Constitutional Democratic Party of Japan and three other liberal-leaning parties teamed up in some districts. They stressed support for gender equality and LGBT issues – areas Abe’s ultra-conservative lawmakers are reluctant to back.

At a polling station in Tokyo’s Chuo district on Sunday, voters were divided over Abe’s 6 1/2-year rule.

A voter who identified himself only as a company worker in his 40s said he chose a candidate and a party that have demonstrated an ability to get things done, suggesting he voted for Abe’s ruling party and its candidate, as ‘there is no point in casting my vote for a party or a politician who has no such abilities.’

Another voter, Katsunori Takeuchi, a 57-year-old fish market worker, said it was time to change the dominance of Abe and his ultra-conservative policies.

‘I think the ruling party has been dominating politics for far too long and it is causing damage,’ he said.

Abe’s LDP and its coalition partner Komeito were forecast to take between 67 and 77 of the 124 seats – about half the chamber – up for election yesterday, according to NHK.

The two parties control 70 seats in the half of the 245-seat chamber that is not being contested, putting them on track to maintain their overall majority. 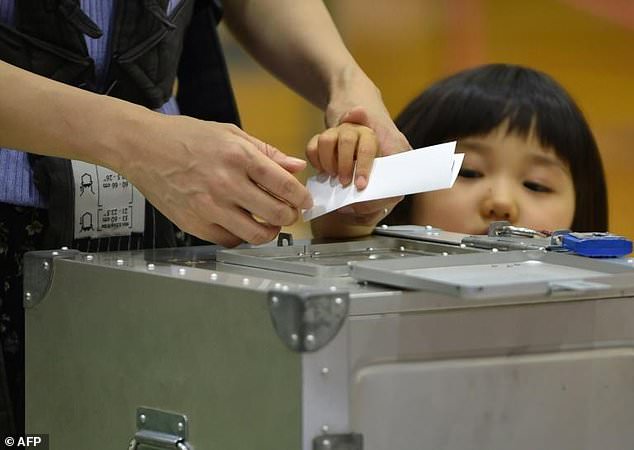 While Abe has claimed victory, voter turnout is expected to be lower than 50 percent for the first time since the 1995 election

NHK’s projection and similar estimates by other media are based on exit polling and other analysis.

Final numbers were not expected until Monday at the earliest.

‘The results, which were within expectations, indicated that voters chose the status quo, not a change,’ Shinichi Nishikawa, professor of political science at Meiji University in Tokyo, told AFP.

Abe is almost certain to stay in power until November when he will break the record for the nation’s longest-serving premier held by Taro Katsura, a revered politician who served three times between 1901 and 1913.

Local media also predicted that forces in favour of revising the constitution, led by Abe’s LDP, were set to win close to 85 of the seats up for grabs, giving them a ‘super majority’ in the chamber.

Voter turnout was expected to be lower than 50 percent for the first time since the 1995 upper house election, NHK said.

‘I support the current government because I see no alternative,’ said Yoshiko Iida, a 45-year-old beauty therapist.

‘Opposition parties are woeful,’ she told AFP. ‘I don’t want to leave power to them.’

Susumu Rokkaku, an 85-year-old male pensioner, said: ‘I voted for an opposition candidate but whoever is elected, nothing will change. I have no expectations.’