Greece was battered by cyclone ‘Zorba’ today which brought flash floods and torrential rain across parts of the country.

Ships were submerged and partially destroyed by the extreme weather, while ships were held at Greece’s main ports. There was heavy delays to traffic and power outages were reported.

Firefighters received dozens of calls for assistance to remove downed trees and other objects and help evacuate people trapped in cars and flooded homes.

A view of a flooded yacht haven in Epidavros, where strong waves and heavy winds have been registered due to the passage of Mediterranean Cyclone 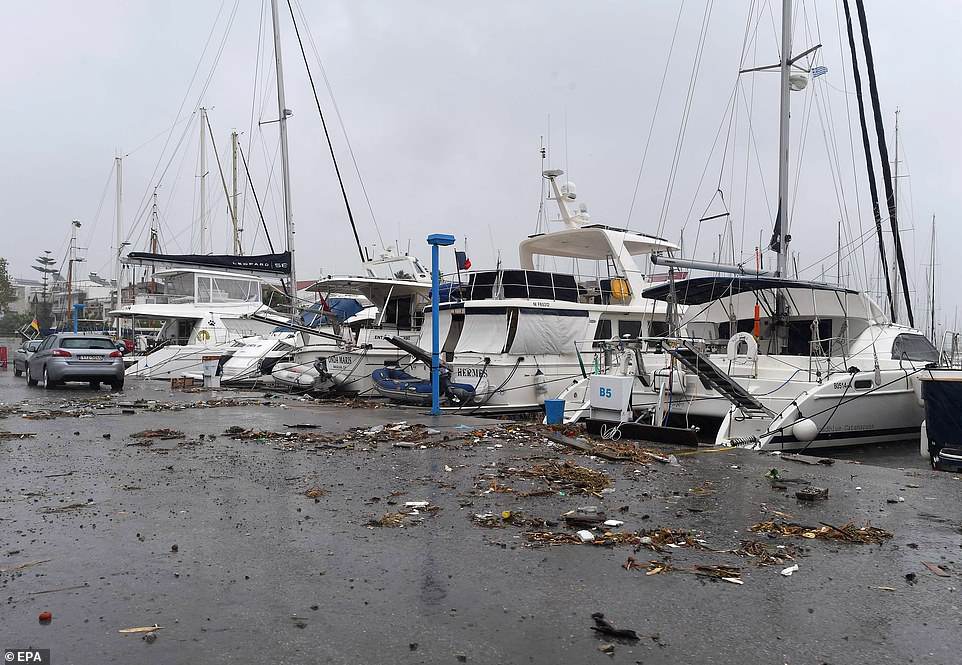 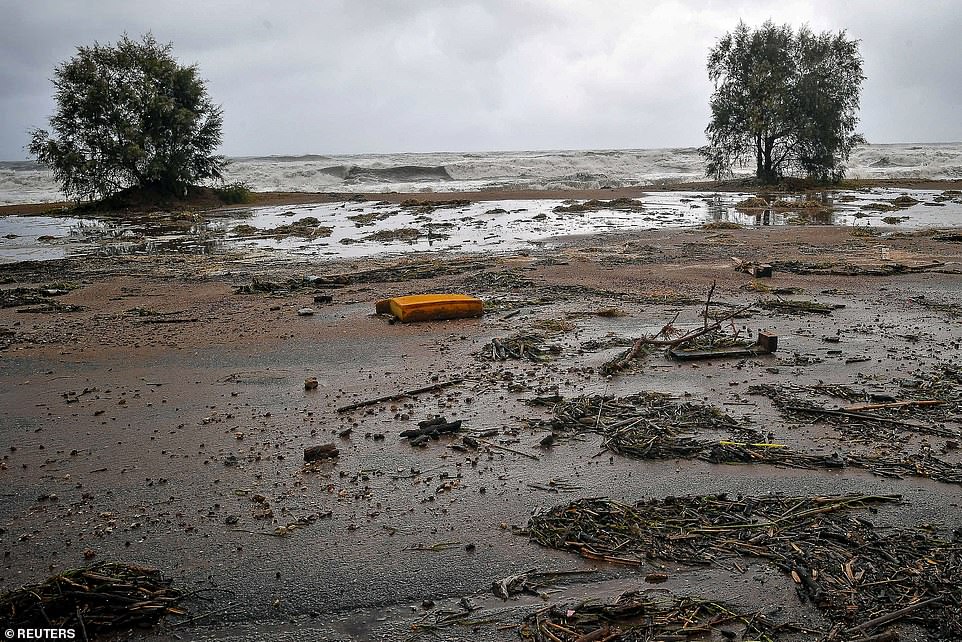 A shot of the seaside following a cyclone in Kalamata, Greece. The areas mostly affected by the weather was in the southern Peloponnese peninsula

The areas mostly affected by the weather was in the southern Peloponnese peninsula. Television images showed flood streets which resembled rivers in the wider area of Corinth and massive sea waves crashing into the shores of coastal towns in the region.

Regional governor Petros Tatoulis said homes, infrastructure and fields had been ruined by the flooding.

He said: ‘The Peloponnese is holding on despite the impact and the side effects of this extreme weather phenomenon.’ 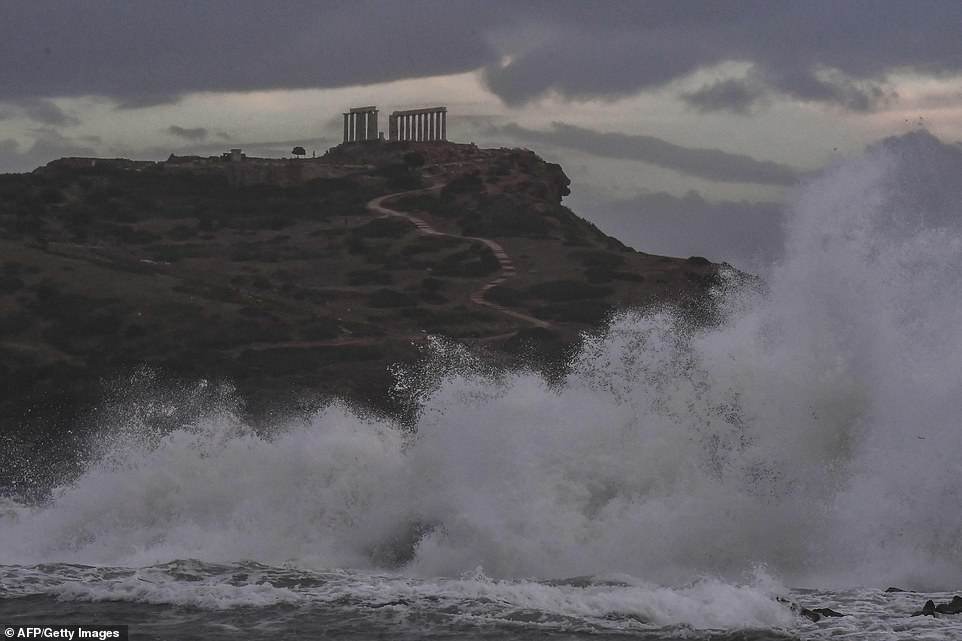 Waves hit the cliffs in front of the ancient Temple of Poseidon at cape Sounion, in southern Athens 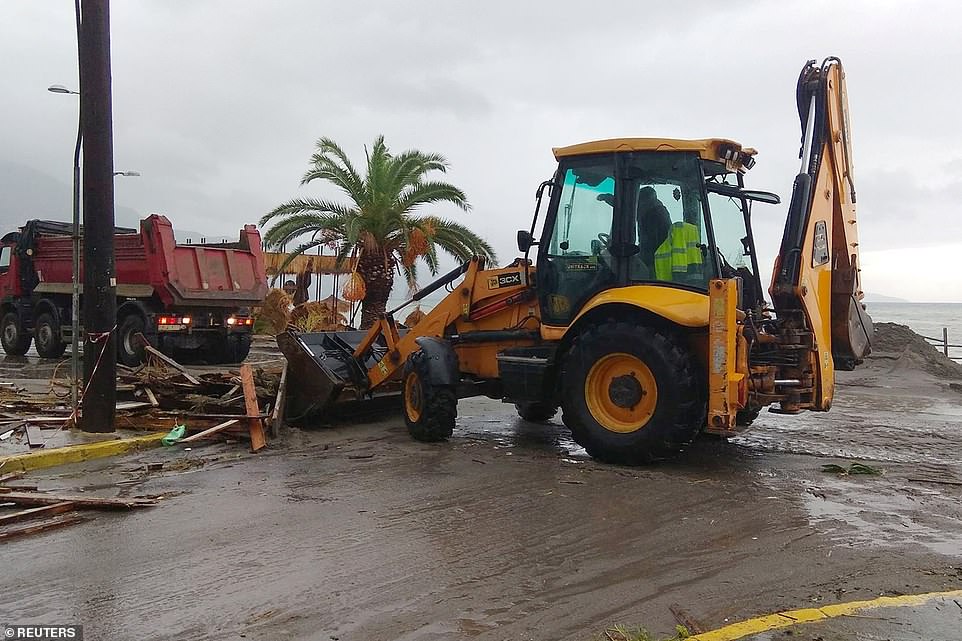 Temperatures plunged by around 10C this week, and wind speed in the area topped 56 miles per hour in several areas and were forecast to intensify.

The civil protection service has urged municipalities to be on the alert and called on citizens to take precautions.

Authorities were also concerned that the tropical storm could bring mudslides and floods in the wider Athens area, which was recently hit by deadly fires and flash floods.

In August, blazes in the area of Mati killed at least 99 people. Last year, 24 people were killed and scores were left homeless after a rain-swollen torrent inundated two coastal towns west of the capital.

Parts of the national road leading to those areas were blocked by police in advance. A view of flooded roads in Argos, where strong waves and heavy winds have been registered due to the passage of Mediterranean Cyclone ‘Zorba’ 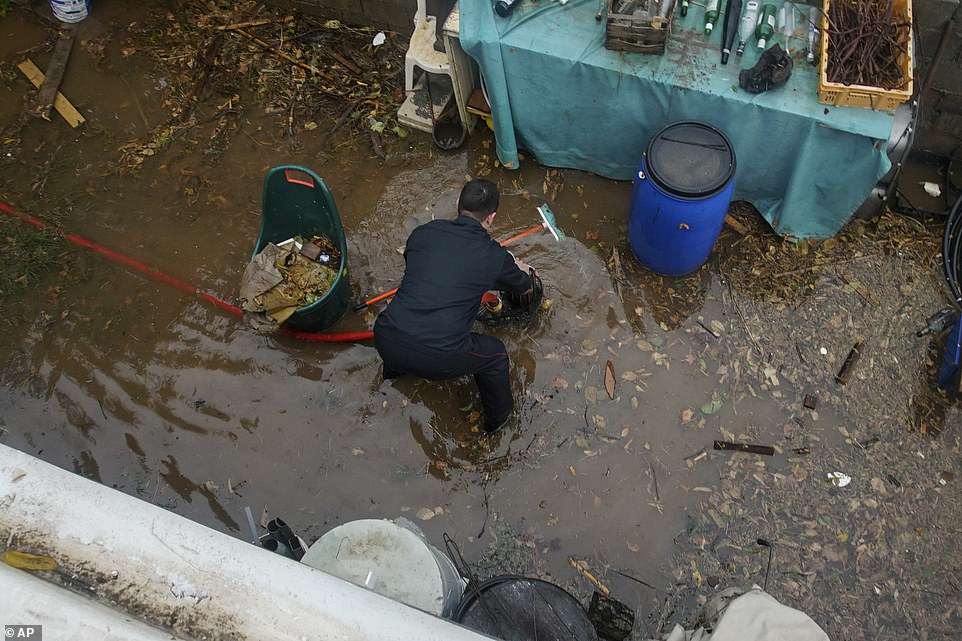 A firefighter tries to drain water from a house after a storm hit Kalamata town, southwest of Athens