A furious son-in-law has blasted an online florist for ruining Mother’s Day after claiming he ordered a £42 bouquet that only came with seven flowers.

Jason Knight, from Shirebrook, Derbyshire, bought the large bunch of roses and lilies on the internet but was left stunned when he opened the delivery to find just a handful of blooms.

He had ordered the gift, along with a vase, from Prestige Flowers on February 25 for £42.48 to give to his partner’s mum Debra McCahill, 55.

But the warehouse worker said he was left fuming when the opened the ‘ridiculous’ bouquet yesterday to find a few ‘half-dead looking’ roses.

Jason Knight, from Shirebrook, Derbyshire, has blasted an online florist who sent him just seven flowers in a bouquet he spent £42 on (pictured: Mr Knight and the bouquet he received) 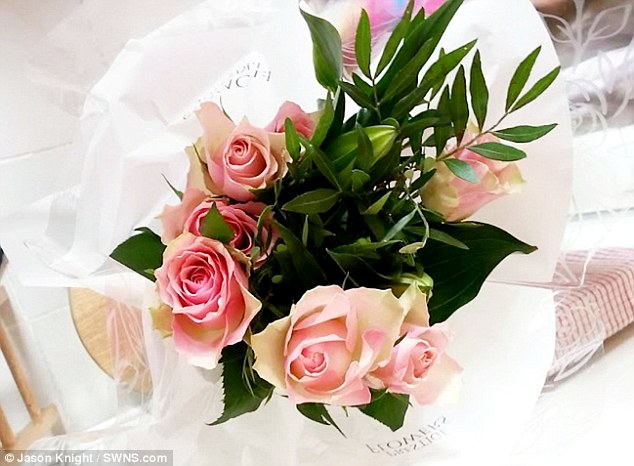 The 24-year-old ordered a large bouquet from Prestige Flowers (pictured: the photo on their website of the bouquet) to give to his mother-in-law on Mother’s Day

The 24-year-old is now demanding a refund from the company, which offers a ‘one hundred per cent satisfaction guarantee’ on their website.

He said: ‘There’s seven flowers for about £40 – I’d have thought it’d be a lot larger and it was a pretty lacklustre effort by the florists.

‘They sent me an email saying they have sent a medium – but that’s not right because its not a medium either. On the site even the small bouquets look bigger than this.’

Mr Knight paid £5.99 for the vase, £5 on delivery and the rest on the bouquet, but after receiving the flowers he has claimed ‘a child could have done better’.

He added: ‘Its about £6 a flower and the roses look half dead. It’s the first time I’ve used this company and I wont be ordering from them again. 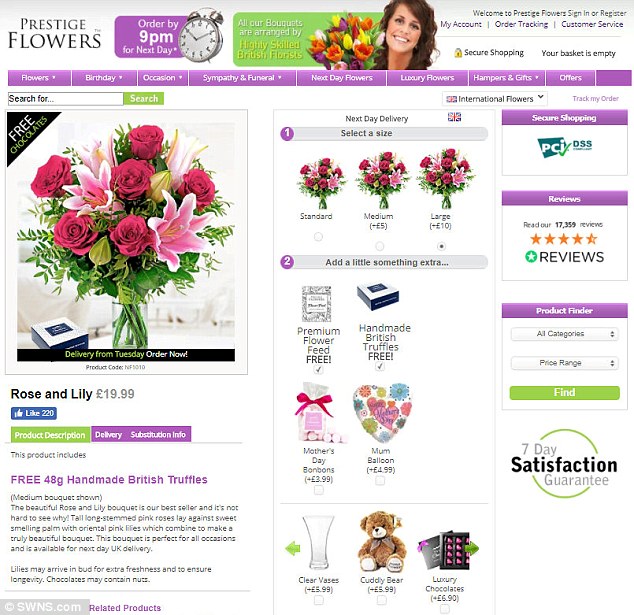 He said: ‘It just ruined Mother’s Day to be honest, it’s just ridiculous – I just couldn’t bring myself to give the flowers to my mother-in-law.’ The florist claims they sent him a medium bouquet instead of a large (pictured: their website)

‘You probably get more from a supermarket or petrol station, you can get a lot more for under £20.

‘It just ruined Mother’s Day to be honest, it’s just ridiculous – I just couldn’t bring myself to give the flowers to my mother-in-law.’

Mr Knight boxed up the flowers and is now attempting to get a full refund from the company.

He said: ‘If you compare the pictures on their website to what I received – it is clearly false advertising. I was very angry.’