Shirley Ballas, 61, in the living room of her home in south London

My haven, Shirley Ballas: The Strictly head judge and leading dancing coach, 61, in the living room of her home in south London

Here I am with my first male dance partner, David Fleet. I danced with him from the age of 11 to 14 and this is our very first competition together, in 1972. We got this little trophy and I felt as if I’d won the lottery. It was an unforgettable thrill. David was a sensational partner – much better than me at the time – and his parents were very good to me. They took me in at weekends and drove me to competitions.

I adopted Charlie, my five-year-old Lhasa Apso dog, when my US-based son Mark learnt he was going to be euthanised and begged me to take him. I fell in love instantly and Charlie flew to the UK with me when I got the Strictly job. He’s the most adorable ball of scruff. I pinch myself every day that I was given the opportunity on Strictly as a 57-year-old woman. I love every minute of being on the show.

My older brother David committed suicide in 2003 at the age of 44, lost in depression. It was a terrible shock. David and I grew up in the Wirral with our mother Audrey. David was my father, brother and friend, very protective of me and all those without a voice. His ashes are here and we speak of him constantly. He’s a powerful force in our lives. 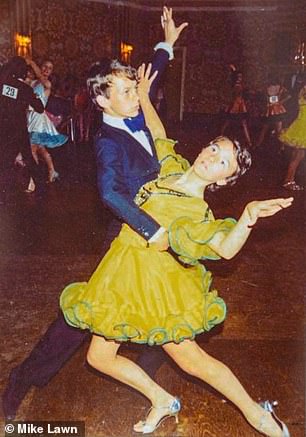 Here I am with my first male dance partner, David Fleet. I danced with him from the age of 11 to 14 and this is our very first competition together, in 1972

Mark made me these ornaments in his school art class as a surprise for me (that’s him as a child in the photo). I’ve taken them all over the world with me. He’s now 35 and a talented actor, musician and singer who’s starred in many shows, including on Broadway. Although dancing is my passion not his, he’s also a pro dancer on the US version of Strictly, Dancing With The Stars, and has won it twice. His wife BC Jean is a singer-songwriter and wrote If I Were A Boy for Beyoncé.

My mother, who is my rock and will soon come to live with me, started taking me to ballet classes when I was two years old. These were my first shoes. Then, aged seven, I saw all these adults dancing what I now know was the cha-cha-cha at the back of my local church hall. I asked the organiser if they had children’s classes and when he told me they were starting the next week, I said, ‘I will be there!’ I’ve never taken a break from ballroom dancing since. That day opened a magic door to my life. The music found me and dance found me.

In 1989, Tom Cruise wanted to learn the salsa, not for some acting job but to be able to attempt the dance with his very tall fiancée Nicole Kidman and manage it with grace. Fortunately I had a big friend who came along and assisted me called Alan Grundy. He is 6ft 3in so he took the female role to dance with Tom. Tom was a very sweet person and a great dancer. In the two hours we worked on the salsa he did very well. This is us together in the studio.

Behind The Sequins by Shirley Ballas is available in paperback now.