Shirley Ballas has revealed she’s returned to counselling since writing her memoir to ‘learn to love herself’.

The Wallasey-born Strictly Come Dancing judge, 60, admitted she found penning the book, entitled Behind the Sequins: My Life, ‘really difficult’ and ‘rather overwhelming’.

The star also opened up about her first marriage to professional dancer Sammy Stopford, claiming she felt ‘so alone and isolated’ – and credited new boyfriend Danny Taylor with helping her to overcome her self-esteem issues.

Speaking to Platinum magazine, Shirley said: ‘If I’m to be perfectly candid, since I’ve written the book I’ve actually gone back into counselling to try to sort my feelings out’

‘I found it a really difficult write, a more difficult read and even harder to talk about.

‘I feel like I’m looking in on somebody else’s life because when I put it all together in one context and not in bits, it’s rather overwhelming.

‘I’m learning that I am good enough, that I am a vulnerable but good person, how I don’t like praise and noise and I’m self-critical all the time, but that I need learn to love myself. Even though I’m 60, I’ve learned it’s never too late.’

Shirley has been married twice; her first husband was Sammy, whom she wed in April 1980.

The duo were dance partners – though at the time Shirley was an unknown amateur – and soared to number one in the world rankings in the professional Latin category, which they held for two years. 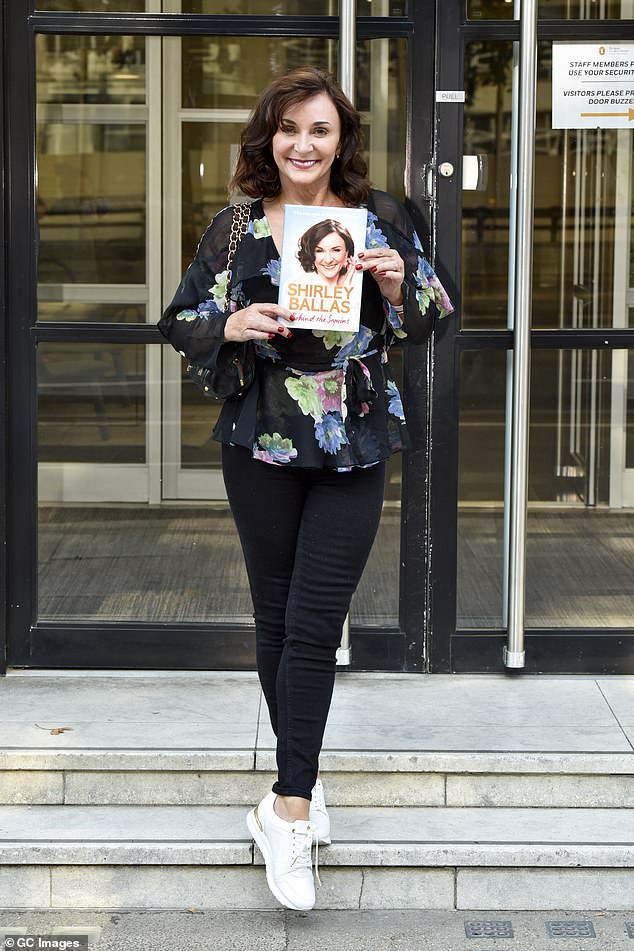 The Strictly Come Dancing judge, 60, admitted she found penning the book, entitled Behind the Sequins: My Life, ‘really difficult’ and ‘rather overwhelming’

The couple split in February 1984. Shirley told Platinum she struggled with the ‘work, work, work’ nature of their relationship, adding: ‘I wasn’t nurtured, shrouded in a love cloak.’

She married Corky Ballas – also a dancer, with whom she has a son, Mark – a year later, but admitted she was ‘fragile and drained’ in both partnerships.

Shortly after Mark was born, Shirley and Corky regularly left him in her mother Audrey’s care – ‘sometimes for three months at a time’ – while they travelled the globe.

‘I used to sneak his pillow into my luggage so I could cuddle it whenever missing him became too much. It was a heartbreaking time,’ Shirley admitted. 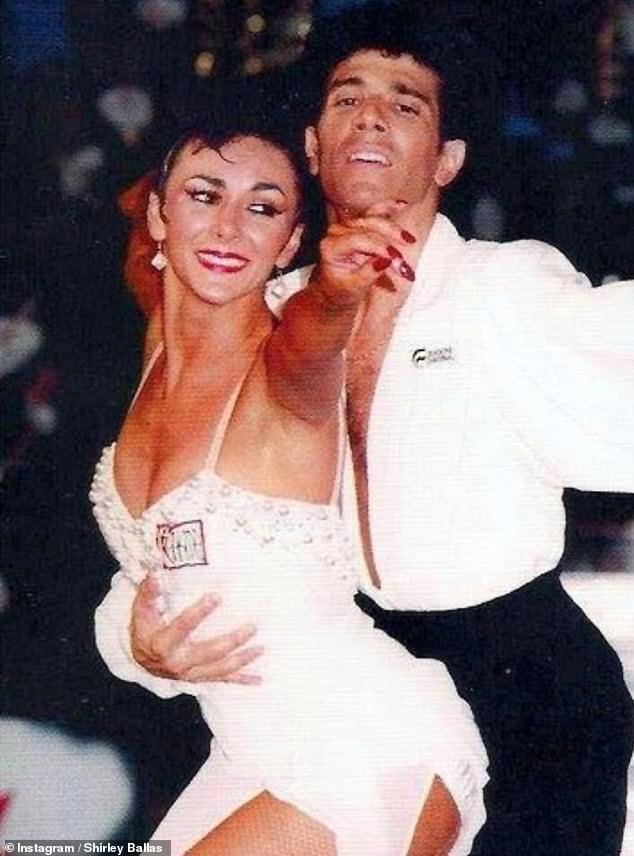 Throwback: Shirley has managed to maintain her youthful looks over the decades (pictured in an undated snap with her ex Corky) 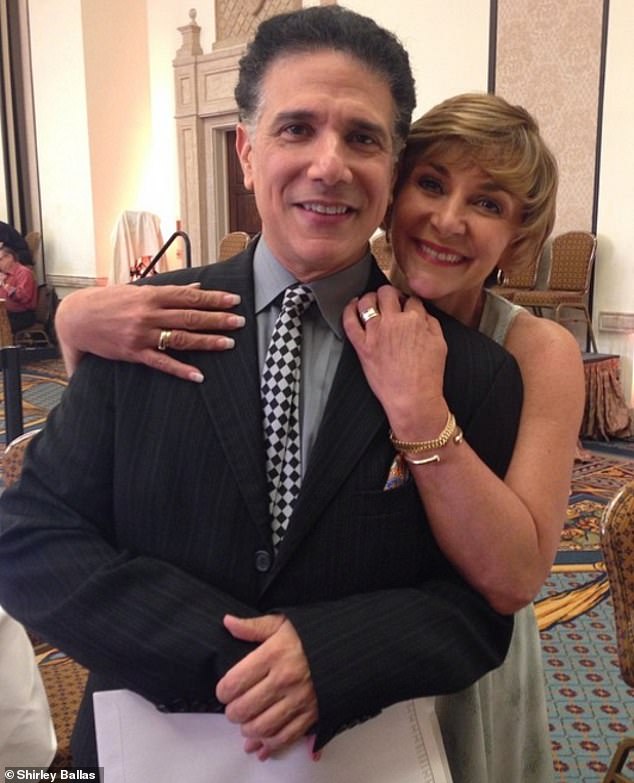 Shortly after their son Mark was born, Shirley and Corky (pictured together) regularly left him in her mother Audrey’s care – ‘sometimes for three months at a time’ – while they travelled the globe

‘I was always striving for that career and finances and somewhere he got lost. I missed five Christmases, I wasn’t there when he had chicken pox.

‘He’s 34 now. Where were those first 10 years of his life? If I could go back, I would say to a new mother, “Spend every minute that you can, enjoy every second of the toddling, of the walking, of the disease, of the crying because in the blink of an eye that time is gone. You’ll never get it back”.’ 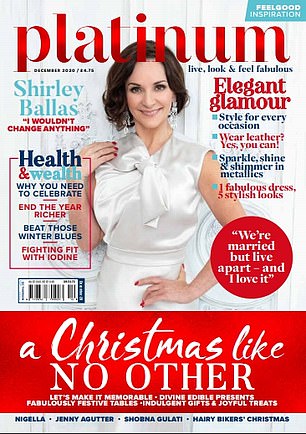 Shirley’s interview appears in the December edition of Platinum magazine

Today, their mother-son relationship is solid, with Mark, who lives in Los Angeles with his wife, texting her every night.

Despite her struggles, Shirley said she ‘wouldn’t change any of it for anything’, adding: ‘Those experiences have shaped me into the person that I am.’

She credits actor Danny, 48, for encouraging her to be ‘truly, truly’ herself.

‘There were many downs to lockdown, but what was it good for? I actually got to know Danny inside and out. For that, I’m truly grateful,’ she said.

Shirley, who has spoken openly about her family’s history with breast cancer, had her breast implants removed in October last year, and confessed she didn’t want to show Danny her scars at first.

‘He looked at me and said, “I’ve got two permanent smiley faces looking back at me”,’ she revealed.

‘They’re not as perky as they were, but they smile! He loves that. It’s sweet. I get a lot of confidence from the fact that my boyfriend is very non-judgmental. He loves every dimple!’

After gaining 20lb during lockdown, during which she admitted mealtimes became her ‘focus’, Shirley said she’s managed to shift most of the excess weight thanks to sweat-inducing workouts devised by her ‘amazing trainer’ Carla Stubbs. 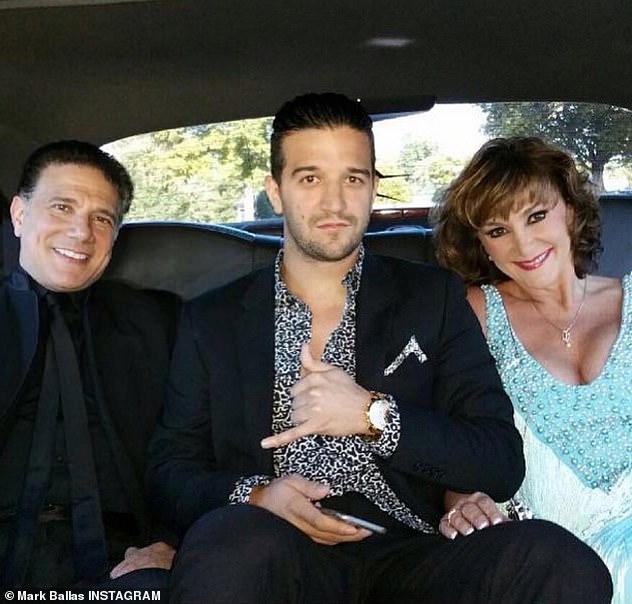 Shirley and Corky tied the knot in 1985 and separated in 2007 after 22 years of marriage and they share a son, Mark Ballas, 34, who is also a professional dancer

‘They were the hardest workouts I’ve ever done — 50 seconds on, 10 seconds off for a full hour,’ Shirley recalled.

‘Weights, sit-ups, band work. It was a different type of workout to anything I’ve done before and it worked!’

Shirley recently revealed she was ‘very excited’ for the return of the hit BBC series and described how ‘it will be the show of all shows’ on Instagram.

This year’s Strictly has been more anticipated than ever as the country is in the grip of the coronavirus crisis, and has seen drastic changes to ensure the series could go ahead, albeit with a shortened run.

Shirley told the magazine she gets excited about ‘everybody who has the balls to put on a pair of dancing shoes and go out to a seven million audience’, and also confessed her amazement that Strictly’s former executive producer Louise Rainbow hired her in the first place. 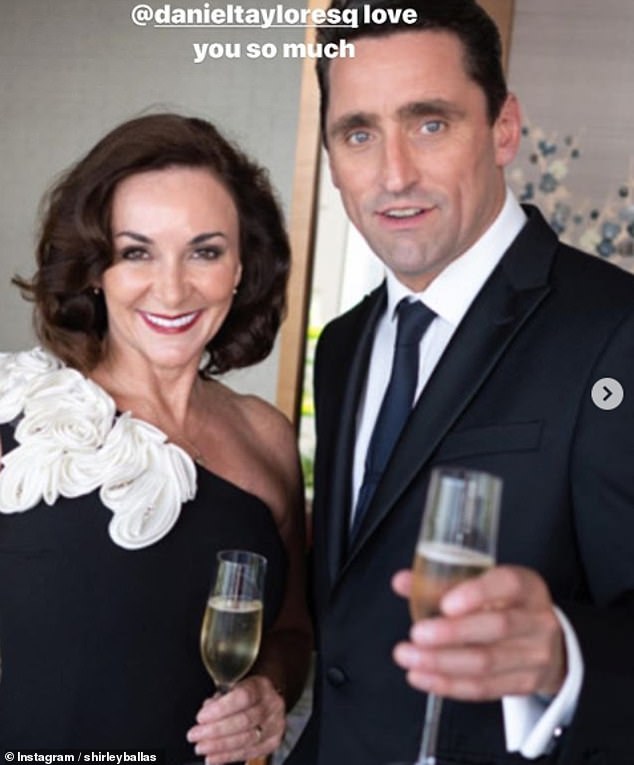 Shirley credits actor Danny Taylor, 48, pictured together, for encouraging her to be ‘truly, truly’ herself

‘Who in their right mind would employ somebody like me with no TV experience?!’ she chuckled.

As luck goes, Shirley was approached independently by Strictly but remained effusive in her praise for Louise whom she said ‘took a gamble’ on her as an ‘older woman’.

‘Louise knew I was qualified but, at the end of the day, you’ve got a huge show and don’t want it to lose ratings. I shall be forever in her debt and I learned a lot from her. She’s a very strong woman,’ she said.