‘I love a croissant’: Shirtless American crashes French newscast to tell viewers how he thinks the country is beautiful has eaten snails and loves an ‘omelette du fromage’

Hilarious footage shows 30-year-old Meka Anyanetu cutting in on the live broadcast to express his love for France, croissants and ‘omelette du fromage’. 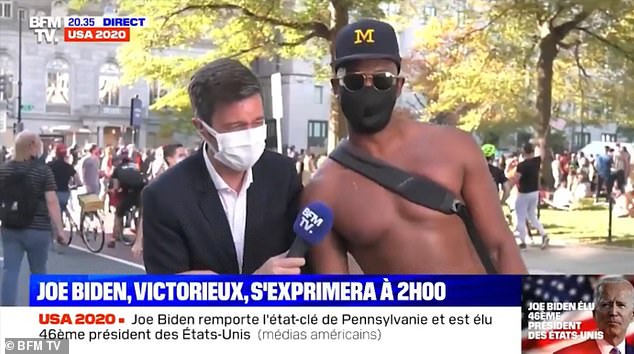 ‘I’ve been to France, it’s beautiful,’ Meka, who was wearing dark sunglasses, a face mask and a cap, said.

‘I ate escargot,’ he continued, attempting a French accent and exaggerated, stereotypical French laughs. ‘I love a croissant.’

‘I love an omelette du fromage,’ he added before going back out of shot, leaving journalist Switek creasing with laughter.

The hilarious 14-second video has already been viewed over 8 million times on Twitter. 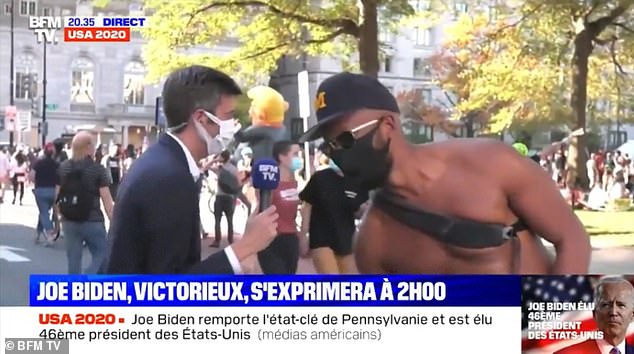 The hilarious 14-second video has been viewed over 8 million times on Twitter. 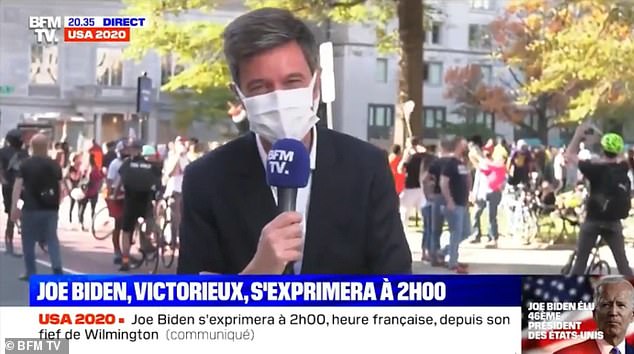 French BFM TV journalist Maxime Switek was reporting on Biden’s election result on Saturday in Washington DC when the shirtless American crashed the newcast. Above, he was laughing after the hilarious exchange

Meka, from Washington DC, was overcome with joy after news organizations began calling the election for Biden.

‘When I heard the result, yeah, I was ecstatic,’ he told Forbes. ‘So I ran down and grabbed my emergency bottles of champagne.’

Meka, after popping the cork and becoming wet and sticky, then tore off his shirt. It was only then he encountered Switek covering the election.

By the end of Saturday, Meka was receiving texts from friends saying they had seen the video.

‘Not only have I been in France, but I’ve travelled by myself,’ he continued. ‘Let your audience know and let the Francophone world know that.

‘I’m not just some oblivious American who watched one TV show. I actually used to know French. I love their transit and as well as their quality of food. Like just things like bread, the meat. I feel like basic items just taste so much better there.”

‘The French are great,’ Meca, who studied French at university, added. ‘I love French food. I love the basic jam there. I love the clothing.

‘I definitely want to come back there and I can’t wait to travel. That was one of my plans this year that was canceled by Covid.’

Meka is still planning on travelling to France once coronavirus restrictions are lifted and is raising the funds. ‘I also need money for a new shirt,’ he added.

By the end of Saturday, Meka was receiving texts from friends saying they had seen the video.