Shirtless David Beckham hits the beach with his boys Brooklyn, Romeo and Cruz in Turks and Caicos

They spent Easter together as a family in Miami.

But on Wednesday, the Beckham boys were spotted enjoying the Caribbean sunshine on the island of Providenciales, known locally as Provo, in Turks and Caicos.

Beach day with the boys! On Wednesday, the Beckham boys were spotted enjoying the Caribbean sunshine on the island of Providenciales, in Turks and Caicos

While mum Victoria and daughter Harper were nowhere to be seen, the Beckham boys were spotted on the white sandy beaches out on their tropical getaway.

David showed off his impressively tattooed body while wearing striped shorts, which he accessorised with a beach hat and classic shades.

As the famous footballer chilled out, eldest child Brooklyn showed off his photography skills by taking a few snaps. 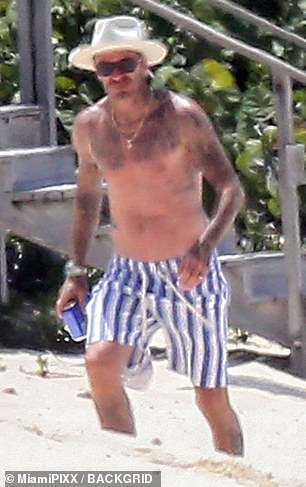 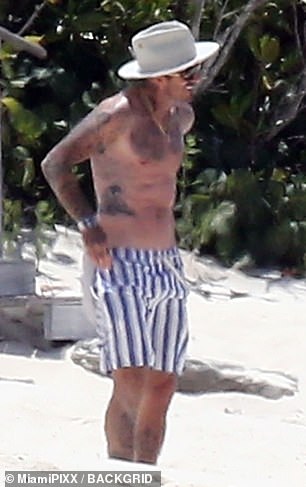 Looking good! David, 45, showed off his impressively tattooed body while wearing striped shorts, which he accessorised with a beach hat and classic shades 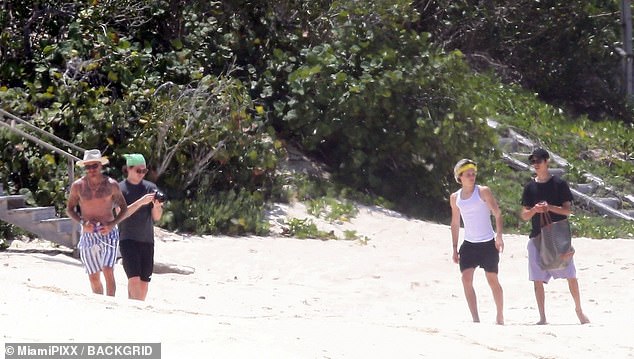 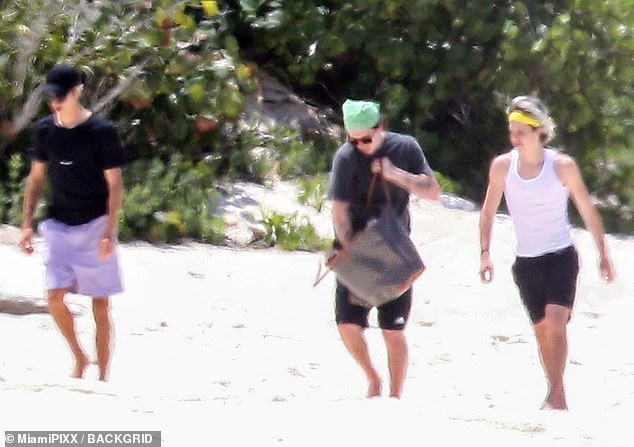 Brothers: The three brothers walked along the white sandy beach together 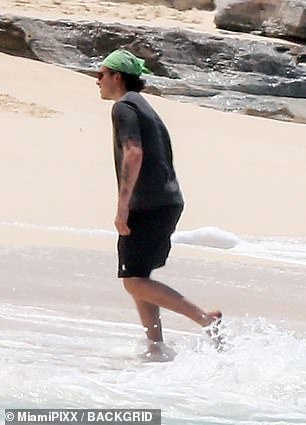 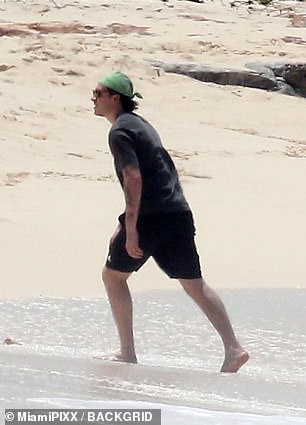 Cooling off: Brooklyn kept things simple in a black T-shirt and coordinating board shorts, but added a pop of colour to his look with a lime green bandana 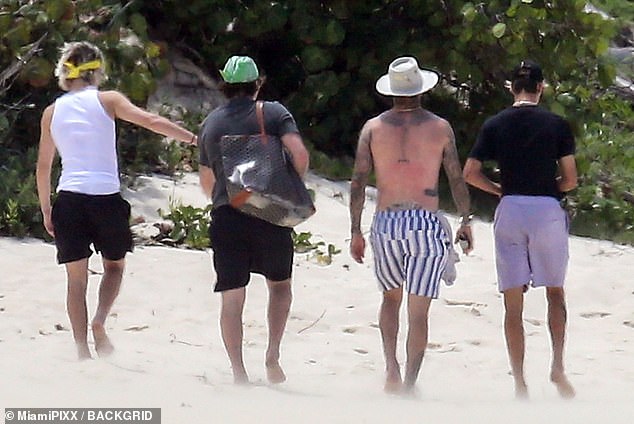 All grown up! Almost all three of David’s now equal him in height

Brooklyn kept things simple in a black T-shirt and coordinating board shorts, but added a pop of colour to his look with a lime green bandana.

Romeo looked stylish in board shorts and a cot-off tee, and also sported a baseball cap for the beach day.

Cruz was keen to get a tan on his arms, and so opted for a plain white tank top, which he wore with dark shorts. 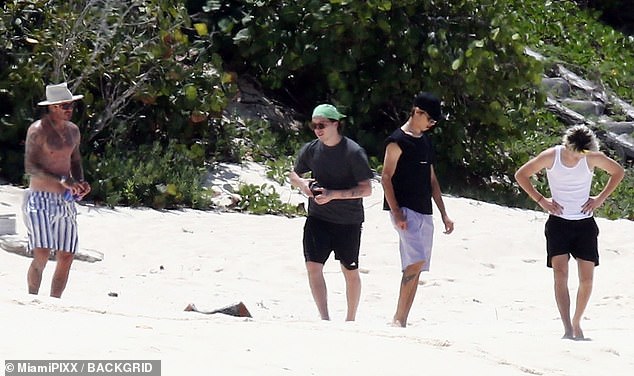 Different generations: While David opted to go topless, his sons all wore tops 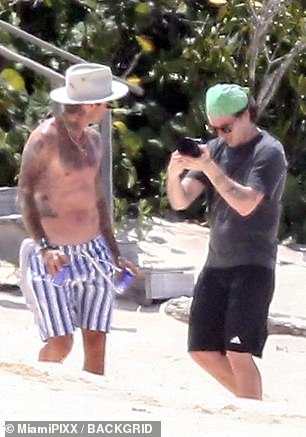 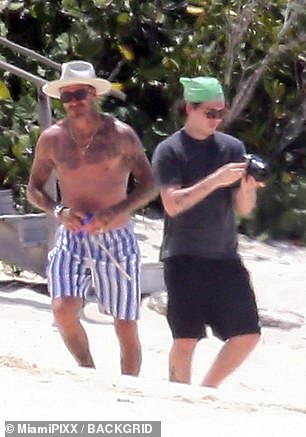 Getting some practice in: As the famous footballer chilled out, eldest child Brooklyn showed off his photography skills by taking a few snaps 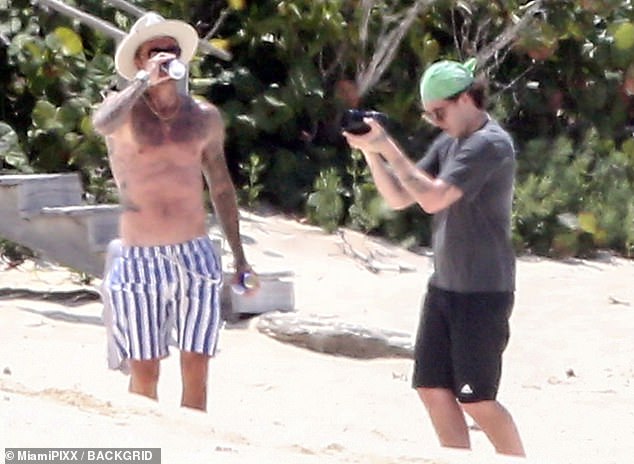 Action shot! Brooklyn snapped away as his dad took a sip from a can 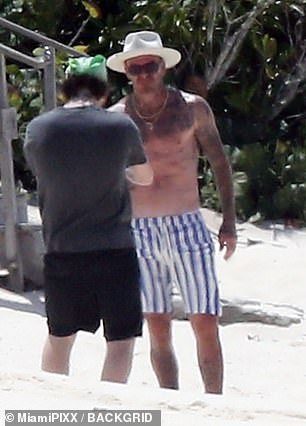 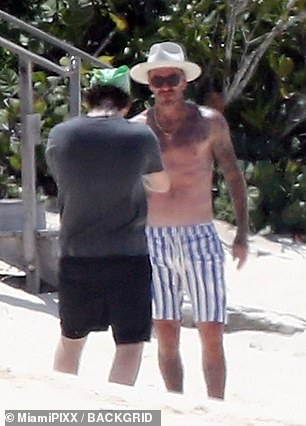 Making the most of it: Brooklyn made the most of having his dad to act as a model for him 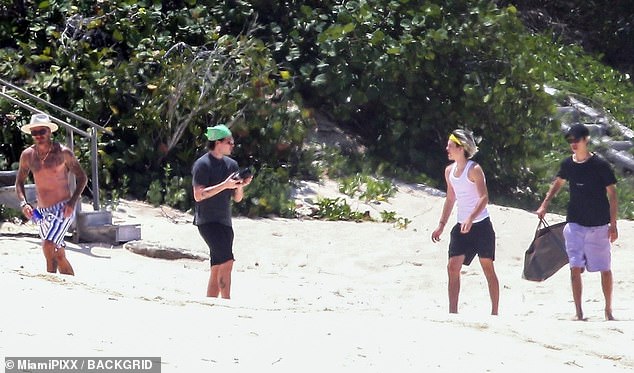 Let’s go! Romeo carried the families belongings as Romeo got his camera ready to capture all of their beach day action

David’s youngest son kept his long locks back off his face with the help of a thick yellow headband.

Cruz took over camera duties while the loved up pair posed for photos whilst enjoying a little PDA out in the hot sunshine.

For some of their time at the beach, the Beckhams were joined on the trip by Brooklyn’s fiancée, American actress Nicola Peltz. 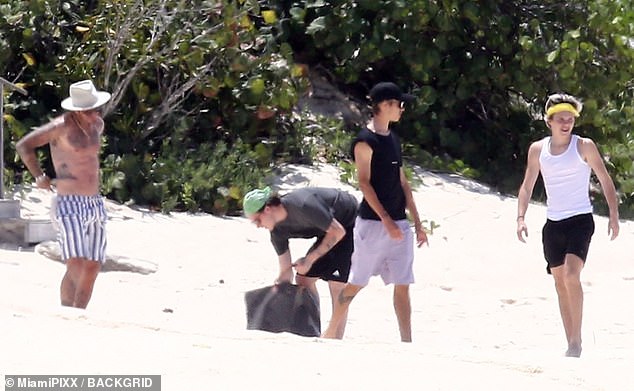 Fun in the sun: Cruz and Romeo looked excited to be at the beach 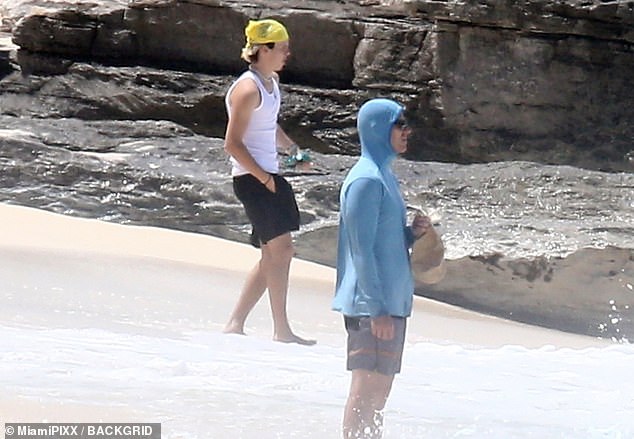 Taking a dip: Cruz waded along the water’s edge as he cooled off in the Caribbean sea 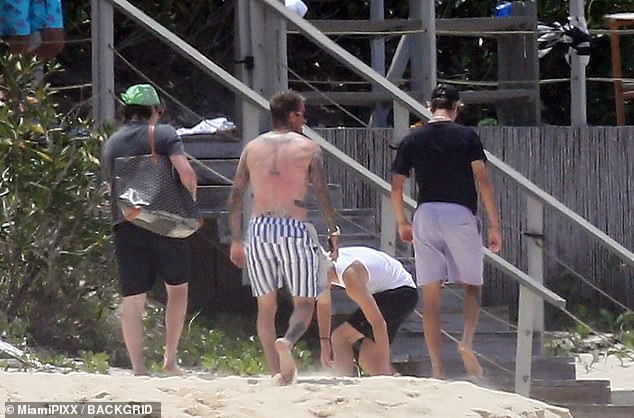 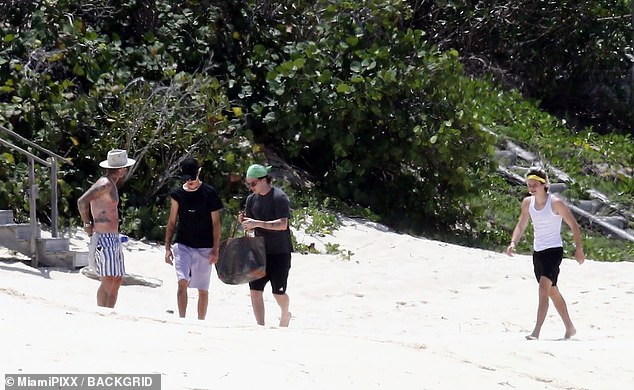 Before their Turks and Caicos trip, the family were in Florida while David prepares for the new MLS season with soccer franchise Inter Miami CF, the club he launched to much fanfare in 2018.

David has been a busy man of late, having reportedly signed a seven-figure deal with Disney+ for a TV series inspired by his incredible football career.

The former England captain will mentor a group of inner-city youngsters from an east London team who grew up in similar circumstances to him. 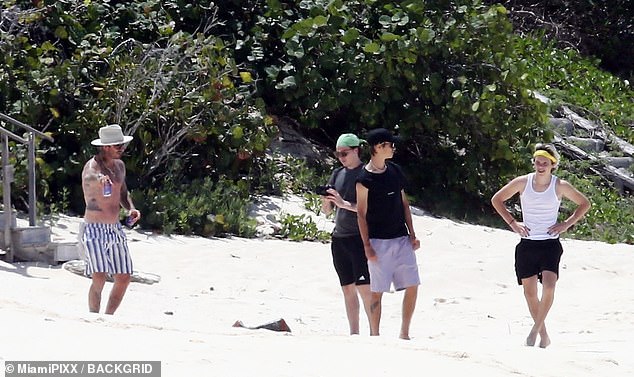 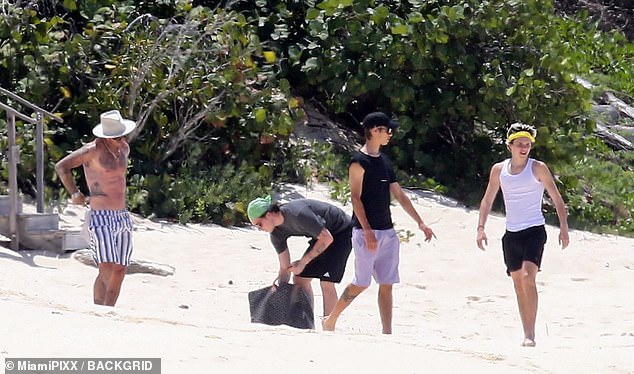 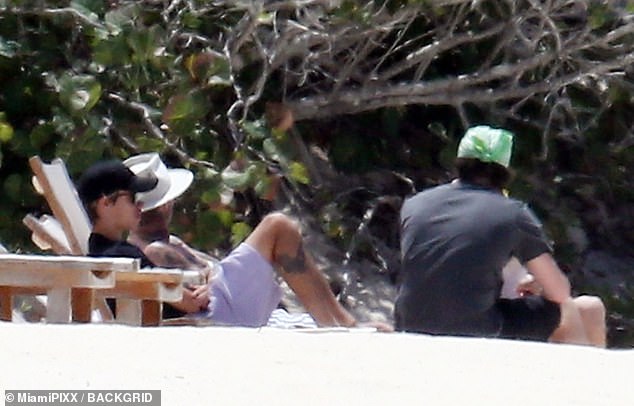 Time out: The group sat back on sunloungers as they relaxed in the sunshine 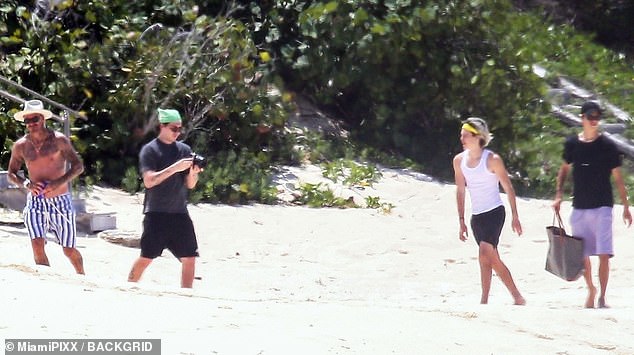 Candid: Brooklyn took candid snaps of his two younger brothers as they walked across the white sands 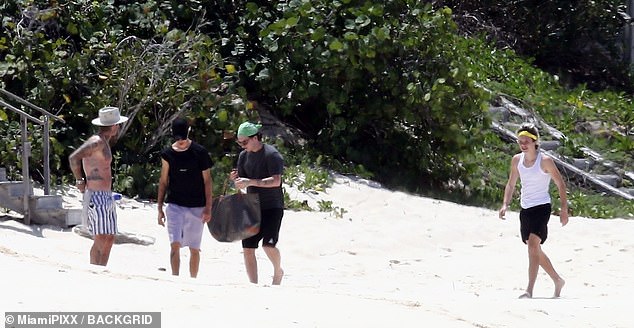 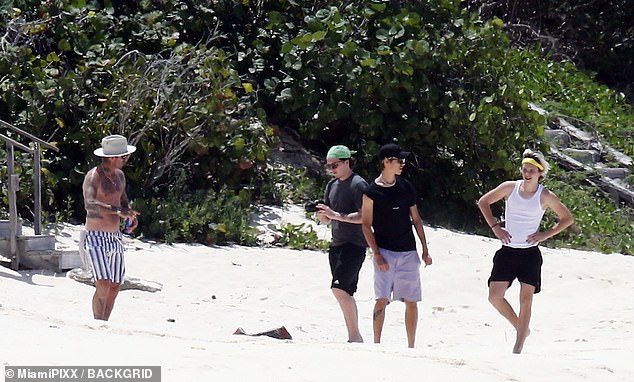 Away from football he has spent lockdown focusing on his work with Haig Club – a single grain, no-age-statement Scotch whisky, which was launched by music mogul Simon Fuller back in 2014.

David said of his new Haig Club Mediterranean Orange: ‘The Med is one of my favourite European destinations and we wanted to bring a fresh flavour to the brand that’s unexpected.

‘This is a very natural step for Haig Club to explore new flavours and something we’ve been working on for a long time.’ 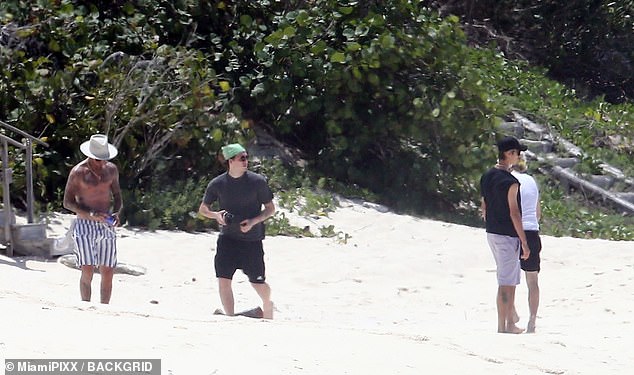 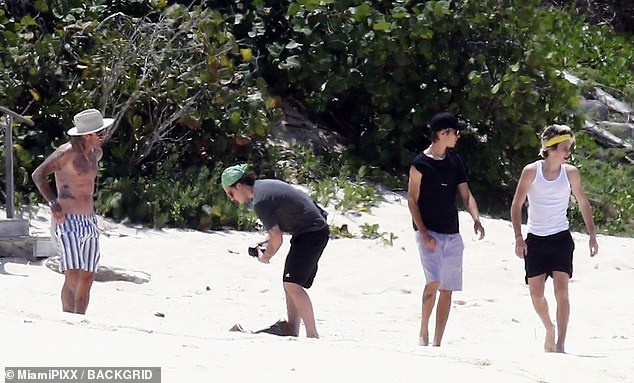 Packing it away: David waited while Brooklyn packed his camera away 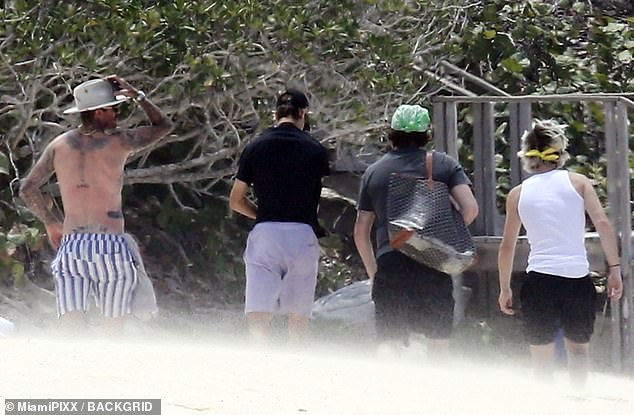 And they’re off! The Beckham boys left the beach side-by-side