A BMW caused devastation when it smashed through a bungalow window and into a bedroom while the oblivious homeowner was asleep in the next room.

Police led away a topless man after the car careered off the road and through a front bay window at around 6.15am.

The house in Roker, Sunderland sustained serious damage, with the window and a large section of the front wall completely destroyed.

Inside, debris and pieces of the smashed vehicle covered the floor of the bedroom, which was also flooded because of a smashed water pipe.

Bad parking: A shirtless man was led away by police this morning after a BMW crashed into the front bedroom of a pensioner’s Sunderland home

Luckily, homeowner Edmund Hammond, 74, had fallen asleep in a chair in the living room and wasn’t in the bedroom when the car smashed in.

According to witnesses, the BMW appears to have crashed into a Renault Clio near the junction of Forster Street and Selbourne Street.

They say it then hit a parked car, badly damaging it and causing it to jolt forward and hit another parked vehicle in front of it, before skidding off the road and crashing into the house.

Officers from Northumbria Police confirmed they arrested a man on suspicion of drink-driving.

Mr Hammond, whose home has been partially destroyed by the collision, revealed how he luckily avoided being injured in the incident.

He said: ‘I fell asleep in the chair watching TV and woke up when I heard a loud noise. 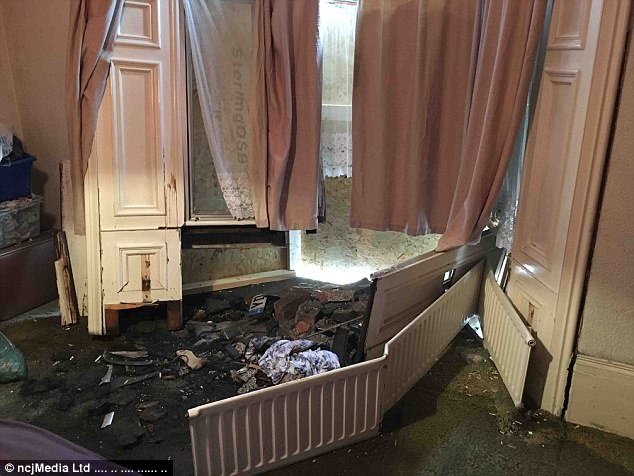 Aftermath: Edmund Hammond, 74, had no idea a car had just smashed into his bungalow 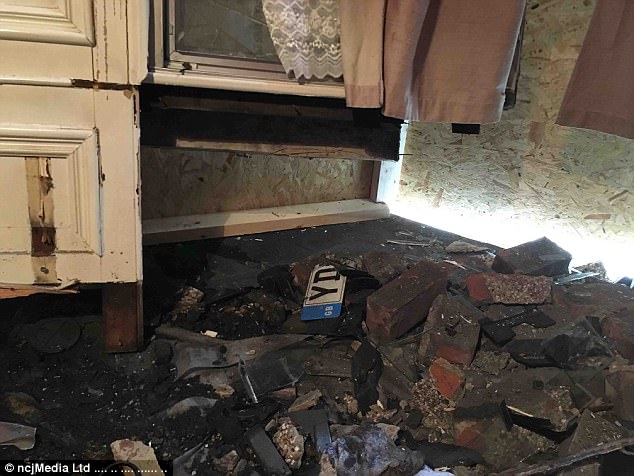 Debris: Bricks and part of a number plate can be seen in Mr Hammond’s front bedroom after the crash this morning 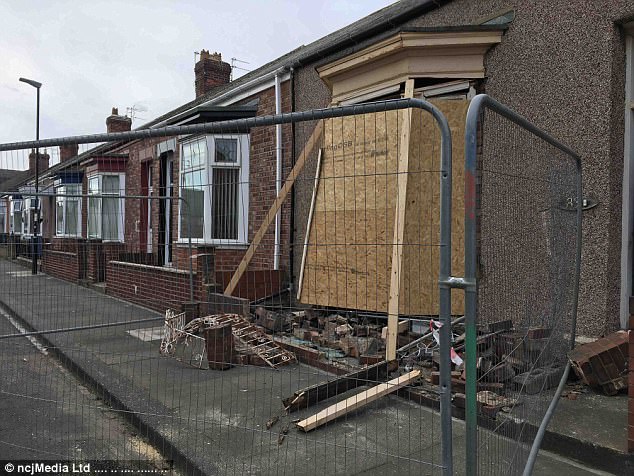 Boarded: The front of the bungalow, in the iconic seaside settlement of Roker, was covered with wood after the crash 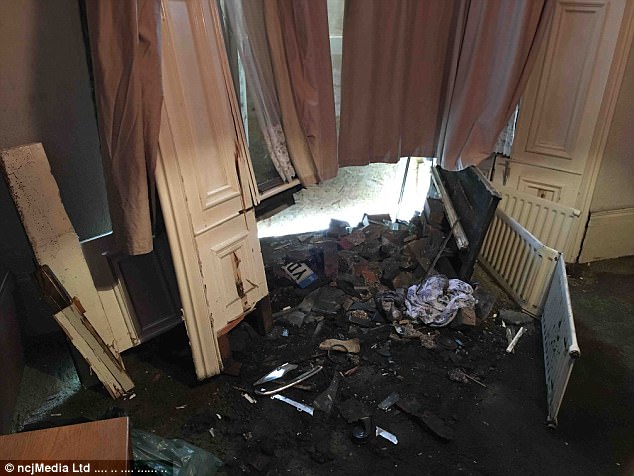 Mr Hammond said: ‘I didn’t know what it was and thought it must just be the neighbours so I got up to brush my teeth and go to bed’

‘I didn’t know what it was and thought it must just be the neighbours so I got up to brush my teeth and go to bed.

‘The next thing I know there’s two people in the hallway who had broken the front door down asking if I’m all right.

‘This BMW had come a good couple of feet into the bedroom through the window.’

Despite his misfortune, Mr Hammond is remaining upbeat.

He said: ‘There’s no doubt that if the bed was in the bay window and someone had been sleeping in it there could have been a serious injury. 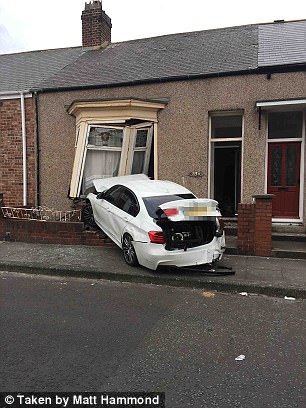 The crash happened at 6.15 in the morning

‘But no-one could stop this happening to them, it’s just luck of the draw.

‘My house just happened to be in the wrong place at the wrong time.

‘We’ve just got to get it cleaned up now because there’s no chance I’m leaving here.’

Two fire engines from Marley Park and Sunderland were at the scene just after 6.15am.

Paramedics were also sent to the crash site after fears people were trapped inside cars.

A spokesperson for the North East Ambulance Service said: ‘We got a call at 6.15am to reports of a two-vehicle road traffic collision one of which had crashed into a house.

‘There were suggestions that people were trapped in the vehicle so we sent a rapid response, an ambulance, a hazardous area response team and also sent our doctor car.

‘There were no injuries.’