Relatives of 90 human smuggling victims found starving and thirsty inside a suburban human home claim they were ordered to pay money to free their loved ones from the ‘deplorable’ conditions.

Flor Anderson, who lives close to the house in Houston, Texas, says the dilapidated property was raided on Friday after one of its occupants relatives called police to report the attempted extortion.

After entering the property, officers were stunned to find the victims – 85 men, and five women – living in rooms lined with mattresses, with many of the people inside starving, thirsty and unable to walk.

Five of the immigrants, most of whom are believed to have come from Central American, since tested positive for COVID-19, and have been put in isolation.

Houston PD Assistant Chief Patricia Cantu told the Houston Chronicle that many of the immigrants complained of not having eaten in days.

The startling discovery was made on Friday on Chessington Drive in Southeast Houston when cops were called to reports of a possible kidnapping.

Scoll down for video

She said: ‘It was a big surprise when we got in the house and saw that.

‘This is very unnecessary and very cruel. It is heartbreaking to see people treated that way. They are human beings, and regardless of citizenship, they deserve to … be treated respectfully.’

Some of the group, which consisted of 85 men and 5 women, were said to be unable to stand and in urgent need of medical attention. 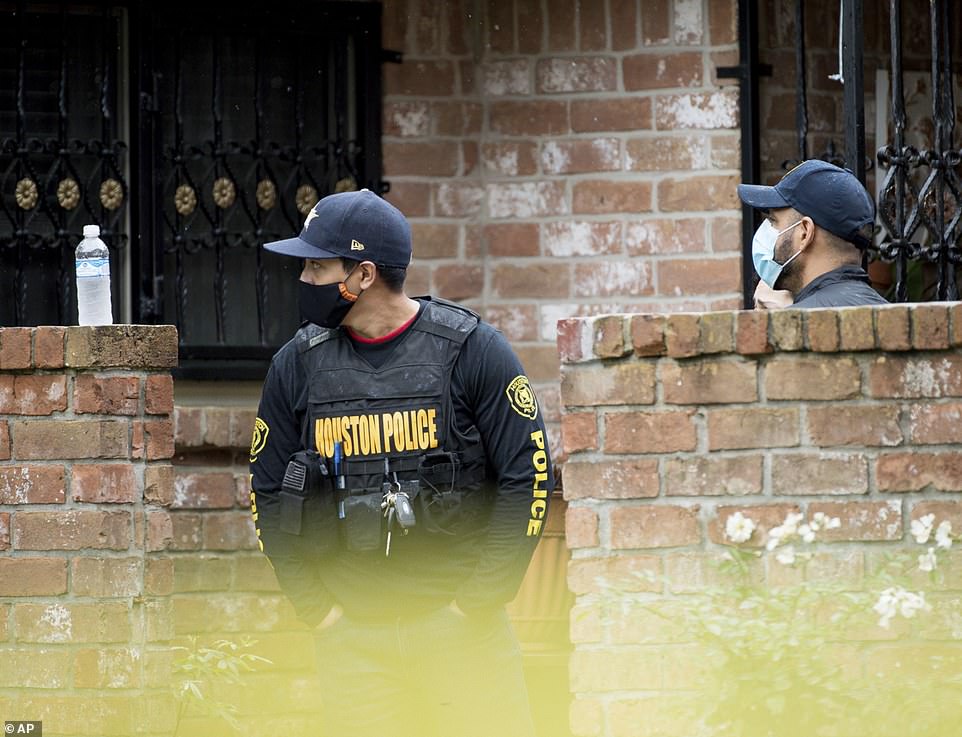 Law enforcement officials in Houston are investigating a human smuggling case, where more than 90 undocumented immigrants were found inside a home on the 12200 block of Chessington Drive on Friday 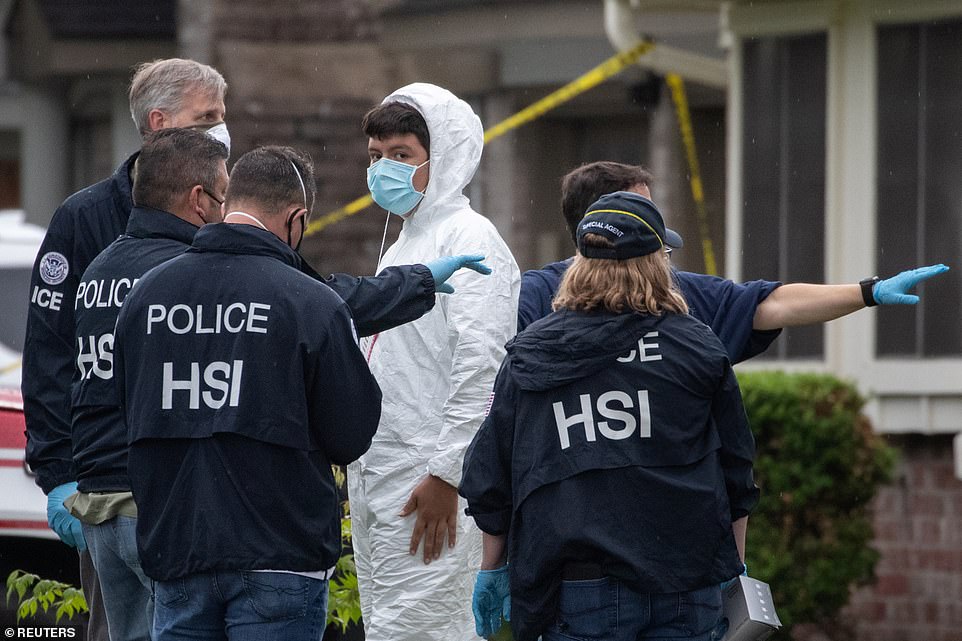 Homeland Security Investigations (HSI) personnel surround a man as he exits from a residence in southwest Houston, Texas 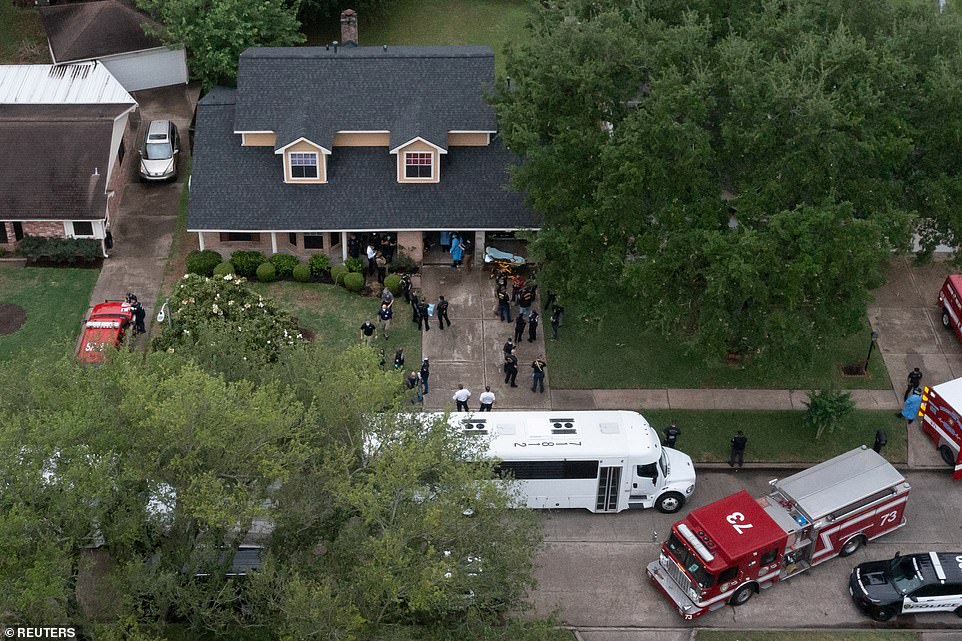 Dozens of people were found inside a residence in Southwest Houston, which was initially reported as a kidnapping but prompted police to look into human smuggling according to police and local news organizations 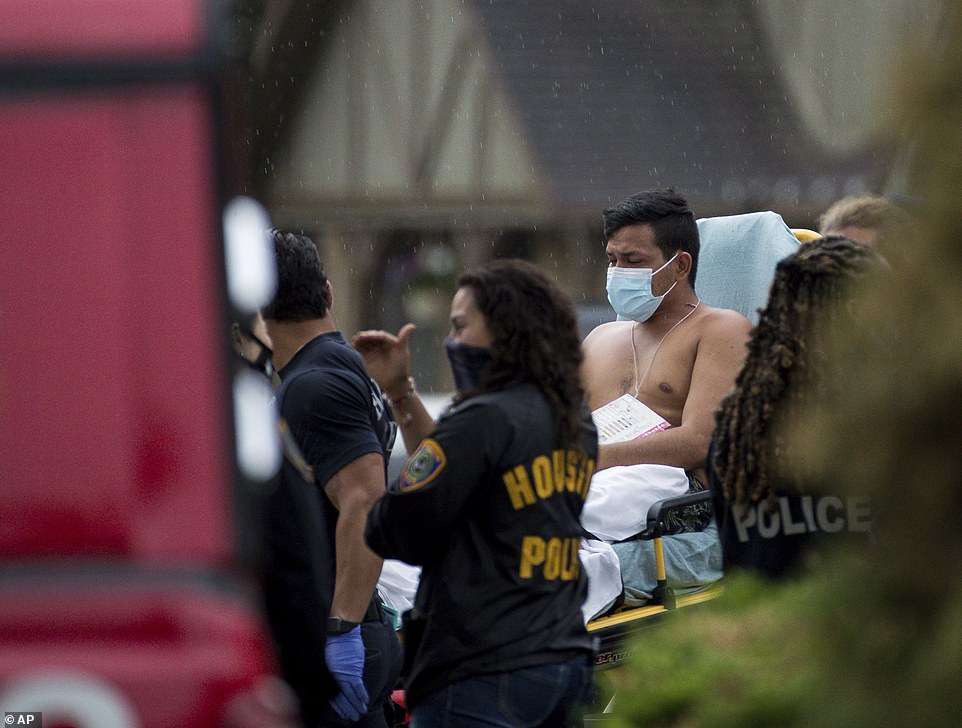 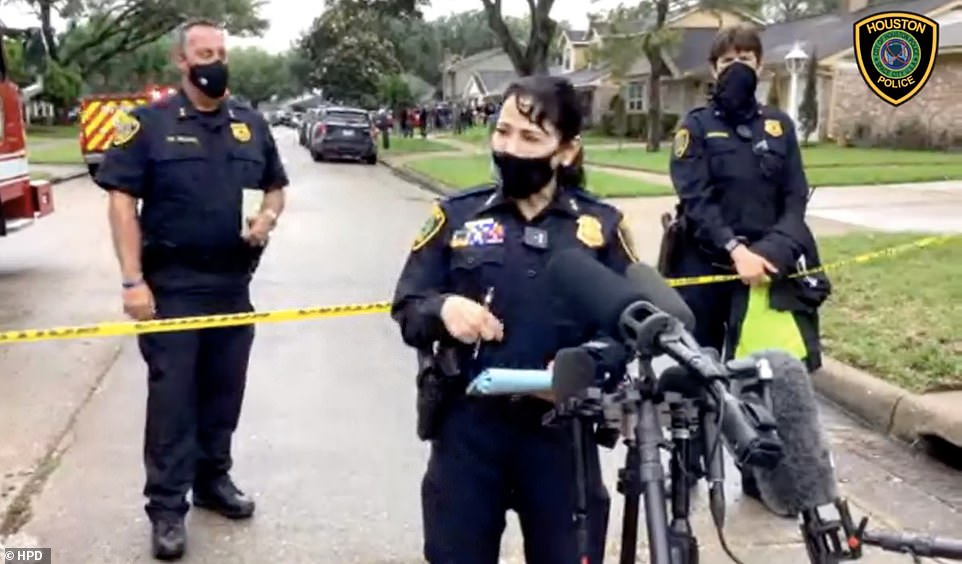 The youngest of those apprehended were in their early 20s with some of the immigrants telling police they had come from Central America.

No minors were found, with the youngest person there being in their 20s and the oldest in their late 30s.

The occupants of the house told officers that they had not eaten in some time.

Edwards said detectives worked through the night to get information on a location for the possible kidnapping victim. 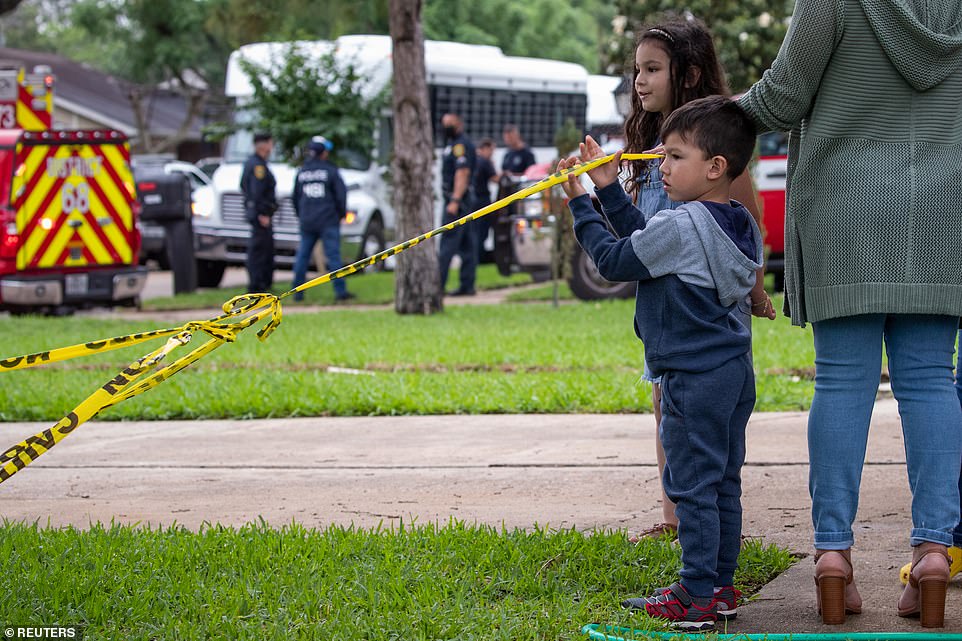 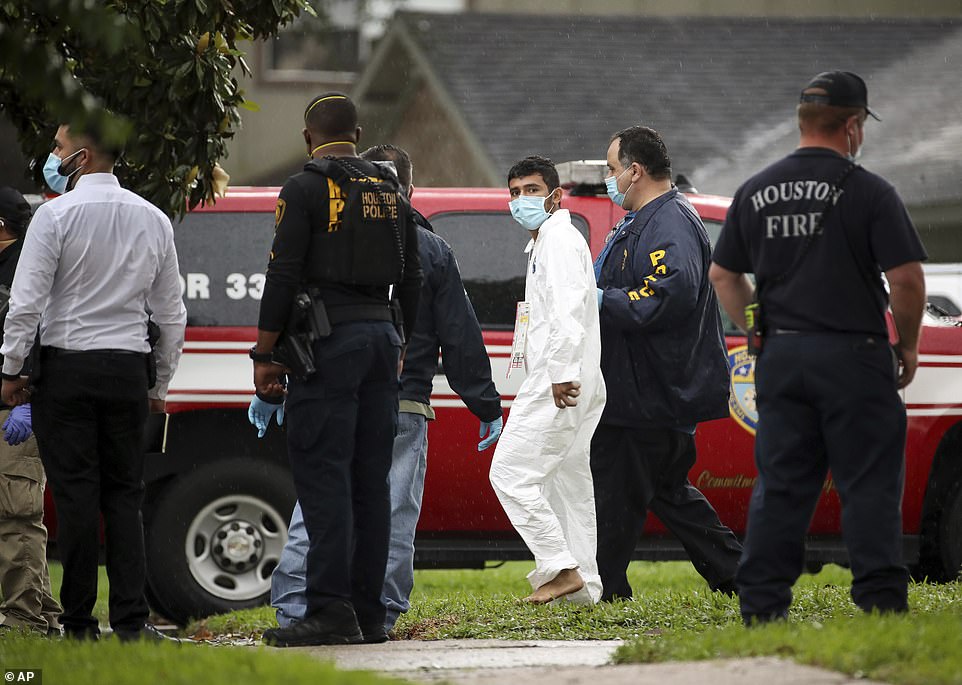 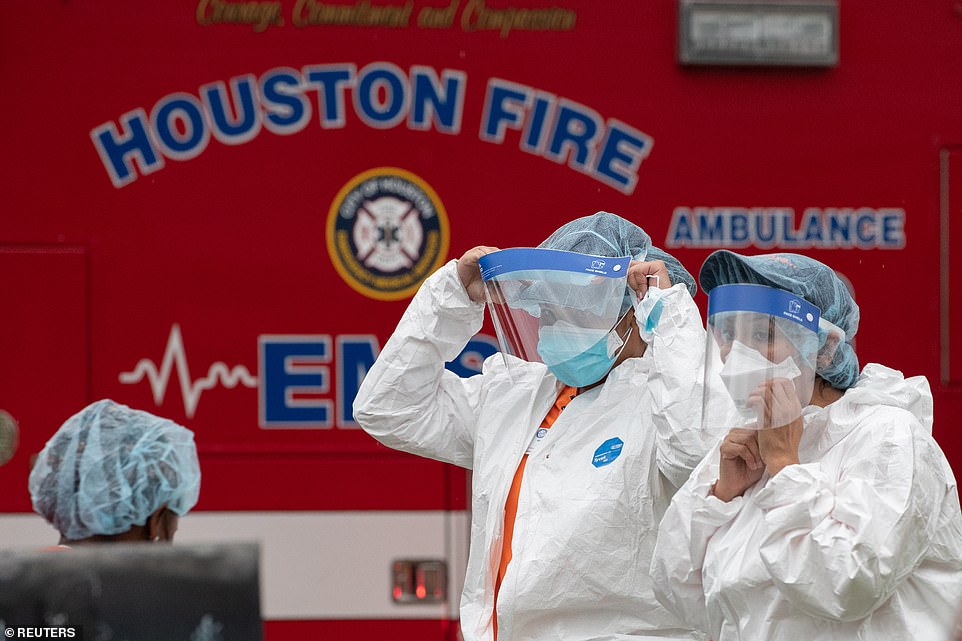 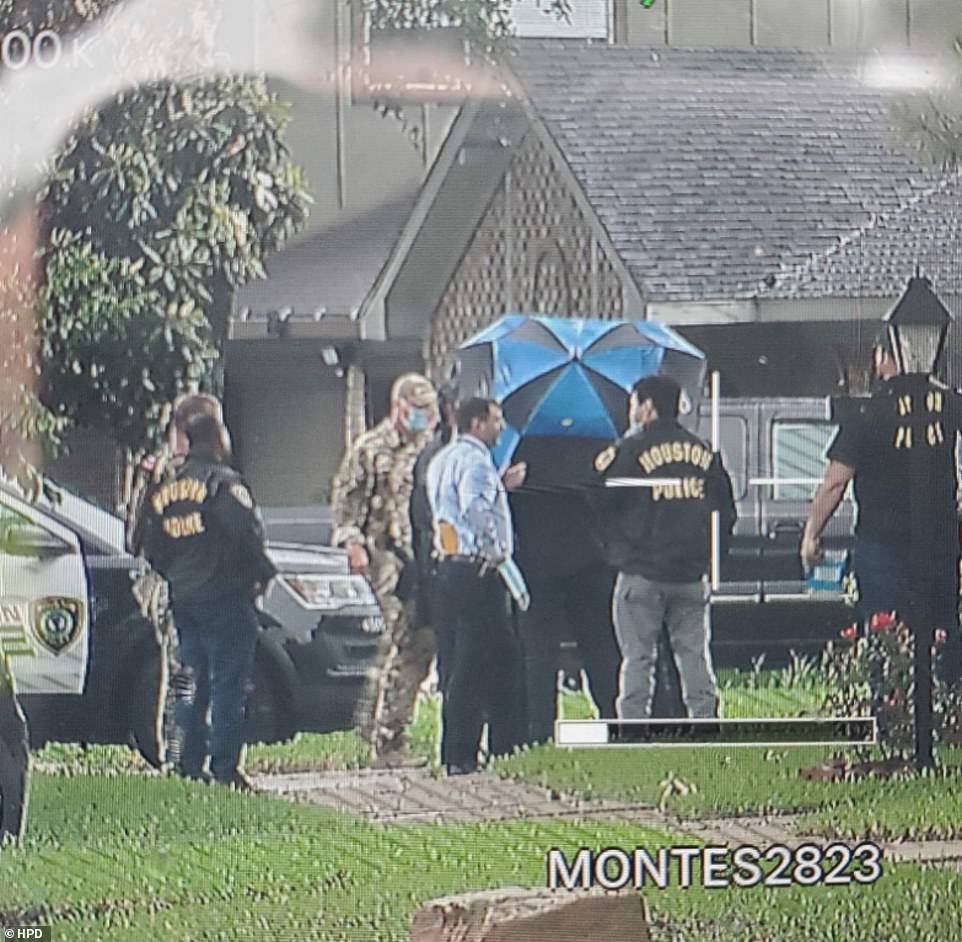 Police are seen working on the scene of the suspected human smuggling case Friday. Officials say of the 91 people – all adults in their 20s and 30s – five were women and the rest men 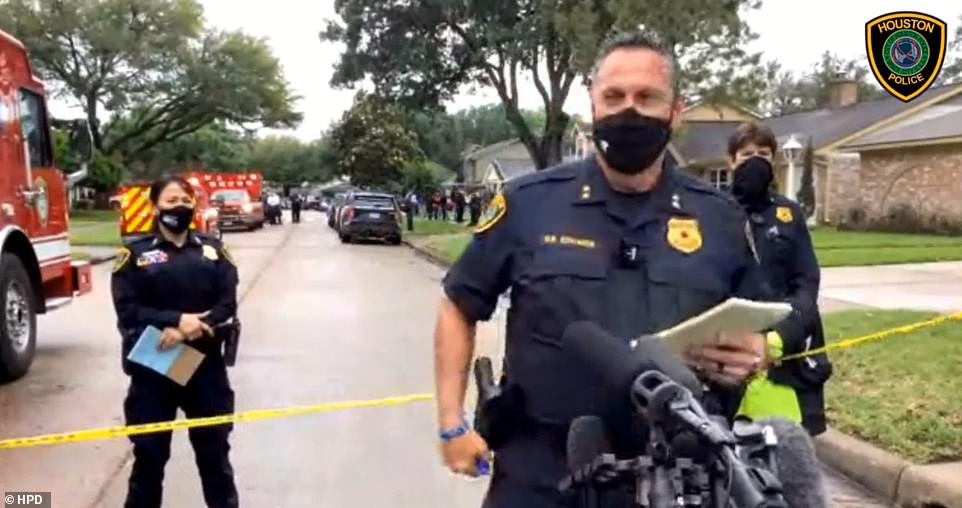 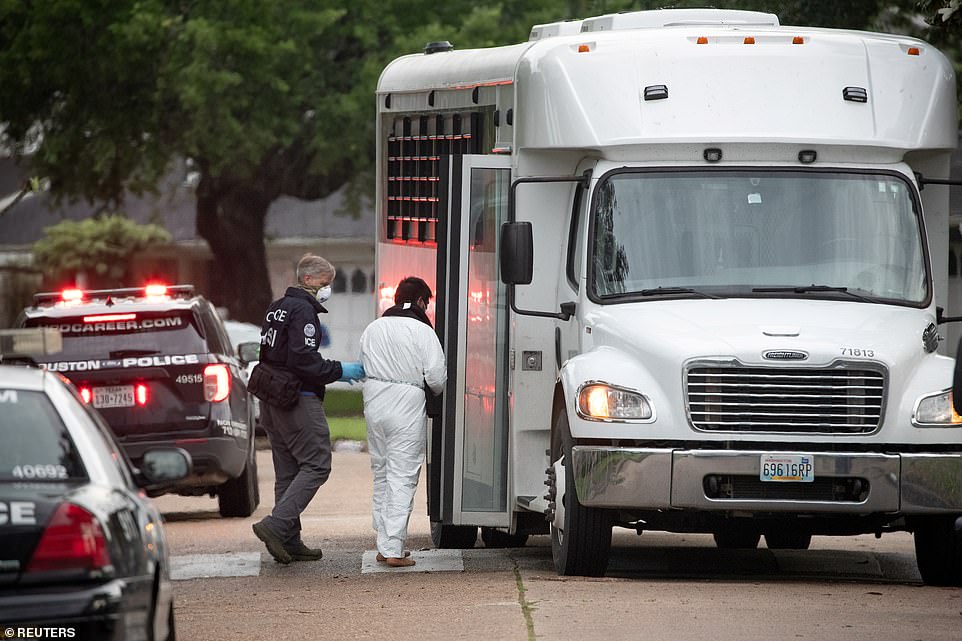 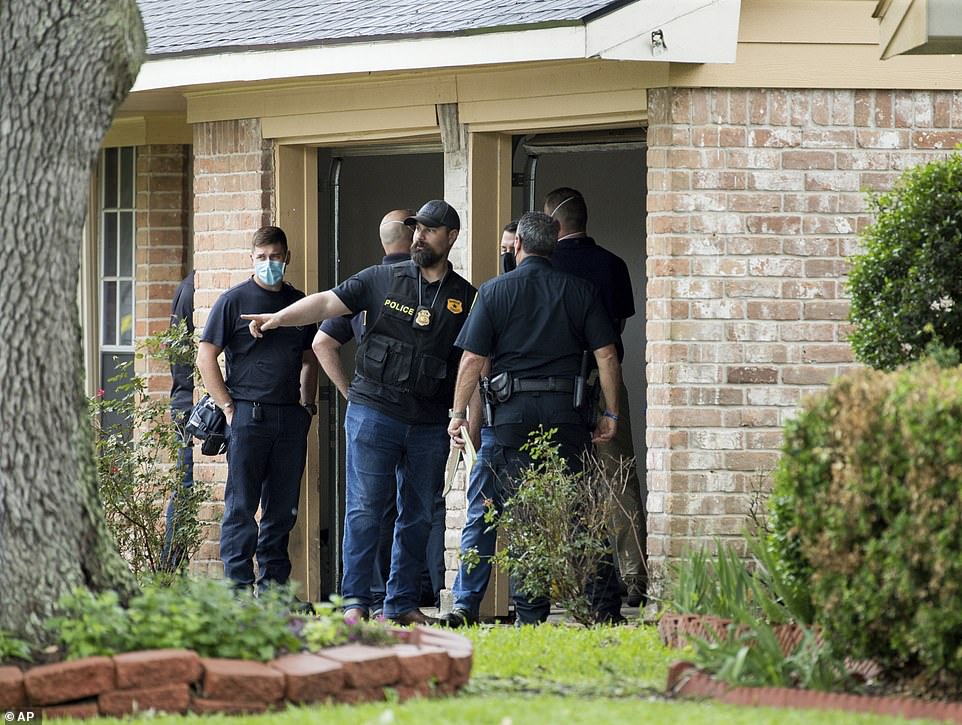 Law enforcement officials investigate the site of a human smuggling case, where at least 85 men and 5 women were found 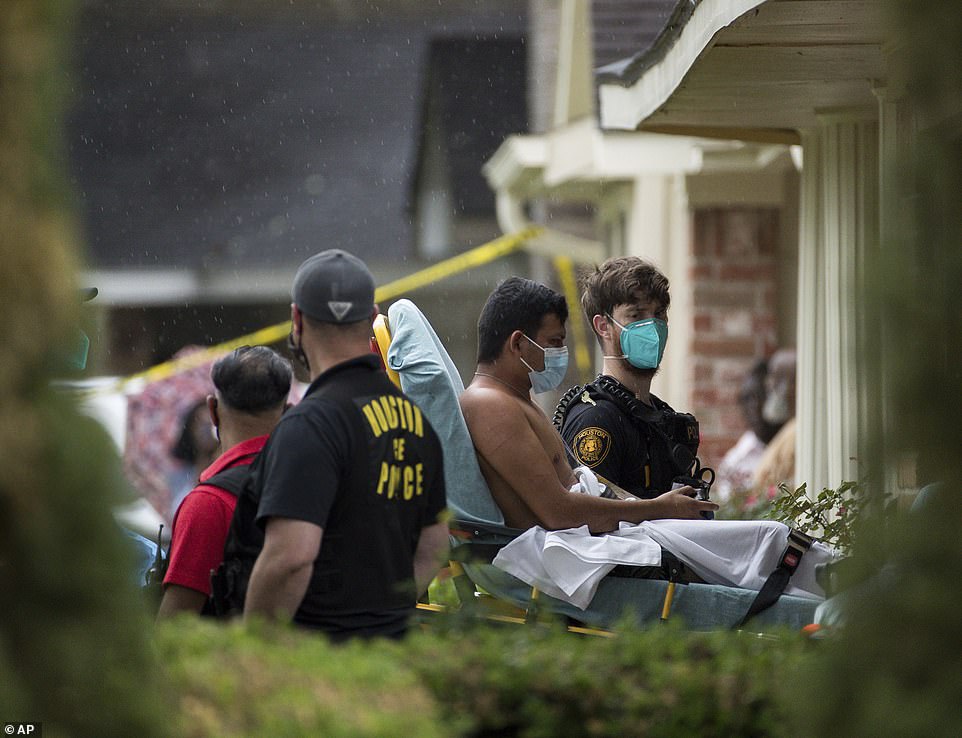 Edwards revealed that the 911 call likely came from a relative of one of the suspected smuggling victims.

When asked about the conditions inside the residence, Edwards said: ‘It wasn’t bad, like you would think. It didn’t look like … they were going to the bathroom on the floor.’

He said there were no beds in the home, but he did see mattresses.

‘It was a big surprise when we got in the house and saw what we saw,’ Edwards added.

Many residents of the home who had not tested positive remained there on Friday, and were given food, water as well as medical care.  Some were filmed in handcuffs being loaded onto a bus.

So far, no arrests have been made in connection with the suspected smuggling case but federal agents with Homeland Security Investigations are working to determine who is responsible for the smuggling operation. 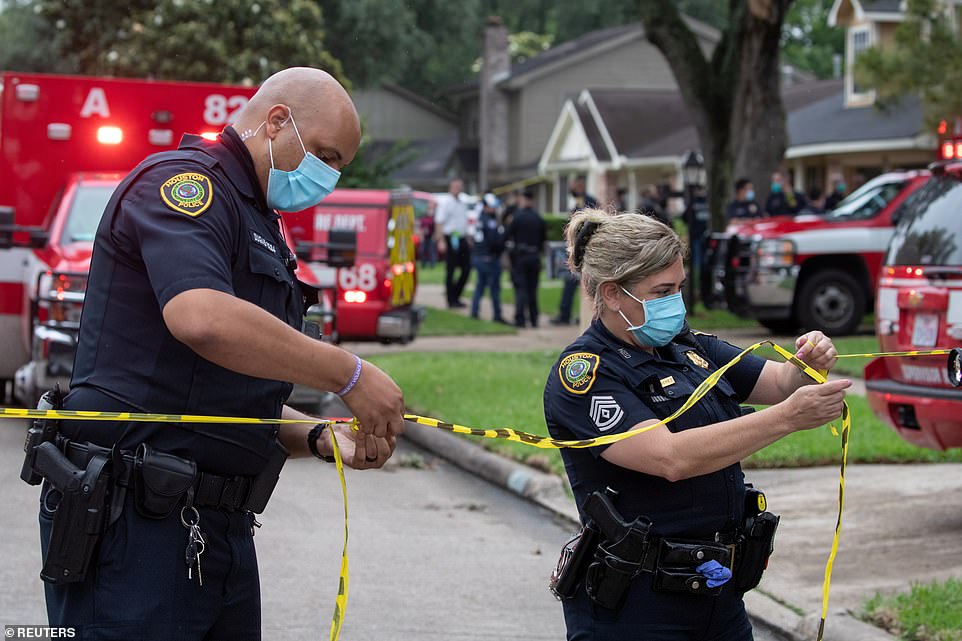 Police officials cordon off the street. Cops say several of the 91 people found inside the residence likely have COVID-19. According to police, some have fever and loss of smell. 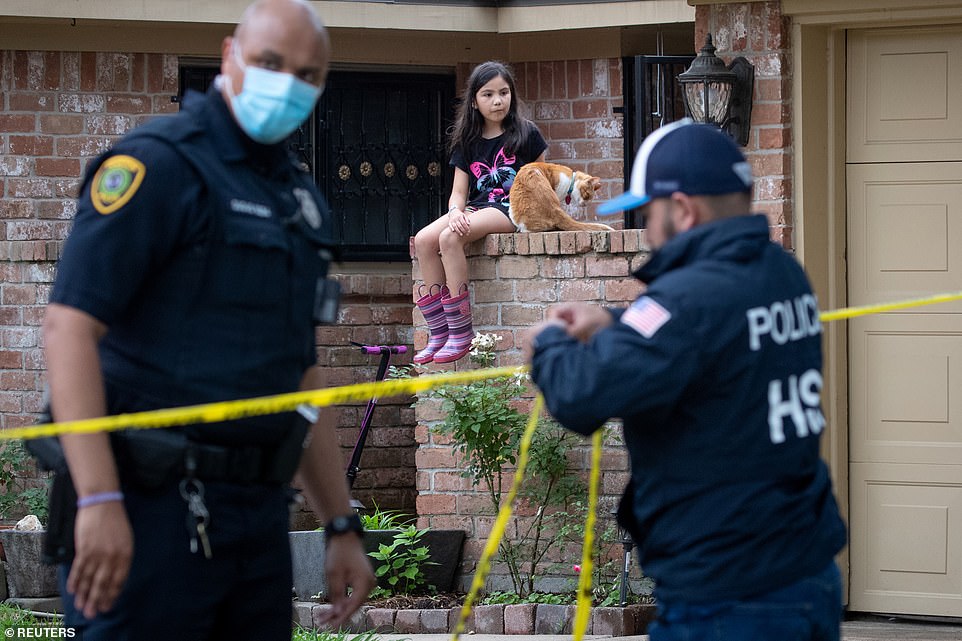 A young resident sits with a cat outside a home as police officials cordon off a street in southwest Houston, Texas, U.S., April 30, 2021. Dozens of persons were found inside a residence in Southwest Houston 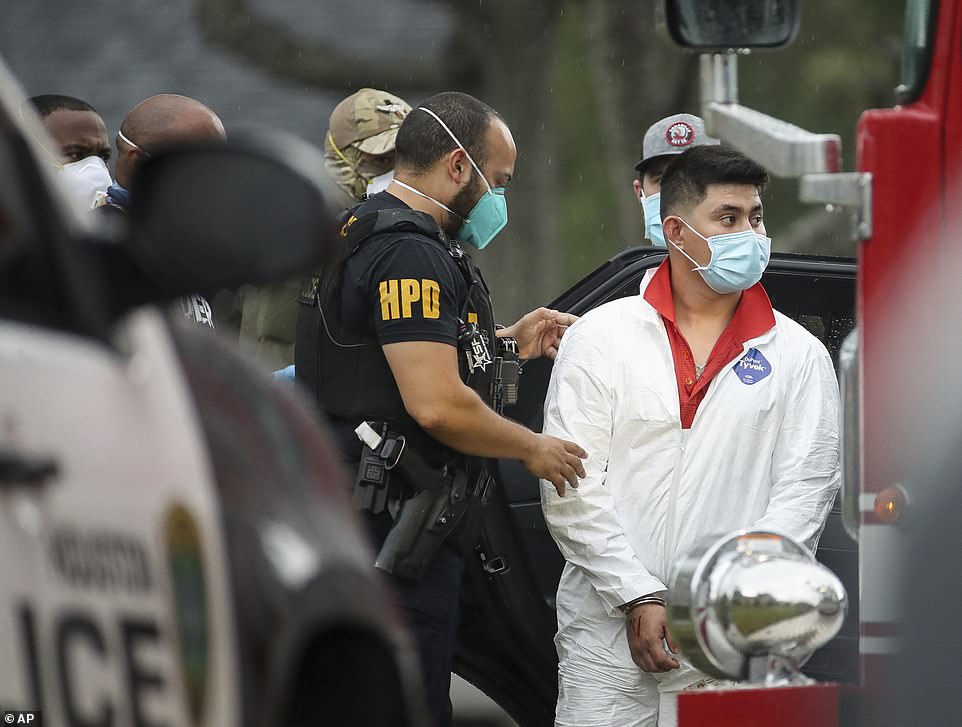 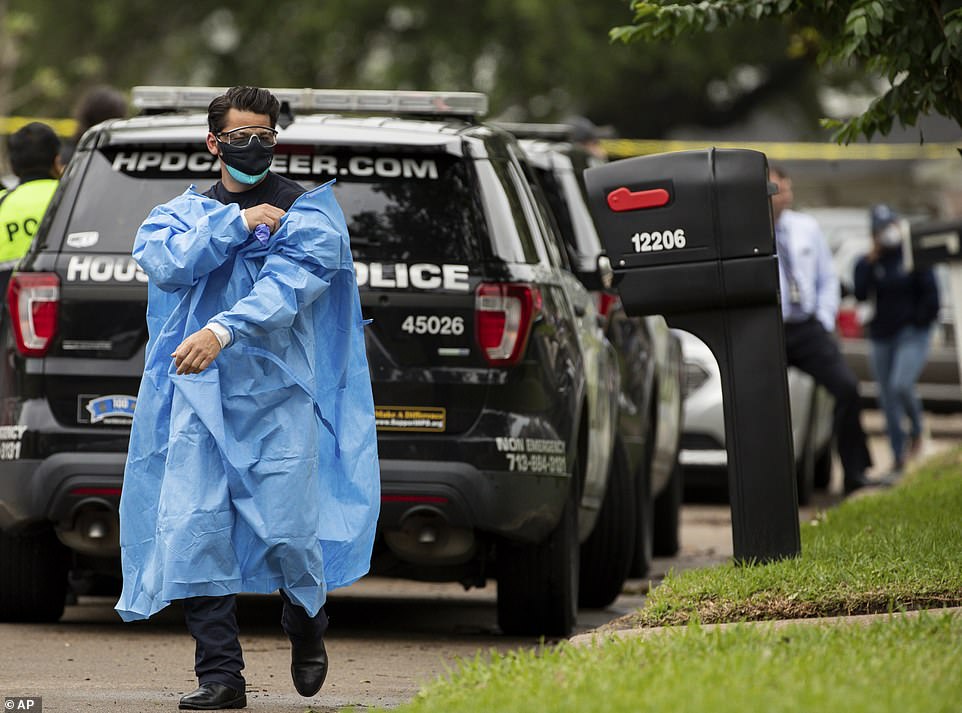 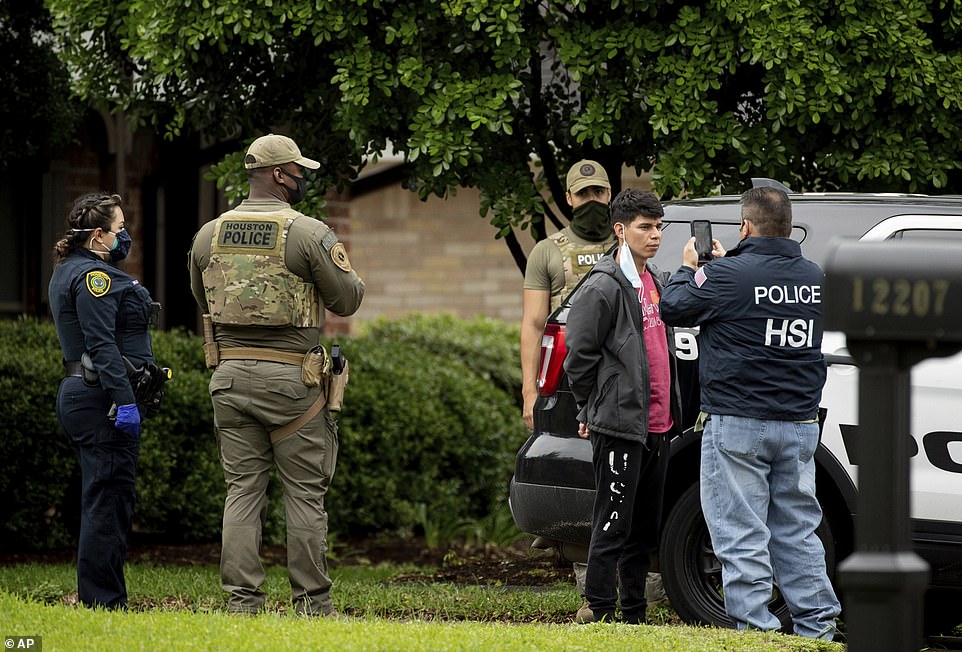 A Homeland Security Investigations officer take a photograph of a man at the scene of a human smuggling case, where more than 90 undocumented migrants were found inside a home 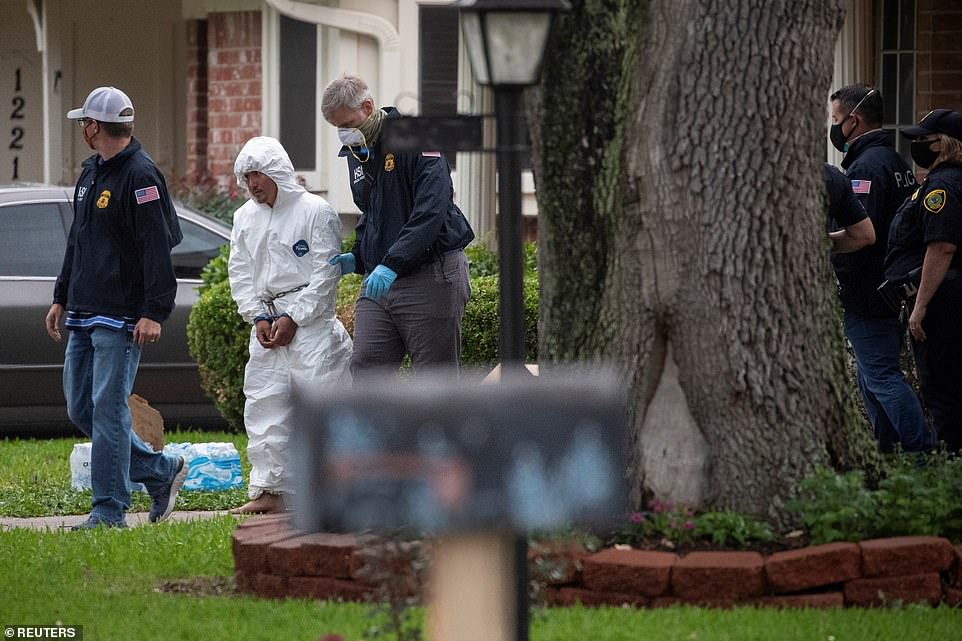 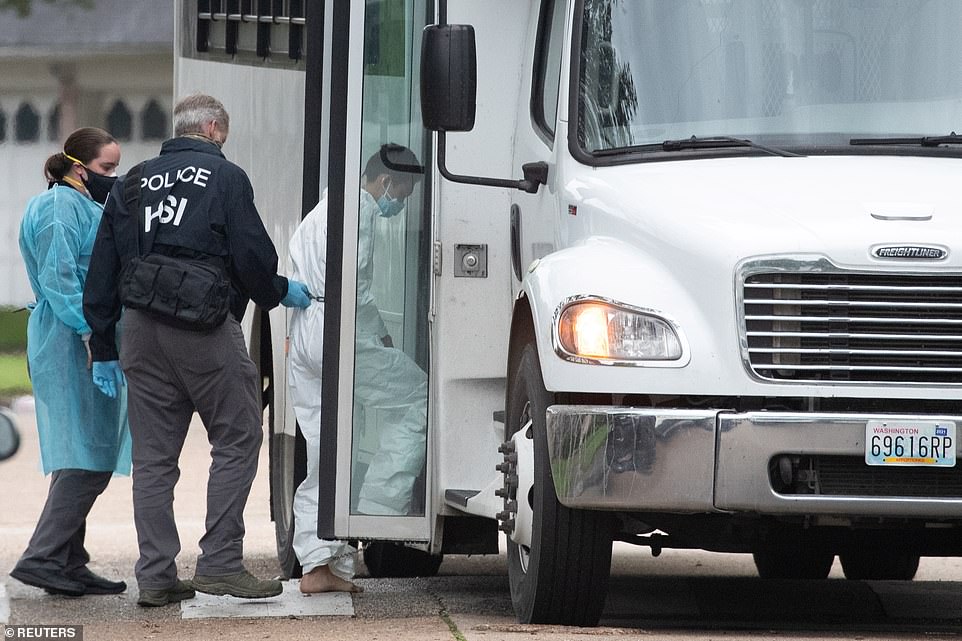 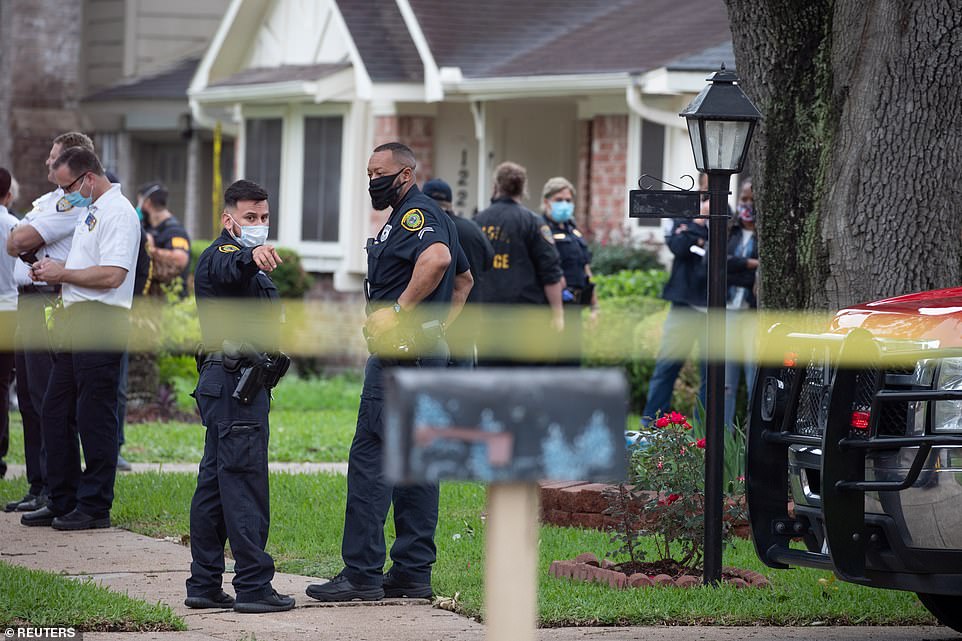 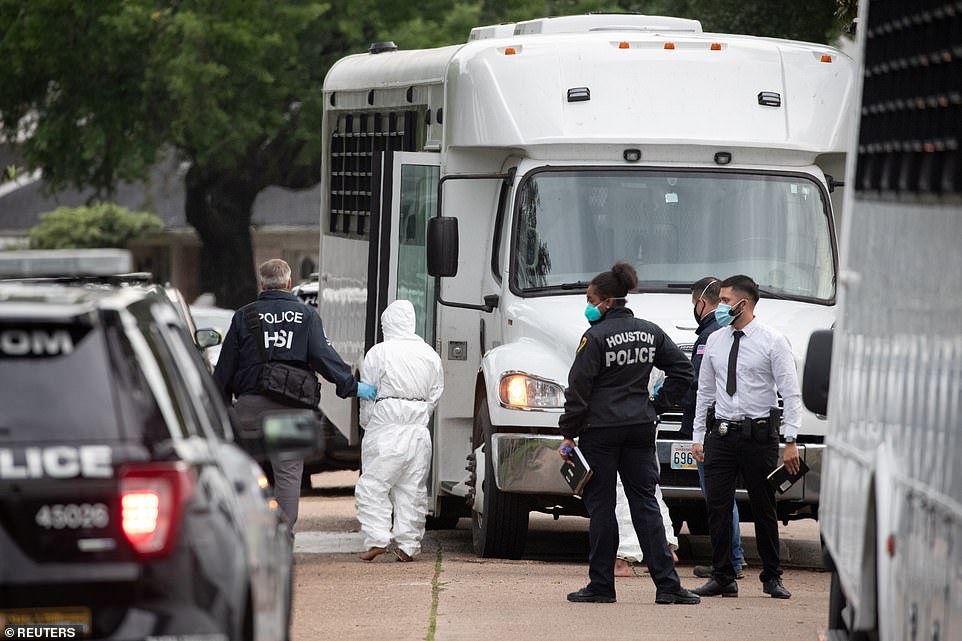 Neighbors in the area spoke of their dismay to the Houston Chronicle that they hadn’t noticed something sooner.

‘It’s really strange that so many people can be inside a house, and we didn’t notice. We really need to be more vigilant,’ said Kai Lynch who lives nearby.

‘This is a middle-class neighborhood with a lot of retired people. You wouldn’t think that something like this could happen here, but who knows, maybe that’s why whoever was doing this chose this because nobody would suspect it,’ said fellow neighbor Chandra Price.

The finding of so many immigrants crammed into the Texas home will only add to questions over President Biden’s handling of the current border crisis.

A massive influx of migrants, including record numbers of teenagers and children without their parents have been coming across the border. 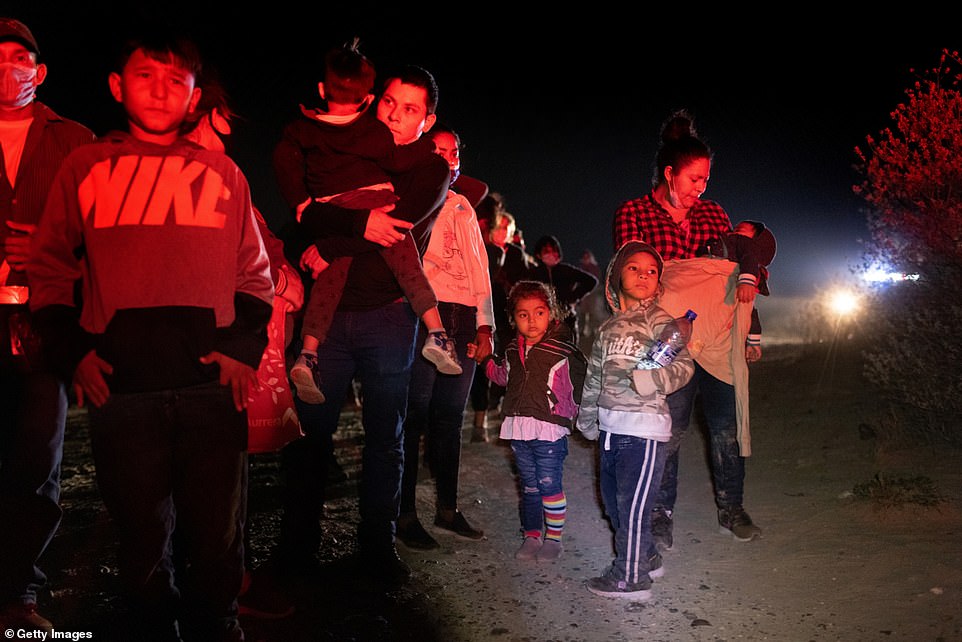 President Biden continued to blame the Trump administration for the situation at the border; above immigrant families wait to be processed by U.S. Border Patrol agents after crossing the Rio Grande into South Texas

In March, 172,331 migrants were taken into custody by U.S. Customs and Border Protection. The numbers are the highest recorded in 20 years.

A White House official told CNN that the number of migrant children being held in jail-like conditions by US Customs and Border Protection dropped nearly 84% in the span of a month. As of Wednesday, there were 954 children in CBP facilities, down from a peak of 5,767 on March 28.

Additionally, Biden said because the Trump administration waited so long to cooperate with the presidential transition – due to Trump contesting the election results – his transition team was unable to get information it needed from the relevant government agencies.

‘We didn’t find out they had fire a whole lot of people that they were understaffed considerably,’ Biden said.

He also said the Trump administration failed to plan for the seasonal upsurge that comes every spring.

‘They didn’t have beds that were available. They didn’t plan for the overflow,’ he said, arguing conditions for the kids, who have been put into overcrowded shelters with some sleeping on the floor, are better now.

According to Customs and Border Patrol data, the number of immigrants apprehended along the southern border jumped from 96,974 in February to 168,195 in March.

The last time single-month apprehensions were that high was in March of 2001. Additionally in March, CBP  apprehended 18,656 unaccompanied minors at the southern border, a record since at least October 2009 and double February’s numbers.

Republicans see the issue as one they can use to make in roads with voters in the 2022 midterms and have criticized Biden heavily on it, particularly for refusing to call the situation a ‘crisis.’ Biden used that word earlier this month when talking about the border but the White House quickly walked it back.