Part Bedlington terrier, part Heinz, Cinders (pictured) loved to run. She would pin back her ears and chase the breeze

When I heard Conservative politicians talk of ‘freedom’ this week at an event to promote individual liberty, I thought of our late dog Cinders.

Part Bedlington terrier, part Heinz, Cinders loved to run. She would pin back her ears and chase the breeze. To see that darling dog sprint from side to side of our Herefordshire field, a flat, grey, galloping streak of speed, was to see freedom.

One winter morning 12 years ago, Cinders was hit by a car on the road outside our house. The motorist, brutishly, did not stop.

Although her two back legs were wrecked, Cinders somehow managed to crawl to our front door in a pitiable state and we rushed her to the vet. After more than £1,000 worth of treatment, she survived.

But she never ran again, poor love, and I have never been sure we did the right thing in keeping her alive for another couple of years. Without running, life had lost its zest for her and eventually we had to have her put to sleep.

When we gave a home to a new dog (Flip, an adult Patterdale terrier), we were worried when she kept exploring the road. How could we keep her safe? A friend suggested a freedom collar. This device has a watch-style battery which gives the dog a warning vibration when it crosses a wire buried round the perimeter of your garden.

The vibration, comparable to an electric charge (think static carpet), is preceded by a beeping noise. After a couple of ‘shocks’ the dog learns to stop advancing as soon as it hears that beeping. Although they are called ‘shock collars’ they should really be called ‘beeping collars’, for that is what works as the deterrent.

It’s a clever system and works brilliantly. I only wish we had known about it before Cinders had her accident. Flip, and more recently her daughter Bonnie, have worn their collars for years.

Like most terriers they are frisky souls — a polite way of saying they are exuberantly disobedient, particularly if they spot a rabbit — but thanks to that collar both dogs have kept away from the road.

The collar has also stopped them terrorising the public right of way that cuts through our garden. It has stopped them yapping round the ankles of ramblers and the hooves of horses.

Meanwhile, Flip and Bonnie are free to roam our field. They may not run as elegantly as Cinders but they love the freedom. And if you think they are scared of their collars, please explain why they happily sit at my feet while I fix them in place.

All that is now imperilled thanks to our interfering political class. Officials at the Environment Department propose to ban freedom collars, having been got at by professional animal-rights lobbyists who claim the collars are cruel.

Thousands of dog and cat owners in England thus face a dilemma (it’s estimated there are around half a million electric dog collars in use in Britain).

If a ban comes into force, should they disobey the law? Or should they remove their pets’ collars and put them at risk of being run over?

Supporters of the proposed ban want to outlaw both the sort of electric containment fences that we use for Flip and Bonnie, and handheld devices which allow dog trainers to give their animals shocks at the press of a button.

I have never used such a machine, but some dog owners say they can be useful in controlling their pets in the street or in fields with livestock. Maybe they can but my concern, as I have described, is for the beeping collars which keep a dog inside its familiar territory. Both systems may soon be outlawed.

The way some animal-rights fanatics talk, anyone who uses such a containment fence for their cat or dog is worse than Hannibal Lecter. When I debated the matter on BBC1’s Daily Politics this week with Scots Nationalist MP Deidre Brock, she claimed that the collars administered electric shocks of 6,000 volts. From one tiny little battery? The word for that claim is ‘barking’. 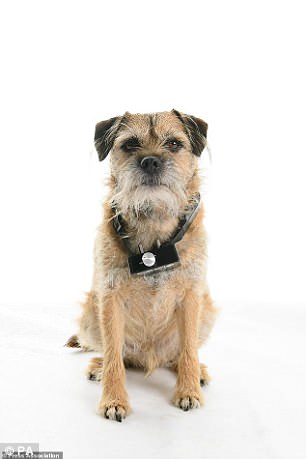 Pictured: One of the shock collars modelled on a dog

On social media, those of us who support freedom collars are denounced as fascists and animal torturers and worse. ‘Wear one yourself and see how you like it!’ scream anonymous online commentators. My answer to this is: ‘I did.’ Before we ever used the collar on Flip, I tested it on myself to make sure she would not be hurt by the vibration. ‘Build a real fence, mate!’ say others.

Had they ever met a Patterdale terrier, they would know they will dig under a fence within minutes. One of my wife’s first pets, a sausage dog called Emma, did just that and was duly squashed by a lorry.

As for people who claim that Patterdales can be trained by positive food rewards, I can only say that I admire their optimism.

The bile spouted by some animal-rights fanatics is odd. If they were really interested in animal welfare, would they not consider the freedom of movement these collars afford our animals?

Pet insurers Petplan claim 250,000 cats are hit by cars every year in Britain. Is that not far more cruel than a system which gives them one or two vibrations when they are young, and then keeps them off the road for the rest of their lives?

Owners of containment fences have included a former chief vet of the RSPCA — hardly someone who was horrible to animals. Transport Secretary Chris Grayling, most mild-mannered of men, uses one for his cat. Grayling the cat torturer? Come off it.

As a long-term admirer of Environment Secretary Michael Gove, I am baffled. Why on earth is he thinking of banning collars which allow people to take the initiative and let their cats and dogs enjoy the open air and freedom of gardens without having to worry about their safety?

These collars are entirely good for animal welfare. Mr Gove supposedly believes in a small state. He is opposed to ‘nanny government’ making our lives worse. But here is his department set to ruin the pet-care arrangements of thousands of citizens just trying to do the responsible thing.

Only this week the minister attended the relaunch of the Tory Party’s youth movement, which has been rebranded ‘Freer’. The idea behind that new name is a good one. Party strategists believe there is a growing public desire for individual liberty.

Voters are fed up being told what not to do by a patronising elite. In areas such as data protection, careers, pensions, the EU, freedom of expression and others, many of us are fed up with being lectured by the Establishment ‘blob’ (as Mr Gove has himself called it).

Why is he now siding with that very blob, after a cynical political campaign by big-shot charities whose lobbyists are forever seeking new laws to justify their existences? Ban, ban, ban. That’s always the blob’s way.

Why? I’m afraid the answer is itself horribly cynical. The Conservative Party, having stupidly promised in its 2017 election manifesto to give MPs another vote on fox-hunting, is now bending too far in the other direction to show itself pro-animals.

A Tory backbencher I know was one of a group of MPs recently given a briefing by Downing Street and told that ‘animal rights is polling well so we’re going to be doing more of that’.

As a dog owner — correction, we dog owners know that the dogs really own us — I am all in favour of preventing unnecessary animal suffering. That is why, like thousands of other pet lovers, I use a containment fence.

Please, Mr Gove, put a stop to the electoral games and short-term propaganda tactics. Put animal freedoms first. Have nothing to do with this illiberal, life-shortening, counter-productive ban.

After what happened to our lovely Cinders, I never again want a dog of mine to crawl, whimpering, to my front door after being run over in the road.

But that is the likely upshot of this dreadful proposal.