An elderly couple who were killed in a horror car crash that is being treated as a suspected murder-suicide have been identified.

Robert and Elizabeth Makara died after their white Nissan Qashqai SUV crashed head-on into a tree at Pacific Paradise on the Sunshine Coast at 7am on Easter Sunday.

Mr Makara, 69, who had been driving the vehicle, and Mrs Makara, 68, were rushed to Sunshine Coast University Hospital.

Mr Makara died a short time later while his wife succumbed to her injuries and died at 10pm that night.

Robert Makara, 69, (pictured) and his wife Elizabeth, 68, died when their white Nissan Qashqai SUV  crashed head-on into a tree at Pacific Paradise on the Sunshine Coast at 7am on Easter Sunday

Police confirmed on Monday the deaths were being treated as a murder-suicide after preliminary investigations uncovered suicide notes in the car and at a home.

But Mr Makara’s brother Geoffrey said he had suffered health issues for many years and he thought his sibling may have had a heart attack at the wheel.

‘He’s the best brother I ever had, he was always kind to me.’

Geoffrey said the couple were ‘warm friendly people’ and his brother, who was the director of family business Makara Constructions, was well respected in the local building industry.

He said his sister-in-law had also suffered from health problems in recent years but had previously always been very sociable and active within the community.

Tributes have begun pouring in online for the Maroochydore couple who have been remembered as ‘very nice people’ and ‘beautiful souls’, with many offering condolences to their family. 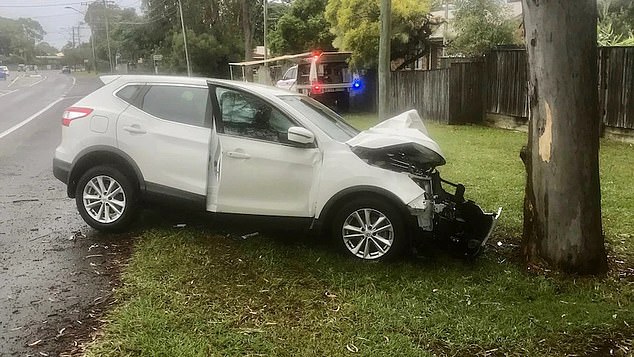 Mr Makara was an avid golfer and fisherman who ran his well-known company, which was founded in 1971, with his son Tony.

Makara Constructions is one of Queensland’s leading precast tilt panel contractors and has supplied major firms, including McNab, Karloo Constructions and Focal Group.

Police investigations into the incident are ongoing.

Anyone with dashcam footage of the crash or the moments before have been urged to contact police.