This is the shocking moment a five-foot long cobra was filmed regurgitating another snake.

Harish Chandra Parida, who lives in Satyabadi in Puri district, Odisha, India, was surprised to find the huge reptile in his home on September 27.

Mr Parida said the snake had taken refuge under a rice drum in the kitchen and he called the Snake Helpline to come and remove the cobra.

A five-foot snake can be seen slowly regurgitating a smaller cobra in this video filmed in Satyabadi in Puri district, Odisha, India 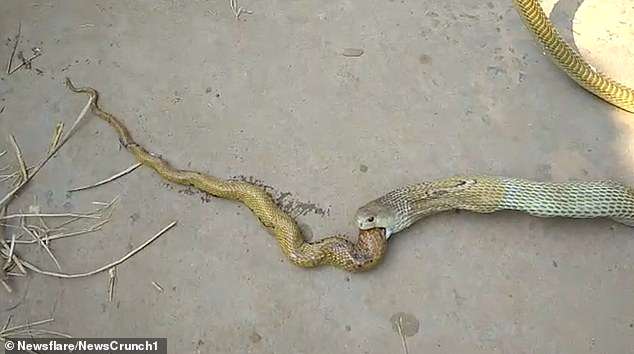 A Snake Helpline volunteer Susant Behera responded to the distress call and rescued the cobra.

But to Mr Behera’s surprise, the cobra started moving to regurgitate something. First, the tail, and slowly the full body of the smaller snake came out of the cobra’s mouth.

‘However, a cobra vomiting another cobra is surely a rare phenomenon.’

In the shocking video the cobra can be seen moving around the floor as the smaller snake appears from the bigger snake’s mouth.

A man appears to be holding the long yellow cobra as it regurgitates its prey and moves backwards to allow the snake to come back up. 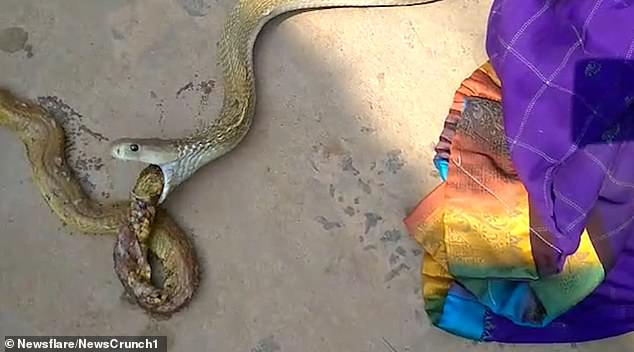 A volunteer was called to remove the cobra after it was found under a rice drum in a kitchen. The General Secretary of Snake helpline explained how when snakes sense danger, they ‘regurgitate their meal to make a quick getaway’ 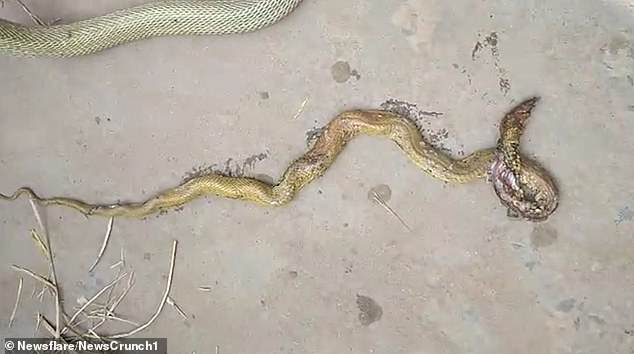 After a few seconds the entire body has been released and the camera hovers over the dead snake while the yellow cobra moves around it – showing the difference in their size.

Dozens of people have gathered to watch the rare spectacle and they can be seen stood in a circle around the two snakes.

The Indian cobra can range in size from three to five-foot in length. Although some, such as those found in Sri Lanka, have been known to grow to more than 7-foot.