Shocked mourners believe person in a coffin was buried alive

This is the creepy moment a corpse appears to wave from inside a coffin.

The person was being buried during a Christian service in the city of Manado in North Sulawesi, Indonesia, on May 5.

As their devastated family gathered round and the priest read prayers, the sinister outline of a hand and fingers could be seen moving under the glass panel in the casket.

In the video, the priest is heard saying: ‘God has said in the book of John. I am the resurrection and the life. Whoever believes in me he will live even though he is dead.’ 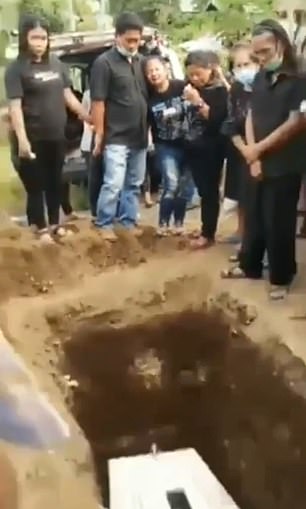 Mourners were able to view the corpse during the funeral in Manado, North Sulawesi, Indonesia because the body was being buried in a coffin with a glass panel on the front

Moments later the limb seems to wave or press its hand against the coffin lid.

Footage emerged earlier this month and locals suggested the body was waving or trying to escape from the coffin. However, it’s not know if the person was still alive or if anybody checked.

‘Yes, he waved, maybe he was still alive and try to dig his way out,’ wrote Yunita Ouwa online.

Despite the macabre claims, the corpse was likely to have been moving around due to rigor mortis and the changes in ligaments during decomposition.

A study reported in Medical News Today in September 2019 found that human bodies can move on their own after death.

Researchers from Central Queensland University in Rockhampton, Australia, who were studying the process of decomposition found that, without any external ‘assistance,’ human remains can change their position. This discovery has important implications for forensic science.