A stunned taxi driver has recalled the moment he found the world’s ‘most venomous spider’ inside a packet of supermarket bananas.

When Joe Stein, 37, opened his bag of fruit he discovered a 2in ‘dark mass’ hanging from the fruit – and was terrified to see it twitch.

He threw it into the bin outside and after steadying his nerves, retrieved it, and looked up the hairy specimen – only to discover it appeared to be a deadly Brazilian wandering spider.

Brazilian wandering spiders belong to the genus Phoneutria – which means ‘murderess’ in Greek. It’s one of the most venomous spiders on Earth and its bite can be deadly to humans.

Joe, from Beckenham, Kent, said: ‘I sort of had to refocus my eyes so I could see his big bony, hairy legs. It was a bit shocking!’

‘Obviously I was shocked, my girlfriend was a bit shocked, finding out it was a venomous spider if alive.

‘Luckily I think it was dead, but it was enough to make us both jump and feel on edge.

‘I want to make people aware and to be careful.’ 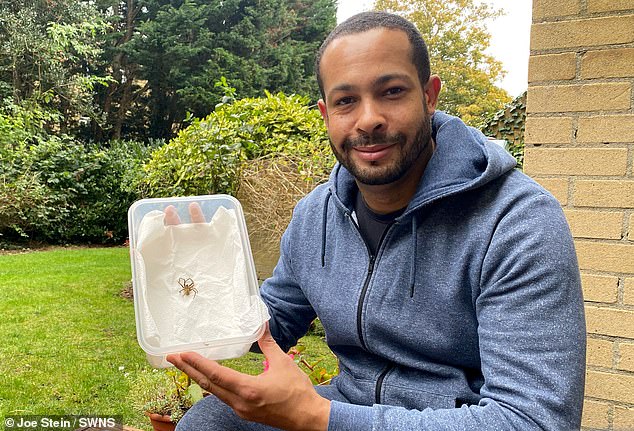 Joe Stein, 37, (pictured) found the 2in creature hiding inside a bag of bananas he had bought from Sainsbury’s in Bromley

The taxi driver had bought the bunch of bananas, grown in Colombia, from a Sainsbury’s store in West Wickham, Bromley on Monday.

When he went to slice up the bananas to have with his porridge the next morning, he opened the bag and discovered the terrifying spider’s carcass.

He said: ‘Opened the bag, everything fine, turned the bananas over and all I saw was this huge dark mass hanging on to the bananas.

‘It was a spider and it started to move so I shouted to my girlfriend “don’t come in the kitchen!”‘

He quickly threw the whole bag in his outside bin, warning his girlfriend Natasha Gooda, 39, to stay away.

Arachnophobe Joe crept back out after three hours had passed and fished the bag containing the spider out the bin.

He said: ‘I emptied the whole bag into a plastic box, and as soon as it fell out I put lid on it and I could tell it wasn’t moving.

‘We Googled it and it looks 99% like the wandering spider.’

The Brazilian wandering spider, or Phoneutria fera, is commonly found in South America and is often found on banana leaves or bunches.

Also known as the banana spider, they gain their name from the habit of moving across jungle floors at night in search of food. 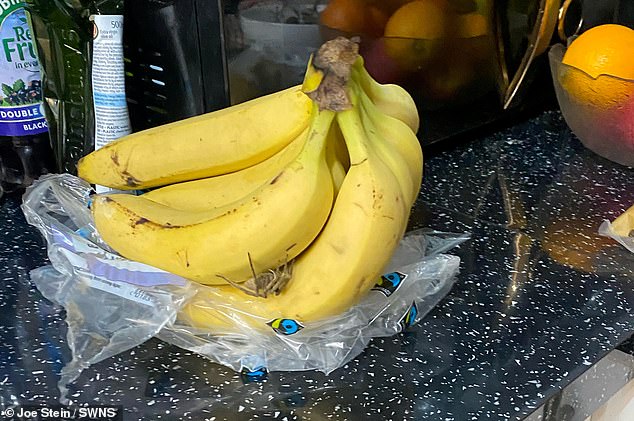 The spider, understood to be dead, can be seen wedged between two bananas that were imported from Colombia

The Guinness Book of World Records has named it the most venomous spider in the world for possessing the most active neurotoxic venom of any living spider.

Their venom is toxic to the nervous system, causing symptoms such as salivation and an irregular heartbeat.

The venom can also be known to cause a long, painful erection to human males.

Stepfather-of-one Joe said: ‘I saw a few pictures, it looked identical; the big hairy legs, the big abdomen with the little humps coming out and a black line.

‘I was a bit shocked to find out it’s one of the most venomous and dangerous spiders in the world.’

Joe and mental health nurse Natasha contacted Sainsbury’s who told them to send the spider to them for further investigation.

The bananas are in the bin, but the spider remains in a plastic wrapper outside their home.

A Sainsbury’s spokesperson said: ‘We’re in touch with the customer to apologise for their experience.

‘Incidents like this are extremely rare and we have processes in place to prevent them.’

What is the deadly Brazilian Wandering Spider and when have they been seen in Britain?

The Brazilian wandering spider appears in the Guinness Book of World Records as the world’s most venomous arachnid. Its scientific name – Phoneutria – is Greek for ‘murderess’.

They are known as the wandering spider because they do not build webs, but instead walk the jungle floor at night looking for prey.

Brazilian wandering spiders are nocturnal, and so find places to hide during the day. This is why they are so dangerous, because they hide in houses and cars, where they are easily disturbed by humans. 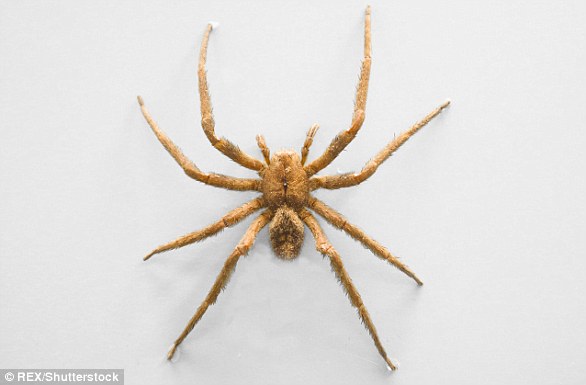 Brazilian wandering spiders are nocturnal, and so find places to hide during the day. File photo

They may be considered the most toxic spider, but they are not the biggest. Their leg-span reaches up to five inches.

When the spiders are defending themselves, they lift their body up on their hind legs in a defensive display.

Bites killed 14 people until an antidote was found in 1996.

The venom causes extreme pain and inflammation, loss of muscle control and breathing problems, resulting in paralysis and eventual asphyxiation.

The spider’s bite can also cause an unwanted erection in men, sometimes lasting for four hours.

In one case, a single spider killed two children in São Sebastião, Brazil. In 2005, a British man spent a week in hospital after he was bitten by a Brazilian wandering spider that had travelled to the country in a shipment of bananas.

In 2005, a British man spent a week in hospital after he was bitten by one of the spiders that had travelled to the country in a shipment of bananas.

A Tesco in Chatham, Kent, was closed after one was spotted in 2008.