Dramatic before and after satellite images show the extent to which entire areas of North Carolina were inundated with flood waters caused by Florence.

Wallace is a town that lies about 35 miles northeast of Wilmington.

The images show just how extensive was the damage wrought by floods to farmland, homes, and other local businesses.

More than 84,000 homes and businesses in North Carolina were still without power on Thursday in the wake of Hurricane Florence which hit the state’s coast on Sept. 14, according to local power companies. 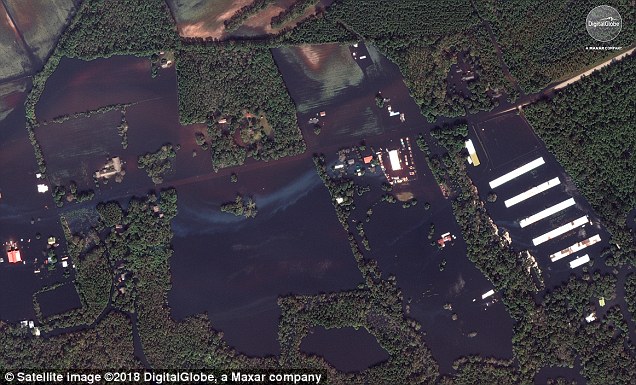 A flooded farm, in the aftermath of Hurricane Florence, is seen in this satellite image over the area surrounding Wallace, North Carolina on Thursday 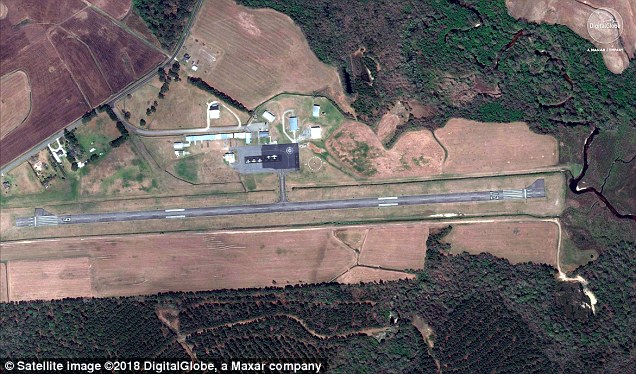 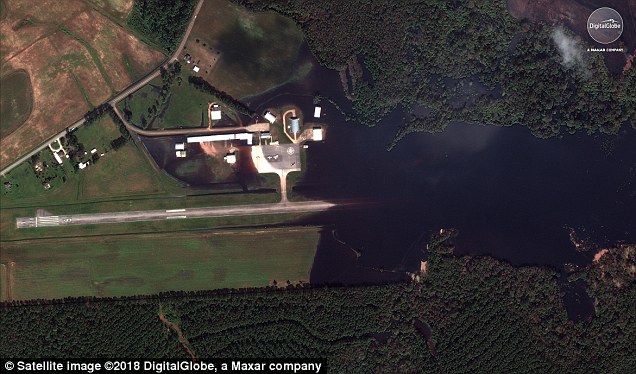 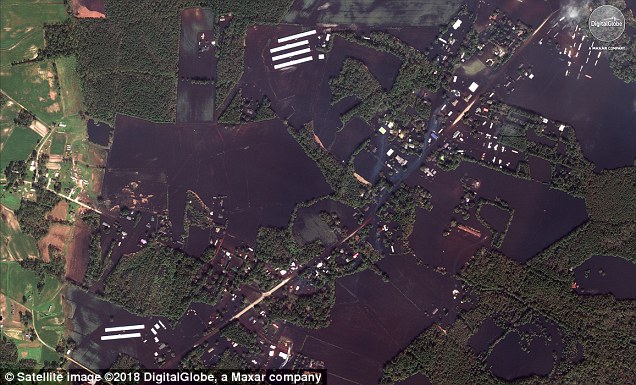 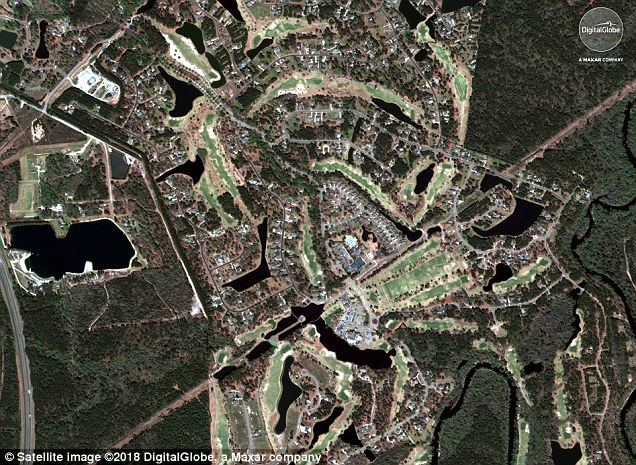 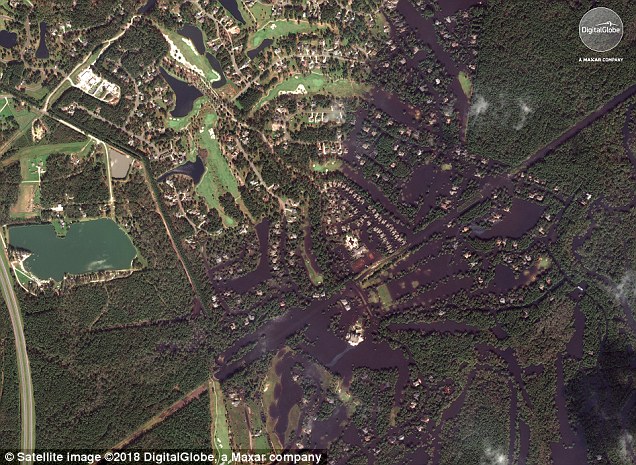 The images show just how extensive was the damage wrought by floods to farmland, homes, and other local businesses 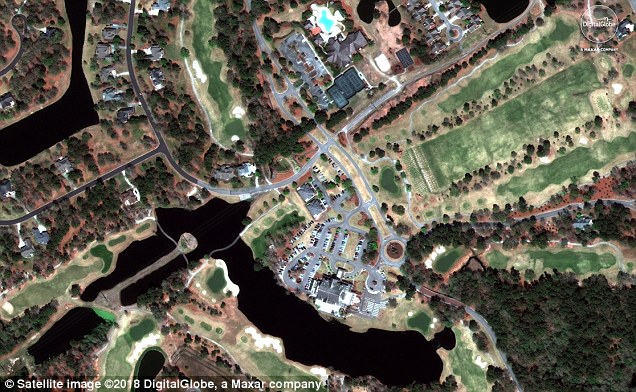 A closeup of flooded homes and roads near the River Landing Country Club, in the aftermath of Hurricane Florence, is seen in this satellite image over the area in Wallace 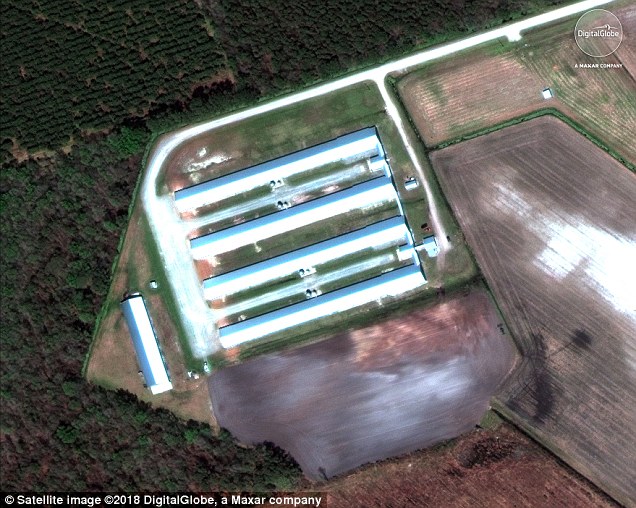 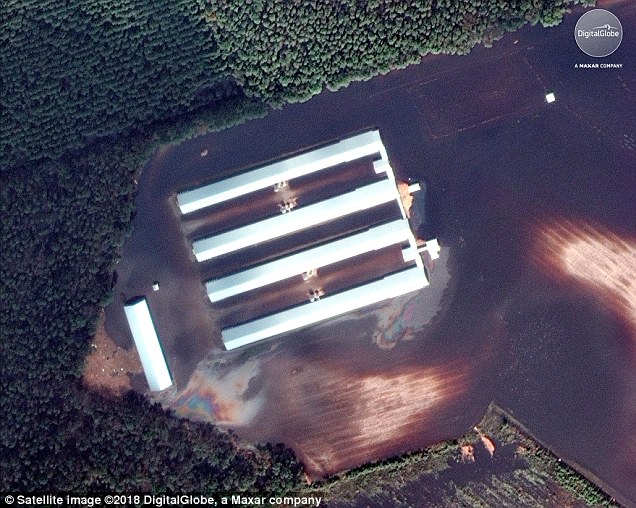 A flooded chicken farm, in the aftermath of Hurricane Florence, is seen in this satellite image over the area surrounding Wallace, North Carolina taken on Thursday

That figure is down from a peak of 2.1 million total customers who were affected after the storm passed through several Southeast and Mid-Atlantic states over the past week.

Flooding across the Carolinas was expected to worsen over the next couple of days, forecasters said. Officials say 41 people have been killed.

Duke Energy Corp, the biggest utility in the area with over 4 million customers, said it has restored power to more than 1.6 million of its nearly 1.7 million customers affected by the storm.

The company said it expects to restore service to most customers by Sept. 26.

Roads were still clogged with people trying to make it back to where the floods had creeped back, leaving silty mud on walls and floors.

Crews closed some bridges and reopened others as trillions of gallons of water continued its long, meandering journey to the Atlantic Ocean. This combination of photos shows a member of the North Carolina Task Force urban search and rescue team on Sept. 16, 2018, left, and on Sept. 19, 2018, after the water receded in the aftermath of Hurricane Florence in Fayetteville, North Carolina 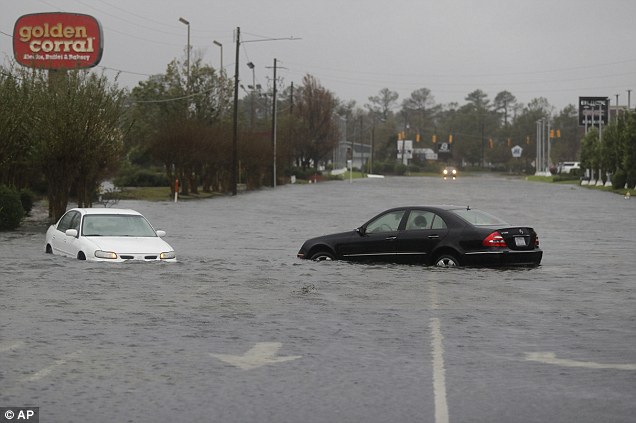 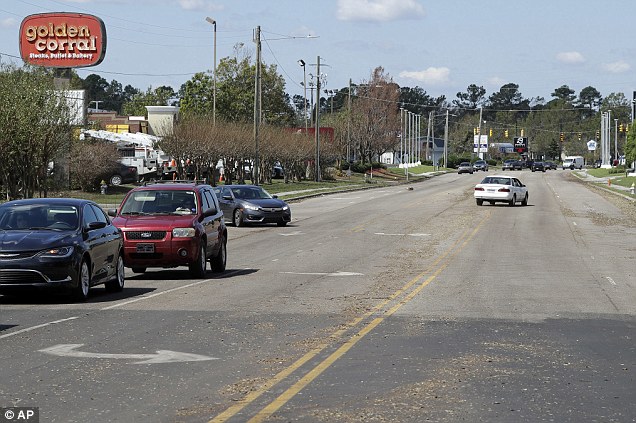 In this combination of photos, water inundates a street on Sept. 15, 2018, left, and on Sept. 19, 2018, after the water receded in the aftermath of Hurricane Florence in Wilmington, North Carolina 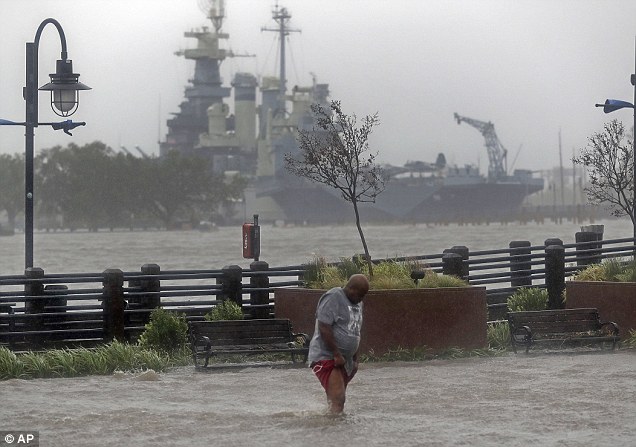 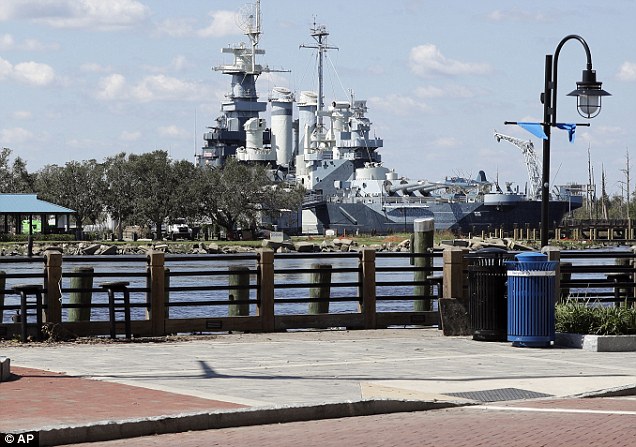 In this combination of photos, a man tries to cross a flooded street on Sept. 14, 2018, left, and on Sept. 19, 2018, after the water receded in the aftermath of Hurricane Florence in Wilmington 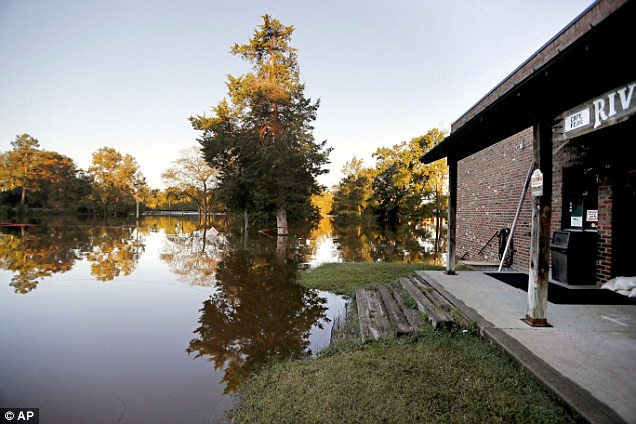 The image on the right shows Cape Fear River coming up to the doorstep of a bait and tackle shop in Fayetteville on Wednesday. The image on the left shows the same shop days before the river crested 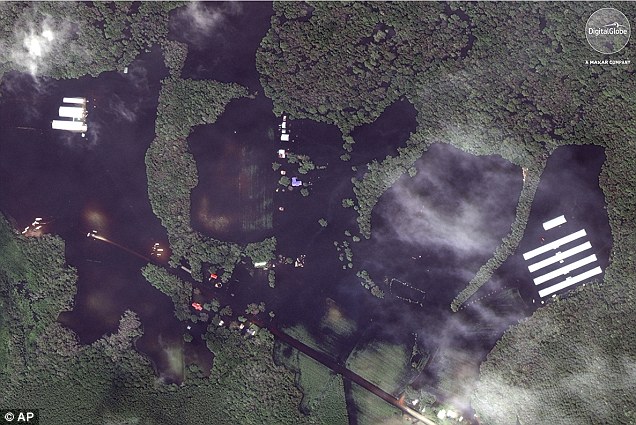 This combination of satellite images shows a farm on Jan. 13, 2017, left, and after Hurricane Florence moved through the area on Sept. 17, 2018, near Trenton

The utility said it did not think any coal ash was at risk.

State-owned utility Santee Cooper in South Carolina is placing an inflatable dam around a coal ash pond near Conway, saying the extra 2.5 feet should be enough to keep floodwaters out.

Officials warned human, hog and other animal waste were mixing in with floodwaters in the Carolinas.

South Carolina Gov. Henry McMaster estimated damage from the flood in his state at $1.2billion in a letter that says the flooding will be the worst disaster in the state’s modern history.

North Carolina Gov. Roy Cooper said he knows the damage in his state will add up to billions of dollars, but said with the effects on the storm ongoing, there was no way to make a more accurate estimate.

Florence is blamed for at least 41 deaths in North Carolina, South Carolina and Virginia.

Well over half of those killed were in vehicles.

In North Carolina, a familiar story was unfolding as many places that flooded in Hurricane Matthew in 2016 were once again inundated.

Pastor Floyd Benfield walked inside his Presbyterian Church of the Covenant in Spring Lake now that the Little River has retreated.

Two years ago, flooding ruined the baseboards and carpet.

This year, the water broke the windows, leaving the pews a jumbled mess and soaked Bibles and hymn books on the floor.

‘This sanctuary was built in 1909, and it never flooded until Hurricane Matthew,’ Benfield said.

In Wilmington, things kept creeping back closer to normal in the state’s largest coastal city.

Officials announced the end of a curfew and the resumption of regular trash pickup.

But they said access to the city of 120,000 was still limited and asked people who evacuated to wait a few more days.

They also warned people to not get caught off guard as rivers that briefly receded were periodically rising back.

Parts of the main north-south route on the East coast, Interstate 95, and the main road to Wilmington, Interstate 40, remain flooded and will likely be closed at least until nearly the end of September, North Carolina Department of Transportation Secretary Jim Trogdon said.

More than a thousand other roads from major highways to neighborhood lanes are closed in the Carolinas, officials said. 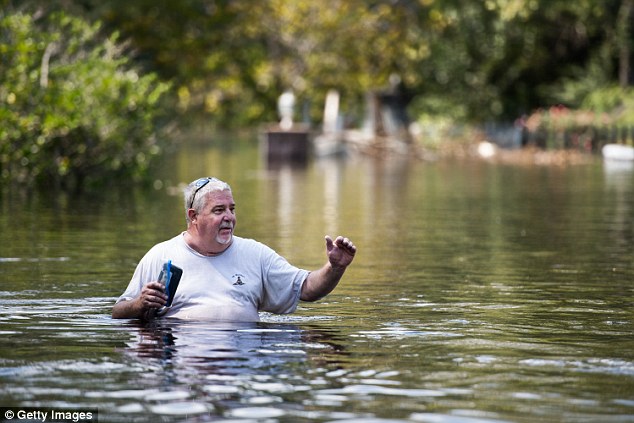 George Butler, left, removes valuables from his home as floodwaters from Hurricane Florence rise on September 20, 2018 in Longs 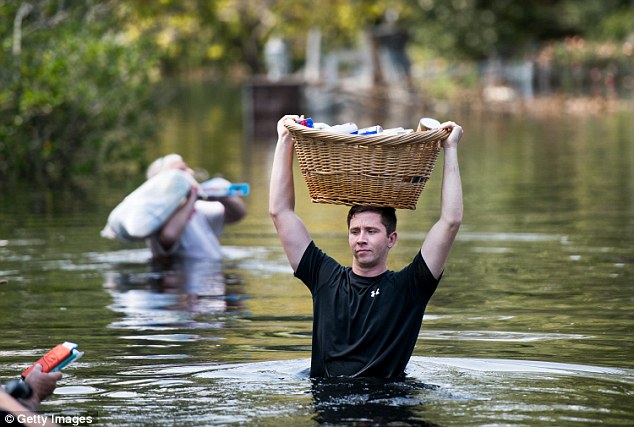 A man paddles a boat through floodwaters caused by Hurricane Florence on September 20, 2018 in Longs

Some of them have been washed out entirely.

In South Carolina, the flood was far from over.

The water appeared to stop rising in Nichols, but the town of 360 was almost entirely submerged for the second time in three years.

Jodi Pajaro owned one of the few houses in Nichols that wasn’t flooded in 2016 by the Little Pee Dee and the Lumber Rivers which flow past either side of the town.

She evacuated like the rest of the residents and tenses up each time her cellphone dings.

It is frequently pictures from friends who are rescuers riding boats in town.

In the last one she saw, the water was maybe an inch or two from her front door.

‘It doesn’t look good. I am heartbroken,’ she wrote in a text.

The flood has been giving so much warning to Horry County, South Carolina, that officials published a detailed map of places that flooded in 2016 and warned those same places were going underwater again.

One man had time to build a 6-foot high dirt berm around his house. Rental trucks and flatbeds whisked furniture and valuables out of homes that were still dry in Conway.

The Waccamaw River has started its slow rise in the city of 23,000, and forecasters expect it to swell more than 3 feet above the previous record crest by Tuesday while still rising.

Some areas could stay underwater for weeks, forecasters warned.

All that water from Nichols and Conway is heading toward Georgetown County, where five different rivers dump into the Atlantic Ocean.

Officials warned more than 10 percent of the county’s 61,000 residents might have to evacuate sometime next week, but called that a worst-case scenario and they couldn’t give any specific forecast.

‘We’re at the end of the line of all waters to come down,’ said Georgetown County Administrator Sel Hemingway, as he warned the area may see a flood like it has never seen before.