A children’s play centre where a two-year-old girl was sexually assaulted in a storeroom has said it is ‘devastated’ by the sickening attack – as a manhunt continues for the perpetrator.

The toddler was found by another child in the storeroom of the Lollipop’s Playland and Cafe in Penrith in western Sydney at about 12.20pm on Sunday.

Her worried mother had been searching for her for 20 minutes before the other child heard the youngster crying and in a ‘distressed state’.

The two-year-old was taken to Westmead Children’s Hospital with multiple injuries.

The child mentioned something about ‘a man’ to police, though it is not known if she was talking about her attacker.

A father who was at the centre at the time said the incident ‘made him sick’.

‘I let my three-year-old daughter run around by herself for a bit,’ he told The Daily Telegraph.

‘It was very busy there yesterday towards midday, the staff looked very busy due to the cafe and everyone wanting food.

‘I don’t know how someone dodgy would get into the place other than maybe saying they were there for a party.’

Police are now combing through a sign-in sheet used for COVID-19 contact tracing to uncover who was in the centre at the time of the assault, with it believed the girl was assaulted by a man who was not known to her.

The owners of the Lollipop’s Playland said in a statement the centre would be closed on Monday as police established a crime scene – but would re-open on Tuesday.

‘As parents of young children ourselves we are devastated for the family involved and are fully co-operating with the police investigation, our centre remains closed temporarily,’ the owners said in a statement.

‘The safety of our customers and staff is always paramount. We thank you all for your support and understanding in this difficult time.’

Naomi Gent – another mother who was in the centre at the time of the assault – said the venue was packed with children and adults.

‘Just before 2.30pm, we were told that the centre was closing down and we could all leave and we were given free entry to come back,’ she told ABC News.

‘We found on the way out that there was an incident.

‘They took a photo of our ID, our drivers licences and we had a sign-in sheet with our names and phone numbers.’

Given the toddler was found alone without the perpetrator, descriptive details of the man are not yet known.

Lollipop’s Playland and Café is a national play centre chain with 28 locations across the country in NSW, Victoria, Queensland, WA, SA, and the ACT.

Detective Superintendent John Kerlatec, commander of the Child Abuse and Sex Crimes Squad, said they are ‘going through every skerrick of CCTV available’.

‘The child was very distressed when she was found and we are taking it at its worst for now,’ Det Supt Kerlatec said. 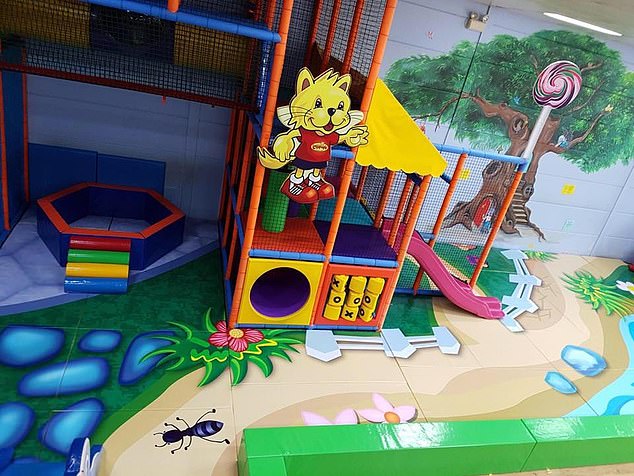 He said there were ‘a number of functions for children’s birthday parties’ at the time of the assault but he does not know the exact number of people in Lollipop’s.

The detective said the child’s ‘injuries are sufficient enough to be very concerned’.

‘We must keep an open mind, a child between two and three can only provide so much information,’ he said.

‘There is no suggestion at all (that staff) were involved. They’ve been fully cooperative – they are as concerned as we are.’ 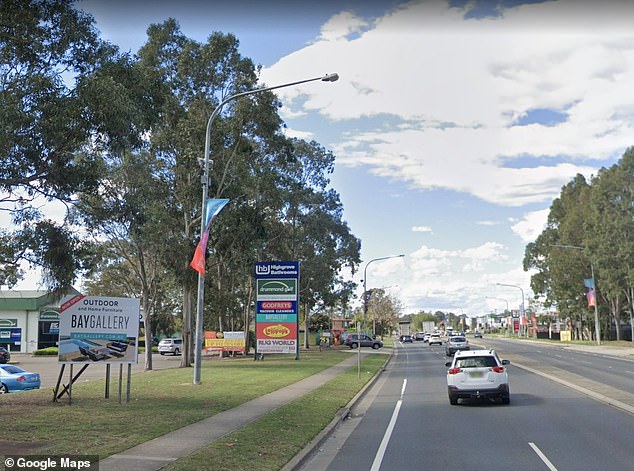 Mulgoa Road (pictured) in Penrith, where the Lollipop’s Playland is located. On Facebook, the play centre said: ‘Lollipops Penrith will be closed today and will reopen tomorrow at 9:30am.’

He said they were even open to the possibility that another child may have assaulted the two-year-old and police are ‘keeping an open mind’.

‘Yes they do, there’s a register due to COVID restrictions of everyone entering the centre. And that’s been provided to us, we’re currently searching through that, looking through that,’ Mr Kerlatec said.

Anyone with information about the assault should call Crime Stoppers on 1800 333 000 or use the online reporting page at crimestoppers.com.au.