This disturbing video shows a suspected spice addict howl and writhe on the ground as city centre shoppers stroll past.

The unknown man is contorted around a pole as he starts a moaning noise which gradually increases in volume to a howl.

His eyes bulge out and his mouth opens wide as he starts doing a ‘backstroke’ on the pavement.

Finally, the man picks himself up and runs off screaming, barging into a woman before crashing heavily into a shop sign.

The events in Leicester are accompanied by gasps and laughter. The video was posted to a Facebook group page dedicated to videos of users under the influence of synthetic cannabis.

It was posted yesterday night, at around 9pm, with the caption: ‘Don’t smoke that s***.’ 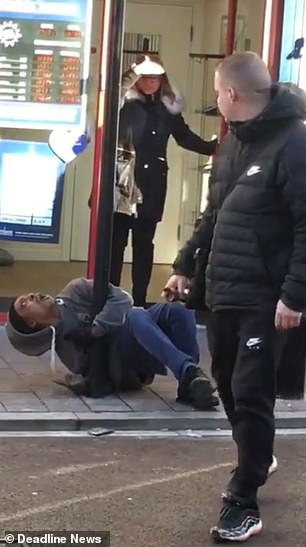 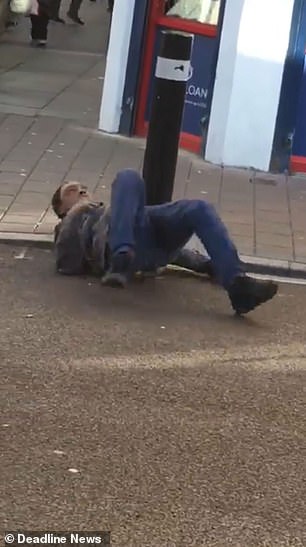 Pictured, left: A woman appears concerned as the man wraps himself around a bollard and, right, the man lies on his back in Leicester

The clip begins with the man on the concrete ground, wrapped around a pole outside a pawnbrokers – the outdoor market behind the camera and not visible.

He groans with increasing volume, grasping the pole tightly and looking up at the sky as a woman from the pawnbrokers holds the door open and looks on extremely concerned.

The man continues to howl and scream even louder as he desperately clutches the pole.

Some members of the public choose to ignore him, while some cannot help but look on.

At this point, his eyes visibly bulge out from his skill, his mouth widens, and he contorts as though possessed by a demon.

His shrieking grows with intensity, with members of the public parroting some of his shrieking back to him. 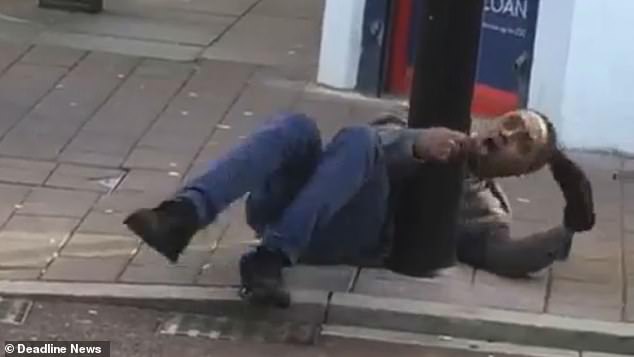 He also begins writhing more heavily on the ground, as though paddling backwards, and unwraps himself around a pole.

Standing up to run away, the man drops what appears to be a black hat, and races off down the street.

Before the clip ends he can be seen still screaming, and running into people and obstacles, tripping up repeatedly.

Andrew Spires commented: ‘If it was my choice, I would stick them in 12 to 16 week detox prison cell, 23 hours a day with basic nutrition to survive.’

Soph Louise Bradburn said: ‘F***** up.’ Lisa Marie wrote: ‘Last time I took my four-year-old son into Sheffield town centre there were scenes like this. He was petrified. Something needs doing.’