This is the moment a 12-year-old boy was knocked into a bull-pen before a Spanish bull-run event, leaving stunned onlookers rushing to save him.

The shocking accident happened in the town of Tavernes de la Valldigna, in the eastern Spanish region of Valencia, during the annual fiesta.

The boy had been watching the bulls from a high platform above their pen, but fell when one of the animals managed to break the rail he was leaning on. 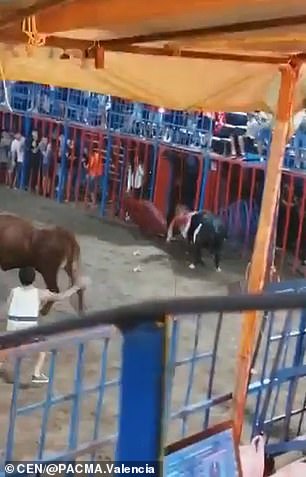 A 12-year-old boy was trampled by a bull at a fiesta in Spain, near Valencia, after the animal broke a piece of safety railing (left) and the youngster tumbled into the pen (right)

In footage of the incident the bull can be seen lifting up a heavy metal gate with its horns, which in turn knocks away a section of the safety rail above it.

The young boy then falls into the ring at the bull’s feet, as the confused animal butts at him with its horns and tramples him underfoot.

Onlookers quickly come rushing to the boy’s aid and scare the animal away before it can do any major damage.

The youngster is then helped back to safety so he can be tended by medics.

Local media reported on Sunday that he was being kept under medical observation, but was not seriously hurt. 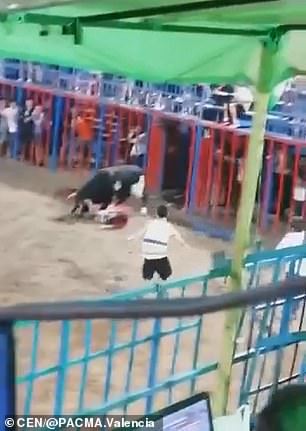 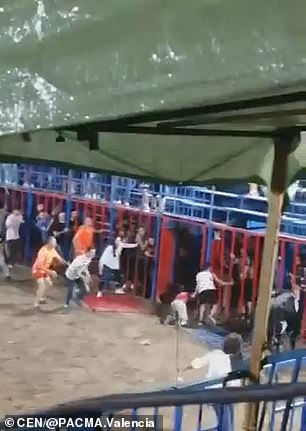 Spanish animal-rights political party PACMA shared the video on social media and said they are readying a report into what happened.

The party claims that childhood protection laws were broken at the event because children are exposed to potential harm and animal cruelty.

Authorities are said to have reviewed their safety measures following the incident and allowed the fiesta to continue.

Bull-running events began on September 14 and are set to continue until next weekend.