Shocking moment a driver accidentally steps on gas pedal, plows his SUV through a Miami cafeteria

‘Like a bomb – BOOM!’ Shocking moment an SUV barrels through Miami cafeteria after the driver accidentally stepped on the wrong pedal, injuring himself and a female clerk

A motorist accidentally pressed his SUV’s gas pedal and plowed through a local cafeteria in Miami, trapping a female clerk behind the counter.

Customers could be seen sitting at tables and waiting in front of a counter to be tended while another visitor is about to go for the exit door moments before the motorist thought he was playing his foot down on the brakes.

Instead, the unnamed driver sent his truck careening through the glass structure at La Nueva Alameda Cafeteria Saturday afternoon.

A female employee was wedged in between a counter, a refrigerator and a stand next to a wall, and a man who’s order she appeared to be taking was knocked off a bar stool. 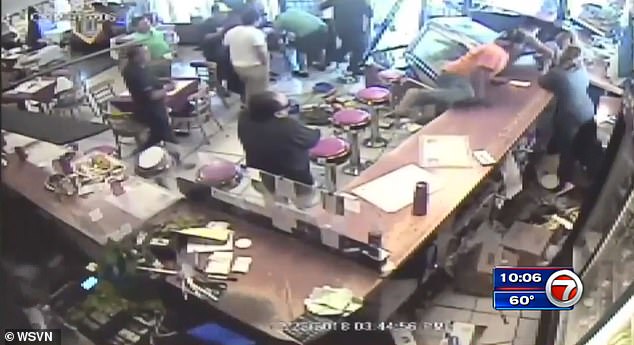 ‘I was like a bomb. Boom!’ Jorge Garcia, an employee at the Northwest Miami-Dade restaurant, told Miami television station WSNV.

Another customer who was close to leaving the cafeteria was hit in the face by the side of the door when it was thrust open by the impact of the crash.

He is seen on the security camera video bending over and clutching his face.

A victim, who’s identity was not provided, and the driver were taken to a local hospital, according to Miami-Dade Fire Rescue.

Multiple people were left injured by the accident.

‘The crash shocked everyone inside,’ Denis Carballo said through a translator. 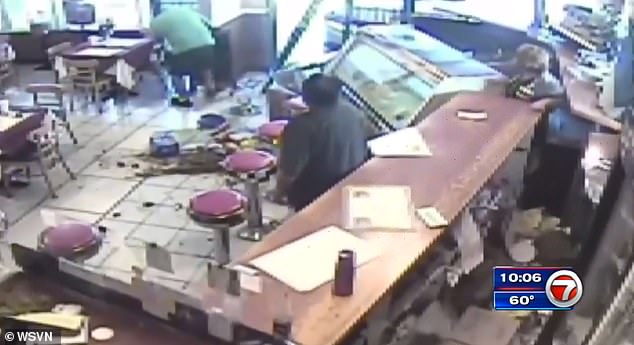 A male customer (top left),  who was hit by a door after a car crashed through a restaurant in Miami, bends over and grabs his head. Another man (center) looks on after he was knocked off his seat while a female employee (right) looks on in shock 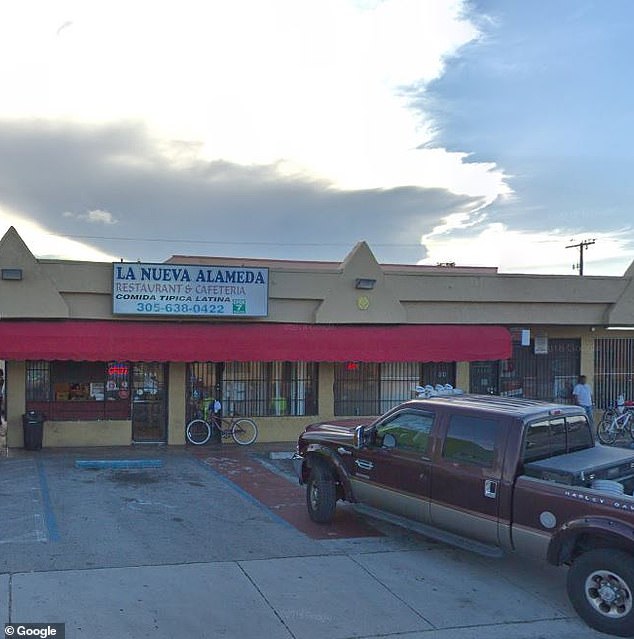 An SUV plowed right through the left side of a Miami eatery on Saturday, injuring multiple people. The driver and another person were taken to a hospital

The incident has forced La Nueva Alameda Cafeteria to shut down it’s business operation for the foreseeable future.

The accident incurred thousands of dollars worth of damages.

‘We’re going to be closed for a while because, I mean, it’s going to take a while to fix all these things up and put it back again to work,’ said Garcia.