Shocking moment a pair of thieves use an angle grinder to steal a £1,000 electric bike

Gone in EIGHT seconds: Shocking moment brazen thieves use an angle grinder to cut through chain and steal £1,000 electric bike in broad daylight

This was the shocking moment thieves used an angle grinder to steal an electric bike worth £1,000.

Sparks fly as the two men brazenly cut through a metal chain in just eight seconds.

When they are challenged by a passer-by the men shout abuse at him and ride off.

The theft took place in prestigious area of Lincoln Inn Fields in Holborn, London, where many of the country’s leading law firms have their offices.

The witness told Mail Online: ‘I heard the angle grinder go off. I called out to them, but they just told me to **** off. It all happened so quickly. There were people milling about, but they didn’t seem to care who saw them.’

Both the thieves wore hoods to mask their identity while one arrived on a bike during the theft last week.

‘I’ve had a bike stolen but this was in the middle of London with so many people around. Hopefully they will be caught on CCTV somewhere,’ said the witness.

‘It is disgusting that they can get away with it. Usually I would intervene, but this time decided to video them.

According to insurance figures as many as 20,000 bikes are stolen each year in London. 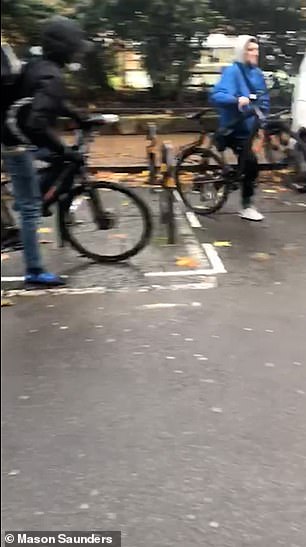 The two men were filmed at 9am last Tuesday at Lincoln Inn Fields in Holborn, London, as they used an angle grinder to cut a chain in eight seconds before riding off on a stolen electric bike

A dedicated website stolen-bikes.co.uk lists all the bikes that have been stolen.

Owners are able to post a photo of their bike in the hope that they might be recognised before being sold on for a fraction of its original price.

A reformed bike thief revealed in an interview with the website stolen ride.co.uk that a bike worth £1,000 would be sold for less than £500.

The unnamed thief said he would use the web-based shopping site Gumtree to sell the stolen bikes while he had also had connections to others in the UK who would buy from him.

Working in pairs – as this video showed – they would cruise around the streets of London looking for expensive bikes to steal.

The thief said any bike worth less than £200 would not be touched.

It is not known if the owner of the stolen electric bike had reported the theft to police.