Video footage has captured the bizarre moment a violent fight breaks out between strangers trading insults at a petrol station.

In the clip, an inebriated man asks for a lift from a stranger before making crude jokes about his mother and then hurling beer cans at his car.

This enrages the motorist who furiously leaves his vehicle to throw a blistering punch at the man which sends him flying backwards crashing into the petrol station newspaper stand.

The incident was filmed at BP petrol station in Wilton Road, Salisbury, Wiltshire over the weekend.

It is unknown who filmed the clip however the footage has been circulating online since yesterday. 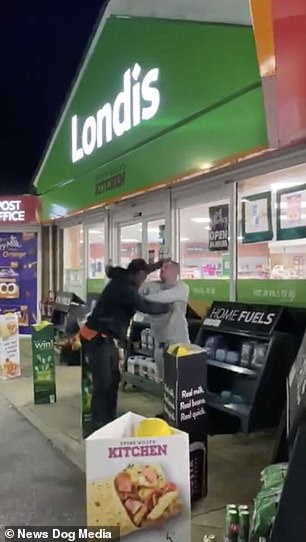 The video begins with the loud-mouthed man – who is swigging beers outside the petrol station – drunkenly asking the random driver for a lift to the Heath.

The drunk man asks the driver: ‘Can I have a lift to the Heath or not?’

The motorist demands that he pays for the lift, replying: ‘Fifty quid mate!’

The inebriated male and his masked mate laugh at this request and shout back vulgar insults at the driver.

The pair yell at the motorist: ‘Fifty quid?! Up your mother’s pooch yeh.

The drunk man in the grey sweater then hurls a beer can straight at the driver’s car.

This enrages the motorist who furiously leaves his vehicle and squares up to the inebriated male – shouting ‘Are you mad? Are you mad?’

The motorist then throws a savage punch directly at the drunk man which sends him flying backwards into the petrol station display stands.

The inebriated male throws a vicious blow back at the driver before fleeing into the petrol station store. 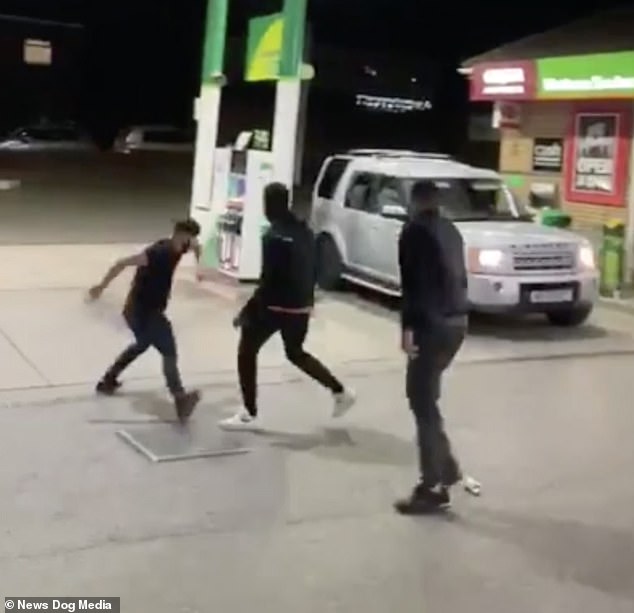 The motorist then tussles and chases after the drunk man’s friend who runs away from the driver in fear.

The driver’s friend has also joined the fight and is filmed aggressively brawling and shoving the drunk man in anger.

The motorist is then seen running back to the cameraman and shouting at him to delete the footage.