An ‘aggressive’ cyclist threatened a biker with a knife in front of a queue of horrified drivers stuck in traffic in north London.

The footage, taken in Finsbury Park, north London shows a man on a moped getting off and confronting a man on a motorbike, while brandishing a knife.

The armed man, dressed in a black top and blue jeans, waving the knife around aggressively, seems to threaten to stab the other man.

Visibly terrified, the biker, wearing a helmet and in bright motorcyclist gear, puts his hand up in a placating gesture.

He tries to calm the knife-wielding man down, talking quickly and urgently and retreating as the man advances on him.

After some angry words and more threats from the man with the knife, the two step away from each other.

Picking up his motorised bike, the armed man rushes away, clearly still angry, with his blade now hidden.

The biker heads off in the opposite direction, though he seems to take a few minutes to compose himself after the frightening encounter. 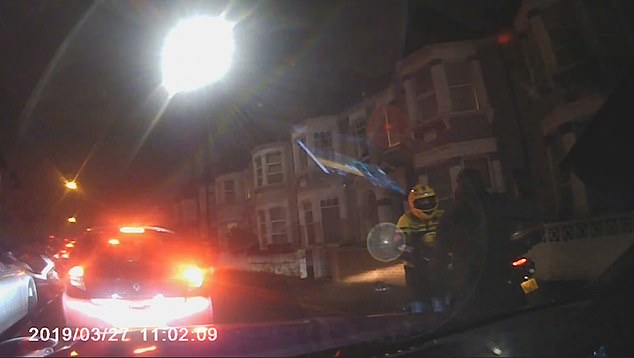 The biker backpedals in terror and tries to calm the knife-wielding man down, talking quickly and urgently 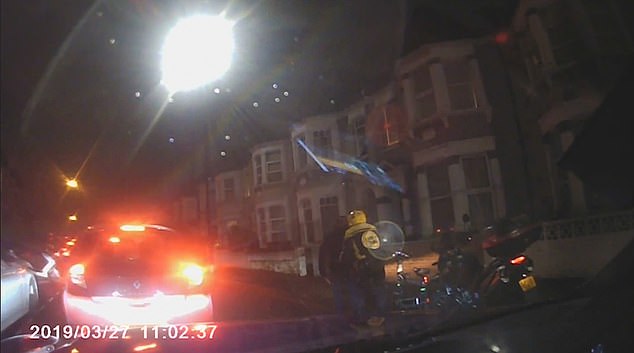 Eventually, after several aggressive movements, the armed man walks away, leaving the biker to ride off in the opposite direction

The terrifying face-off was filmed by a driver waiting in the queue of traffic.

Wishing to remain anonymous, they told Mail Online: ‘My wife and I were driving home from work and we had stopped in traffic. We saw two guys pull over.

‘Then the guy on the bike started waving around a knife – you could just see the look of horror on the motorcyclists face.

‘I just thought he’s going to stab him, he was so aggressive.

‘The two then went off in two different directions once things calmed down.’