Shocking moment cop wrestles woman, 72, to the ground after she ignored 13 orders to get out of road

Shocking moment cop wrestles eccentric California woman, 72, known as ‘Christmas Carol’ to the ground after she ignored 13 orders to move because she was waving and blowing kisses to drivers

This is the shocking moment a California cop wrestled an elderly woman to the ground after she ignored his orders to get out of the road while she waved and blew kisses at drivers.

A witness filmed the end of an incident where Carol Christensen, 72, nicknamed Christmas Carol, was seen sprawled in a South Lake Tahoe road on Tuesday morning.

Christensen had been asked by the police officer 13 times to get out of the way of moving traffic near a roadside construction site around 10am. 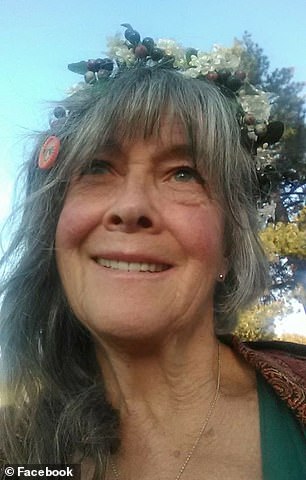 Carol Christensen, 72, was asked by the South Lake Tahoe, California police officer 13 times to move Tuesday. Cops claim she refused to move and then ‘became aggressive’

Despite meaning to get her out of harm’s way, a woman who saw the action from her store across the street believes he was heavy-handed.

‘When I saw him throw her to the ground, I was so frantic,’ Jessica Barackman told FOX40. ‘I just ran and grabbed my phone and ran out.’

Audio recorded from the officer’s dashcam picks up his voice claiming she fell to the ground.

In the clip the witness is heard yelling reassurance to Christensen. At one point she says: ‘He threw her to the ground. I’m videoing him because I’m going to report him. That’s insane. She did absolutely nothing wrong.’

It reveals the officer went to arrest her after a few minutes of verbally trying to get her out of the road, initially using his public address system then turning his vehicle around to speak to her. 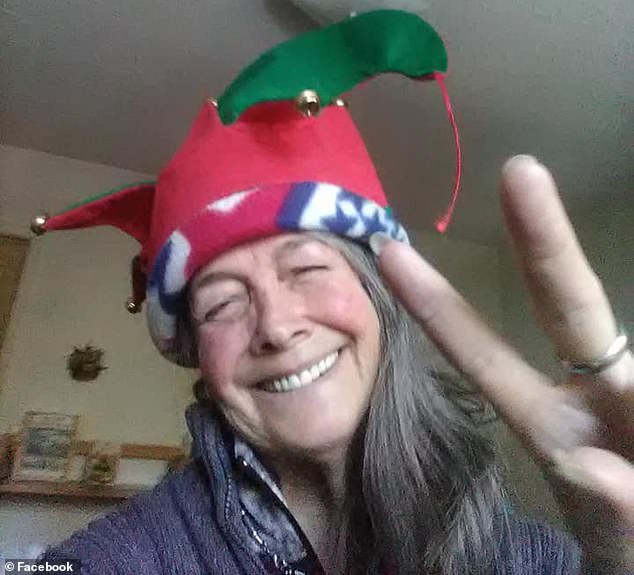 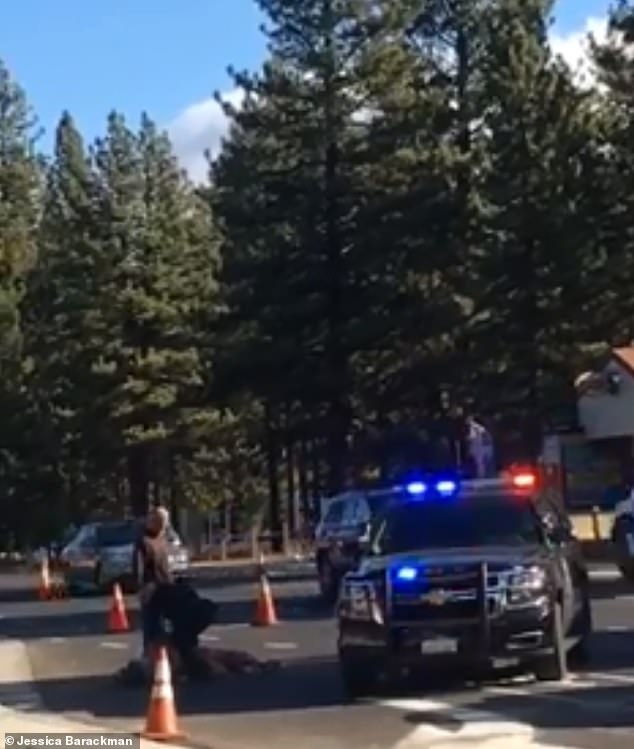 Christmas Carol is known locally for waving and blowing kisses to drivers. A witness filmed her on the ground and claims the cop threw her but the officer is heard on camera saying she fell

The department said ‘the officer’s dash cam showed she was on the road’s shoulder very close to crossing the line into the road’.

Police said that after requests for her to move onto the sidewalk Christensen told the officer she was putting him under citizen’s arrest and that people don’t belong in cages.

‘The officer told Christensen he didn’t want her to get hit by a car,’ cops stated. ‘She continued to refuse and then became aggressive toward the officer. He then had no choice but to take her into custody for her own safety.’

After she screamed and struggled with the law enforcement officer, backup arrived.

Police said ‘she was cited and released for obstructing or delaying a police officer in carrying out his duties’.

Christensen said she was hospitalized as her shoulder was dislocated during the arrest.

The city told the Tahoe Daily Tribune that the cop does not currently face discipline as they believe he followed protocol.

Barackman told CBS Sacramento: ‘I was sick to my stomach that they would hurt her like that. She’s one of the most nice ladies you’ll ever meet.’

Following the incident, Christensen told CBS ‘I just love everybody.’