This is the shocking moment a motorist lashes out with a knife while horrified children watch on during a road rage incident.

In the video filmed in Birmingham, a man can be seen squaring up to a driver in a grey cap.

Suddenly the hat-wearing motorist reaches into his pocket and retrieves a knife which he flips open and then swings towards the other person.

The weapon wielding driver chases the man down the road as a woman stepping out of her silver car shouts: ‘Move Jordan!’. 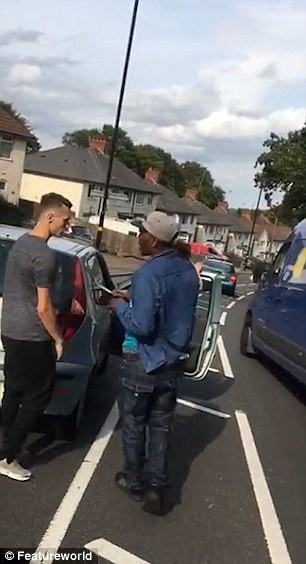 A terrified youngster can be seen sitting in the back of her vehicle and screaming as the chaos unfolds.

The cameraman soon replies: ‘I don’t care, [you] nearly killed me.’

But the woman insists that the man in the cap pulled out in front of her and her niece, ‘nearly killing’ them.

The man who took the footage – a taxi driver who’d just dropped off a customer – was stunned by the unfolding scenes of violence. 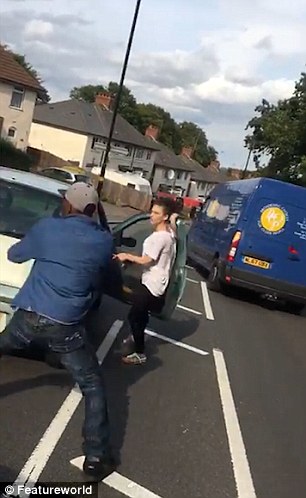 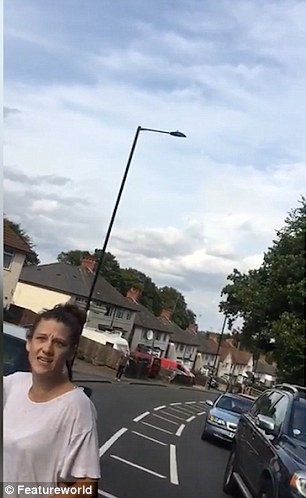 The weapon wielding driver chases the man down the road as a woman stepping out of her silver car shouts: ‘Move Jordan!’

He was forced to stop behind the two cars on the road and said: ‘There had clearly been some sort of road rage incident. The cars were stopped in the middle of the road forcing traffic to queue on both sides of the road.

‘At first both drivers got out of the car and began shouting, which was shocking enough. But then one of them pulled a massive knife from his clothing. It came from nowhere. He then chased the other driver who was running for his life.

‘As a taxi driver I am used to seeing all sorts on the roads. But I was shocked by what I saw. The driver with the knife had young kids in the back of his car.

‘They were witnessing this and they were in tears. The other driver’s girlfriend was running around beside herself with fear. However, no one dared to get out of their cars in case they were attacked. It was terrible.’

The taxi driver says he was even more shocked when he played his video back.

‘It brought it home to me just how dangerous Britain is becoming. Whatever your row with a driver is, you don’t expect a knife to be pulled on you – and in the middle of the day in a busy road.’

The footage was taken on Friday on Frankley Beeches Road just after 4pm and the taxi driver, who does not wish to be named, said he plans to hand the footage to the police.