This is the shocking moment a family-of-four stopped to take photographs on the tracks at a level crossing just minutes before a train hurtled past at 80mph.

CCTV images show a baseball cap-clad man, his partner and their two children standing in the middle of the potentially deadly cut-through in Hutton, Essex.

The girl can be seen pointing down the line as her father lines up a picture – unaware a speeding train was less than three minutes away.

A man wearing a baseball cap can be seen lining up a picture while stood in the middle of the tracks with his partner and two children nearby at the cut-through in Hutton, Essex

Network Rail posted the CCTV images on Wednesday, warning: ‘How many times do we need to say it – DO NOT take photos when using a level crossing’

The image has been released by Network Rail after it was captured at the crossing between Shenfield and Billericay on the Southend Victoria branch line.

The train operator tweeted: ‘How many times do we need to say it – DO NOT take photos when using a level crossing.

‘A train was less than three mins away when these people decided to. Never take a chance on a level crossing!’

Social media users reacted to the post, with one commenting: ‘Grade A parenting there.’

Another said: ‘Standing behind the fence gets just as great photos but you are safe. The driver gives you a thank you wave too.’

A third added: ‘Trains can approach and be on you within seconds; modern trains do not make a noise.’ 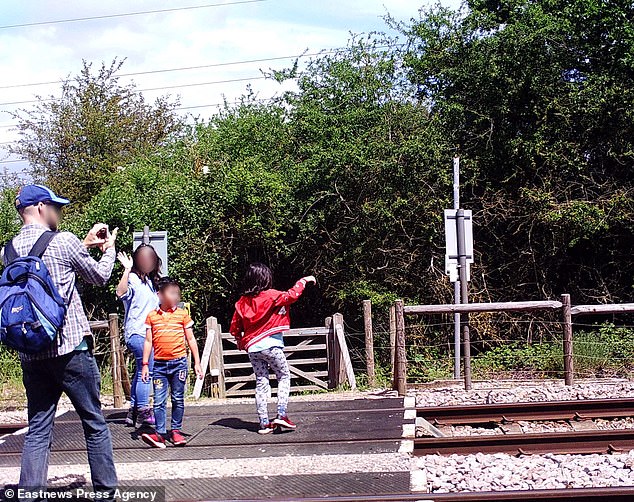 The family-of-four captured by CCTV in the middle of the potentially deadly cut-through, with the daughter seen pointing down the line in Essex 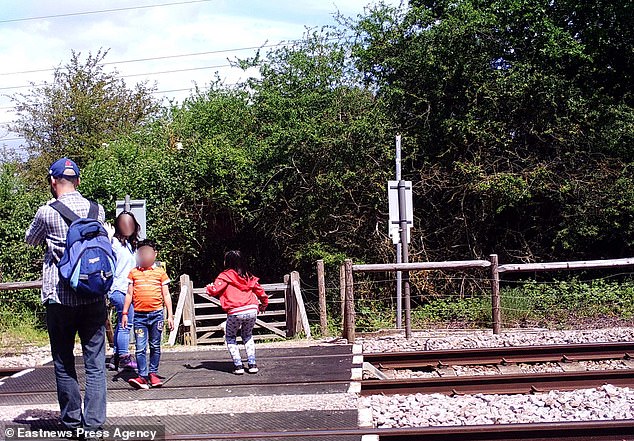 A train was less than three minutes away at the time, according to Network Rail, at the crossing between Shenfield and Billericay on the Southend Victoria branch line

Network Rail’s community safety manager, Becky Crocker, was shocked by the episode and has issued a stern warning.

She said: ‘Level crossings are dangerous and just as you wouldn’t stand in the middle of a busy road to take photographs, nor should you on a level crossing.

‘Trains travel at high speeds and can’t swerve out of the way or stop quickly and you don’t always hear them until its too late.

‘The consequences are devastating and those who live to tell the tale are likely to have serious and often life-changing injuries..

‘It’s really not worth it.’