This shocking footage shows how huge flames ripped through a town centre building and even prompted a funeral home to evacuate bodies.

Firefighters worked throughout the night to tackle the large building blaze after being called to the scene in Jamaica Street, Greenock, Scotland just after 5pm on Thursday.

Roads remain closed as emergency services deal with the fire in the Inverclyde town.

Green Oak Funeral Services also announced that they had moved bodies out of the funeral home and to another site as a precaution. 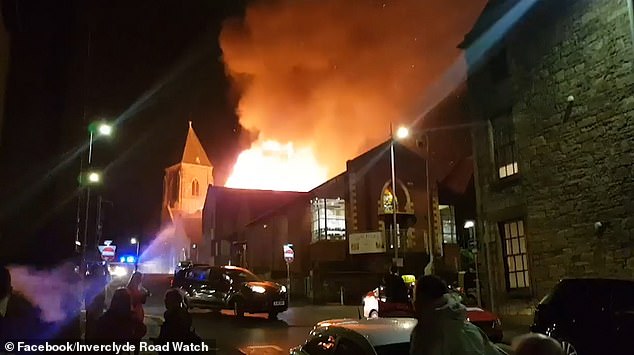 Two crews were still at the scene at 7am on Friday morning dampening down hot spots in the building, which is thought to be a furniture shop.

A fire service spokesman told Mail Online: ‘The Scottish Fire and Rescue Service was alerted at 5.07pm on Thursday, December 27 to reports of a building fire in Greenock.

‘Operations Control mobilised a number of fire engines to the town’s Jamaica Street, where firefighters were met by a large and well developed fire.

‘Crews have now brought the fire under control, but are currently working towards eliminating any remaining hotspots.

‘There are no casualties.’

In a post on its Facebook page, Green Oak Funeral Services said its landlines were unavailable but ‘all loved ones were being cared for in our Port Glasgow premises’.

The post said: ‘Many of you will be aware of the fire in Jamaica Street.

‘We would like to reassure our families that we have taken appropriate measures and all loved ones are being cared for in our Port Glasgow premises.’ 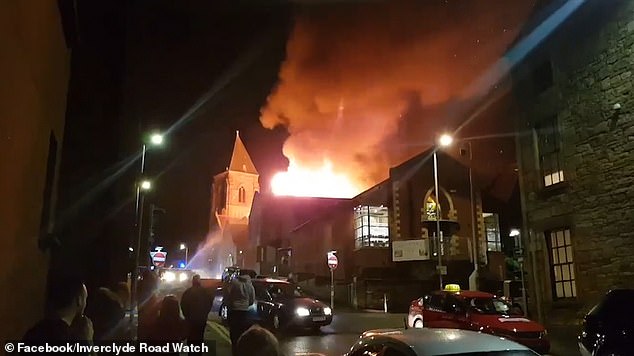 As of this morning, roads remain closed as emergency services try to deal with the remaining spots of fire