Gold Coast captain Kevin Proctor has been sent off for allegedly biting Kiwis teammate Shaun Johnson in the Titans’ NRL clash with Cronulla.

Proctor was marched for the incident in which he appeared to bite the forearm of the Sharks halfback while being tackled, before a slanging match ensued.

The 32-year-old could be heard saying ‘you were choking me you f***ing sook’ before he was marched by referee Henry Perenara on 56 minutes.

The 32-year-old Titans skipper (pictured) was playing against Cronulla-Sutherland Sharks at Kograh when he bit down onto the arm of New Zealand teammate Shaun Johnson, 29

Proctor became just the second player to be sent off this NRL season and the first during a match – after Manly enforcer Addin Fonua-Blake’s post-game spray at the referee in June.

The dismissal was checked with bunker officials before Proctor was sent off.

Saturday’s match at Netstrata Jubilee Stadium was level at 12-12 at the time of the second-half incident, before Cronulla jumped out to a 30-12 lead 18 minutes later.

Johnson later left the field with a groin injury in what could shape as a massive blow to Cronulla’s season.

Replays of the moment have been making the rounds on social media, with Twitter users calling Proctor calling him  ‘disgusting’ and a ‘grub’ for his actions. 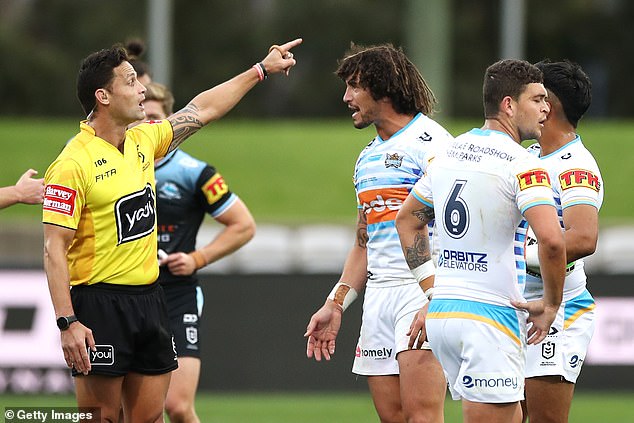 Proctor (pictured, centre), who was playing his 250th NRL game, was immediately sent off field by referee Henry Penerena after Johnson complained