Shocking surveillance video shows a man bounding two women together at a convenience store, dousing them with lighter fluid, and setting one of them on fire.

The incident took place on Thursday at the Pit Stop convenience store in Palestine, Texas.

Police say Robert Thompson, 40, walked into the store with a handgun.

Surveillance video shows the suspect asking the store clerk, Linda Camire, for something from behind the counter.

When she turns her back, Thompson pulls out his handgun. 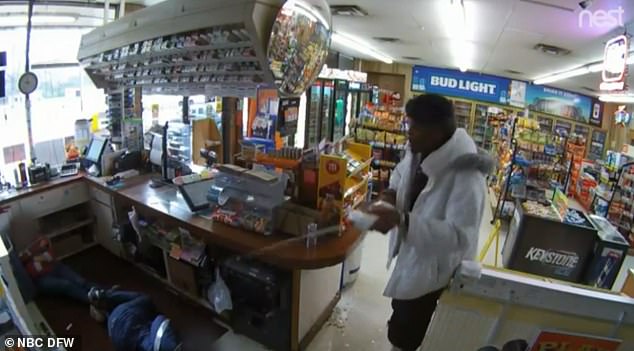 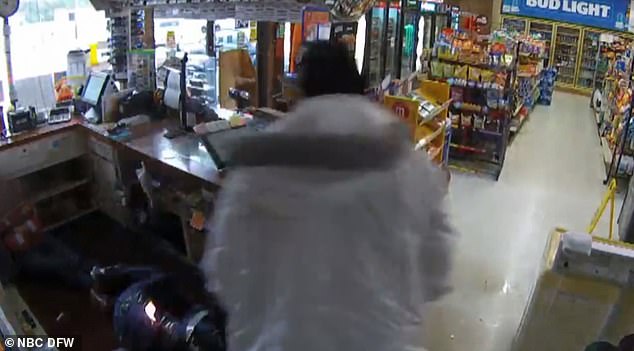 Thompson is then see lighting one of the women, Della Witt-Denizeri, on fire

He then walks behind the counter and forces the clerk into a corner, according to KLTV-TV.

As the clerk is forced to the ground, Thompson opens the cash register. Police say he took between $700-$800.

Thompson is then seen in the video going to the front door of the store.

He opens the door and steps outside, where a woman in a blue jacket approaches him. 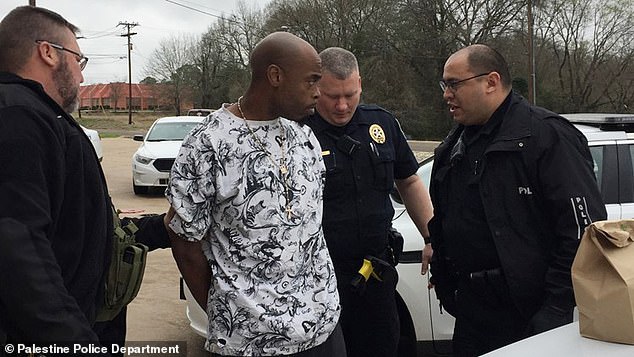 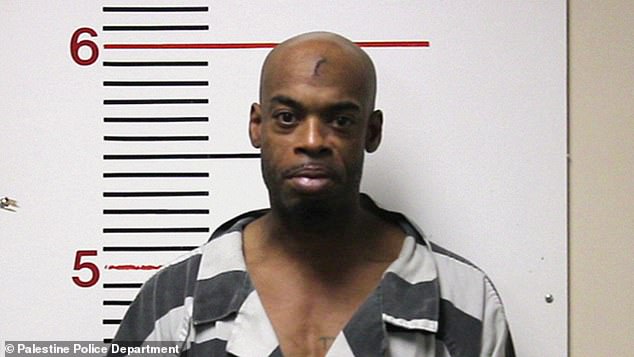 Police say Thompson, 40, a local resident, has had run-ins with the law in the past 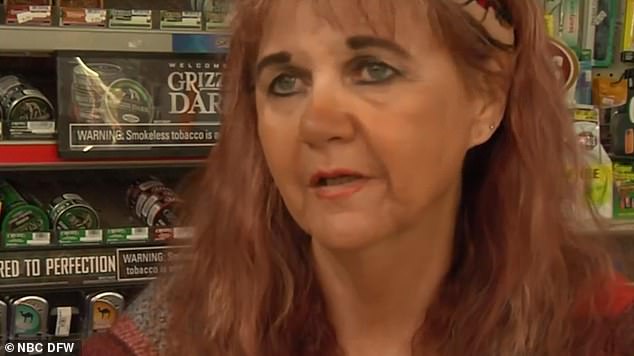 Linda Camire (above), the clerk, managed to pull the burning t-shirt off of Denizeri. Fortunately, Camire was not hurt

After a brief conversation, it appears Thompson and the woman embrace.

Thompson is then seen gently pushing the woman into the store. He leads her to the area behind the counter, where she sees the clerk bound on the floor.

Thompson then flashes his gun at the woman. Moments later, he ties her up as well.

In the video, Thompson is seen pouring lighter fluid on the two women as they lay bound helplessly behind the front counter.

‘He started taping me up everywhere and said as long as I was quiet and didn’t speak I’d be fine,’ Camire told KXAS-TV.

Camire said her eyes were covered, so she could only hear what was happening as Thompson doused both women with flammable liquid.

‘I was praying the whole time that [god] would help me, save me, that’s what I did,’ said Camire.

The customer has been identified as Della Witt-Denizeri.

She was rushed to the burn unit at Parkland Memorial Hospital in Dallas.

She suffered burns to her head, face, and neck.

Camire was not injured in the attack. Surveillance footage from another angle shows Thompson walk into the store 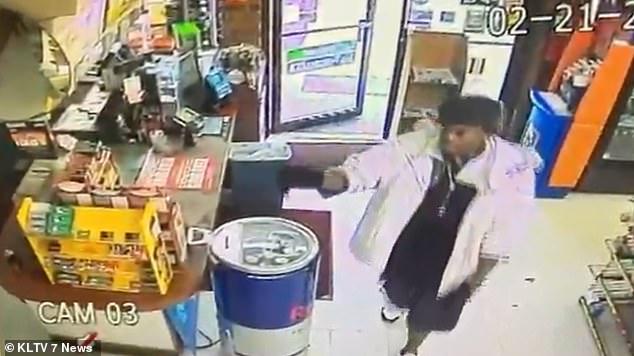 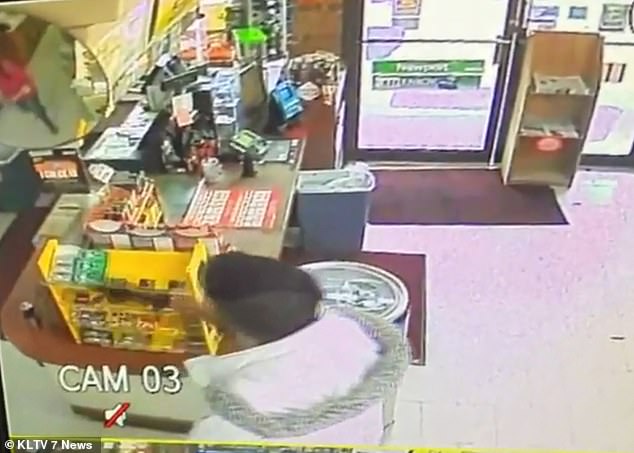 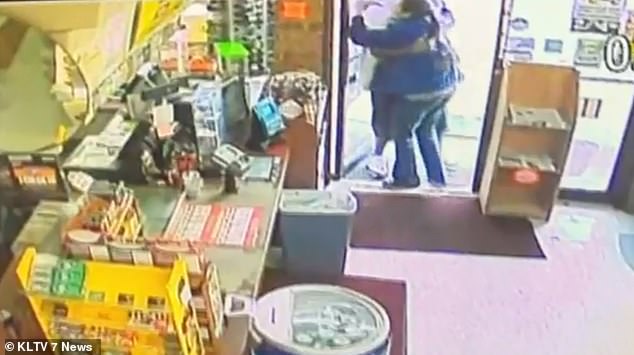 After he tied Camire down behind the counter, he is seen luring Denizeri into the store. The two are seen embracing each other near the front door 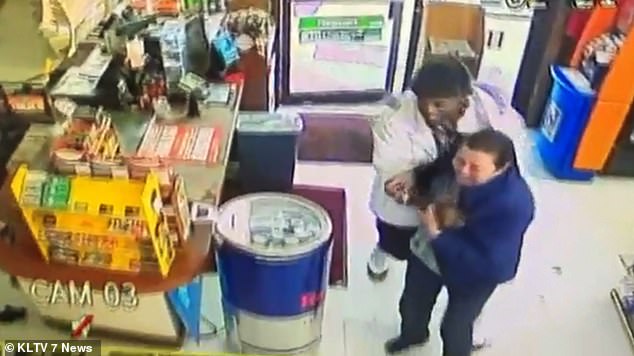 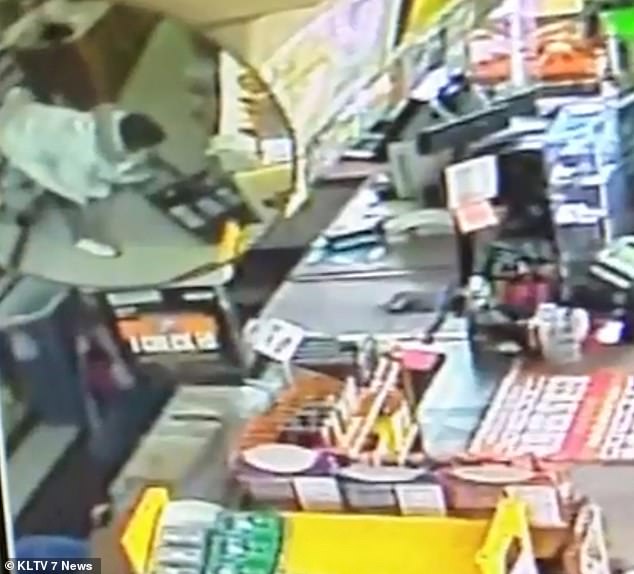 Police say Thompson walked away with between $700 and $800. He is seen above taking what appears to be cash 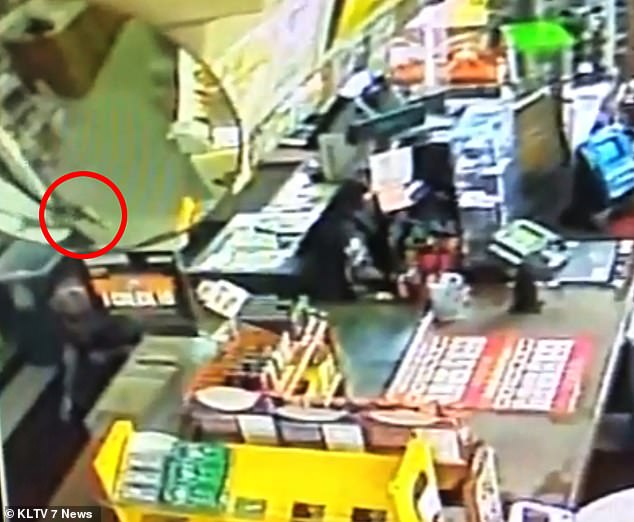 Andy Harvey, the chief of police in Palestine, said that Camire was able to pull off the burning shirt from Denizeri’s body.

‘The suspect … decided to pour lighter fluid on the cashier and the customer. Right before he left, he lit a match and lit them on fire,’ Harvey said.

Harvey later clarified that Denizeri was the only one who was set on fire.

The police chief said Thompson fled in a white Malibu or Impala on Highway 155.

The car was driven by a female, who is being questioned by police, according to Harvey.

Thompson was later found at a different gas station in the city.

Muhamammad Khan, the store owner, said Thompson bought the lighter fluid from her, left the store, and then came back to commit the crime.

‘All I can say is thank God no one got hurt that bad,’ Khan said.

Thompson has had previous run-ins with law enforcement, according to Harvey.

He has been charged in the past with drug-related crimes.

He has been arrested on a warrant for aggravated assault with a deadly weapon and aggravated robbery.

Bond will be set at $4million.