A shocking video seems to shows the moment a Charlton fan is knocked out cold by a police officer outside Old Trafford.

The man is seen approaching three police officers in the car park just moments after Manchester United’s win in a dominating 3-0 performance over Charlton at around 10pm on Tuesday evening.

He is knocked – apparently unconscious – to the floor before another man is restrained by three police officers.

Witnesses have said the policing of the game was unnecessarily aggressive and that officers did not show appropriate concern for the unconscious man.

A small tussle breaks out between a group of fans and some police officers. Witnesses said the game had been aggressively policed 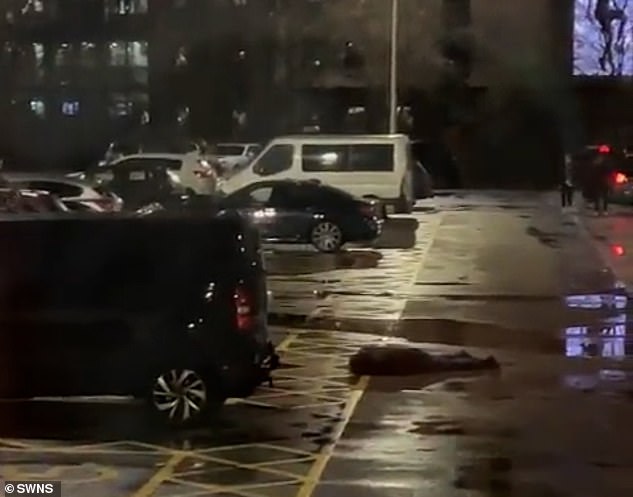 A small group of fans appear to be having a tussle with Greater Manchester police officers in the car park, which is relatively quiet, the footage shows.

The man is left lying face down on the floor next to a puddle in the wet weather, seemingly unconscious.

Horrified fans who saw the incident can be heard asking: ‘He’s knocked out, isn’t he?’

Another fan can be seen being taken away by three police officers, who at one point restrain him on the ground before lifting him off the ground. 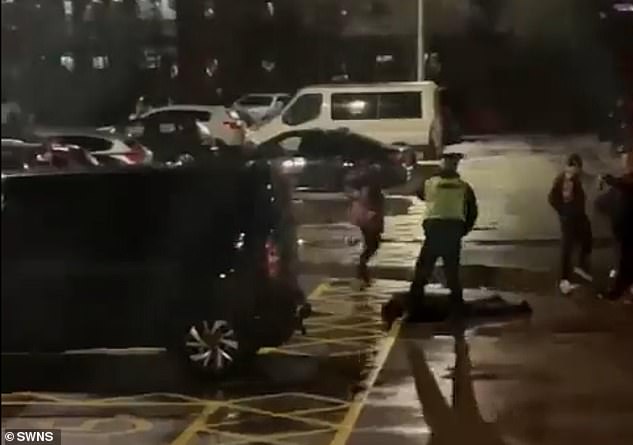 The police officers can be seen standing over the man, who is lying prone on the floor in the car park, before they walk away 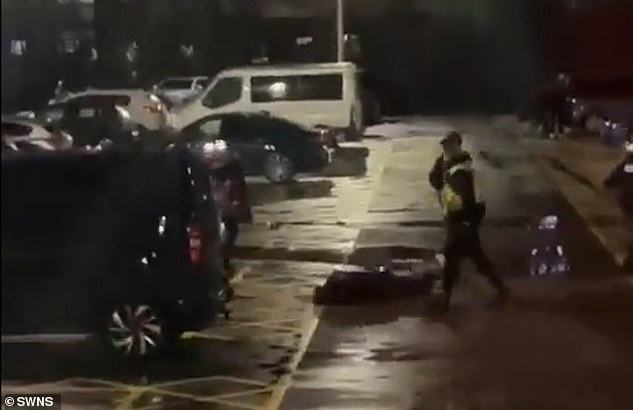 The fan, apparently unconscious, was left lying alone in the car park by the police officers, witnesses said

A witness to the incident, James, who didn’t want to share his surname, said that the incident had come ‘out of the blue’ as away team fans boarded buses home.

James, who filmed the clip, said: ‘It was out of the blue. All Charlton fans were behaving well, a few small disturbances as you get at a football match.

‘But the fella who got pushed by the police officer wasn’t really doing anything to deserve that force used on him.’ 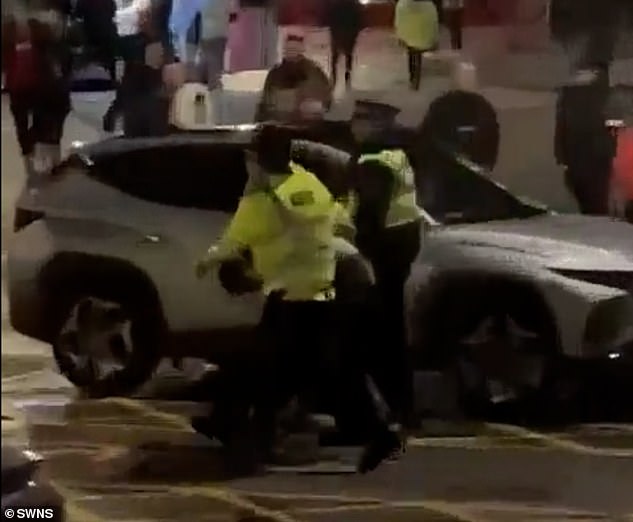 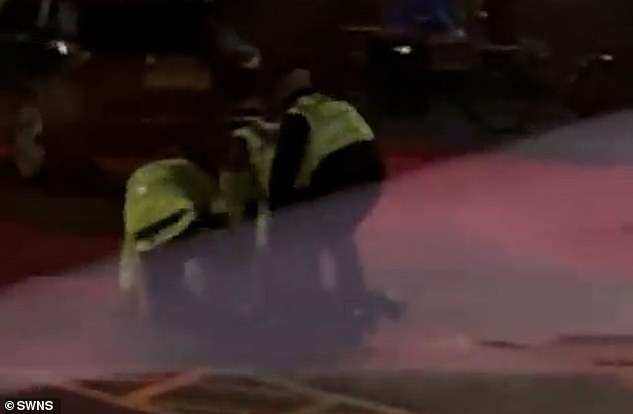 James expressed concern that the officers had not checked on the fan, who is left lying on the floor in the car park.

‘He was just left there. He could still be there now, who knows?

‘The officer didn’t even bother to check his welfare and if he’s injured, just walked off with two other officers.’

James added that he thought the treatment of away fans had been aggressive throughout the game.

Another witness, Lee, who watched the incident from his coach home, said they saw a man in handcuffs running from officers.

‘We saw a guy who appeared to have his hands in cuffs behind his back running off from police who were in chase.

‘He was caught further into the car park and once they had got him wrestled on the floor, he was then man handled and appeared to take a punch to the back of the head while on the floor.’

Then, Lee said, the police knocked another man to the floor – despite there not being any physical aggression from the fans.

‘As the police were returning back towards Old Trafford the officers came to the other guy and one of them pushed him back initially and then the second time the massive push ended up with the fan going down and staying down.

‘He did not get up for sometime and the police left him there not one officer checked on him, only a couple of other fans went to his aid once the police had walked away.

‘Eventually they got him sitting up on the floor where he stayed for a few minutes,’ Lee said.

He added that the fans had not been able to go to help the unconscious man as there was fencing around the car park.

He said he hoped fans would ‘get some answers from the Police about their actions and why after clearly assaulting a fan, they left him laying motionless on the rain soaked floor and did not show any concern for his well-being’.

Greater Manchester Police have been contacted for comment on the video.