Pictured: Bloodied face of man repeatedly kicked in the head as he lies on a train station platform – while horrified passengers try to intervene

This is the shocking moment a mass brawl erupted at a railway station after a row broke out between two groups of men on a train and spilled out onto the platform.

Disturbing scenes showed a man being repeatedly kicked in the head while he was down and another bleeding on the ground after being pummelled at Harpenden station near St Albans, Hertfordshire.

The victim Jake Strain, from Harpenden, is seen laying on the floor as as kicks rain down on him just after 3am on Saturday morning – on the eve of his 21st birthday. 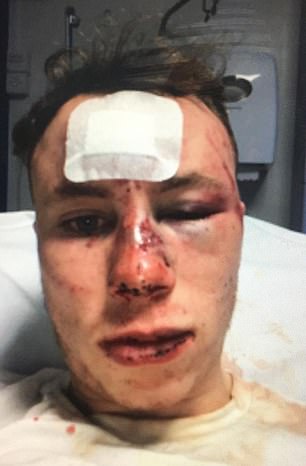 The fight in the early hours of Saturday morning at Harpenden railway station in Hertfordshire shocked fellow passengers (left). Jake Strain, 21, later took to social media to show his injuries

As Mr Strain stayed down, kicks and punches were thrown as the rival groups battered each other for several minutes, while brave onlookers desperately tried to stop the violence.

Do you know anyone involved…?

It is not known what sparked the clash but footage filmed by an onlooker showed a heated disturbance on board a train moments before the fight kicked off.

At the station, several scuffles are seen breaking out on the platform, as a woman briefly caught up in the brawl shouts: ‘Don’t touch me, you f****** idiot.’

A thug in a black coat spots a rival fighting with another man on the floor and runs up and boots him in the head while his guard is down.

While he reels from the blow, the attacker kicks out again and again as the person filming shouts: ‘Oh, s***.’ 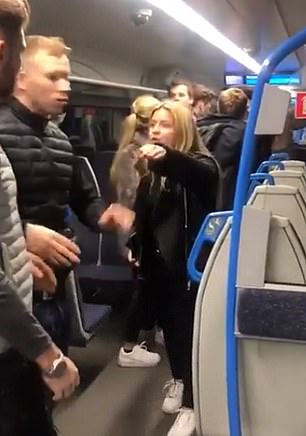 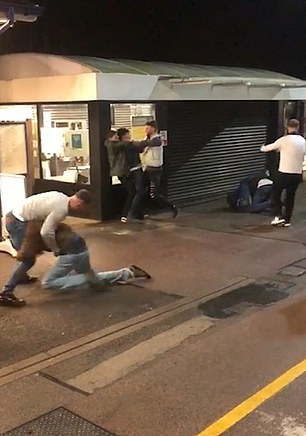 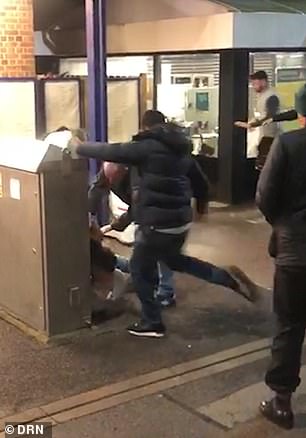 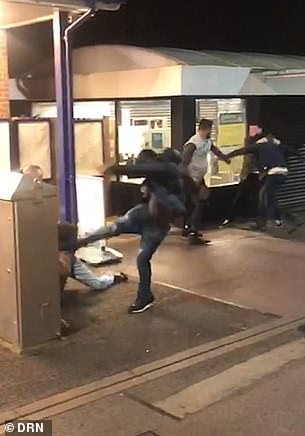 The yob then punches another man in the face when he tries to intervene, before running back and kicking the wounded victim in the head once more.

As more pockets of fighting continue to rage, another man is seen locking a rival in a choke-hold on the ground – who holds his face to shield himself from incoming kicks.

He manages to wriggle free and tries to get up but is shoved back to the ground and kicked repeatedly in the head by several men.

A final clip shows him lying bleeding on the floor as bystanders rush to his aid.

Video of the melee went viral on social media last night and has been viewed thousands of times.

Viewers were sickened by the scenes. One wrote: ‘Kicks in the head, sucker punches, three and four against one.’ Another called it ‘totally disgusting’. 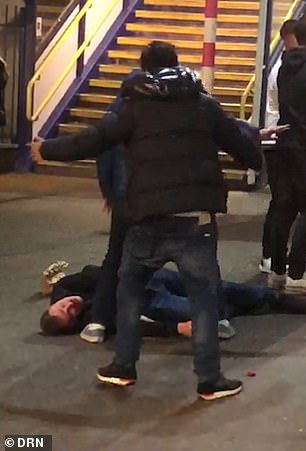 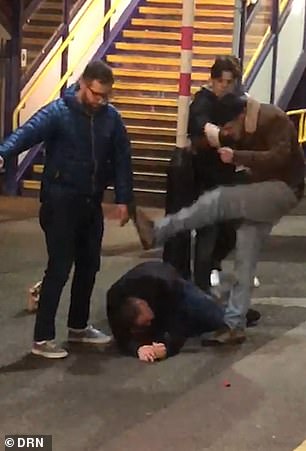 In another disturbing scene, a man was repeatedly kicked in the head while he was down on the ground

A British Transport Police spokesman said: ‘Officers were called to Harpenden station at 3.26am on 25 January following reports of a large fight on the platform.

‘Three men, aged 18, 21 and 22, were arrested in connection. They have been released under investigation while enquiries continue.

‘A 21-year-old man was taken to hospital where he received treatment for a broken nose.

Do you know anyone involved…? Email tips@dailymail.com 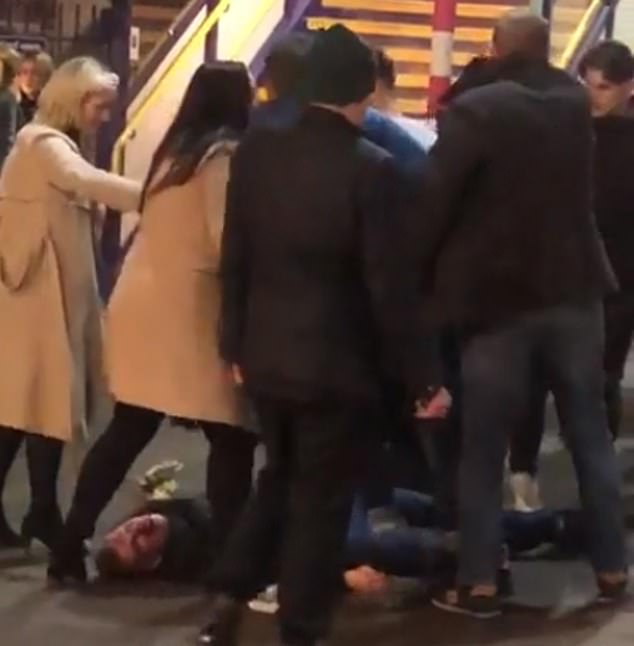