Dramatic footage capturing a two-car crash on a rainy night has sparked a fierce debate online over who was at fault for the heavy collision.

Dash cam footage from Sunday night shows the vehicle driving along an Australian highway around 6.40pm when the vehicle to its right pulls out in front.

The dash cam motorist slams on their brakes, skidding along the wet road before smashing into the side of other vehicle.

A debate has erupted over the 20 second clip, which was shared to Facebook.

The dash cam motorist slams on their brakes, skidding along the wet road before smashing into the side of other vehicle

‘When its raining you should reduce your speed to 2kmh dash cam drivers fault for driving in rain,’ one user commented.

‘I’m just going to throw this one out there, and I realise that I’m probably going to get a lot of hate for it, but I’m going against the grain and blame the car that turned in front of the cam car. That’s just my opinion people,’ another person said.

Within hours of the video being uploaded it was viewed more than 44,000 times. Hundreds of people have chimed in with who they believe was at fault.

The caption of the video says that both cars were written off.

It said the driver appearing to be at fault took out a water main and a few restaurants had to be evacuated. 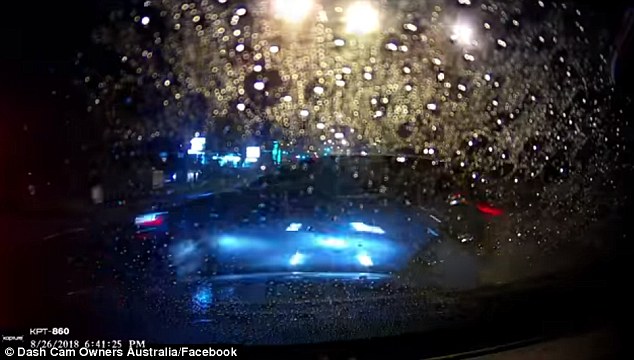