Police officer is relieved from duty after PUNCHING a woman at Miami Airport when she shouted ‘you acting like you’re white, but you’re really black’

Shocking video footage has emerged of a police officer punching a woman in the face at Miami International Airport.

The startling assault was filmed on an officer’s bodycamera and shows an unnamed Miami-Dade Police Department officer punching a woman on Wednesday evening.

The clip shows a woman facing two officers and yelling at one of them, before getting close to his face.

‘I really should. You black, you acting like you’re white but you’re really black. What’re you gonna do?’ the woman, who is black, says getting close to the officer near his chin.

Suddenly the cop snaps and punches the woman in the face. He then throws his hands on her and brings her to the ground as officers in the background shout ‘Woah, woah’. 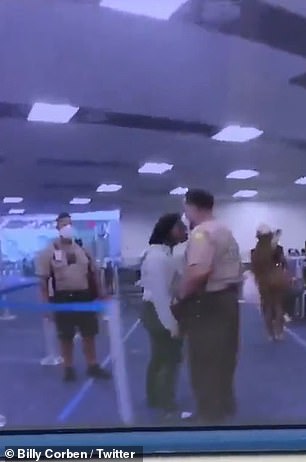 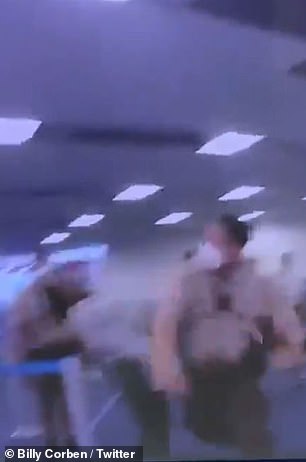 The clip shows a woman facing two officers and yelling at one of them, before getting close to his face. She said: ‘You acting like you’re white but you’re really black. What’re you gonna do?’

A second officer rushes to take the two apart, as does the officer behind the bodycamera recording the incident.

In the clip the officer who punched the woman is heard claiming ‘she headbutted me.’

It’s not clear what the argument was about.

One law enforcement source said the woman was complaining loudly about a missed or delayed flight.

A ticket agent called police and an officer arrived to try to calm her, but a confrontation escalated into violence and with her being pushed to the ground.

Several sources identified the officer as Antonio Clemente Rodriguez, a black officer of Puerto Rican heritage, who was stationed at the airport, according to the Miami Herald.

The video surfaced on social media leading Miami Dade Police Department Director Alfredo Ramirez to announced an investigation into the incident. He said that he ordered for involved officers to be relieved of duty. 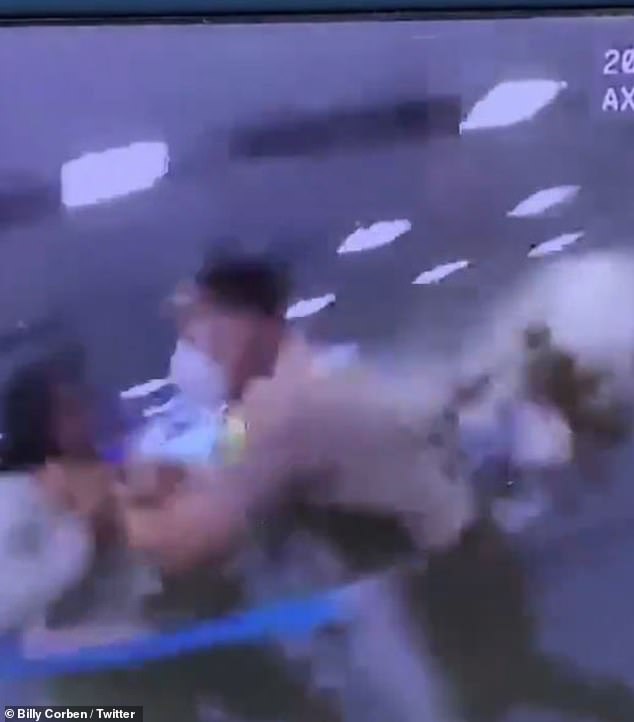 The officer punched her in the face then pushed her to the ground. Two nearby officers then ran to break up the confrontation 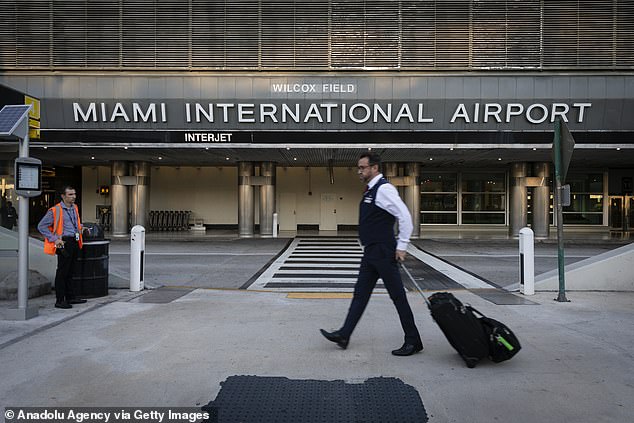 One law enforcement source said the woman was complaining loudly about a missed or delayed flight, leading a ticket agent at the airport to call police, leading to the confrontation

‘I am shocked and angered by a body cam video that I just saw involving one of our officers. I’ve immediately initiated an investigation and ordered that the involved officers be relieved of duty,’ he said.

‘Actions such as these undermine the hard work that we have invested in our community and causes my heart to break for our community and for the vast majority of our officers who dedicate their lives to serving our County. This will not stand, and I assure our community that any officer acting in this vain will be held to account,’ he added.

The officers involved in the incident and the woman have not been named.

The president of the Miami-Dade Police Benevolent Association said the officer hit the woman with an ‘open-hand slap,’ which is sometimes called a ‘diversionary strike.’ 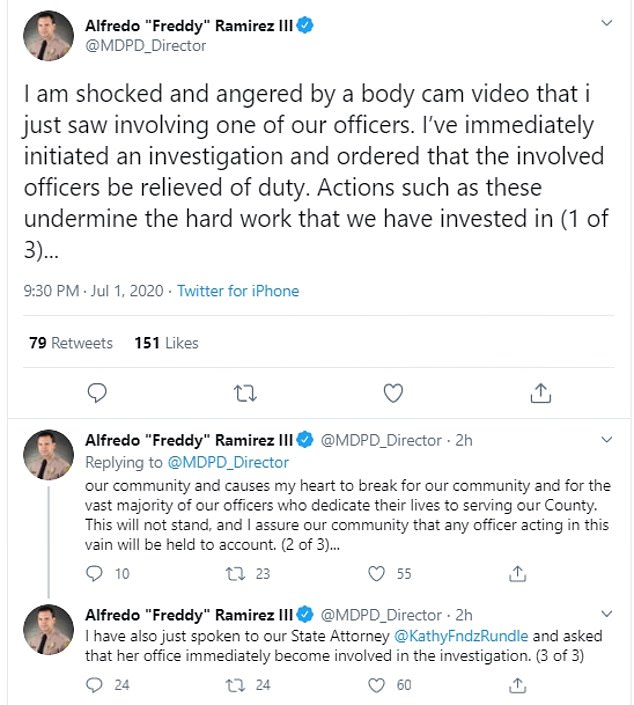 Miami Dade Police Department Director Alfredo Ramirez condemned the attack and ordered for an investigation. He said the police officers involved have been relieved of duty

Mayor Carlos A. Gimenez slammed the video as ‘appaling’ and an ‘unncessary excessive use of force’

‘Clearly she was the aggressor. She was being asked to leave. She’s being belligerent and she pushes her face right into his face,’ PBA President Steadman Stahl said.

The incident emerged in the wake of national protests decrying police brutality against black people and the death of George Floyd at the hands of a white cop in Minneapolis on May 25.

Some protests have escalated into clashes with police. In South Florida, two police officers have been arrested in battery cases since the protests emerged.

Mayor Carlos A. Gimenez slammed the video as ‘appaling’ and an ‘unncessary excessive use of force’.

‘That’s NOT what our @MiamiDadePD are trained to do. @MDPD_Director Ramirez has ordered the officer relieved of duty & investigation is underway. This is why I instituted body cameras & MDPD is reviewing all footage.’