This is the shocking moment a man suspected of stealing a car that was left running with a sleeping baby inside handed over the infant to a gas station clerk while shouting, ‘Take the baby! Take the baby!’

CCTV footage shows the suspect in a white tank top and dark pants pulling up at the Sunoco station in Royal Palm Beach at around 4am Tuesday before unstrapping the child from the back and running towards the on-site restaurant.

Michelle Ashby, who owns the outlet, said the man knocked on the door and handed the five-and-a-half-month-old baby to a night worker before driving off in the stolen black Kia Rio.

‘[The clerk] said the suspect appeared to be scared and in a hurry when he knocked on the door,’ Ashby told the Palm Beach Post.

Officers believe the Kia was stolen from another gas station six miles away while the baby’s mother was outside the vehicle.

The suspect on the CCV then drove six miles to the Sunoco station before passing the baby to the night worker, who phoned 911. The baby was reunited with his mother 30 minutes later.

Police found the Kia at Sansbury’s Way and Okeechobee, but the suspect was still at large on Tuesday afternoon. 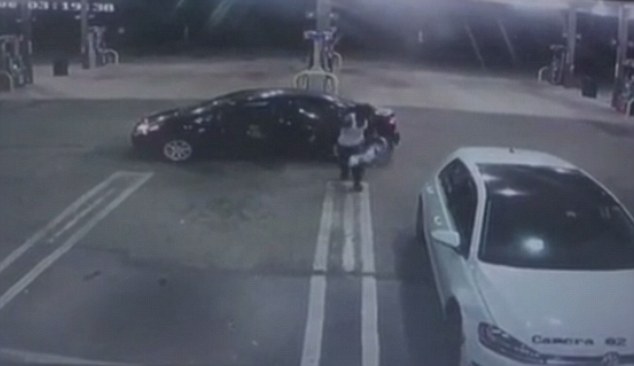