Shocking footage has captured the moment a wild brawl broke out in the heart of Sydney’s CBD with revellers exchanging kicks and punches – before one man allegedly stabbed two others with a knife.

Handheld vision showed a group of men facing off and throwing punches at each other on Saturday night on the pavement at the corner of George and Liverpool Street before the fight spilled out into the middle of the road.

The footage showed one man who appeared to be injured lying on the side of the road as a voice yells out ‘he just got stabbed bro’. 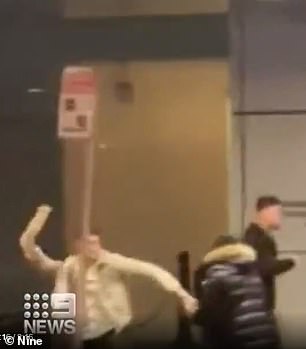 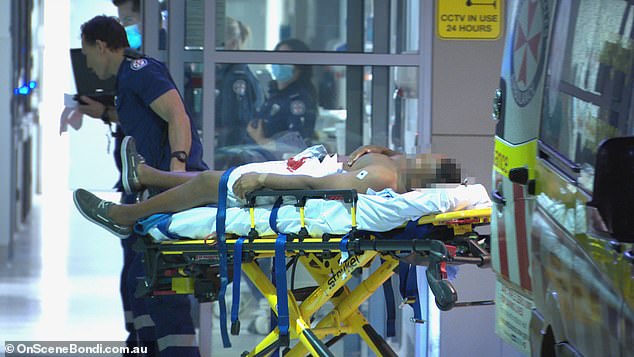 New South Wales Police were called to the scene about 11.45pm and found two men, aged 25 and 28, suffering from stab wounds.

A police spokesman said the brawl involved as many as 16 people.

The younger man suffered a stomach wound and was taken to St Vincent’s Hospital in a critical condition where he has undergone surgery.

The older man meanwhile suffered a back wound and was taken to Royal Prince Alfred in a critical but stable condition.

He has since been released. 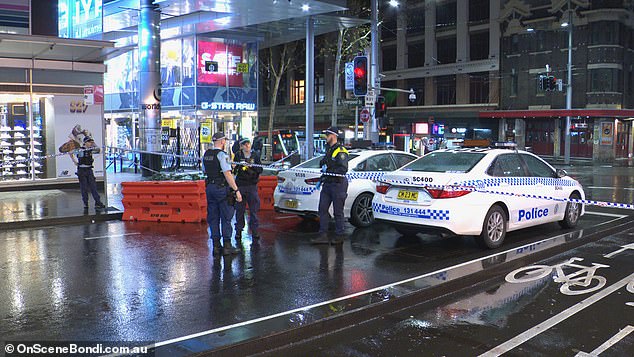 Police are pictured at the scene. An 18-year-old man has been charged with multiple offences including wounding with intent to cause grievous bodily harm

The younger man was charged with wounding with intent to cause grievous bodily harm, having custody of knife in public place, affray and wielding a knife in a public place.

The other man spent the night behind bars but was released without charge.

He has been refused bail to appear at Central Local Court on Monday.