With the First World War came an increasing need for a solution for facial injuries.

And by 1917 the first skin graft had been performed by a doctor from New Zealand who reconstructed the face of a man burnt during combat.

Sir Harold Gillies used a technique called Tube Pedicle Flaps to take skin from the forehead or the chest and swing it in to place without cutting it entirely from the body.

A British sailor named Walter Yeo had been horribly burned in combat. His nose was shattered and his eyelids removed.

Using skin from Yeo’s neck and upper chest, Sir Gillies made a mask of skin that he transplanted across Yeo’s face.

This helped repair the damage that had been done, hiding his disfiguration and allowing him to close his eyes.

The absence of antibiotics meant skin could not be removed from another part of the body such as the leg to then be placed on the face.

Instead the skin was cut away, while remaining attached, and stitched in to a tube shape to ensure blood still flowed and risk of infection was reduced.

Over time the new tissue fused with the old to form a new layer of skin over the wound and these photographs of men at London’s King George Military Hospital show the improvement the technique made.

Photographs taken at London’s King George Military Hospital between May 1, 1917 and May 13, 2018 show the recovery of this soldier with the surname Field. In fact, just a year after reconstructive surgery begins, he has recovered enough to be able to hold a cigarette between his lips – despite the fact his bottom lip had previously been blown away 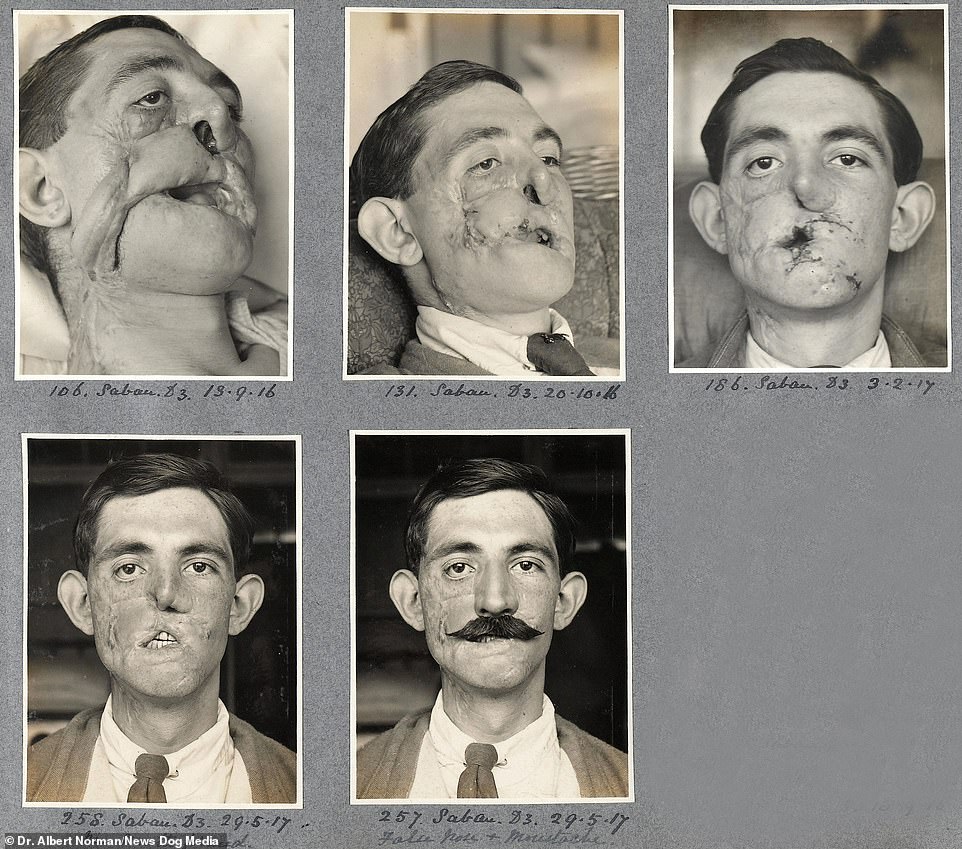 When the entire bottom left-hand side of his face was blown away by a shell this soldier, with the surname Sabau, had to have skin grafted on to his cheek using the tubed pedicle flap. In the first photo the tube can be seen as skin has been taken from his neck and brought up to his cheek. In a final photo, taken in May 1917, Sabau has on a moustache and a fake nose to attempt to hide the remaining scaring. The final two photos are taken on the same day showing Sabau as he looks normally, and how a moustache and nose accessory hide the majority of his scarring. A comment underneath the final photograph notes: ‘fake nose and moustache’. Though his left eye is sightly more drooping than the right he looks almost entirely healed 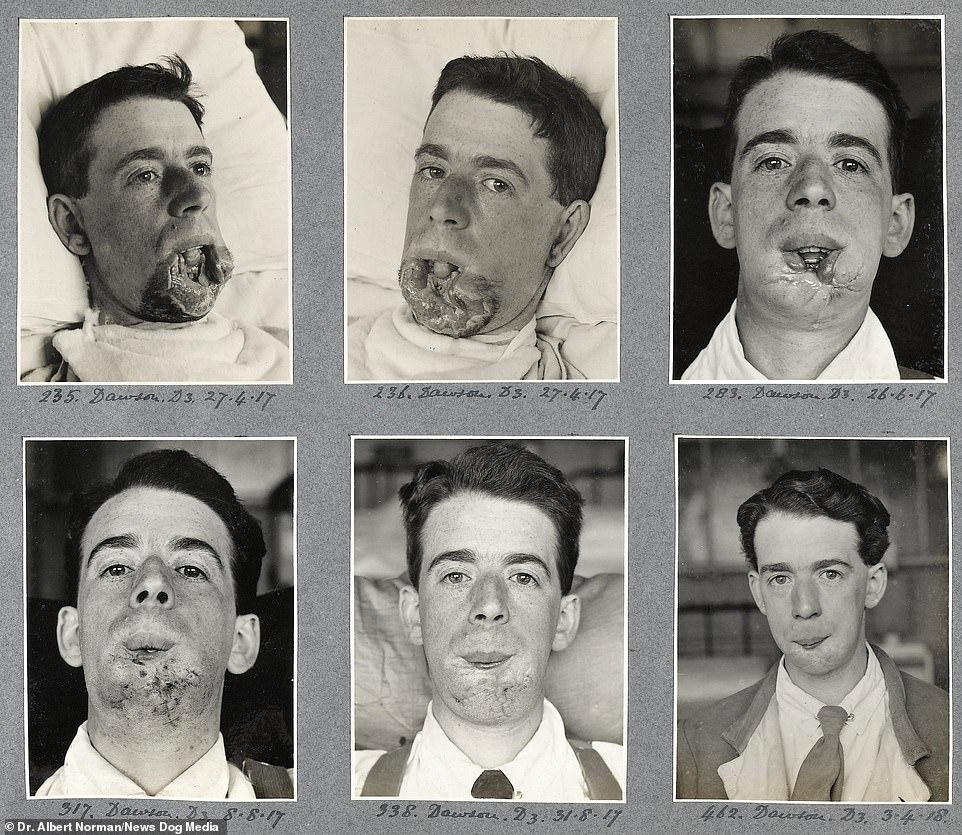 This soldier, named Dawson, completely lost his chin and bottom lip when he was injured in early 1917. But despite having a gaping wound when the first photograph was taken on April 17, 1914 by the same month the following year all that reveals he ever had any surgery at all is a slightly smaller bottom lip. The wound has entirely healed and only limited scarring can be seen 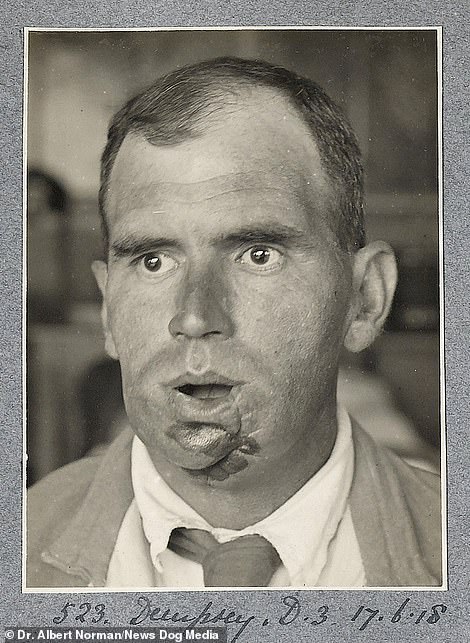 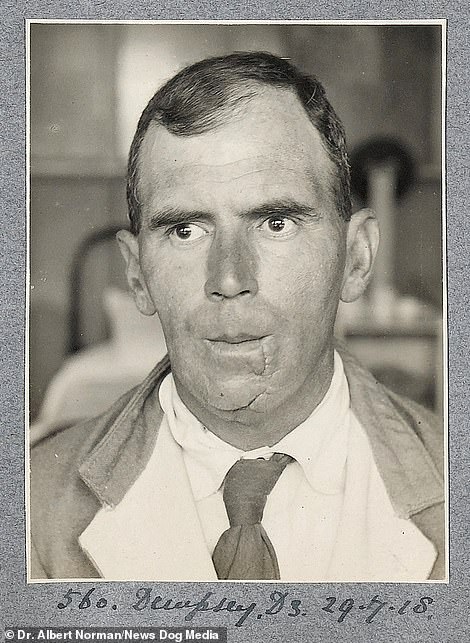 A First World War soldier with the surname Dempsey shows his recovery after a stay at London’s King Gorge Military Hospital between June and July 1918. Skin that was previously swollen and darker has cleared up with just limited scaring still visible. Sir Harold Gillies had the help of pioneering cleft palate surgeon Sir William Arbuthnot Lane to develop the technique 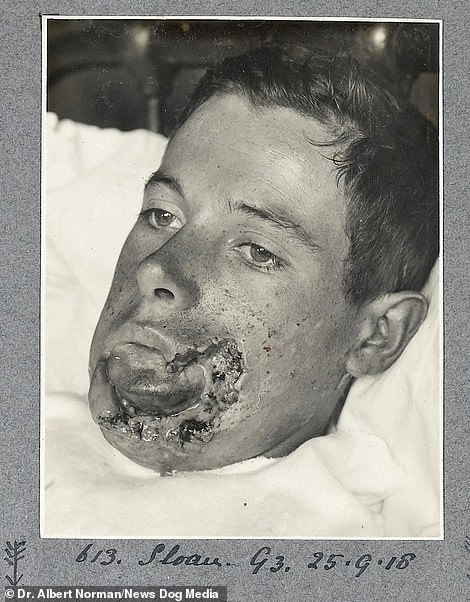 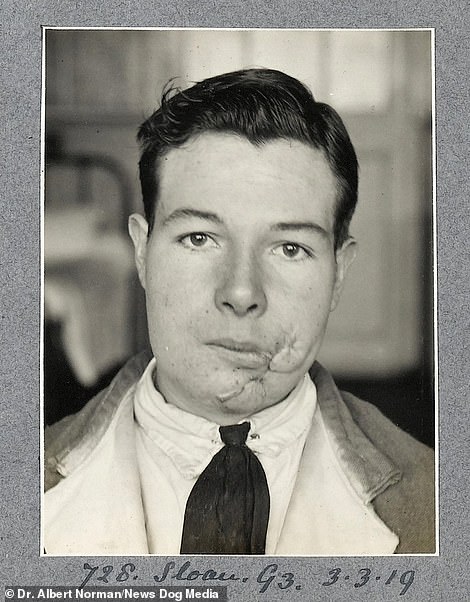 Sloan shows his recovery after a stay at the hospital between September 1918 and March 1919. Where his flesh had been left exposed in the first photograph the wound seems entirely healed just six months later. For those carrying out these procedures during the first world war it was important to try to let the wound heal as much as possible before surgery 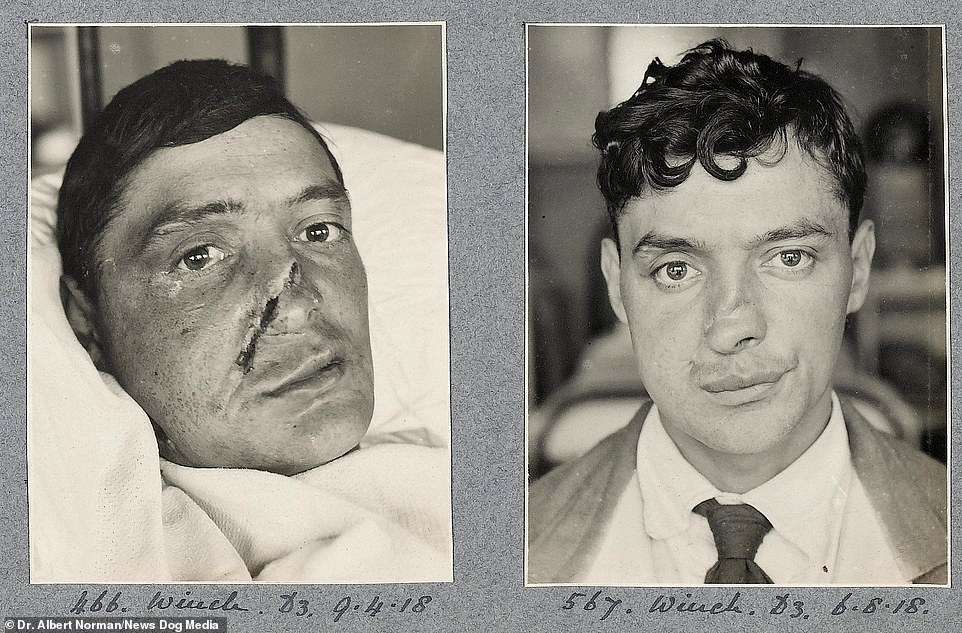 Winch has suffered a large injury to his nose. It could be that a bullet grazed the side of his face but it is unknown what caused the wound. Just four months after receiving treatment for the injury it has been reduced to a slight scar and a disfigured nose. Sir Harold Gillies was knighted in 1930 for his pioneering work with facial reconstruction surgery during the first world war

A soldier with the surname Spiuk was photographed May 6, 1918, July 31, 1918 and October 21, 1918. By the final photo his injury, which had left him with no bottom lip, has healed to the extent that he can hold a cigarette in his mouth. The remains of the tubed pedicle flap can be seen over his bottom lip as the skin from another part of his face was stitched over his wound 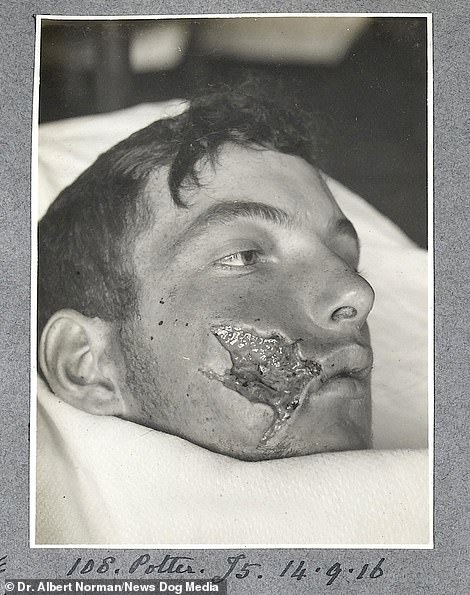 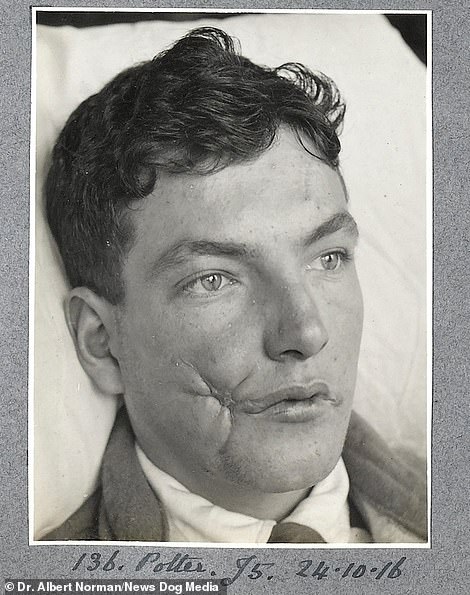 Potter was photographed in 1916 when his wound has been covered up by the remaining skin around the wound. Although a section of his right cheek had been completely blown away in the first photograph, by the time his treatment at the hospital had finished the wound has healed leaving behind a star shaped scar. At the outbreak of war in 1914 Sir Harold Gillies joined the army and while in France rapidly became aware of the horrific facial injuries sustained in trench warfare

Taylor’s lip injury is healed in four months after the pioneering technique of the tubed pedicle flap was used. While in France Sir Gillies saw the work of the dentist and oral surgeon Charles Valadier and the French surgeon Hippolyte morestin (aka ‘The Father of the mouths’) as they worked to help soldier’s whose faces had become disfigured by shrapnel 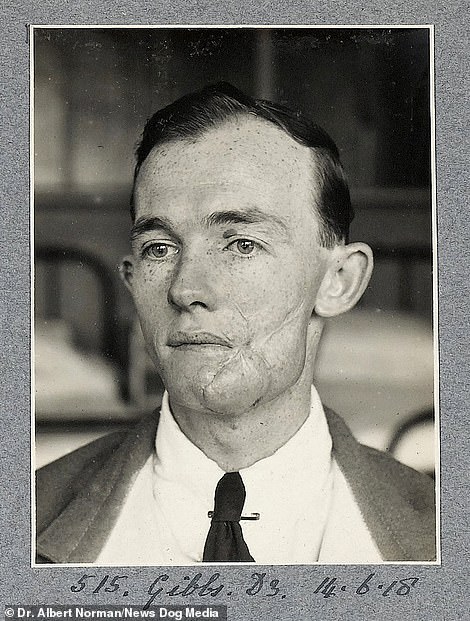 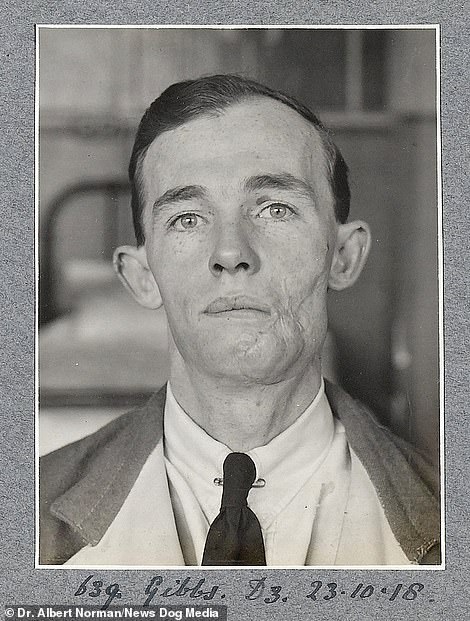 These two fairly similar looking photos were taken four months apart to document Gibbs’ recovery from surgery in 1918. Facial surgeons were dealing with the major loss of soft tissue and bone as well as infection. On his return from France Sir Gillies told the War Office they needed to provide a facility to deal with facial injuries and, with the help of pioneering cleft palate surgeon Sir William Arbuthnot Lane, he was allocated beds at the Cambridge Hospital, Aldershot

This man was left unable to close his mouth after he was injured in 1917. But after surgery he was not only able to close his mouth but could even smile for the update photograph was taken on August 6, 1918. Due to an absence of antibiotics skin could not be taken from other parts of the body. Instead it was partly cut away from the forehead or chest, sewn in to a tube shape and allowed to grow before being connected to the part of the face that was wounded and gradually left to heal

Sergeant Marsden suffered burns to his face and hands after a shell blast. His skin was left completely blackened by the heat of the explosion. But these photographs, taken between June 22, 1916 and September, 7, 1916 show the speed of his face’s complete recovery. The tubed pedicle flap method was not used for the first time until 1917 when Sir Gillies operated on a sailor who had received horrific burns in the battle of Jutland in October of that year 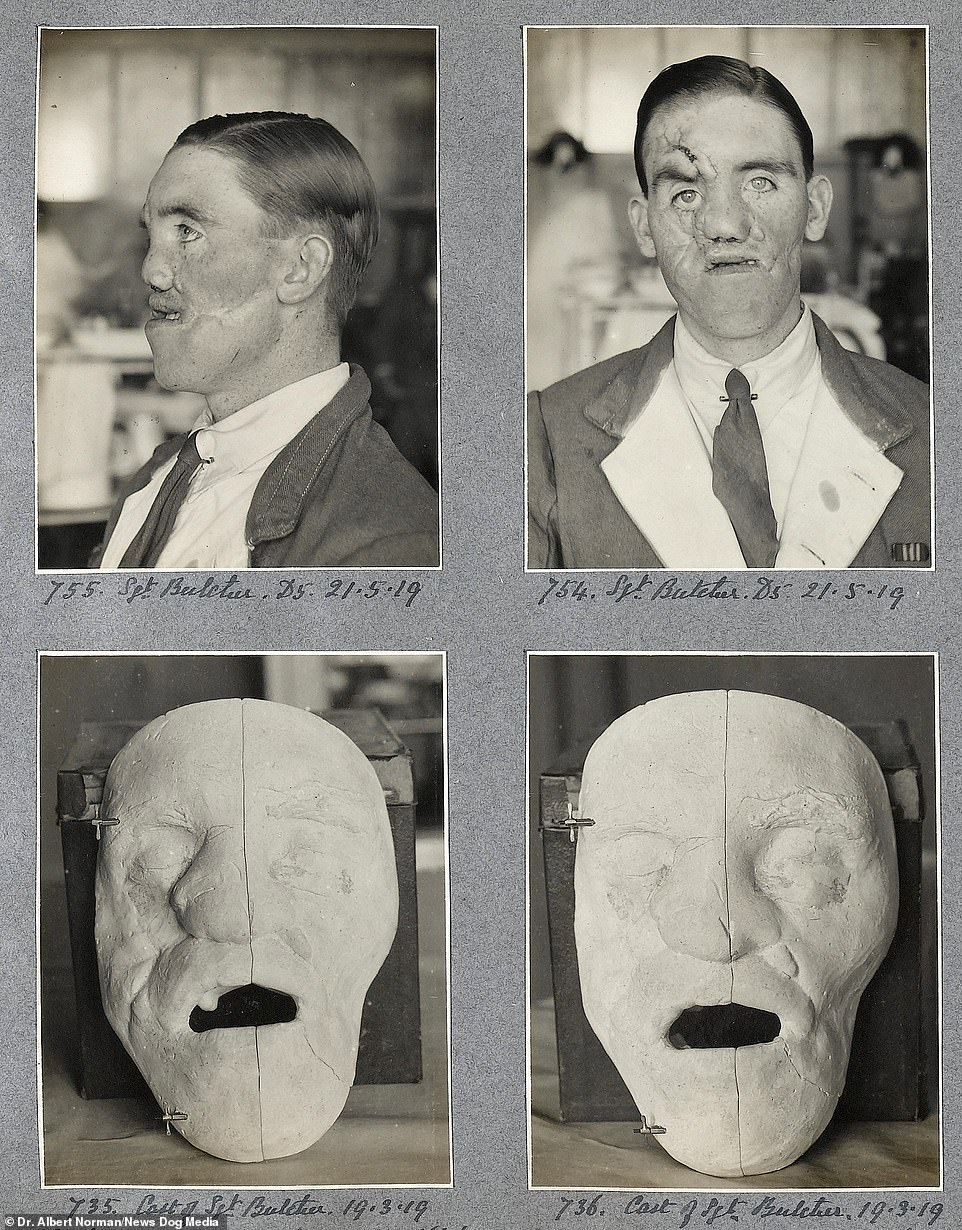 Sergeant Butcher pictured in 1919. Gillies realised 3D imaging could transform the work of the plastic surgeon. A team of sculptors were brought to Sidcup to make plaster casts of the men’s faces. Artificial ears, noses and chins were added before surgery to show how a soldier’s face might look after the operation 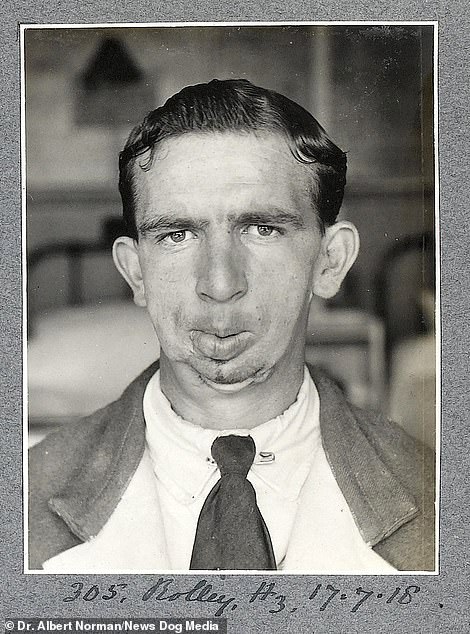 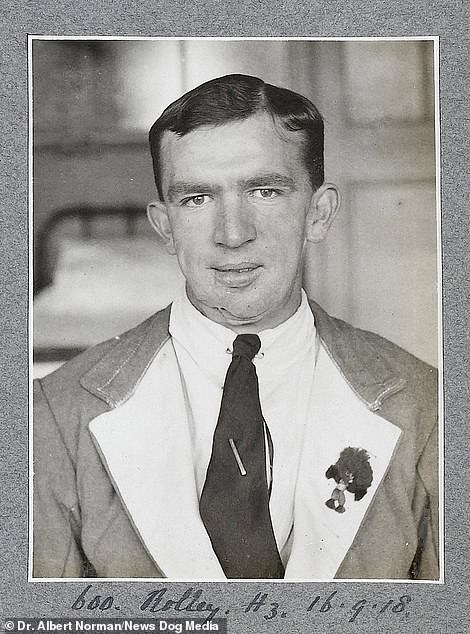 Before and after: A hit from shrapnel destroyed this man’s face before plastic surgery was used to repair his chin. After time has passed Nolley cannot hide his smirk as he shows the effect of the pioneering surgery. Sir Gillies published a book called Plastic Surgery of the Face in 1920 to show and celebrate the effects of his research and work during the war. London’s King George Military Hospital was set up between 1915 and 1919. The building had just been built as a five-storey warehouse for the H.M. Stationery Office in Stamford Street and Cornwall Road before being used as a Red Cross military hospital